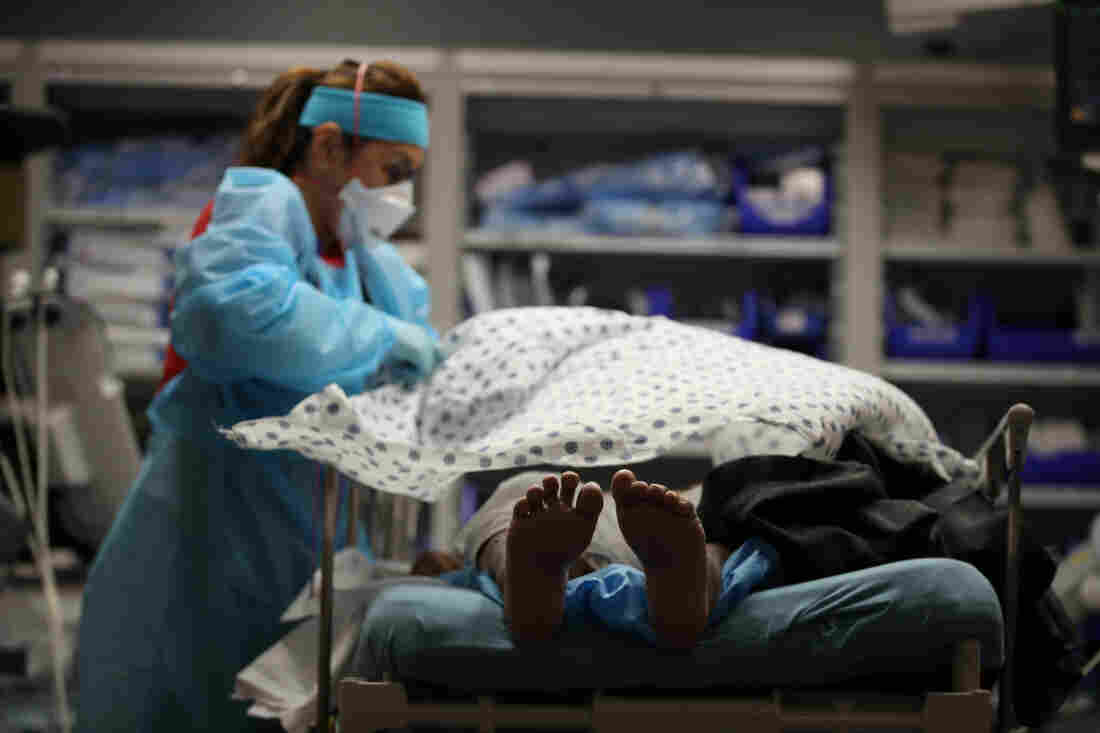 A nurse places a blanket over a patient that had just been admitted to the emergency room at Regional Medical Center in San Jose, California. Justin Sullivan/Getty Images hide caption 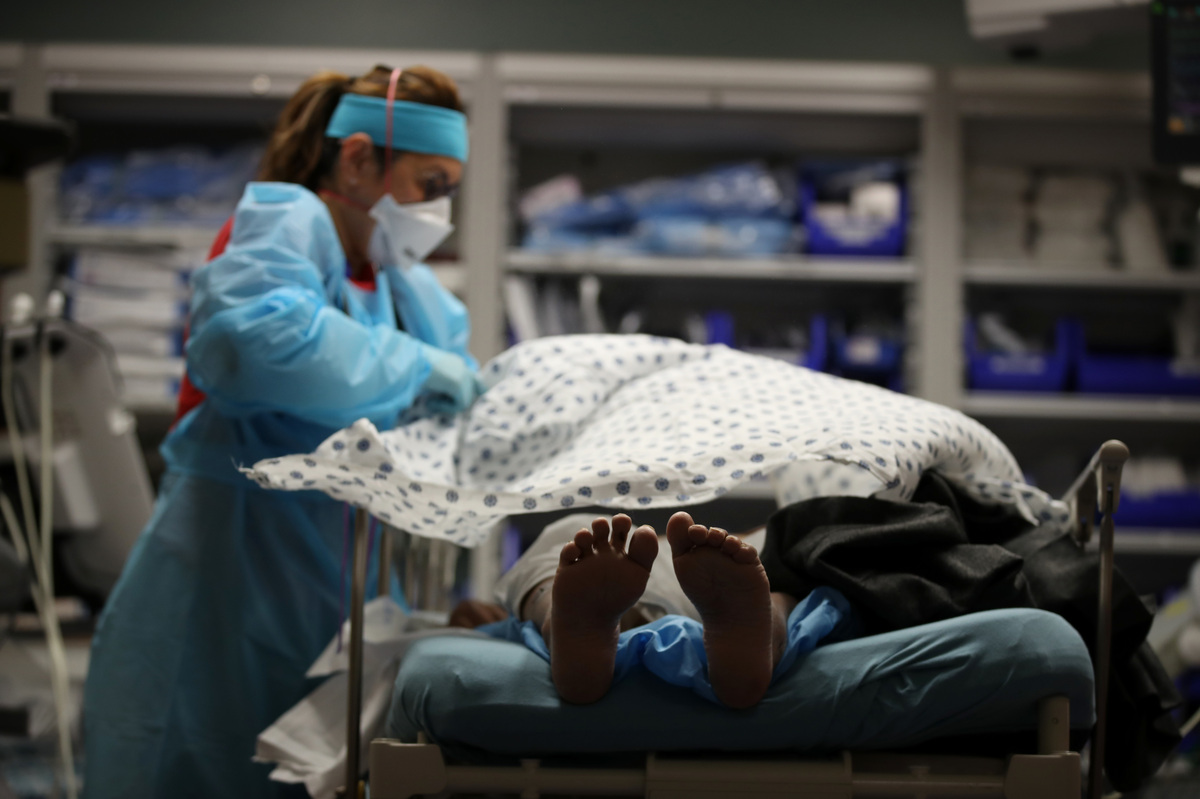 A nurse places a blanket over a patient that had just been admitted to the emergency room at Regional Medical Center in San Jose, California.

The number of hospitalizations from the coronavirus reached nearly 77,000 on Tuesday — a new record. For the country's nurses, the surge is taking a heavy toll, as they grow exhausted, worried and frustrated by disinformation and disregard for safety.

Some eight months into the crisis, nurses have been taking to social media, describing grim scenes at work and imploring Americans to stay safe as hospitals reach capacity limits. Nationwide, hospitalizations have been steadily climbing, with the Midwest and the South hit especially hard. In the last week alone, each has seen a roughly 35% spike in hospitalizations, according to the Covid Tracking Project.

Amid an outbreak in El Paso, Texas, nurse Ashley Bartholomew decided to leave the job for the sake of her mental health. She had been treating people who were very sick with COVID and on Twitter, she described trying to convince even them that it was a real virus.

"It reminds me of like when I was in the military. It's kind of like well, did I just quit in the middle of a deployment? Did I quit in the middle of the war? Like that's almost how it feels," Bartholomew told NPR's Morning Edition. "It's also impossible for nurses to fight the pandemic on misinformation and also fight the pandemic of COVID at the same time."

I’m an RN in El Paso and was recently transferred from the OR to COVID ICU.

I resigned from my job last week and I’ve been asked several times, “What was the breaking point?” I don’t know a specific one, but I’ll share this: a thread 🧵1/

"We're seeing the worst of the worst and these patients are dying, and you go home at the end of the night and you drive by bars and you drive by restaurants and they're packed full and people aren't wearing masks," said Michelle Cavanaugh, a nurse at the Nebraska Medicine Medical Center in Omaha. "I wish that I could get people to see COVID through my eyes."

In Minnesota, ICU nurse Mary Turner worries about running out of stamina and supplies, including personal protective equipment.

"It'd be like a death sentence, and I know that sounds dramatic, but it is truly the case that the frontline health care workers every day are risking their lives," she said.

At the Mayo Clinic Health System in Eau Claire, Wis., nearly every hospital bed has been full for the past three weeks. Pam White, the chief nursing officer there, says it's weighing on her staff.

'You Can See The Regret': ICU Nurse On Patients Who Failed To Take COVID Precautions

"It is real. I see it in the eyes and hear it in the voices of our nurses every day," she said.

White manages roughly 2,300 nursing department members in the Mayo Clinic's hospital system in northwest Wisconsin. It includes five hospitals and 14 clinics. With some hospital staff quarantining due to exposure, the hospital has brought in help from the Mayo Clinics in Arizona and Rochester, Minn. She has even put her own scrubs on to help out. 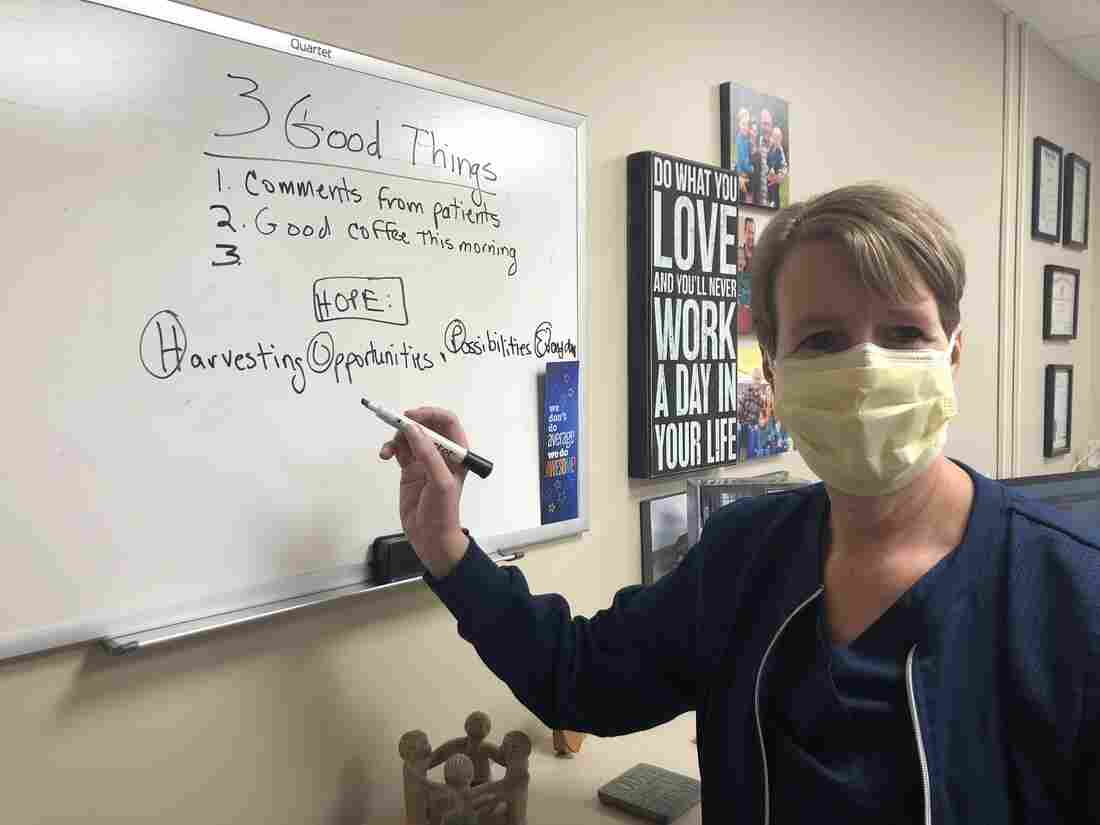 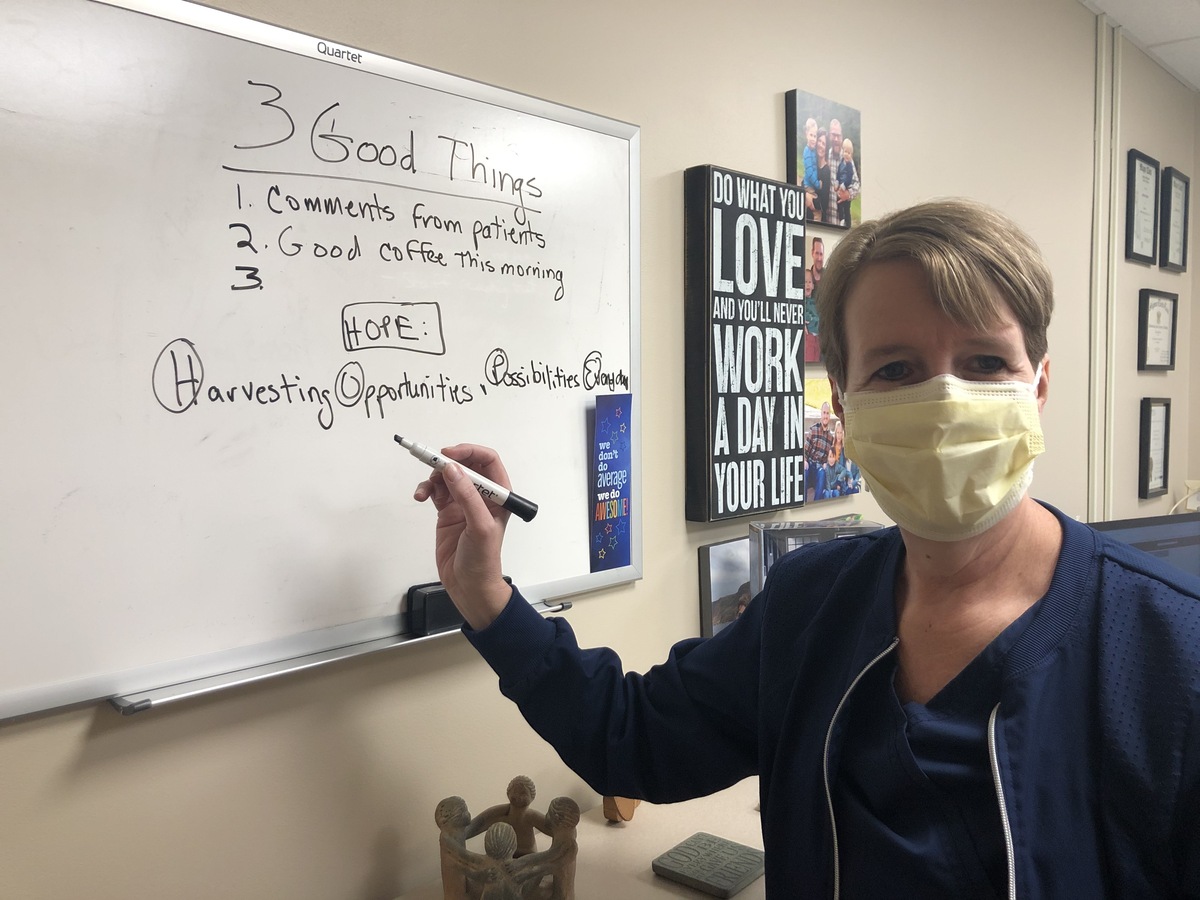 Pam White, chief nursing officer at the Mayo Clinic Health System in northwest Wisconsin, tries daily to remind herself of "3 good things." With the recent surge of COVID-19, White has returned to patient care to help her staff.

With visitors barred from visiting COVID patients, comforting them is left to White's staff. She recalls a nurse who told her about arranging a call to a patient's wife before he went to the ICU. The nurse wondered if that might be the last time he'd be able to speak to his wife again.

"Those are difficult calls to make, and we're doing that over and over again," White said. "I see it in our nurses as they walk out of rooms with tears in their eyes. It's heartbreaking."

As the holiday season approaches and Americans consider joining their family and friends to celebrate, White suggests gathering virtually and creatively instead.

"I've said to my own family, 'I'm sorry we can't get together.' This is one holiday. Let's make it through this holiday so we can have future holidays."