Accessibility links
Trump Shakes Up The Military, But To What End? The president has taken a series of abrupt moves, firing the defense secretary and announcing troop cutbacks in Afghanistan and Iraq. Critics say these actions have no clear strategic goal. 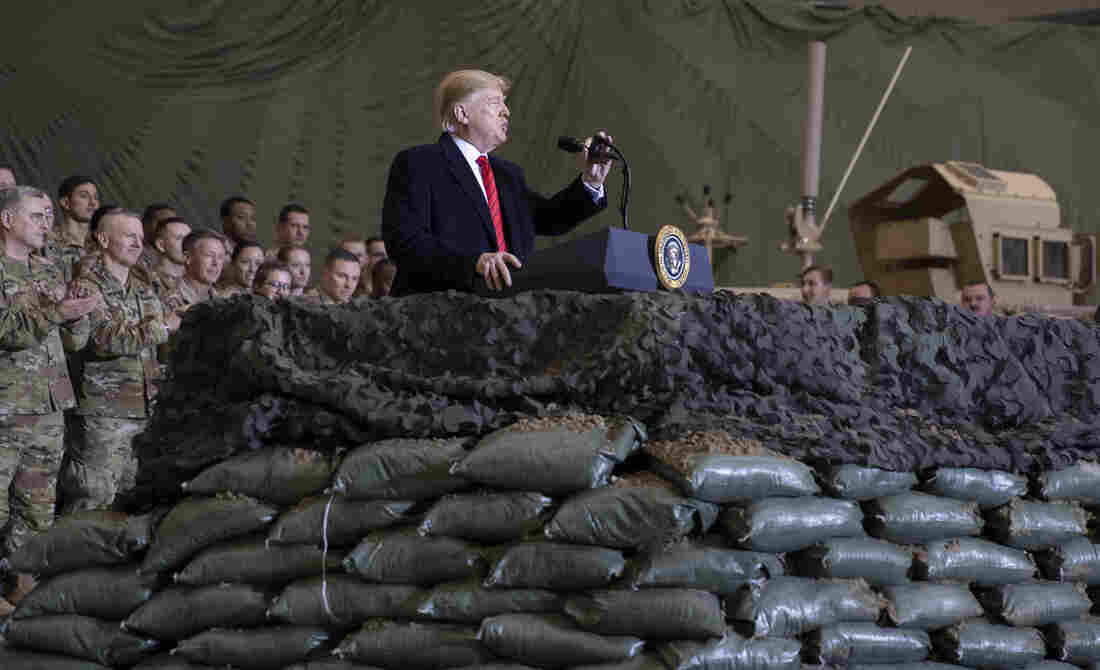 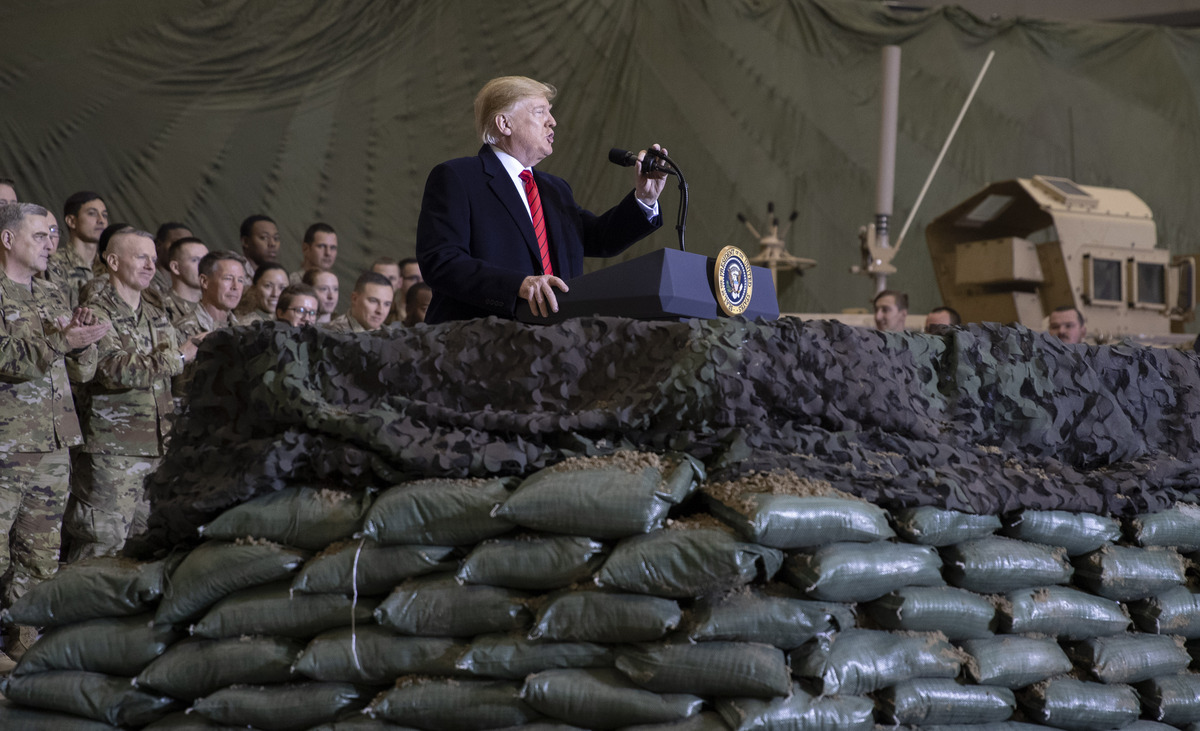 In the past 10 days, President Trump has fired the defense secretary as part of a leadership shake-up at the Pentagon. His administration has announced troop cutbacks in Afghanistan and Iraq. And the president huddled with his national security team and discussed possible military action against Iran.

Critics say the moves appear motivated by anger, revenge and an attempt to keep campaign promises dating to 2016. In addition, they say the president is taking steps that lack strategic coherence, complicate a transition to a Joe Biden presidency, confuse allies of the U.S. and harm America's standing in the world.

Biden's Worldview Calls For U.S. To Be Center Stage In Global Affairs

In the aftermath of the election, "President Trump and those loyal to him started to sow chaos and division," said Rep. Adam Smith, the Washington Democrat who heads the House Armed Services Committee. He called on Trump to stop "firing or forcing out national security professionals," adding that the next two months could be "precarious at best and downright dangerous at worst."

Here's a breakdown of what Trump has done in recent days — and what it could mean when Biden becomes commander in chief on Jan. 20.

Defense Department leadership: Trump soured on Defense Secretary Mark Esper months ago, and Esper's opposition to further troop cuts in Afghanistan sealed his fate. Trump fired Esper in a Nov. 9 tweet and replaced him with Chris Miller, a counterterrorism official who has a long military background, though limited experience in running a huge bureaucracy like the Pentagon. In addition, several other Trump loyalists, who supported troop cuts or were hawkish on Iran, were installed in top Pentagon jobs, a highly unusual move in the waning days of an administration.

Biden will choose his own defense secretary and other senior military advisers, but Trump's moves add layers of uncertainty to the transition.

Afghanistan: Barely a week on the job, Miller announced Tuesday that the U.S. would cut troops in Afghanistan from 4,500 to 2,500 by Jan. 15. Based on a preliminary agreement reached by the U.S. and the Taliban in February, U.S. troop levels have been coming down.

But U.S. military officials say the Taliban has failed to meet its commitments, which include a halt to attacks in urban areas and breaking with al-Qaida.

One military official told NPR the cuts were "capricious and arbitrary," although another called them "the best possible alternative," since Trump had earlier tweeted that all U.S. troops should be home by Christmas.

The president faced criticism from some of his staunchest supporters, like Senate Majority Leader Mitch McConnell, a Kentucky Republican.

"A rapid withdrawal of U.S. forces from Afghanistan now would hurt our allies and delight the people who wish us harm," McConnell said.

The Taliban on Wednesday welcomed the Pentagon's announcement, calling it a "good step."

Defense analysts predicted the troop cuts in Afghanistan will undermine the current peace talks involving the U.S., the Afghan government and the Taliban. They say the U.S. drawdown could give the Taliban more leverage and encourage the group to simply wait the Americans out rather than offer any concessions.

National security adviser Robert O'Brien said the president would like to see all U.S. troops out of Afghanistan by May — though that decision would be left to the incoming Biden administration.

Iraq: Miller also announced Tuesday that the U.S. would trim its forces in Iraq from 3,000 to 2,500. The Americans continue to go after Islamic State remnants there and in neighboring Syria. Shortly after Miller spoke, rockets were fired at the U.S. Embassy and at other sites in Baghdad.

Many analysts said the president's moves in Afghanistan and Iraq appeared designed to fulfill a long-standing promise to end "forever wars," rather than a reasoned and deliberate drawdown.

Compared with Afghanistan, Iraq is a bit more stable and is receiving less attention in the United States. However, then-President Barack Obama withdrew U.S. forces from the country in 2011 at a time of relative calm. He sent troops back in 2014 after the Islamic State emerged and captured large parts of western and northern Iraq.

Biden says that he favors keeping a small number of U.S. forces in the region to focus on counterterrorism.

"There is a big difference between large-scale, open-ended deployments of tens of thousands of American combat troops, which must end, and using a few hundred Special Forces soldiers and intelligence assets to support local partners," Biden wrote in Foreign Affairs in March. "Those smaller-scale missions are sustainable militarily, economically, and politically."

Iran: Last week, Trump and his national security team discussed options for dealing with Iran — including military options. They gathered at the White House after the International Atomic Energy Agency reported that Iran continues stockpiling uranium enriched to low levels. The stockpile is many times larger than permitted under the 2015 nuclear deal that the U.S. has withdrawn from and that Iran openly flouts. Still, Iran would have to take several additional steps before it could make a nuclear weapon.

The president's advisers presented him a range of options but counseled against taking military action, a military official told NPR, speaking on condition of anonymity. The advisers fear a U.S. strike would escalate to a wider conflict, so it appears that any military action is off the table for now.

The president has pursued a "maximum pressure" campaign against Iran that has focused largely on sanctions and other punitive measures. Launching a military attack at the same time the U.S. is scaling back in the region makes little sense, according to Karim Sadjadpour, an Iran expert at the Carnegie Endowment for International Peace.

Also, former national security adviser John Bolton was a leading proponent of toppling the Iranian regime when he was part of the administration. But in an interview with NPR last week, Bolton acknowledged that Trump always rejected regime change.

"I think the only way to guarantee that Iran does not become a nuclear weapon state is to remove the regime. And the president was never willing to take that as his policy," Bolton said.

Biden says he would be willing to return to the 2015 nuclear deal if Iran agreed to go back and accept the original restrictions.

"We have been in Afghanistan for almost 20 years, and no NATO ally wants to stay any longer than necessary," Stoltenberg said in a statement. "But at the same time, the price for leaving too soon or in an uncoordinated way could be very high. Afghanistan risks becoming once again a platform for international terrorists to plan and organize attacks on our homelands."

Trump has repeatedly quarreled with NATO over his demand that member countries spend more on defense. Biden says one of his first foreign policy moves will be to repair frayed relations with long-standing allies of the U.S., including NATO members.