Accessibility links
Georgia Recount: Vote Count Shows Biden Still Ahead Thousands of workers across the state have counted each ballot to ensure that President-elect Joe Biden did narrowly defeat President Trump in the Nov. 3 contest in Georgia. 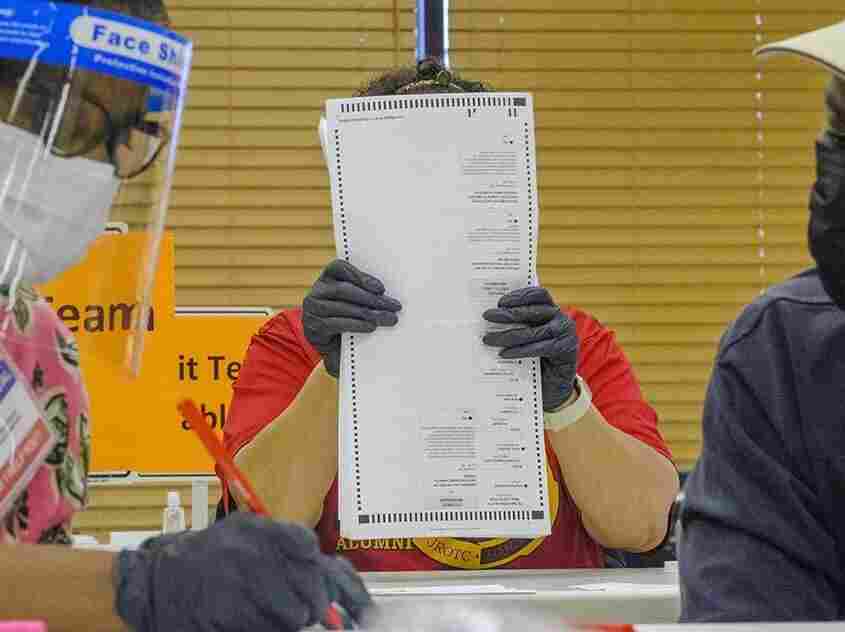 Fourteen auditors began the manual recount of around 71,000 presidential ballots in Macon, Ga., on Friday, part of a statewide recount of about 5 million votes cast across Georgia. Grant Blankenship/GPB hide caption 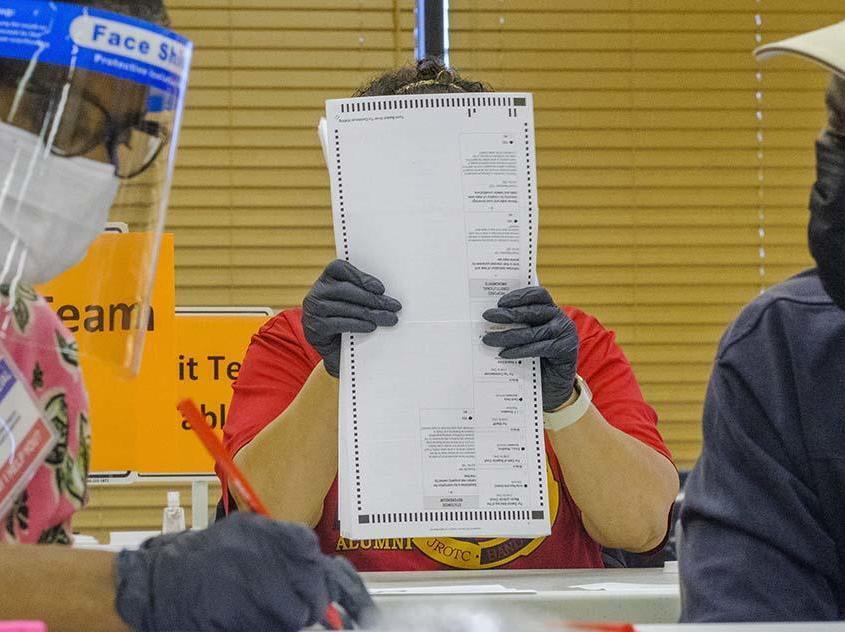 Fourteen auditors began the manual recount of around 71,000 presidential ballots in Macon, Ga., on Friday, part of a statewide recount of about 5 million votes cast across Georgia.

Georgia election officials expect to release the results of a statewide audit by noon Thursday, as a handful of counties finish data entry from a full hand recount of 5 million presidential votes.

Gabriel Sterling with the secretary of state's office said Wednesday afternoon that at least 21 of 159 counties show their risk-limiting audit is still in process, including some of the large jurisdictions in metro Atlanta. The deadline for the audit is 11:59 p.m. Wednesday.

"We cannot do the full quality-control process until all the data entry is in there," he said. "We will likely be having to use every minute of that midnight deadline."

Announcing the hand audit last week, Republican Secretary of State Brad Raffensperger said the recount was necessary because of the close margin of the race.

Since Friday morning, thousands of workers across the state have counted each ballot to ensure that President-elect Joe Biden did narrowly defeat President Trump in the Nov. 3 contest in Georgia. While the risk-limiting audit is designed to check the correct winner and not change the margins, four counties uncovered a few thousand votes that were not originally uploaded to the state's election results. Those votes narrowly cut into Biden's margin but are not nearly enough to reverse Biden's lead.

Douglas County failed to include a memory card from an Election Day precinct that included 156 votes for Biden, 128 votes for Trump, seven votes for Libertarian candidate Jo Jorgensen and two ballots where no presidential selection was made. This brings the margin by which Biden leads Trump to 12,781, after Walton County discovered a memory card with 284 votes, Fayette Country tabulated 2,755 missing votes and Floyd County had about 2,600 ballots that were never scanned.

Trump and other top Republicans have suggested that Georgia's vote counting and risk-limiting audit is fraudulent, something that Sterling of the secretary of state's office said is a ridiculous notion.

"The irony of his saying 'fraudulent votes have been found' — he has gained in the finding of these votes," Sterling said. "So the system is working the way it is intended. And the frustrating situation overall ... if this was 14,000 votes the other way, I believe Biden supporters would be screaming that this was all inappropriate and not done correctly."

Sterling also addressed a Twitter thread from David Shafer, chair of the Georgia Republican Party, that seemed to suggest an error in DeKalb County almost gave Biden an extra 9,000 votes. The social media outlet flagged those tweets as disputed on Wednesday afternoon.

During the audit, one batch of ballots was recorded as containing more than 10,000 votes when the label on the box said just over 1,000. But the error was caught, and according to an affidavit submitted by a Republican audit monitor, the final tally showed a difference of only two votes from the label.

"This is why we don't give out interim audit results, because it can be misleading to look at them because there will be human errors on this," Sterling said. "This was discovered on Sunday, the secretary's office was made aware of it since then and we all knew what had happened here."

As of 4 p.m. ET Wednesday, 5 million ballots had been hand-counted, and the secretary of state's office says the process will finish on time.

The results of the risk-limiting audit and all of the accompanying documents will be posted publicly and will not alter the county-certified totals. State officials said that since the audit is designed to check winners and not margins, the original vote totals showing Biden ahead will stand.

Those four counties that failed to tally all of their votes must recertify, and the state's deadline to sign off on the election results is Friday. While the deadline to complete the audit is 11:59 p.m. Wednesday, state officials say they will not release results until Thursday, after the election staff gets some rest.

Meanwhile, the Trump campaign can still request a machine recount of election results after the state's certification, something that would take at least a week for some counties to complete.

The elections director in Fulton County, Georgia's most populous, told commissioners it could take up to nine days to rescan more than half a million ballots.