Accessibility links
'Fresh Prince' Reunion: Will Smith And 'OG Aunt Viv' Janet Hubert Hash It Out After years of bad blood in the public eye, Will Smith and Janet Hubert finally discuss her acrimonious departure from the show on the special, now available on HBO Max. 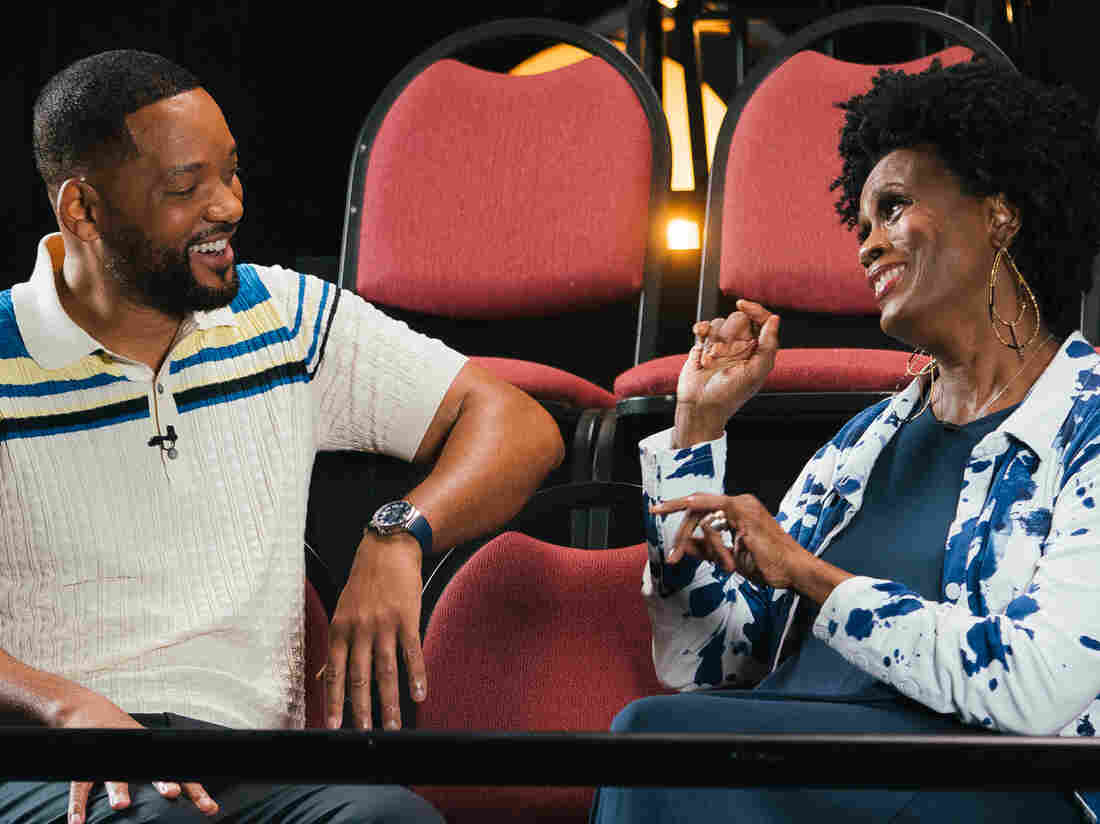 Will Smith and Janet Hubert came back together for the first time in 27 years for The Fresh Prince of Bel-Air Reunion special. Saeed Adyani/HBO Max hide caption 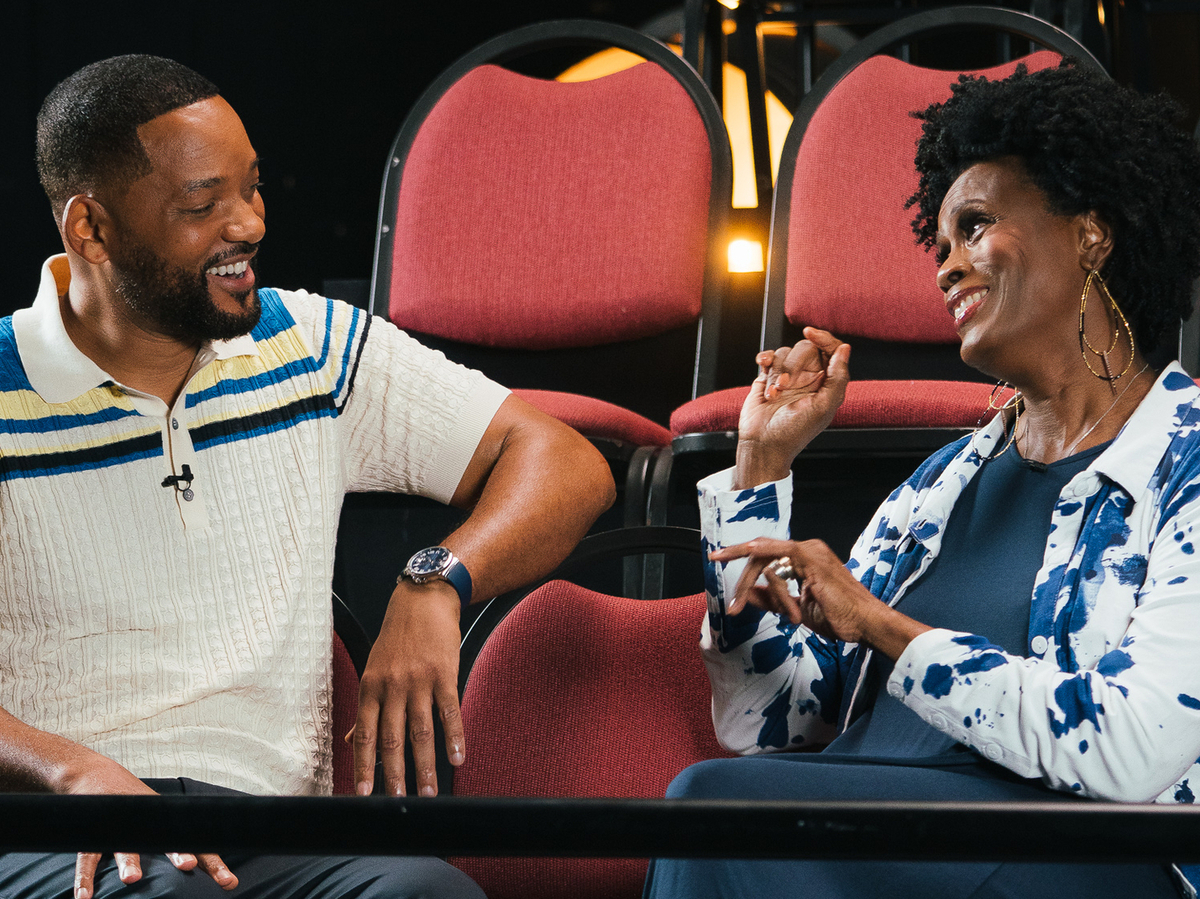 Will Smith and Janet Hubert came back together for the first time in 27 years for The Fresh Prince of Bel-Air Reunion special.

The unspoken rules of gathering the cast of a beloved TV show for a reunion special are familiar: Gin up the nostalgia and warm, fuzzy feels. Montages and clip reels highlight the memorable on-screen moments from years past, as everyone jovially reminisces about the time spent playing and creating together on set. If a key member is absent because of behind-the-scenes drama or personal setbacks, try to avoid acknowledging that the person was ever a part of the show in the first place, and/or gloss over any tensions that might spoil the lovefest. Put on a happy face.

But then, right around the 45-minute mark (and immediately following a genuinely moving tribute to the late James Avery, who played the show's indelible patriarch, Uncle Phil), this Fresh Prince reunion dispenses with rules and pleasantries to address the giant elephant in the room — the highly publicized fallout between Smith and Janet Hubert, who was unceremoniously replaced by Reid in her role as Aunt Viv in the show's final three seasons. For the first time in 27 years, Smith and Hubert come together to clear the air.

"It felt like I couldn't celebrate 30 years of Fresh Prince without finding a way to celebrate Janet," Smith tells his castmates, before showing them, and us, video of their pre-taped meeting.

What's most striking about their exchange is how familiar Hubert's story is for women in the workplace. During the third season, when she became pregnant, she says, she was facing challenges in her personal life (her then-husband was abusive and unemployed), which indirectly bled into how she approached her work on set. Hubert says that this led to the much more powerful Smith painting her on set and in the media as someone who was "difficult" to work with and that she was told he was responsible for her being forced out. When she was offered a new, restrictive contract — she would work only 2 1/2 months out of the year, her salary would be cut and she would be prohibited from accepting other jobs outside of Fresh Prince — she refused to accept the offer.

Hubert points out that she was never "unprofessional" on set, only more reserved. It's hard to hear such a revelation and not think of the many ways in which this echoes the corporate mindset of bosses who tout the workplace and colleagues as "family" so as to ignore the fact that, for their employees, this is their livelihood; they deserve to be paid a living wage, to have lives outside of work, to just be human. Smith and his other co-stars talk a lot about how much they enjoyed their experience on Fresh Prince and how it didn't feel like they were doing a job so much as they were part of a tightknit family. That's a heartwarming and admirable kind of environment to exist in, but it's rarely the reality for everyone. And it doesn't leave room for accepting that it's OK to treat your job like it's actually a job, too, especially if your mental health and well-being outside of work are suffering.

Hubert is candid and specific in how this mischaracterization of her attitude and work ethic tarnished her career, particularly as a dark-skinned woman: "Calling a Black woman difficult in Hollywood is the kiss of death." The actress Mo'Nique, among many others, can certainly attest to this, having said she has been blackballed in the industry since refusing to campaign for Precious without the promise of additional pay. ("We got labeled as 'difficult' because I said one word, and that was 'no,' " she told Steve Harvey last year.)

For Smith's part, he admits he was neither "sensitive" nor "perceptive" to Hubert's troubles during her pregnancy and seems genuinely contrite for how he treated her. He also notes that at the time he was still very young and immature and that now, having been married with kids of his own, he has grown to understand what she was up against at that time in her life.

But as Hubert gently but sternly notes, the damage was done, and while Smith was able to move forward and achieve greater and greater success post-Fresh Prince, she has never had that chance: "You took all that away from me with your words. Words can kill." It's a harsh reminder of the power of perception and how so many men are able to wield that power swiftly and devastatingly against women who don't bend to their will.

There's deep sadness to be felt in the profound loss, both for Hubert's career and for the later seasons of Fresh Prince. Her performance as Aunt Viv was groundbreaking in its depiction of a woman who looked like her possessing a range of emotions and attitudes on TV in that era. Hubert could easily glide between saucy and elegant and righteous, often in a single scene.

As unsettling as the circumstances of this conversation are, its existence here is also refreshing. For all the enduring popularity of Fresh Prince and the general goodwill Smith has managed to maintain in the decades since becoming one of Hollywood's biggest movie stars, Hubert's departure has long loomed over the show's legacy. To address it so directly is a smart PR move on Smith's part — if there's any actor working today who exudes the need to please crowds and be liked by everyone, it's him — but it also feels like exactly what Hubert needed in order to provide closure.

And while they may never share the same strong ties as Smith has with the rest of his co-stars, she at least seems at peace. For those few moments, funnily enough, the special feels like an actual family reunion with real stakes, as the estranged relatives awkwardly and uncomfortably confront one another, let it all out and, finally and cathartically, reach reconciliation.