Accessibility links
Some Faith Leaders Defiant, Others Transparent Over COVID-19 Outbreaks Many faith leaders may believe churches are singled out for blame, but one Baptist pastor in Maine called for safety precautions after members tested positive for the coronavirus. 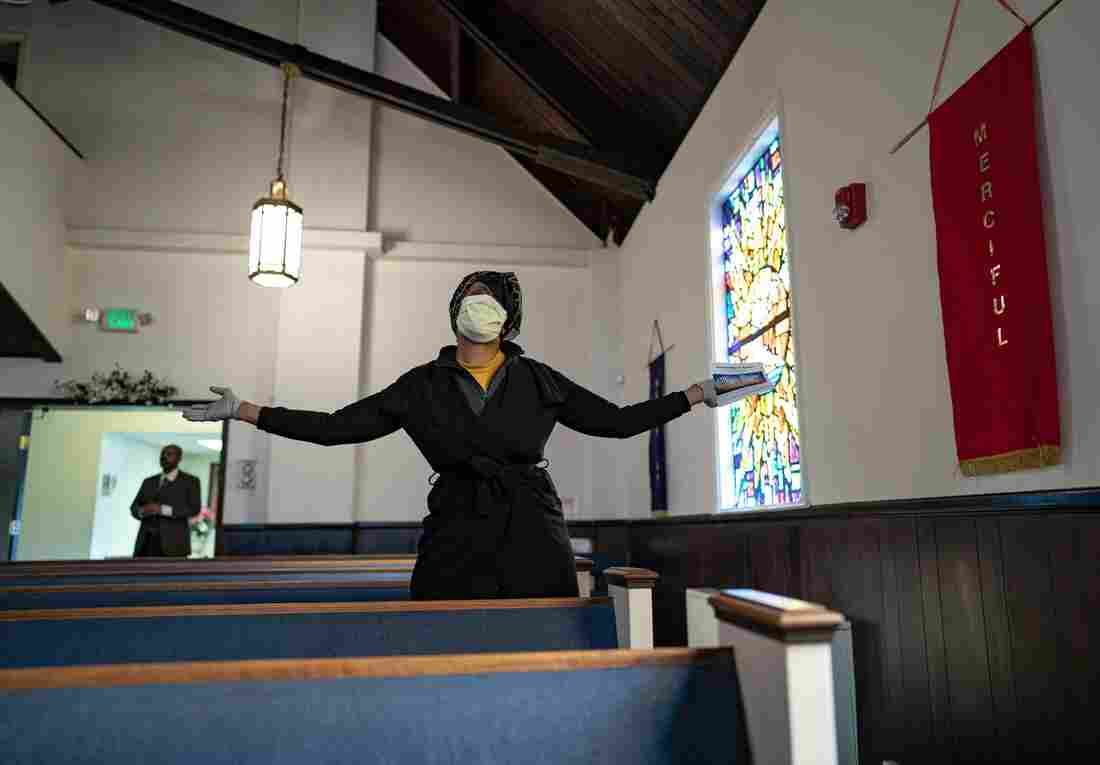 Some churches at the center of COVID-19 outbreaks have shunned attention or responded with defiance, while others have limited crowd sizes and encouraged congregants to wear masks and practice social distancing. Alex Edelman /AFP via Getty Images hide caption 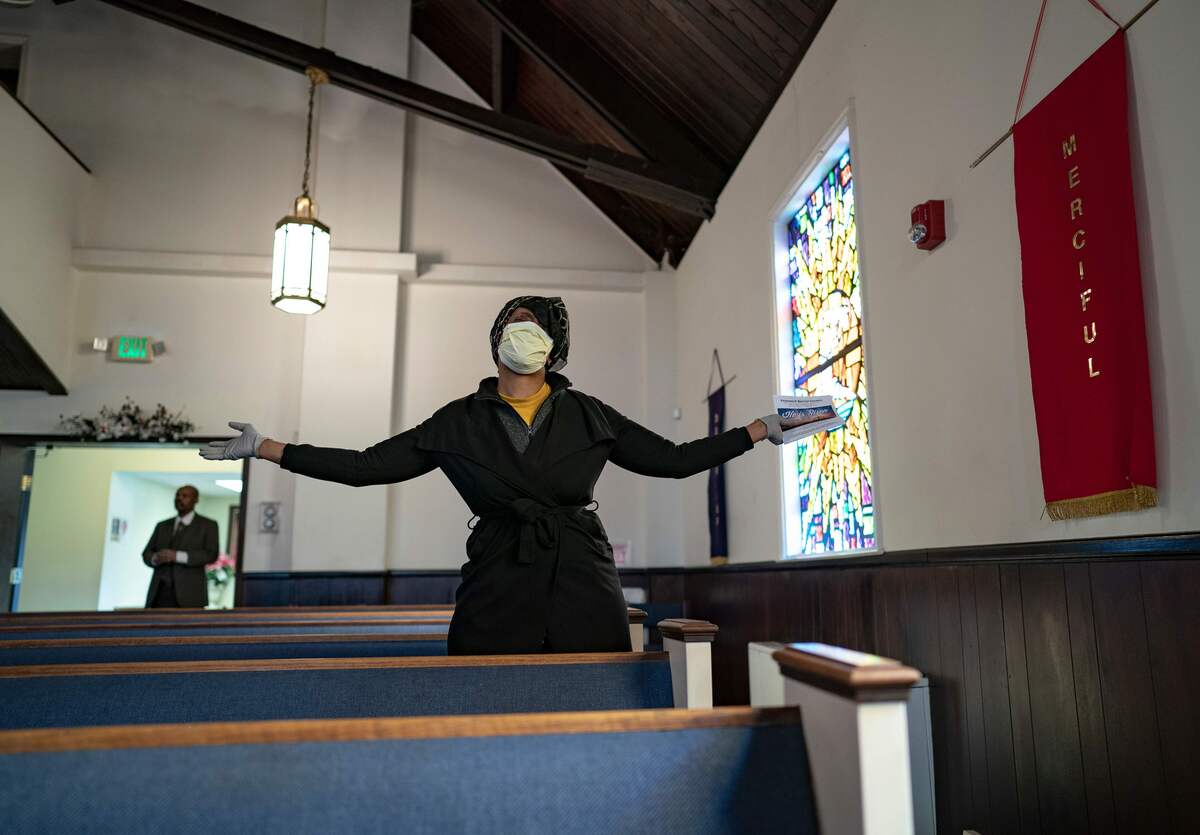 Some churches at the center of COVID-19 outbreaks have shunned attention or responded with defiance, while others have limited crowd sizes and encouraged congregants to wear masks and practice social distancing.

The day after the Maine Center for Disease Control and Prevention announced an outbreak at Calvary Baptist Church in Sanford, Pastor Todd Bell stood at his pulpit for in-person service.

The state was in the middle of tracing a "super-spreader wedding event" and investigating whether Calvary Baptist was linked. After members of the church's choir stood shoulder to shoulder on stage and sang, unmasked, Bell turned his attention to the outbreak. He railed against public health officials for intervening in the church's affairs.

"You're looking at a liberty lover!" Bell told the congregation. "I — love — liberty. And I want the people of God to enjoy liberty!"

Bell said wearing masks was like trying to keep out a mosquito with a chain link fence. His response drew fierce criticism and national media attention. Ultimately, nine cases were identified at Calvary Baptist Church. Since then, at least a half dozen other congregations in Maine have had outbreaks. Many faith leaders have shied away from attention. But Pastor Matt Burden of the Second Baptist Church in Calais, Maine, has taken a more public health-minded approach. When some members of his congregation tested positive for COVID-19, he posted a Facebook video to spread the word.

"It's been kind of a crazy week," he says in the video, sitting on a couch in his home with his young daughter by his side. "We certainly would want to recommend anyone from our church family who is experiencing any kind of symptoms, or anything like that, please isolate, get yourself tested."

This may seem like a natural response, but Burden says there's a strong temptation to keep this kind of situation under wraps.

"It would have been really a lot easier road for me, if I hadn't opened my mouth so much," he says, now.

That's because opening up put the Second Baptist Church under a magnifying glass. And urging members of the congregation to get tested meant that more COVID-19 cases would likely be discovered and associated with the church. So far, there have been more than two dozen cases. It's the second largest church outbreak in Maine. Burden says the situation has been especially disheartening because he had implemented safety measures. The church offered two services to limit crowd size and roped off pews for social distancing. Masks were recommended but not required during services.

"To be honest, it was really hard," Burden says. Calais is a rural city of 3,000 residents perched on the border of Canada. "We were in an area that was not hard hit by the coronavirus for most of the summer, the early fall. And we were among the most cautious institutions in town. Even amongst my own congregation, you know, people have been very supportive, they're willing to play by the rules. But there is a feeling amongst some people that, 'Why are we doing all this stuff?'"

The director of the Maine CDC, Dr. Nirav Shah, says when it comes to the coronavirus, churches are of special concern.

"Some of the things that can generate COVID-19 are literally the reasons you go to church for — fellowship, close camaraderie, singing," he says.

When outbreaks do erupt in houses of worship, Shah says it requires a more deft response compared to other settings.

"I think it's safe to say that for the past, you know, 2,000 to 3,000 years, those who attend different houses of worship have felt besieged, no matter what your faith," he says.

Building trust, Shah says, is the biggest challenge. But he doesn't fault people for being reticent about sharing.

"It's my job to build that trust, to convince them that sharing who they were at service with, will be used for good," he says.

Pastor Burden's church decided being transparent was in the best interests of the community, but he understands why some churches are more reluctant. There's a sense, he says, that churches are singled out for blame in ways that other institutions or businesses aren't.

"So I'm very sympathetic to the way that a lot of other churches are trying to wrestle with this. It's not an easy thing," the pastor says.

Burden gives frequent updates on his congregation's COVID-19 situation in Facebook posts, and he says his transparency has yielded some positive attention. Several pastors have called to offer support. Others have also asked how they can avoid an outbreak.

"It's an interesting call to take from someone who wants to know how not to end up like you," he says. "But I understand where they're coming from, right?"

Because, Burden says, no congregation wants to end up in the headlines for a COVID-19 outbreak.