Accessibility links
Tyson Managers Suspended After Allegedly Betting If Workers Would Contract COVID The move comes a day after the family of a deceased employee sued Tyson, claiming "incorrigible, willful and wanton disregard for worker safety at its pork processing facility in Waterloo, Iowa." 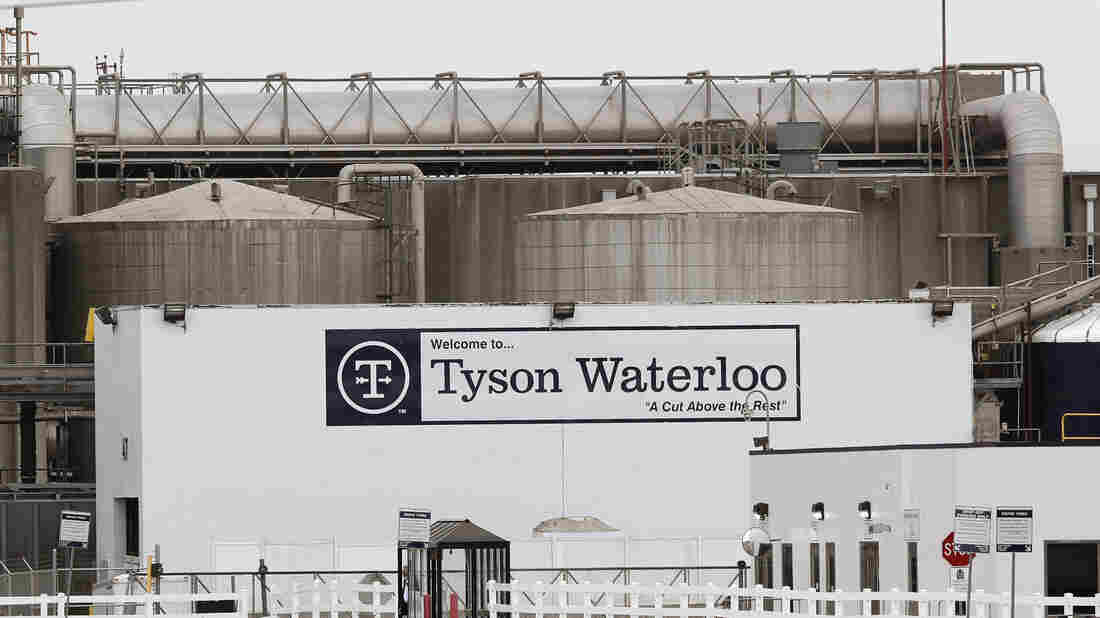 A lawsuit filed by the family of a former Tyson employee who died of COVID-19 complications alleges company supervisors were instructed by high level officials to falsely deny the existence of "confirmed cases" or "positive tests" as early as March. Charlie Neibergall/AP hide caption 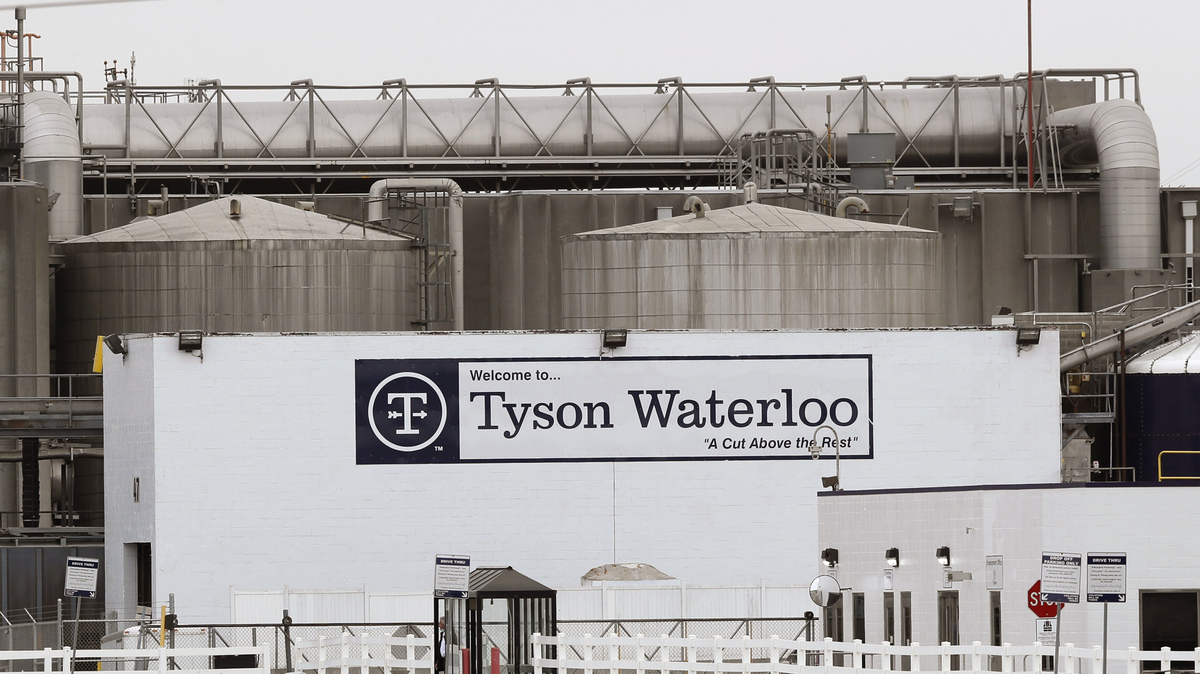 A lawsuit filed by the family of a former Tyson employee who died of COVID-19 complications alleges company supervisors were instructed by high level officials to falsely deny the existence of "confirmed cases" or "positive tests" as early as March.

Tyson Foods Inc., which says it produces 20% of the beef, pork and chicken in the U.S., has suspended managers at an Iowa plant accused of participating in a betting pool on how many employees would become ill with COVID-19.

President and CEO Dean Banks also announced on Thursday the company has launched an investigation led by former Attorney General Eric Holder into the allegations.

The suspensions come one day after the family of a deceased employee filed a lawsuit claiming "fraudulent misrepresentations, gross negligence, and incorrigible, willful and wanton disregard for worker safety at its pork processing facility in Waterloo, Iowa."

"We are extremely upset about the accusations involving some of the leadership at our Waterloo plant," Banks said in a statement.

"We have suspended, without pay, the individuals allegedly involved and have retained the law firm Covington & Burling LLP to conduct an independent investigation led by former Attorney General Eric Holder."

He is among those personally named in the suit filed on behalf of Isidro Fernandez, who worked at the pork plant before dying from COVID-19 complications on April 26. Other top ranking officials named in the filing are Tyson Chairman John Tyson, CEO Noel White, President Stephen Stouffer, Vice President Tom Brower, Manager Tom Hart, Safety Lead Bret Tapken, and Managers Cody Brustkern and John Casey.

Tyson, which reportedly had $42.4 billion in sales in 2019, has been family-owned for three generations, making the family one of the wealthiest in the U.S, according to Business Insider.

The Waterloo plant is the largest pork plant in the country, employing approximately 2,800 workers.

It's one of several Tyson facilities that has experienced severe outbreaks of the coronavirus which has caused some to temporarily shut down. Since the start of the pandemic, according to court filings, more than 1,000 employees at the Waterloo facility have been infected with COVID-19.

As of May about 4,600 cases of the disease and 18 deaths have been linked to Tyson Foods, Business Insider reported.

According to the court documents, company supervisors were instructed by the defendants to falsely deny the existence of "confirmed cases" or "positive tests" within the Waterloo facility as early as March.

The top brass also allegedly told workers "they had a responsibility to keep working in order to ensure Americans don't go hungry."

The plaintiffs say managers also continued transferring employees between plants after some had tested positive for the coronavirus without requiring them to quarantine.

Between March and mid-April Tyson leaders declined to shut down the plant despite multiple pleas from county officials, including Sheriff Tony Thompson who said conditions at the facility "shook [him] to the core," the documents allege.

"Around this time, defendant Tom Hart, the plant manager of the Waterloo facility, organized a cash buy-in, winner-take-all betting pool for supervisors and managers to wager how many employees would test positive for COVID-19," the lawsuit states.

Meanwhile, employees complained to Waterloo health care providers that they did not have sufficient personal protective equipment and that social distancing guidelines were ignored on the plant floor and in employee locker rooms. They also said under-resourced nurses could not accurately conduct temperature checks. And non-English speaking employees mistakenly believed they could return to work while sick.

"At least one worker at the facility vomited on the production line and management allowed him to continue working and return to work the next day," lawyers for Fernandez' family said.

Tyson also offered $500 "thank you bonuses" to employees who turned up for every scheduled shift for three months, the filings say.

"On one occasion, Mr. Casey intercepted a sick supervisor en-route to get tested and ordered the supervisor to get back to work, adding, 'we all have symptoms—you have a job to do.' "

In his statement Thursday, Bank said Tyson has invested "hundreds of millions of dollars to transform our U.S. facilities, including the Waterloo plant."

The company has implemented "walk-through temperature scanners and workstation dividers to social distance monitors and always-on testing," he said.

Tyson eventually suspended work at the Waterloo plant on April 22, 10 days after two dozen employees were admitted into a local emergency room.

They simultaneously lobbied Republican Gov. Kim Reynolds, successfully lobbying her to issue an executive order stating that only the state government, not local governments, had the authority to close businesses in northeast Iowa, where the Waterloo facility is located.