Accessibility links
Lawsuits, Bias Claims And A Sex Scandal: VOA's Five Months under Trump CEO Michael Pack is nearing the close of his turbulent tenure as CEO of the parent agency to the Voice of America. After firings and claims of bias, staffers say they fear more damage on his way out. 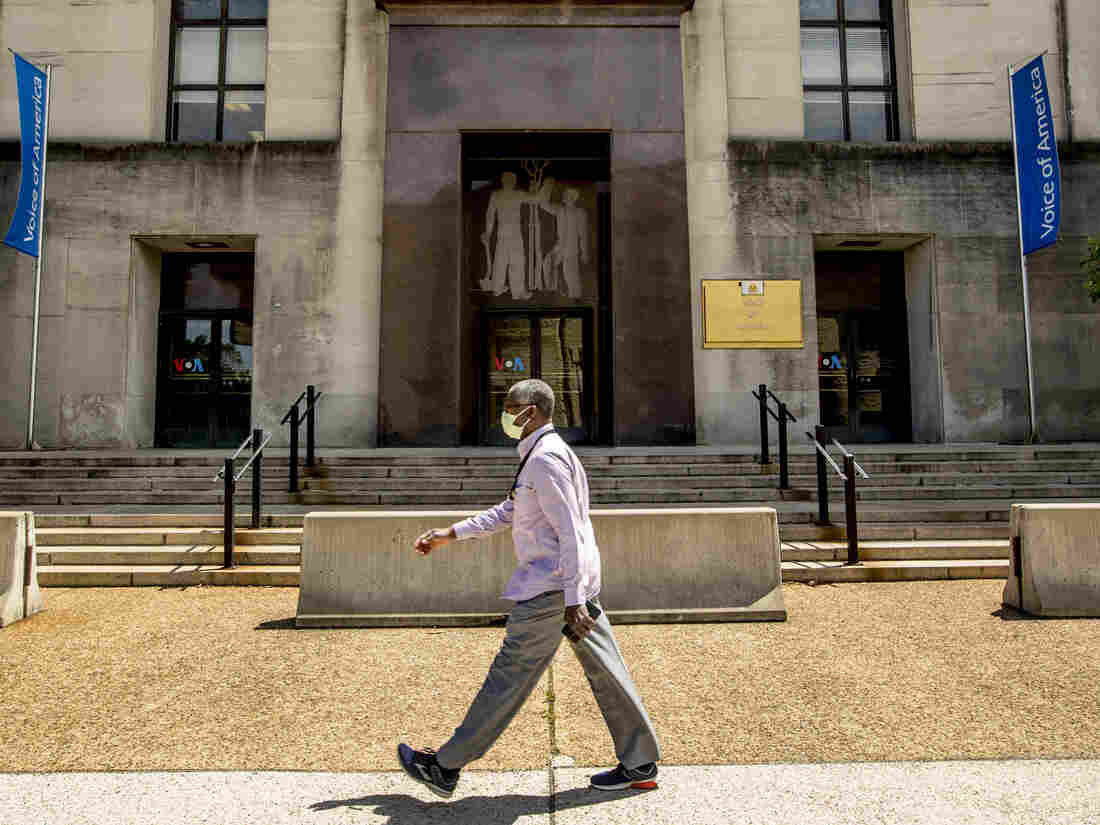 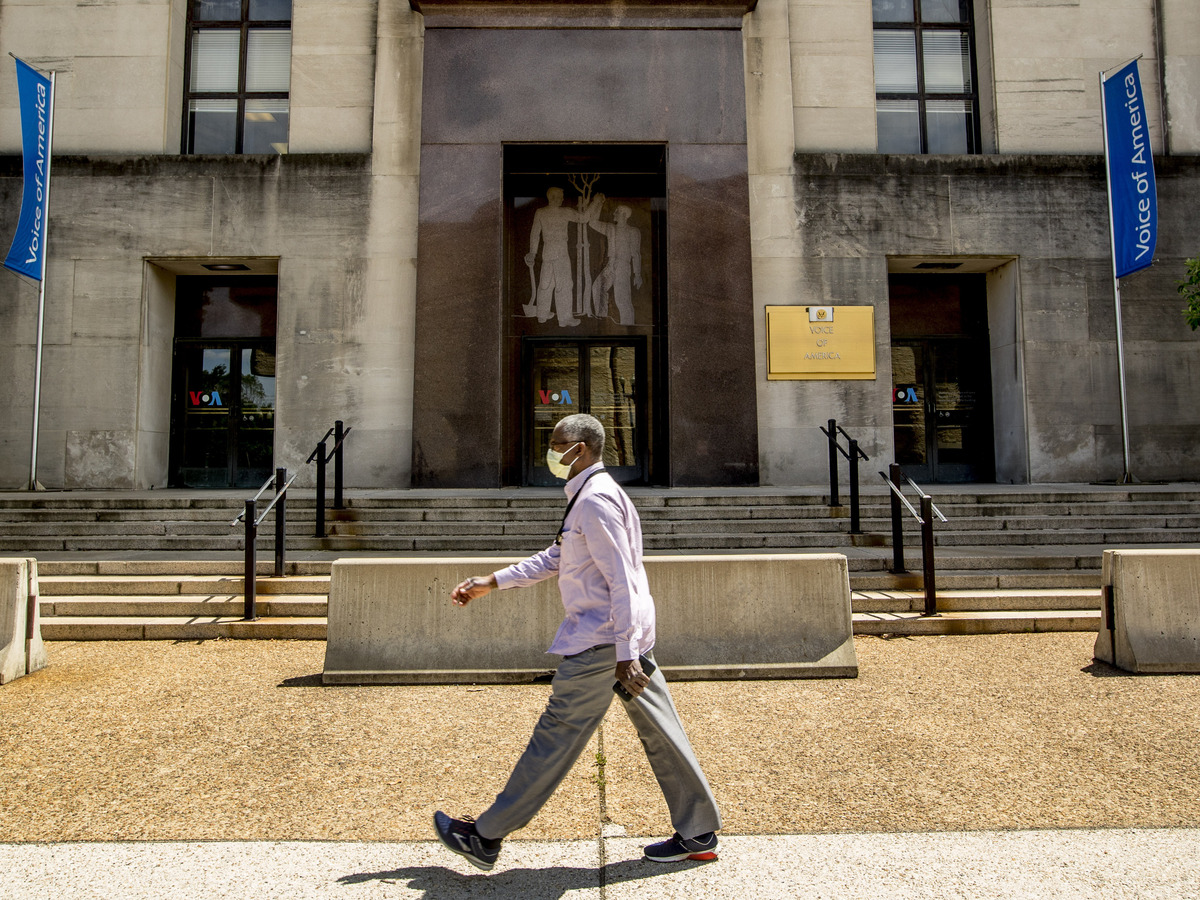 Crisis has been the defining constant at the Voice of America and its parent agency for the past five months.

That's how long Michael Pack, the conservative documentary maker picked by President Trump to lead the U.S. Agency for Global Media, has been in charge.

In that time, he's noisily erased protections for government journalists, ousted leaders from executive suites to the newsroom, and rejected visas for foreign staffers. There have been scattershot accusations of ideological bias and national security lapses, outrage from Democratic and Republican lawmakers alike, lawsuits and even a sex scandal.

The question that remains is how Pack will play the end game at USAGM and the federally funded foreign broadcasters under its umbrella, which include VOA, Radio Free Europe/Radio Liberty and Radio Free Asia. President-elect Joe Biden has named former State Department official and Time magazine managing editor Richard Stengel to assess USAGM during the transition; he is widely believed to be Biden's pick to replace Pack.

Over the summer, Pack told the conservative The Federalist that his mandate was "to drain the swamp, root out corruption, and to deal with these issues of bias" at VOA and USAGM, though he disclaimed any desire to tell reporters what to report. Pack and his aides have consistently accused VOA of being rife with anti-Trump sentiment. Several journalists have had their contracts terminated over offending news segments. An editor was suspended. Pack's senior aides have pushed for the network's White House bureau chief to be sidelined, alleging a tilt toward Democrats, despite policies barring USAGM executives from interfering in coverage.

And Pack's war on his agency and its journalists does not appear to be winding down. A number of people inside USAGM and its networks say they fear another shoe is about to drop. Pack and his top aide handling press inquiries, Diane Cullo, did not respond to repeated requests for an interview or even to acknowledge NPR's questions seeking comment for this story.

In sworn court statement, VOA Programming Director Kelu Chao wrote that as a result of Pack's actions, its journalists "have been excessively cautious, slow to produce stories, and afraid to run down important stories and leads - particularly about politically sensitive topics, no matter how important."

She continued: "This has impacted Voice of America's coverage at a time when it is most needed. Particularly during a presidential election year."

"Catastrophic," says Sanford J. Ungar, director of the Voice of America from 1999 to 2001. "[Pack] was sent over to do an ideological hit job. You can dream up any improbable case for trying to destroy the independence of VOA. But it's bull----."

A video scandal that may differ from the headline

VOA is the largest network run by USAGM and stands at the heart of the agency. It was a target of White House rhetoric last spring and remains the greatest thorn in Pack's side. The interviews he has granted, which are almost entirely to conservative media outfits, reflect his distrust of VOA journalists. Some people who work at VOA and at USAGM tell NPR they believe that antipathy figured into a scoop that appeared in the Trump-friendly Daily Caller just before Election Day.

The story carried the splashy headline: "Investigation Begins After Video Appears to Show Two People Having Sex in Voice of America Office Building." It also carried a still from the video, apparently taken from across the street in downtown Washington, D.C. A USAGM spokesperson was quoted confirming the incident to the Daily Caller, saying Pack's chief of staff, Emily Newman, personally took action to initiate the investigation.

What the spokesperson did not say, or the Daily Caller chose not to report, was that the incident did not occur in the VOA's offices but on the other side of the building, in the third floor executive suites of USAGM. According to eight current and former employees of USAGM and Voice of America, the location has served as part of USAGM's Office of Congressional Affairs. It sits within a dozen yards of Pack's CEO suite, several people said, and near a conference room designed for the transmission of sensitive material - a so-called "SCIF" - supposed to be the most secure place in the building. There has been no evidence presented publicly or within Voice of America that anyone from VOA was involved, these people say.

Several of Pack's colleagues accused him of hypocrisy over the incident. In speaking with The Federalist, Pack had justified suspending and seeking to fire much of the agency's top leadership over questions of security and accused the agency of being "a great place to put a foreign spy." These critics suggested the incident shows lax security under Pack's own leadership. Because of the rash of firings and suspensions, none were willing to be named by NPR, citing fears for their jobs. Pack and Cullo did not respond to questions about the incident from NPR.

These employees also raised questions about Pack's invoking security concerns in hiring practices at the agency in light of his choice of Samuel Dewey as a senior advisor at USAGM. As NPR first revealed, Dewey is subject to a restraining order in Maryland that required him to surrender his firearms.

Dewey has helped to lead investigations of reporters for bias. Among those he investigated was Steve Herman, VOA's White House bureau chief. Herman remains on the job despite Dewey's pressuring the acting VOA director to sideline him. Another notable investigation focused on staffers for VOA's French-to-Africa service over a profile of Biden's wife, Jill Biden, that followed a similar piece on First Lady Melania Trump.

The networks Pack oversees reach an estimated 350 million people overseas each week. They historically have modeled American values by providing balanced coverage of news events and robust political debate, regardless of how it reflected on current government officials.

A so-called "firewall" has protected the networks' newsrooms from political interference. It has been largely observed by tradition, is acknowledged in law, and set out more specifically in regulation just before Pack took office as an attempt to keep him away from influencing news coverage. Pack announced late last month that he had swept that regulation aside.

The broadcasters also offer domestic coverage for citizens of nations that do not allow journalists to operate freely. And in the case of VOA, it provides clearly designated editorials stating the official U.S. policy from the State Department. Pack ordered the editorials become more frequent and more prominent.

On Monday, Pack published an annual review reiterating his concerns over security and bias and promising a focus on ensuring that "content and programming are marked by 'fairness, objectivity and balance.'" He promised to "enforce internal standards that prohibit biased and partisan reporting."

Last week, government attorneys defending USAGM in court claimed that the free speech protections of the First Amendment don't apply to employees of Voice of America, despite its mission.

"Voice of America is a government agency; its speech, even in a journalistic capacity, is government speech," a team of federal attorneys led by Acting U.S. Assistant Attorney General Jeffrey B. Clark wrote. "In sum, it is consistent with the Constitution for the CEO to control the content of the networks' broadcasts. The networks are not protected by the First Amendment, and Congress has not extended those protections to the networks by statute."

Most newsrooms would handle the editorial judgments that sparked Pack's ire through a conversation, a review, or a rebuke. Instead, Pack instigated investigations, reassignments, suspensions and firings, simply blowing past the traditions and point of the "firewall."

In late October, a journalist who had been working for VOA's Urdu language service, Vardha Khalil, sued the Trump administration for wrongful termination. She was among those investigated by Dewey, in her case, over a segment about Biden's outreach to Muslim voters.

On the day after the election, VOA's Kelu Chao joined a larger lawsuit against Pack filed by five senior USAGM executives whom he had suspended. They are seeking to persuade a federal judge to order Pack to restore the firewall regulations.

The federal judge in the case, Beryl A. Howell, indicated Chao had a much stronger case than the executives. The judge asked the plaintiffs whether Biden's win would remove any threat Pack poses. The attorneys said they feared Pack would seek to do irreversible harm before Biden's inauguration in late January.

Stengel and other Biden transition officials declined to comment. But back in June, just weeks after Pack was confirmed in the position, Biden's campaign told Vox that, if elected, he would move to fire the new USAGM chief.

This story was reported by NPR media correspondent David Folkenflik and edited by NPR Media and Tech Editor Emily Kopp. Because of NPR CEO John Lansing's prior role as CEO of the U.S. Agency for Global Media, no senior news executive or corporate executive at NPR reviewed this story before it was published.