Accessibility links
Review: The 'Animaniacs' Reboot On Hulu Is Wacky TV At A Wackier Time The beloved cartoon is resurrected at a time when real life might be zanier than anything Yakko, Wakko and Dot could conjure up. 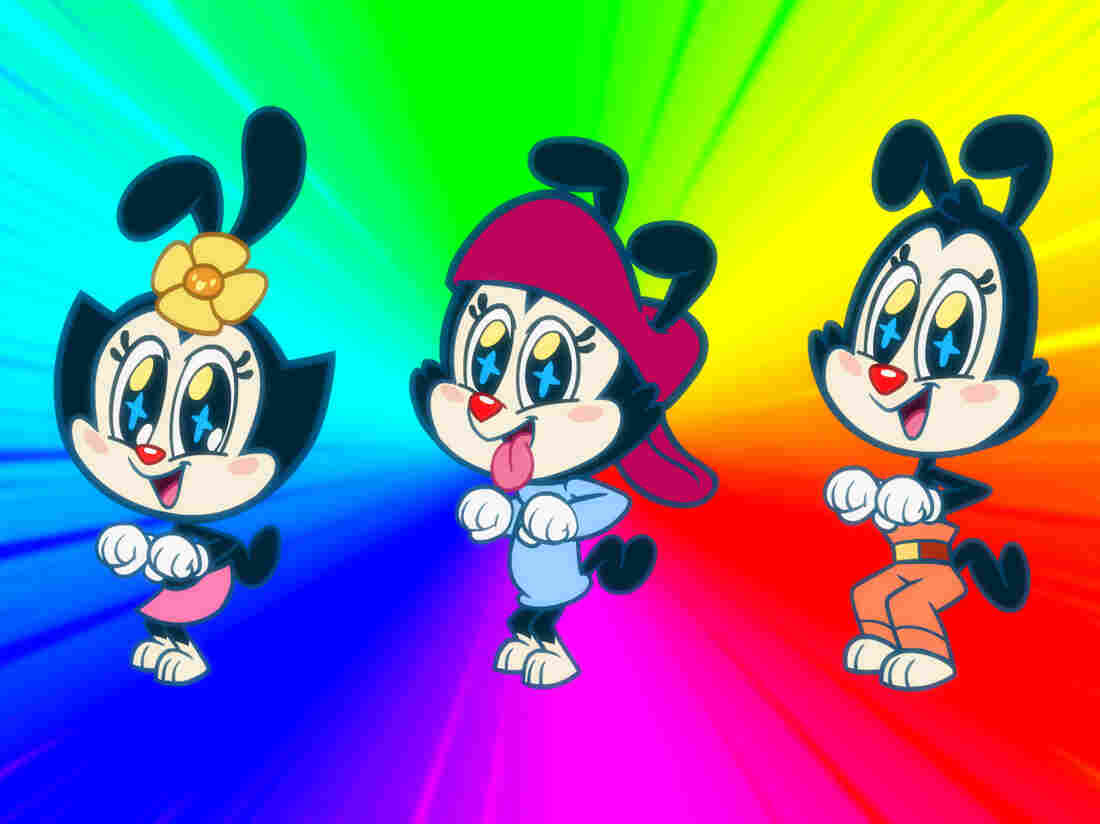 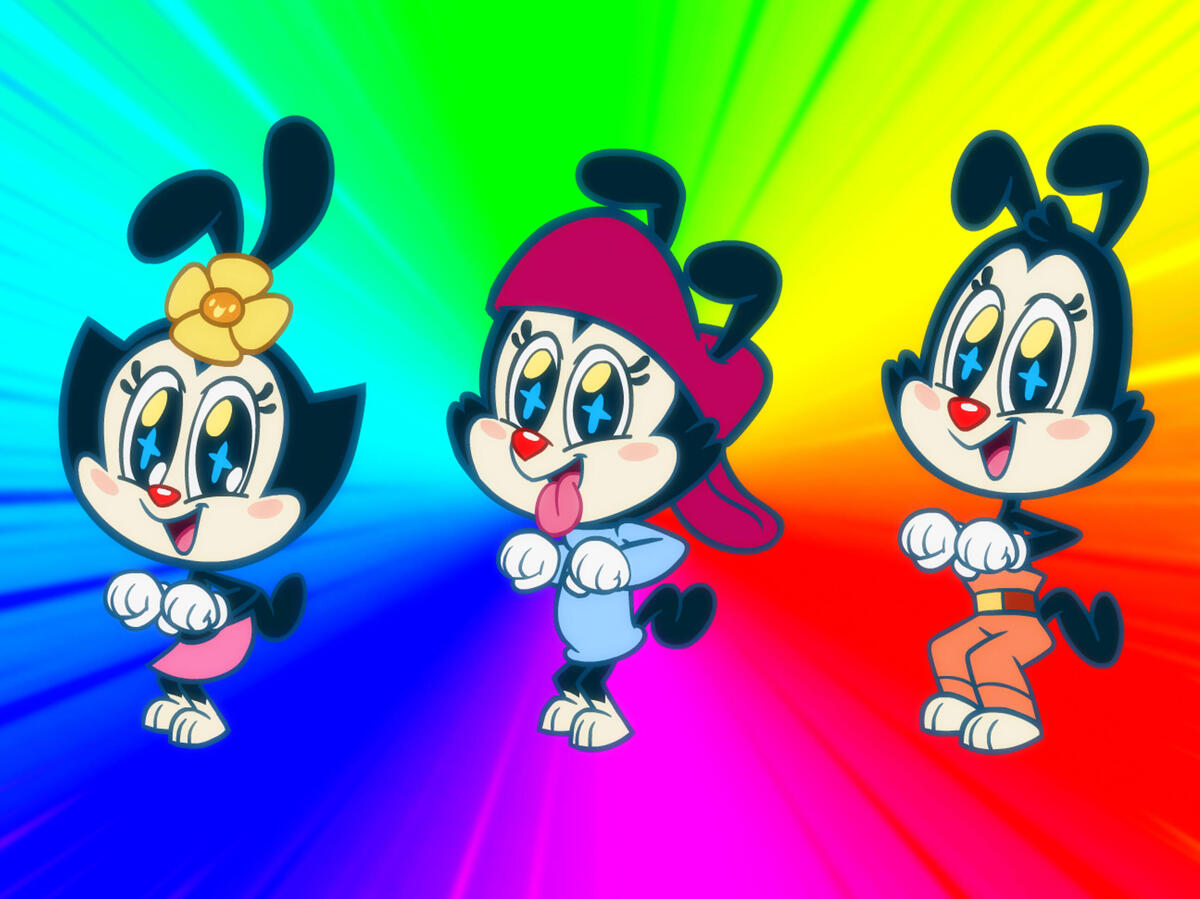 Yakko, Wakko and Dot return for a very politically-minded reboot of Animaniacs.

Because it was the early '90s, one version of the zippy theme song for the original Animaniacs includes a reference to Bill Clinton playing the sax. Clinton jokes were everywhere in that era, even in cartoons supposedly aimed at kids, and as a show specializing in meta humor and mile-a-minute cultural references, Animaniacs was no different. Sprinkled in among the many Looney Toon homages, Disney parodies and sprightly musical numbers was the occasional political gag or segment that surely went over the heads of millennial kids like myself, but appealed to the adults in the room who understood what was going on with the Whitewater scandal.

Because it's 2020, the new Animaniacs theme song includes a line in which the characters proclaim they are "Gender balanced, pronoun neutral, and ethnically diverse." It's just one sign that the reboot, now streaming on Hulu, is thoroughly of This Moment – among the 13 episodes, there is a segment involving a bizarre allegory for gun control (using bunnies instead of guns!), puns about fake news and "Make America Great Again," and, of course, at least one (Hillary) Clinton jab. There are still pop culture references galore, to be sure – the opening scene from the first episode hits the ball straight down the middle of millennial sensibilities with a Jurassic Park parody – but the balance has noticeably tilted more heavily toward the explicitly political.

Should we have expected anything different? After all, following the last four years, is it even possible to make meta humor without speaking directly to how wild, surreal and utterly zany to the max everything in real life has become?

Maybe not – but oh, how I wish the writers had tried a bit harder to do so anyway. What makes the original incarnation still watchable decades later – even as many of the references are very of their time – is the timelessness of their original characters. In addition to the Warner siblings Yakko (voiced by Rob Paulsen), Wakko (Jess Harnell), and Dot (Tress MacNeille) the show birthed a number of distinct and memorable personalities who rotated throughout the Animaniacs universe, including Slappy the Squirrel (Sherri Stoner), a curmudgeonly veteran cartoon star; Rita (Bernadette Peters) and Runt (Frank Welker), a singing cat and dimwitted dog pair; and Colin (Colin Wells), the chatty boy who tells offbeat stories about his friend Randy Beaman.

The reboot lacks such variety, instead focusing primarily on the Warner siblings and Pinky and the Brain segments, with hardly any other familiar faces or new characters. (One admittedly clever segment, a deliberate nod to the classic Elmer Fudd-Bugs Bunny cartoons, attempts to address the absence of those other characters, but self-referential mugging of this sort only does so much to fill the gap.)

At its best, the earlier version's team really committed to absurdist humor and clever wordplay that managed to transcend the single-joke-y nature of many of its recurring segments; they got a surprising amount of mileage out of those endless Italian mob movie parodies via the Goodfeathers. And like, say, Who Framed Roger Rabbit? and The Simpsons, it was equally adept at melding highbrow references with slapstick and groan-worthy puns.

But Animaniacs 2.0 feels bogged down by its overwhelming need to speak to our Trumpian era, and Yakko, Wakko, and Dot now face the familiar conundrum of how to parody a culture that has become a parody of itself after 22 years straight of being locked up in that Warner Bros. studio water tower.

To be fair, it's a tricky task to pull off, and so far, the overtly political humor is not the show's strength. When it plays up contemporary themes and ideas while being straight-up weird, as in "The Cutening," a send-up of our cultural obsession with making unappealing things like poop "cute," it's a fun visual and comic feast. But when it does an entire sketch about the 2020 election, that agonizing nightmare we've all just lived through, it feels stale. (Let's please retire the "Iowa is a state we pretend to care about once every four years" cracks!) Another sketch, in which the cartoons rally for the right to vote, lands uncomfortably in a time when the deliberate disenfranchisement of mostly black and brown voters has been front and center of the last couple of elections.

Who is the new Animaniacs for? Millennials, certainly – and millennials are now adults who care deeply about how politics affect every aspect of our lives, including art. But half-hearted, Family Guy-esque attempts to inject political sentiments into pop culture merely for the sake of doing so are exhausting. (It's probably not a coincidence that co-creator Wild is a frequent collaborator of Seth MacFarlane.) If you're going to swing open that water tower again, at least give us what the old show did best: quirky observations about internet culture, movies, TV and music through those signature, beloved characters. When it comes to Fox News riffs, that well ran dry years ago.

The original version of this piece erroneously stated that writer and artist Tom Minton was a co-creator of the 2020 series. He is not involved.