Accessibility links
President Trump's Risky Refusal To Concede The president has made it clear that he will spend his remaining days in the White House in the same way he spent much of his term in office: fighting. 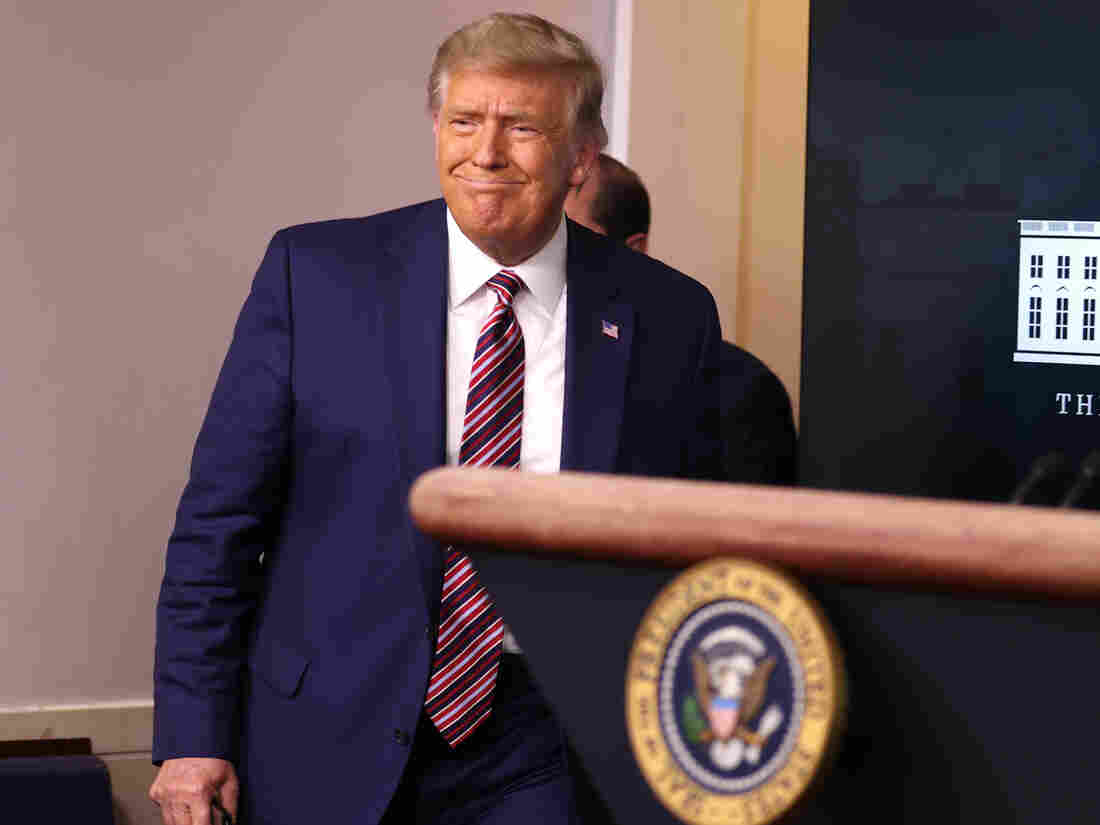 President Trump prepares to speak about prescription drug pricing at the White House on Friday, one of his rare public experiences since the election was called for Joe Biden. Tasos Katopodis/Getty Images hide caption 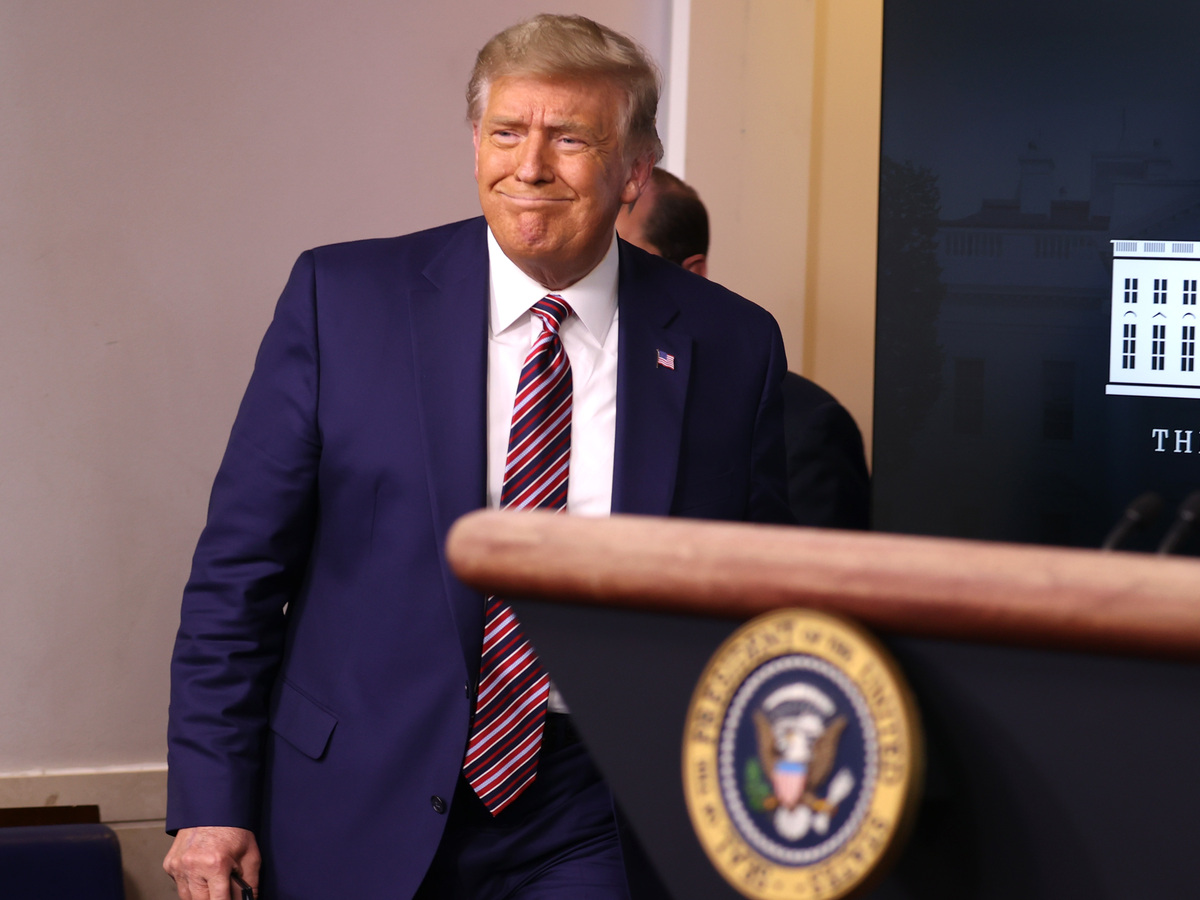 President Trump prepares to speak about prescription drug pricing at the White House on Friday, one of his rare public experiences since the election was called for Joe Biden.

In the two weeks since it became clear that President Trump lost the election to Joe Biden — a period bookended by befuddling press conferences from his longtime lawyer, Rudy Giuliani — the president has made it clear that he will spend his remaining days in the White House in the same way he spent much of his term in office: fighting.

Trump has had a long history of punching his way back from losses, like his bankruptcies and failed businesses, in a way that has allowed him to continue branding himself as a winner. But the 2020 election is the biggest, most public loss he has suffered, and he is battling to be able to walk off the stage with a grip on the base of the Republican Party, and the ability to continue to monetize his brand.

Most presidents spend their final weeks in office trying to cement their legacies. But Trump, who has mused privately about running in 2024, risks looking like a sore loser in continuing to falsely claim the election was rigged against him. And his latest extraordinary tactics have alarmed some Republicans who see him as doing damage to confidence in free and fair elections.

I WON THE ELECTION!

On Friday, Trump talked about his accomplishments on prescription drug pricing regulations, one of his top priorities — remarks that had the kind of valedictory notes you would expect from a president getting ready to leave office. "I just hope they keep it. I hope they have the courage to keep it," Trump said, without explanation of whom he meant by "they."

But he also invited top Republicans in Michigan's House and Senate to the White House, days ahead of a looming deadline for the state to certify its election results.

Some Republicans wrote it off as yet another stunt in a presidency that has been defined by them. But others were concerned Trump would try to pressure state legislatures to throw out the popular vote results and award Electoral College votes through partisan votes.

Sen. Mitt Romney, R-Utah, said on Twitter that Trump was trying to "subvert the will of the people" to overturn the election. "It is difficult to imagine a worse, more undemocratic action by a sitting American president," said Romney, who drew return fire from Trump on Twitter.

After meeting Trump, the Michigan state leaders said in a statement that they had "not yet been made aware of any information that would change the outcome of the election in Michigan" and that they would continue to follow the normal process for electoral votes.

This was a rigged election. No Republican Poll Watchers allowed, voting machine “glitches” all over the place (meaning they got caught cheating!), voting after election ended, and so much more! https://t.co/YDh7A7wxLW

Veteran Republican strategist Sean Walsh said it would be "the longest of long shots and the bankiest of bank shots" to try to get Michigan and enough other states to try to overturn results — a strategy that could spark "mini revolts" in states — and then to have the Supreme Court uphold such a move.

"The two unhappiest campers in the world have got to be the Senate and House Republican leaders from Michigan. They're just put it an absolutely awful place," said Walsh, who served in the Reagan and George H.W. Bush White Houses.

Trump's campaign had stacked its ranks with election lawyers early during the push for a second term, recognizing that there could be need to contest close results. But as initial challenges fizzled, and it became clear that there is no evidence of widespread fraud or other irregularities that would impact the outcome of the presidential race, those lawyers were sidelined. Instead, Trump put former New York City Mayor Giuliani in charge of what has became an increasingly erratic strategy. 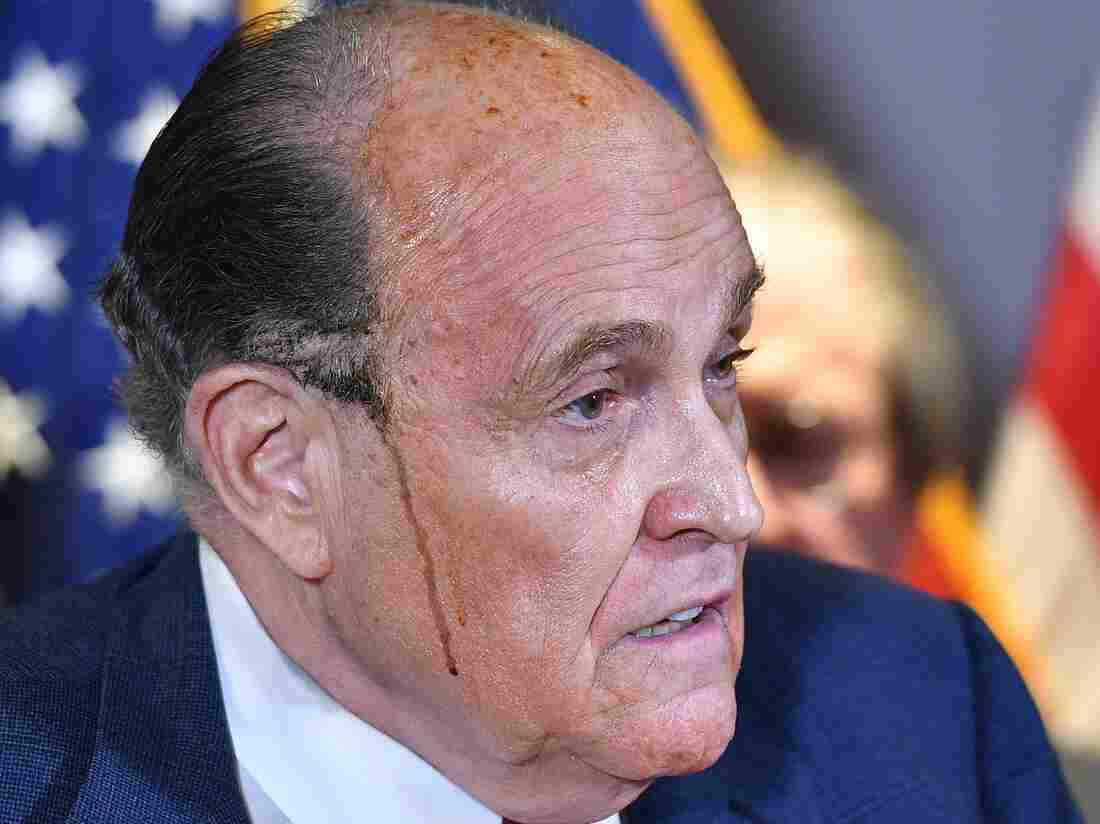 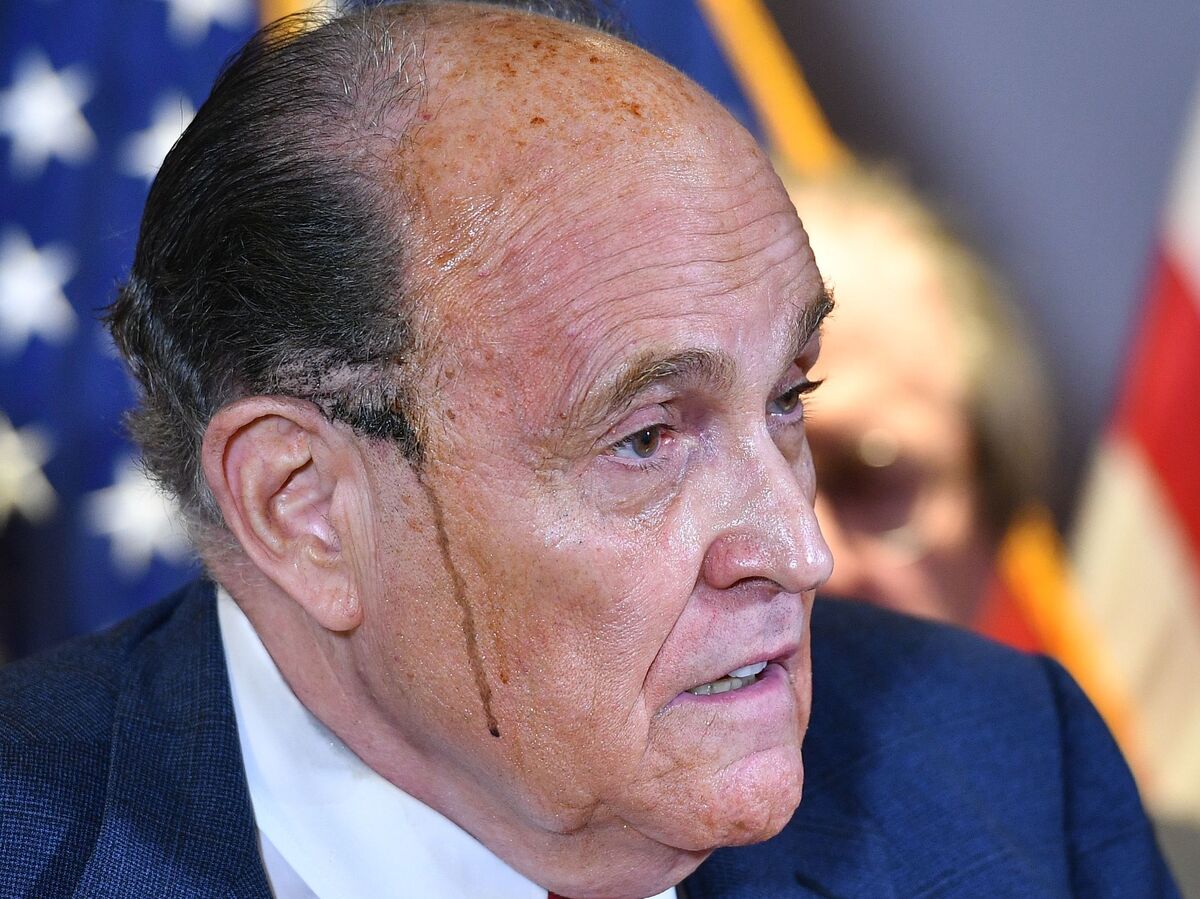 Trump's personal lawyer Rudy Giuliani perspires as he speaks during a press conference at the Republican National Committee headquarters this week in Washington, D.C.

Giuliani's first big press event two weeks ago, when the race was called, was held inexplicably at a landscaping company in a business park in Philadelphia, and quickly became the butt of jokes and an Internet meme.

But on Thursday, the former mayor followed it up with a 90-minute event at a location with more gravitas, and more cause for concern: the headquarters of the Republican National Committee in Washington, D.C. Giuliani put forward baseless and vague claims about a shadowy plot involving a voting machine company and the Venezuelan and Cuban governments, as what appeared to be hair dye ran down his face in rivulets of sweat.

Earlier in the week, Trump had fired Chris Krebs, a top Homeland Security official, after he said that the election had been secure and that there was no evidence of compromised voting systems — the conspiracy baselessly alleged by Giuliani.

That press conference was the most dangerous 1hr 45 minutes of television in American history. And possibly the craziest. If you don’t know what I’m talking about, you’re lucky.

Most Republican leaders have stayed silent about Trump's legal antics. But that could wear thin if they feel his actions will hurt the Jan. 5 runoff in Georgia, which will determine whether Republicans keep control of the Senate.

Vice President Pence — who has political ambitions of his own for the next presidential race — campaigned in the state on Friday, where crowds chanted "Stop the steal! Stop the steal!"

Pence told supporters that "we're going to keep fighting until every illegal vote is thrown out." But he quickly pivoted to explaining how retaining the Senate majority could be "the last line of defense in preserving all that we've done to defend this nation, revive our economy and preserve the God-given liberties that we all hold." 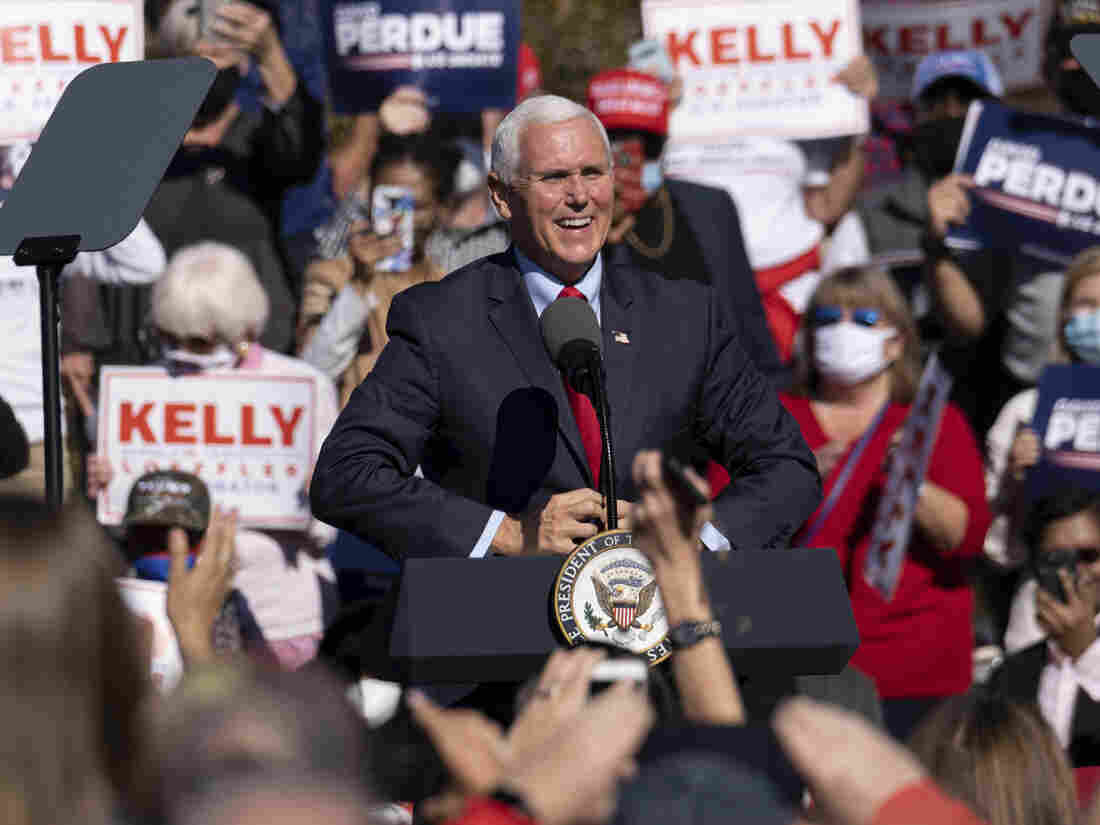 Vice President Pence speaks in Canton, Ga., at a rally for the Republican Senate candidates, races that will decide control of the Senate. Ben Gray/AP hide caption 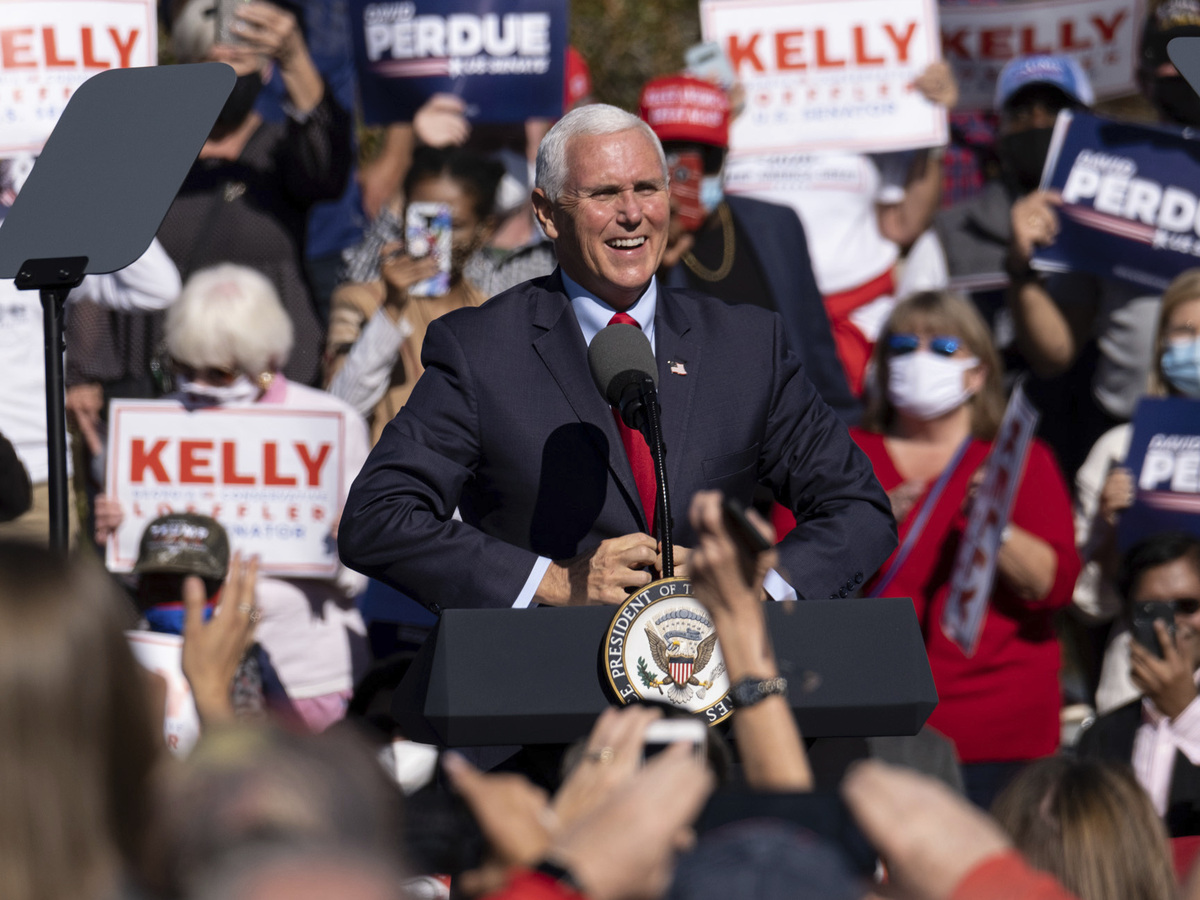 Vice President Pence speaks in Canton, Ga., at a rally for the Republican Senate candidates, races that will decide control of the Senate. 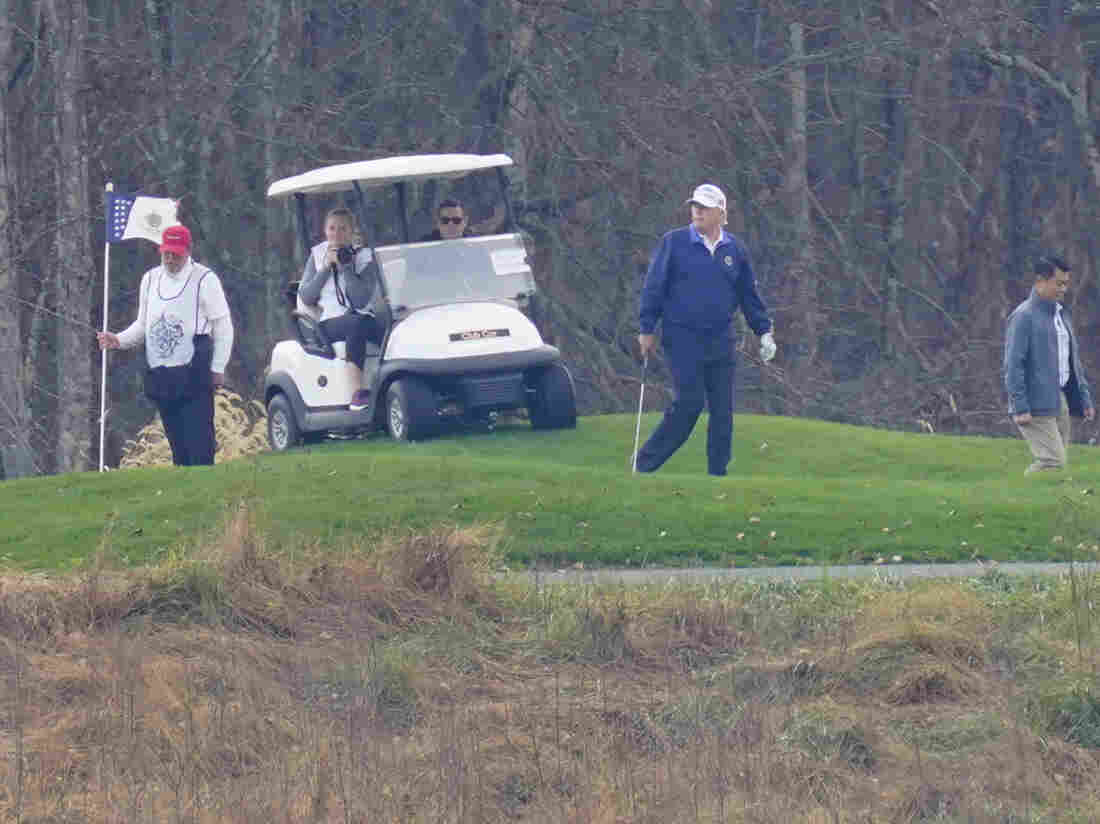 President Trump plays golf at Trump National Golf Club in Sterling, Va., as seen from the other side of the Potomac River in Darnestown, Md., on Sunday. Manuel Balce Ceneta/AP hide caption 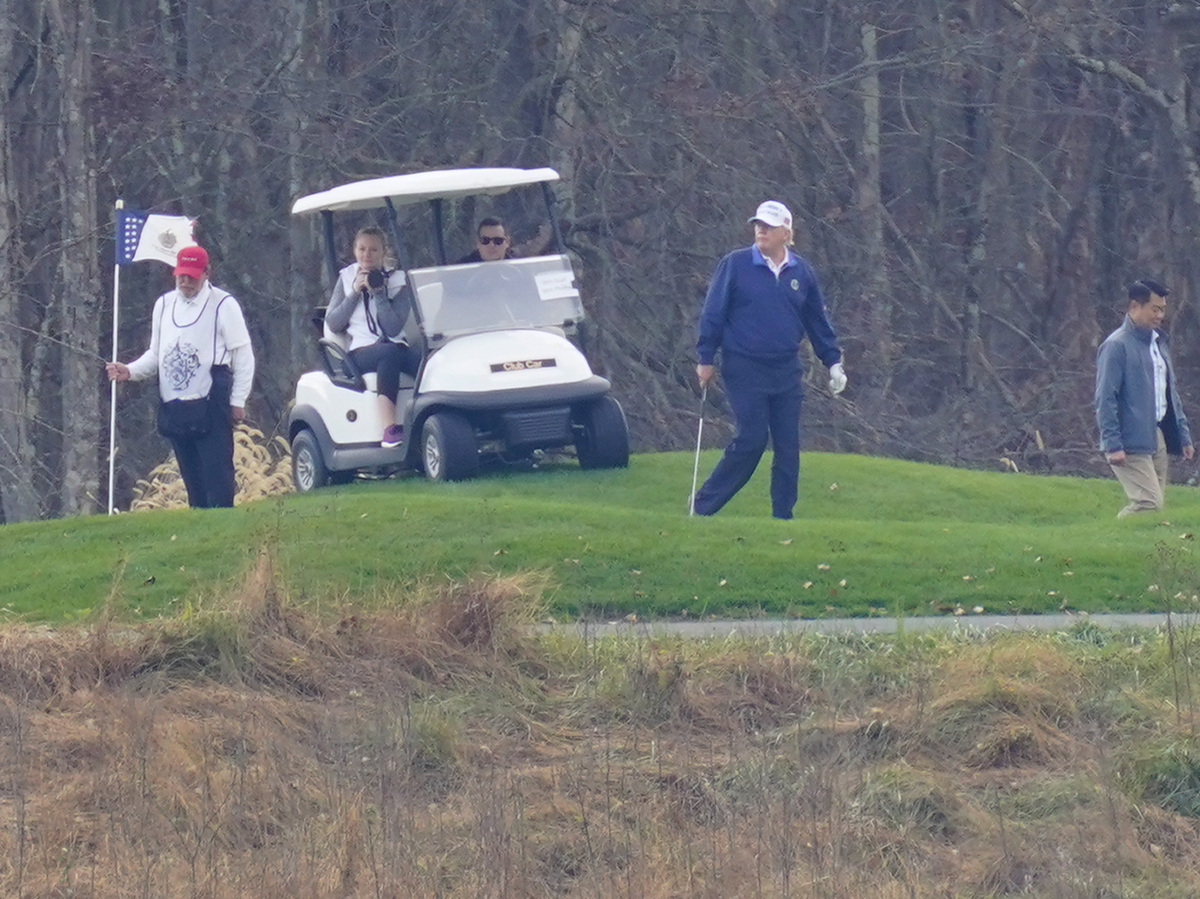 President Trump plays golf at Trump National Golf Club in Sterling, Va., as seen from the other side of the Potomac River in Darnestown, Md., on Sunday.

What Trump has not been doing for the past weeks is much detectable official business. As government workers began to build viewing stands in front of the White House where his successor will get to watch the Inauguration Day parade, Trump has emerged all of five times — two of those for golf.

Friday was the first day Trump had multiple events on his public calendar. He has not taken questions since Election Day — a notable drought for a president who has seldom gone more than a few days without parrying with the press.

Trump has not been directly addressing the explosion of coronavirus cases — nor the milestone of 250,000 deaths reached this week. He has insisted that the kind of economic shutdowns he blames for torpedoing his campaign won't happen again. Last week, he momentarily slipped and acknowledged that he might not be around to make those decisions. "Hopefully, the — the — whatever happens in the future — who knows which administration it will be? I guess time will tell," he said. 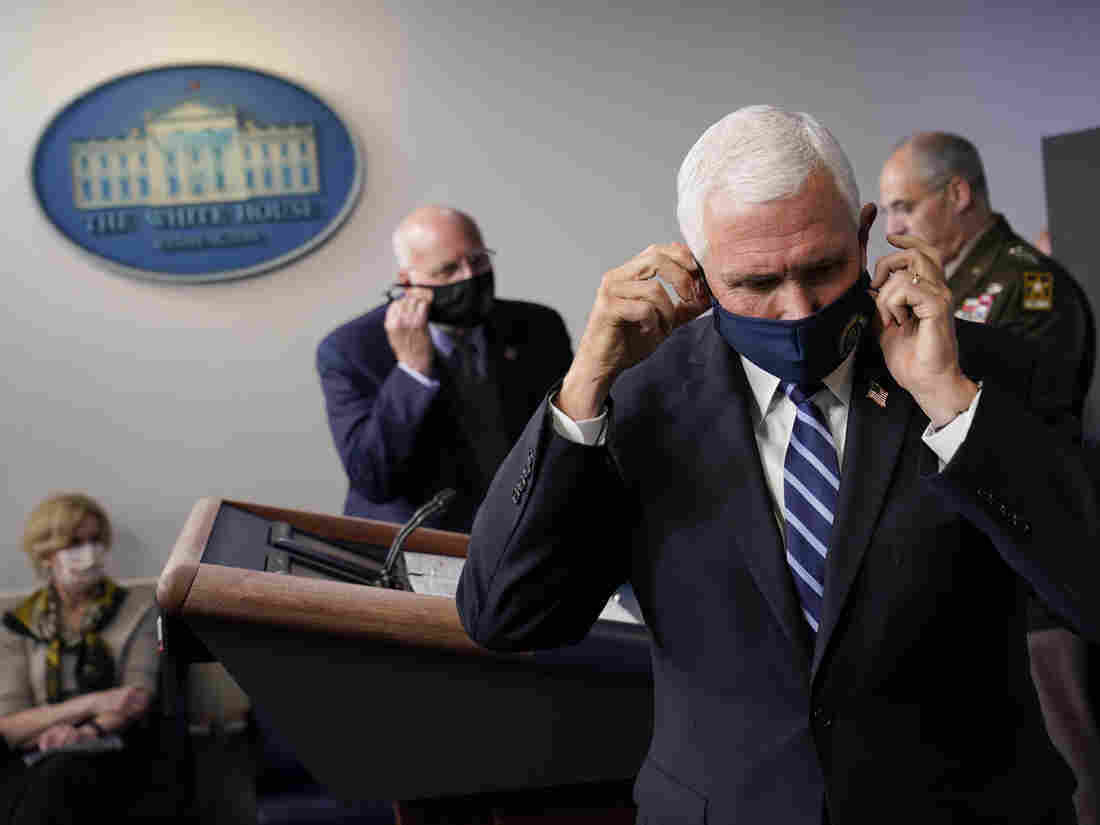 Vice President Pence adjusts his face mask during a news conference with the coronavirus task force at the White House on Thursday. Susan Walsh/AP hide caption 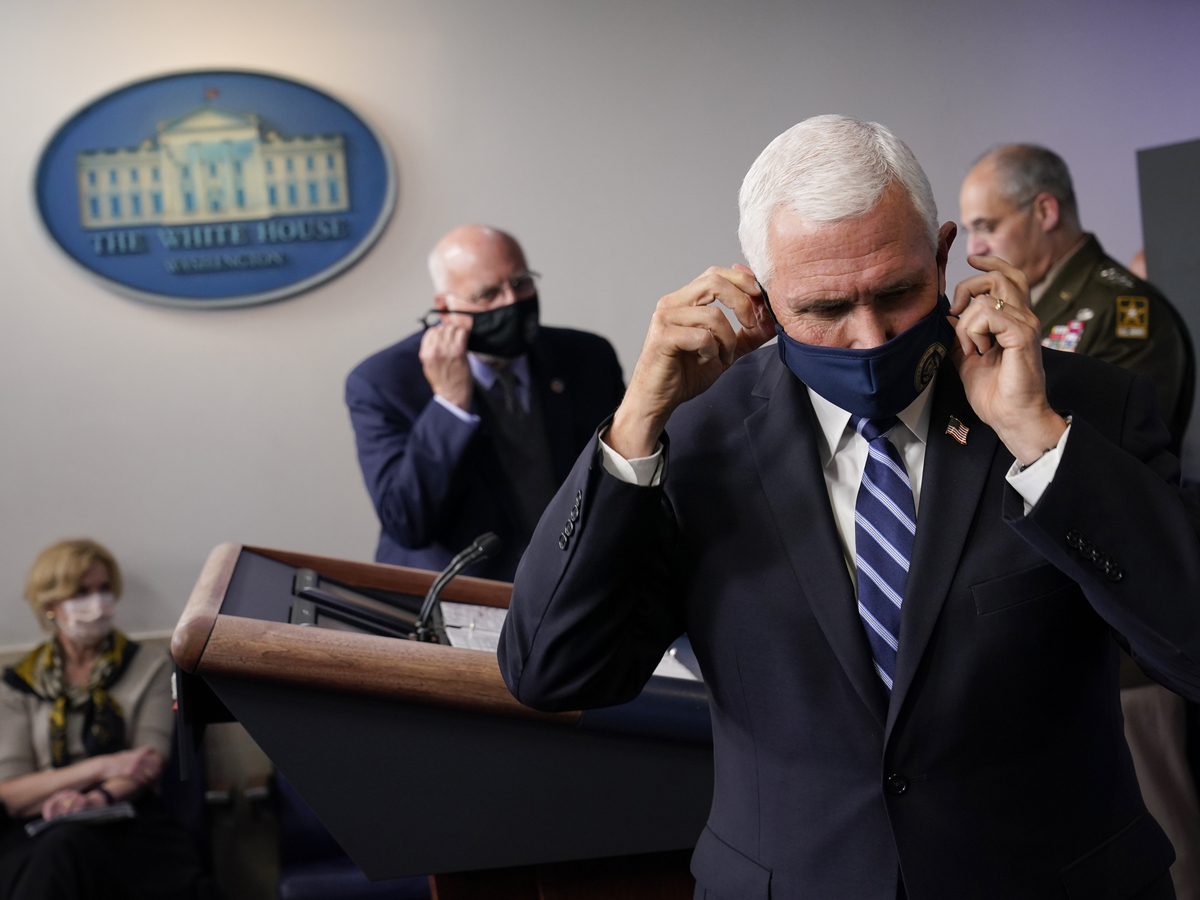 Vice President Pence adjusts his face mask during a news conference with the coronavirus task force at the White House on Thursday.

On Thursday, he left it to Pence and experts from the coronavirus task force to address the crisis. It was the first time in months that they had briefed reporters. Dr. Deborah Birx put up a slide that vividly showed the sharp spike in infections. "This is more cases — more rapidly — than we had seen before," Birx said.

Meanwhile, experts who are advising the incoming administration have raised alarms about a smooth transition, saying they need access to career officials and their data to plan — something the Trump administration has so far not allowed.

"I think that we're witnessing incredible irresponsibility, incredibly damaging messages being sent to the rest of the world about how democracy functions, and I think it is — well, I don't know his motive, but I just think it's totally irresponsible," Biden said on Thursday. 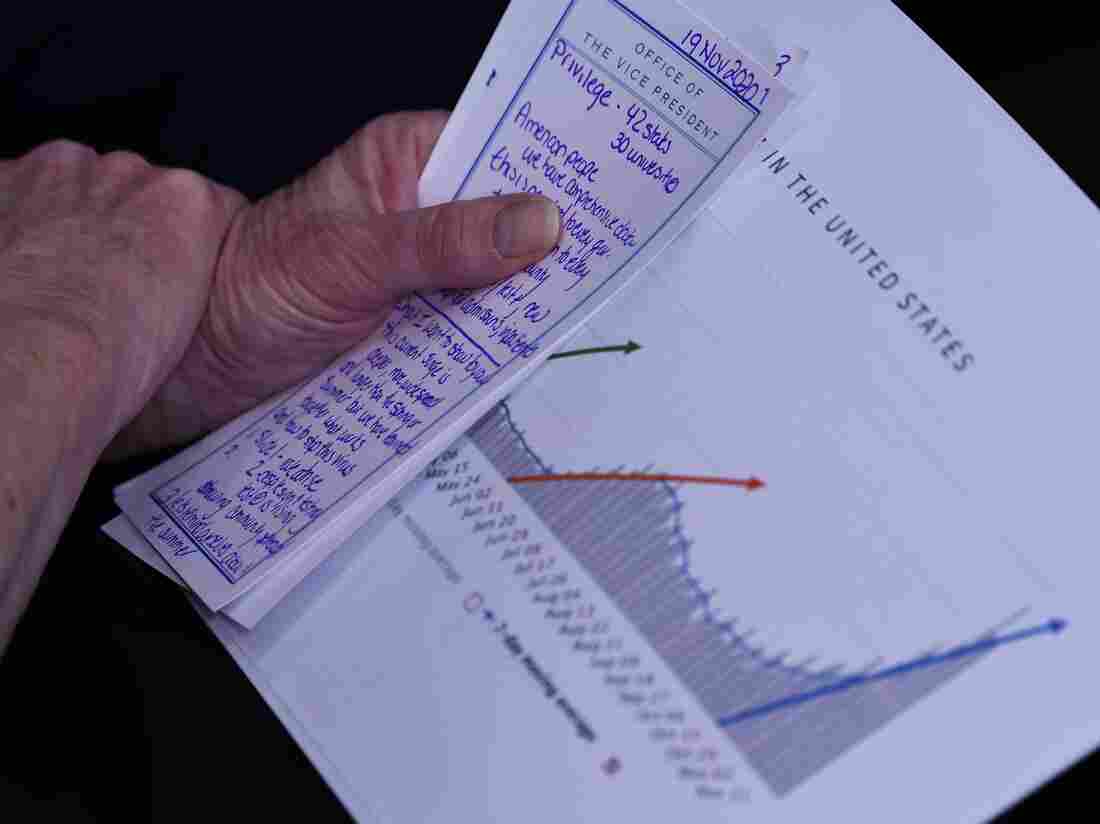 Dr. Deborah Birx, the coordinator for the White House coronavirus task force, holds a graph showing the spike in infections during a briefing on Thursday. Brendan Smialowski/AFP via Getty Images hide caption 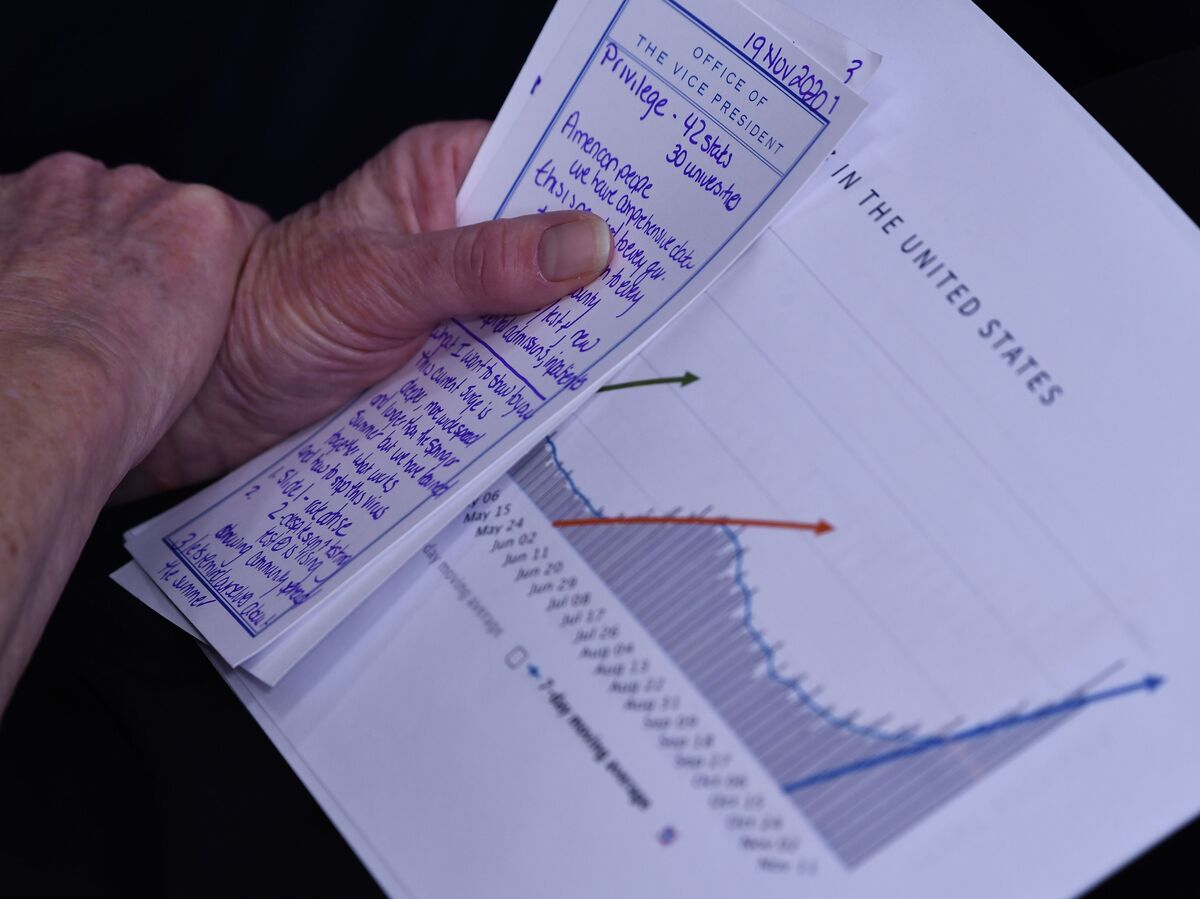 Dr. Deborah Birx, the coordinator for the White House coronavirus task force, holds a graph showing the spike in infections during a briefing on Thursday.