Accessibility links
'Welcome To The Party, Zoom': Video App's Rules Lead To Accusations Of Censorship The videoconferencing app banned a Palestinian activist who is a member of a U.S.-designated terrorist group. Now, the company's policies are being questioned. 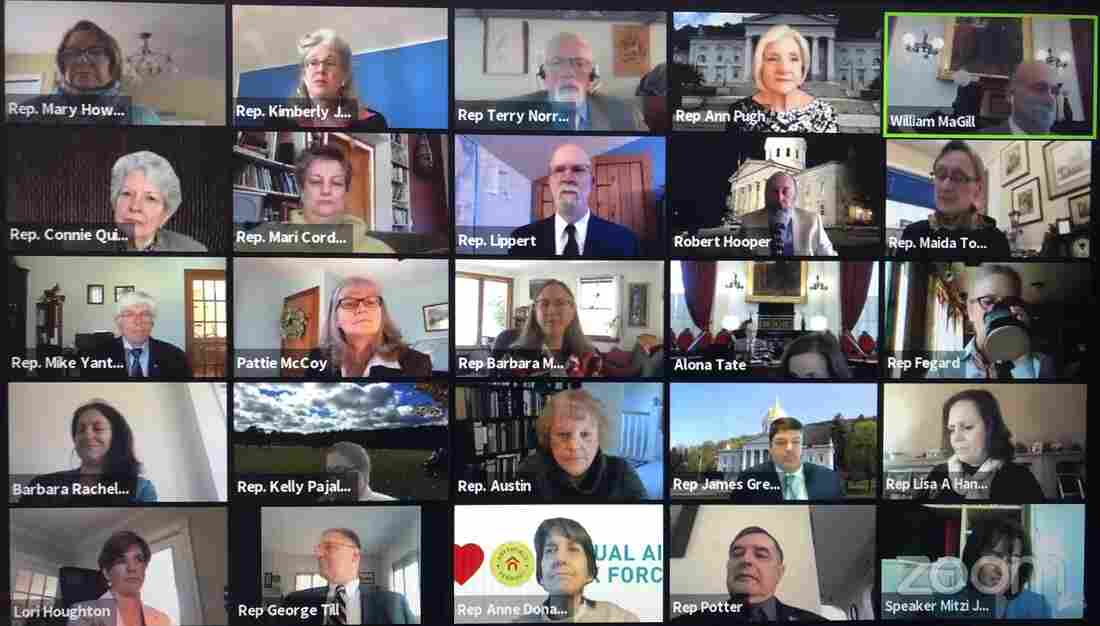 Zoom videoconferences are a staple of the coronavirus pandemic. Above, members of the Vermont House of Representatives met on Zoom in April. Wilson Ring/AP hide caption 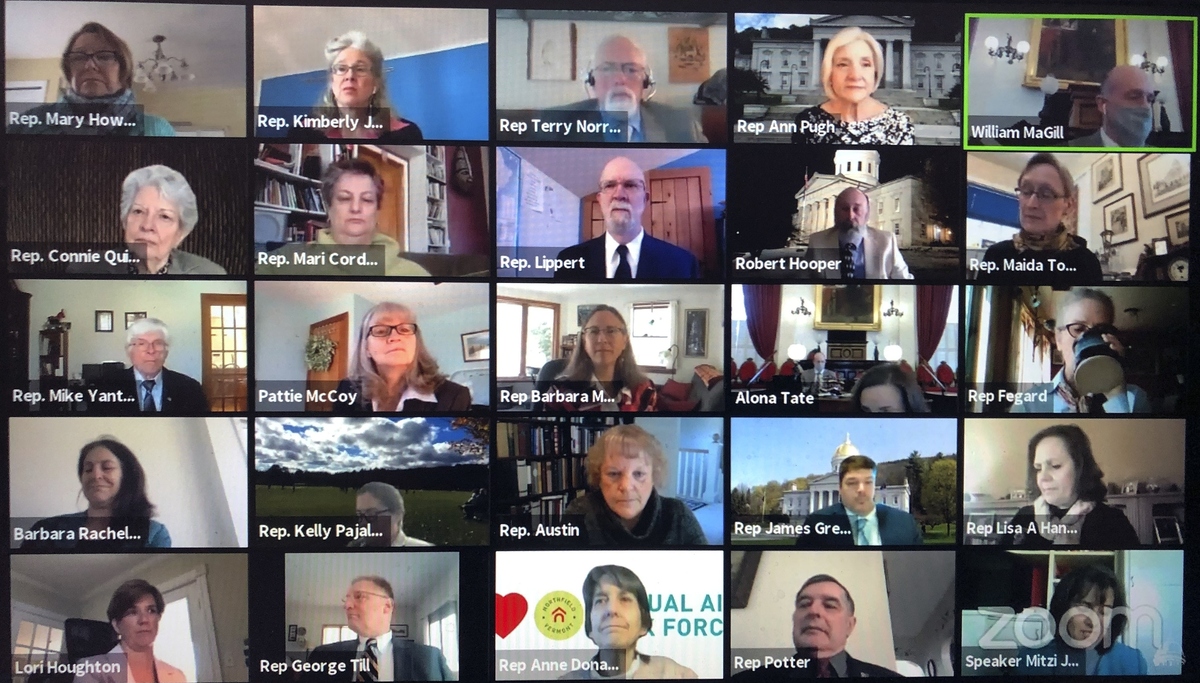 Zoom videoconferences are a staple of the coronavirus pandemic. Above, members of the Vermont House of Representatives met on Zoom in April.

Now that the coronavirus pandemic has transformed Zoom from a corporate videoconferencing app into a ubiquitous tool for governments, schools, karaoke parties and even "Zoomsgiving" celebrations, the company is having to do the dicey work of deciding what is permitted on its platform.

And not everybody is allowed on it.

And just as social media companies draw critics' ire when they flag a post or ban a user, Zoom is now being accused of censorship after refusing to host a speech by a controversial Palestinian activist. The episode is raising questions among technology experts about whether and how Zoom sessions should be regulated.

In September, Zoom blocked a speaking event featuring Leila Khaled, a member of the Popular Front for the Liberation of Palestine, which the U.S. has designated a terrorist group. Khaled, now 76 years old and living in Jordan, is notorious for hijacking a plane in 1969 and attempting to do it again a year later.

Rabab Abdulhadi, a professor at San Francisco State University's College of Ethnic Studies, planned an "open classroom" event in which Khaled was to participate.

But the night before the event, Abdulhadi received a message from the university's provost: Zoom was canceling the livestream over legal concerns.

Abdulhadi says she was told, "We might be implicated in criminal activities of material support for terrorism and that might include imprisonment and a fine." 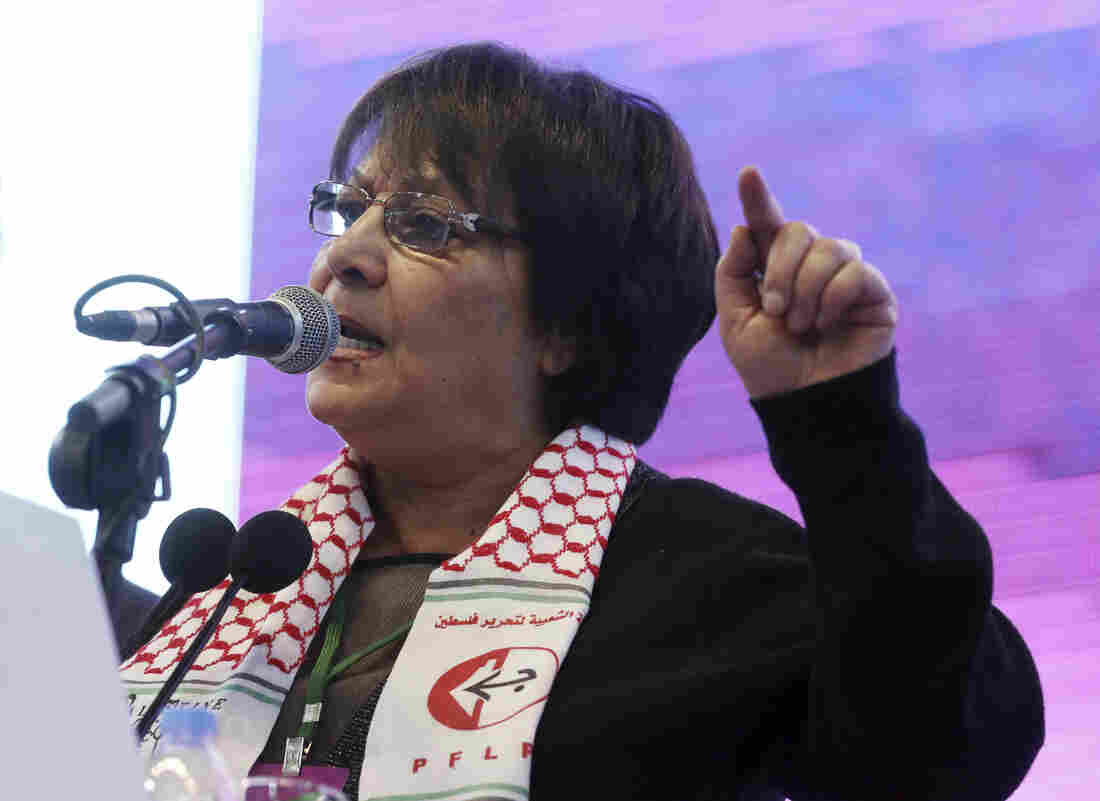 Leila Khaled, an activist and prominent member of the Popular Front for the Liberation of Palestine, speaks during an event in February 2018. Burhan Ozbilici/AP hide caption 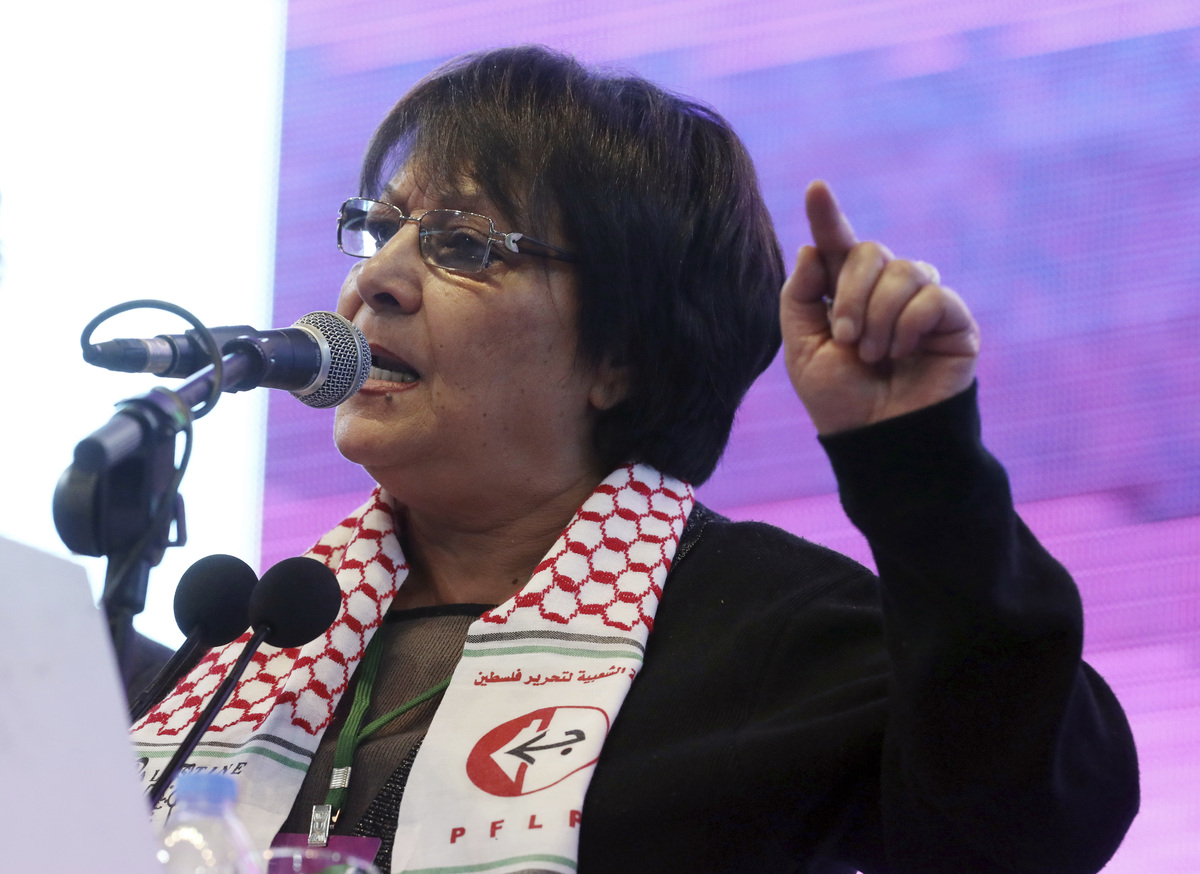 Leila Khaled, an activist and prominent member of the Popular Front for the Liberation of Palestine, speaks during an event in February 2018.

Abdulhadi didn't fear those consequences. She says her own lawyers had assured her that inviting Khaled to speak publicly is not tantamount to providing material support to terrorists, as broadly defined in a federal statute that prosecutors have used to arrest individuals for everything from fighting alongside terrorist groups to exchanging Twitter messages with them.

To Abdulhadi, Khaled is a feminist icon and radical nationalist whose planned talk on resistance movements had captured wide attention. Some 1,500 people had RSVP'd to tune in to the event on Zoom.

"They do not have the right to use their being a platform to veto the content of our classroom and thus actually impinge on our academic freedom," Abdulhadi said of Zoom.

Legally, Zoom cannot tell Abdulhadi what to teach. But it can decide who is and is not allowed to speak on its platform.

The Lawfare Project, a pro-Israel think tank and litigation fund, pressured Zoom to block the event, arguing that hosting Khaled was a legal liability. It organized a protest in front of Zoom's headquarters in September.

"If your interest is in having an academic discussion about controversial issues, go ahead. But that doesn't mean that you have the right to assist a designated terrorist group in carrying out their mission," Brooke Goldstein, the think tank's executive director, said.

The Lawfare Project claimed victory after Zoom shut down the event.

In a statement, a Zoom spokesperson said the San Francisco State University roundtable violated the company's terms of service because Khaled is a member of a U.S.-designated foreign terrorist organization.

"Zoom let SFSU know that they could not use Zoom for this particular event," the spokesperson said.

The company said there were 10 subsequent events planned related to Khaled. Khaled was set to speak at three of them. Those three events were also banned from the platform.

"The other seven events did not publicize any appearance from Ms. Khaled and were therefore able to be hosted on Zoom," according to the company's statement.

Officials at Zoom say the company does not monitor the content of video chats and took action on the planned Khaled events only after being notified about them.

"What does it mean for the future of communication?"

Zoom felt similar heat this summer after it shut down meetings commemorating the Tiananmen Square massacre at the request of the Chinese government. But while social media companies have long been in the middle of debates over content rules, this is a relatively new predicament for Zoom.

There is a case to be made, Keller said, that Zoom's rules of engagement should be distinct from those of Facebook or Twitter because the services function differently.

"Do we want Zoom to be the content police or the speech police? Because we're all so dependent on them," Keller said. "They are functioning in a way that for previous generations the postal service or the phone company functioned."

Zoom may act like a phone company to millions, but it is not a utility. It can face criminal prosecution if it is not careful with the content it permits. But like other online platforms, Zoom is protected by law from civil lawsuits over what people say and do on its platform.

Faiza Patel with New York University's Brennan Center for Justice says there have to be rules, since the notion of good speech being able to counter bad speech falls apart when there is just so much content. And outlandish and conspiratorial material can often overpower everything else.

"I think we're all kind of struggling to figure out how to maneuver in this space, which is quite different than what we've had before," Patel said.

Patel said tech companies' terms of service usually espouse support for robust free speech and debate. Stopping someone from communicating to others can appear to contradict those values.

"That obviously creates a question about, 'Well, are you really allowing the full extent of the conversation?' " Patel said.

Back at San Francisco State University, Abdulhadi is looking for an open-source alternative to Zoom that does not, as she sees it, silence political speakers.