Accessibility links
With Many Stores Closed, Salvation Army's Bell-Ringing Campaign Suffers With traffic down at stores and malls across the nation during the pandemic, the charity's iconic red-kettle campaign might bring in half the donations compared with last year. 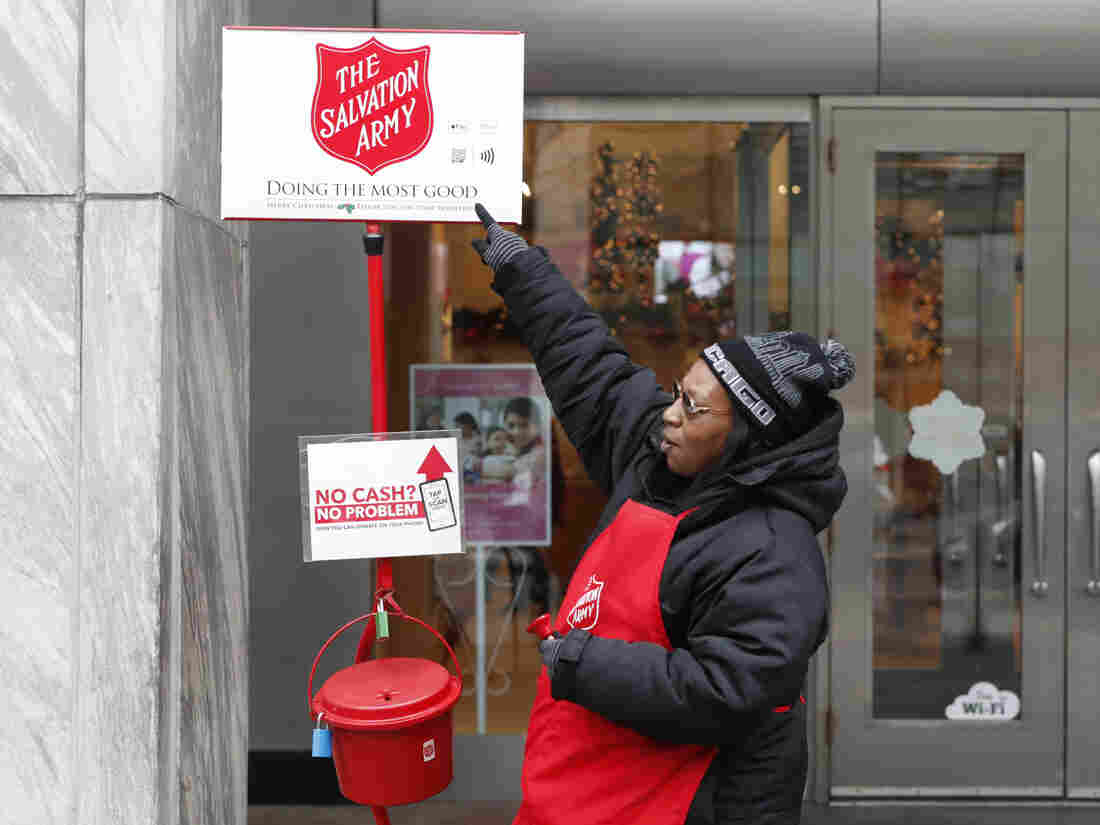 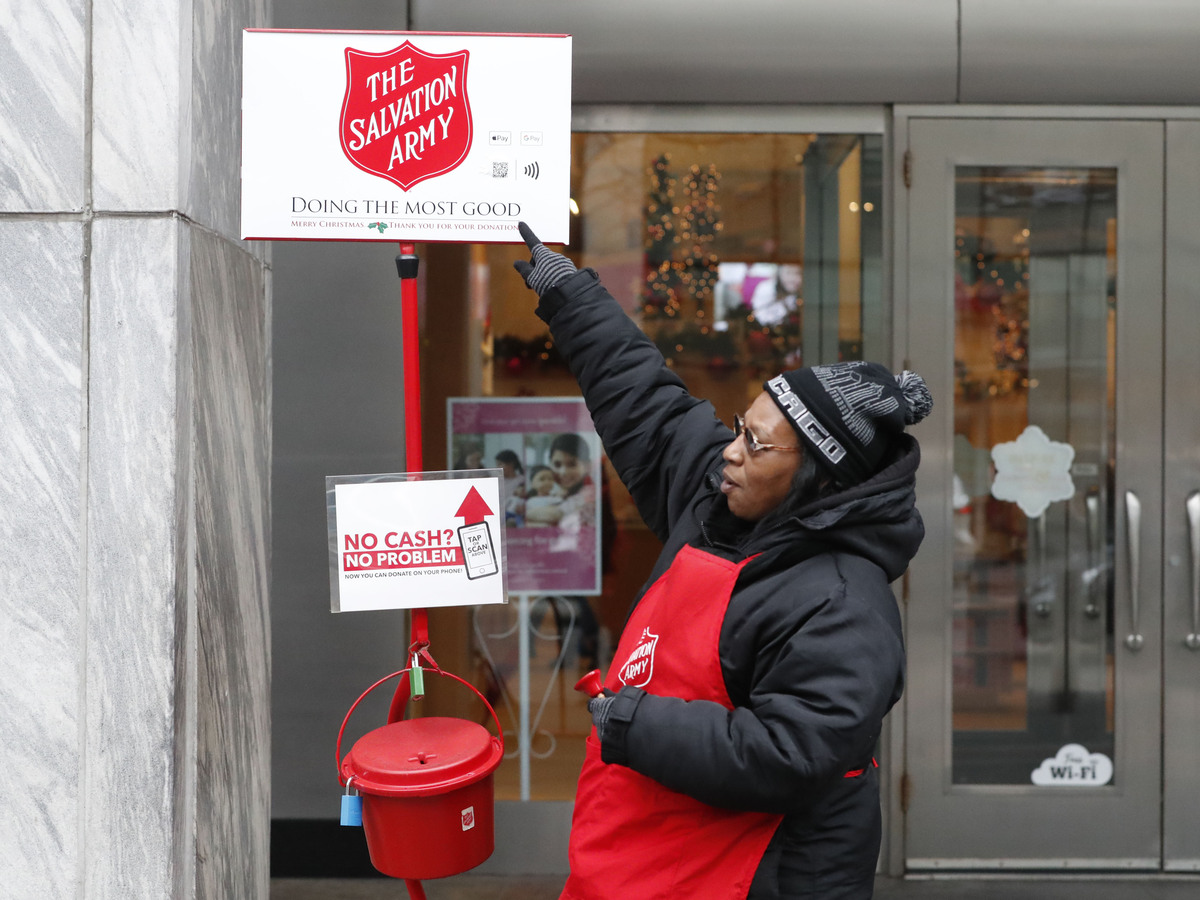 The Salvation Army's red-kettle campaign is expecting fewer donations and volunteers this year as a result of the coronavirus pandemic.

The Salvation Army's bell ringers, a longtime fixture outside malls and stores around the U.S., are a staple holiday tradition. But this year, with the coronavirus pandemic raging and many stores closed, people won't be hearing as many of those bells ringing.

The charitable organization relies on its red-kettle campaign's donations to raise enough money to help millions of Americans around the holidays. That's especially true this year, with so many people out of work and suffering financially. So with store traffic — and red-kettle donations — down, the charity is turning to technology and its enthusiastic volunteers to keep the tradition going.

The familiar red-kettle campaign's roots go back more than a century.

In 1891, Joseph McFee, a Salvation Army captain, was bothered by how many people in San Francisco were going hungry. He decided he wanted to give people a free Christmas meal. McFee raised the money by putting a pot out at the Oakland Ferry Landing with a sign that said, "Keep the Pot Boiling." The tradition has been going ever since.

'All Giving Is Very Necessary.' Ways To Give To Charity During The Coronavirus Crisis

Last year, the Salvation Army's bell ringers raised $126 million. But so far in 2020, cash contributions have fallen sharply because of the pandemic, though there has been an increase in clothing donations.

"Right now, we are anticipating the red-kettle campaign will bring in about 50% less than last year," says Kenneth Hodder, the Salvation Army's national commander.

He says donors have been contributing generously online, but the amount of money coming in won't be enough to cover the Salvation Army's needs for the holiday season. So the organization will be relying on even more online efforts than ever before.

"We cannot possibly do everything the public expects us to do unless we come up with different ways by which they can support our work," Hodder says.

The red-kettle campaign will still happen this year, with all volunteers required to wear masks and be properly socially distanced. Donors don't have to touch the kettles if they don't wish to. There will be a QR code on every kettle, allowing people to donate electronically using their smartphones. And the organization is creating different methods for people to donate, including a red-kettle challenge. This allows people to donate online or be a virtual bell ringer.

Hodder says he's expecting a very demanding holiday season given the pandemic's toll on the economy.

"Last year, the Salvation Army nationwide served about a million meals a week," he says. "Over the last seven months, with the pandemic, we've served more than 100 million meals."

Normally, about 2.5 million people come to the Salvation Army for help during the holidays, Hodder says. This year, the organization projects an additional 4 million.

"So we're looking at potentially 6.6 million people who don't have money for rent or utilities, can't buy Christmas gifts for their children, put food on the table and other problems that come up," Hodder says. "These are all people who need our help."

The Salvation Army relies on the money made from its own stores to assist with the holidays, but this year will be different since many of those stores closed because of the pandemic.

Amid the closings related to the pandemic, Hodder says he doesn't think the cash donations the organization has received will be enough to replace what the stores usually bring in.

Some locations have allowed the red kettles to be put out earlier, but this year a few retailers have limited the number of days the organization can be in front of their stores, says Salvation Army Maj. Donald Dohmann, an area commander in Hampton Roads, Va.

Typically in his area, the red-kettle campaign begins the first weekend of November. But this year, some retailers have asked for it to be delayed until after Thanksgiving for coronavirus safety reasons.

"We're essentially losing a month of bell ringing," Dohmann says. "Topped with fewer volunteers, I am definitely a little concerned."

He says the Black Friday weekend is usually a big one for the kettles. But because of the pandemic, some retailers aren't participating in Black Friday, cutting foot traffic.

And the national coin shortage is making things worse. "People usually put their loose change into the kettles, but if they don't have any, they might not donate," Dohmann says.

Another concern for the Salvation Army is the yearly Angel Tree program. Corporations and people can adopt these angels — families, children and seniors in need — and buy Christmas gifts off the angels' wish lists. Lt. Chantel Millin, a corps officer at a Houston area Salvation Army, says she has already seen a decline in the number of angels adopted compared with previous years.

"We're honestly just trusting and having faith that our community will pull through. And we usually do," she says. "This year has been tough for everyone, especially our children and seniors. They deserve this."

Though there are fewer volunteers than in previous years, many are still excited to help. Last year, the Salvation Army had more than 25,000 volunteers for the red-kettle campaign. 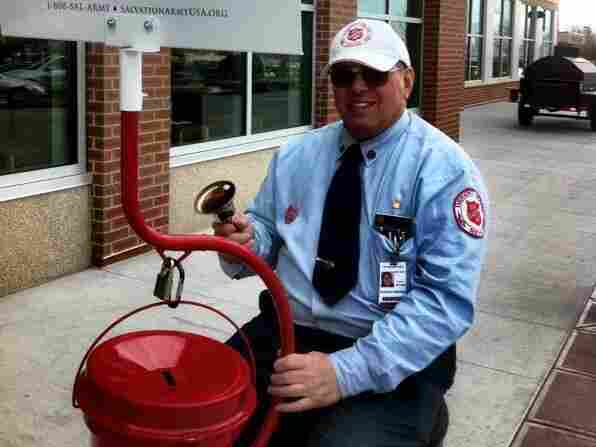 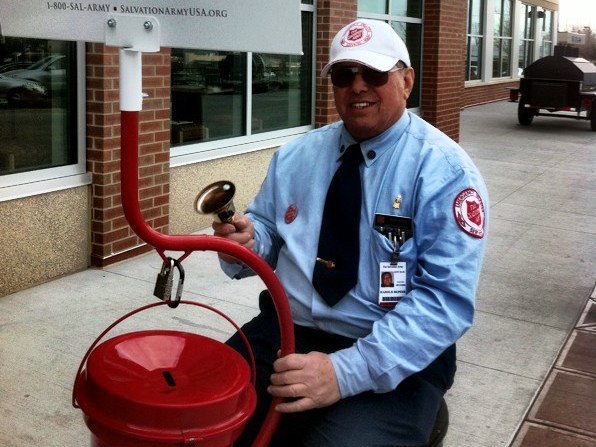 Harold Hepfer ringing his bell for the Salvation Army's red-kettle campaign a few years ago.

Harold Hepfer, 81, a Salvation Army volunteer in the Kansas City area, has been ringing bells for the organization for 41 years.

"I'm gonna wear my mask, gloves and ring my bell," Hepfer says. "I think this is really important because it takes money to help. And right now a lot of people need help."

Jo-Ann Lessa, a Salvation Army volunteer in New Bedford, Mass., has received help from the organization for years. This year she's taking the opportunity to give back. Lessa and her family started delivering boxes of food with her van. Lessa is doing all of this while waiting for a kidney transplant that has been delayed because of the pandemic.

"I'm doing this because I want to, not because I have to or anything like that," she says. 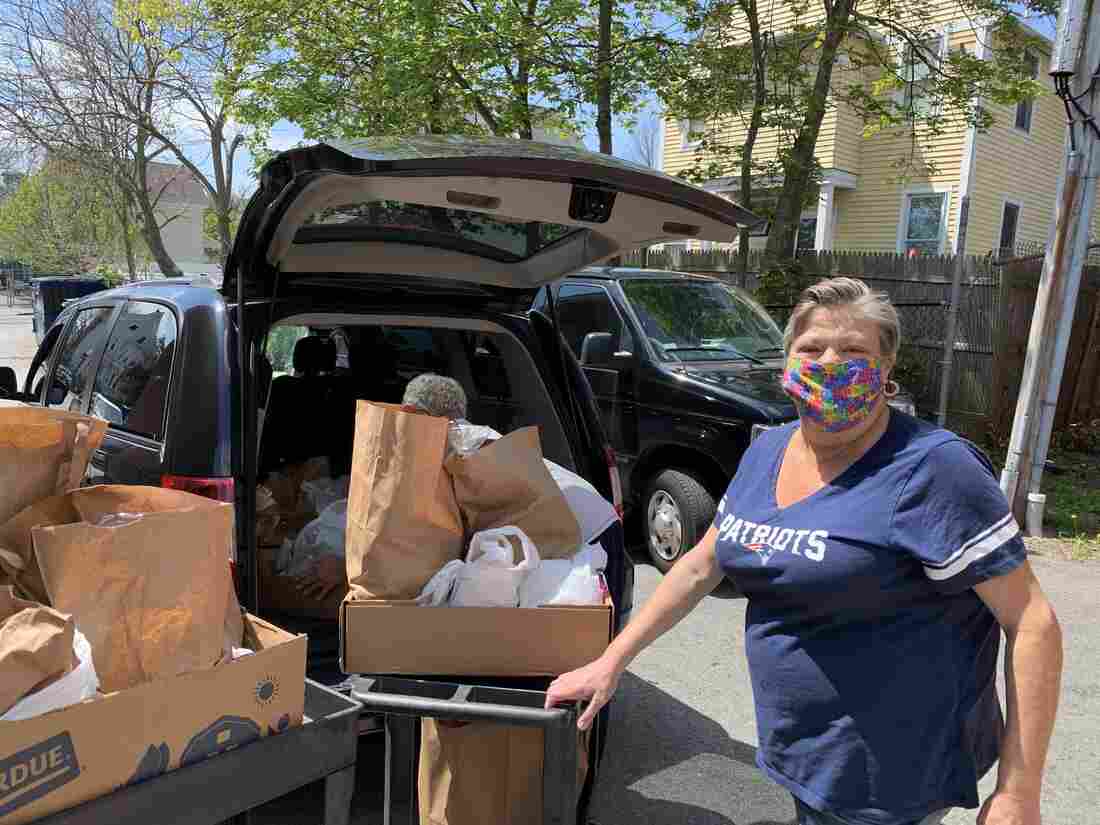 The Salvation Army isn't the only charity that has been faced with a demanding year. Feeding America, a nationwide network of 200 food banks, is struggling to keep up with soaring needs, while also dealing with a decrease in food donations.,

"Typically, we operate with more donated foods, and maybe we'll pay for the cost of transportation. We are spending more money on actually purchasing outright truckloads of food," says Zuani Villarreal, the director of communication at Feeding America. "We're probably purchasing about 30% more compared to last year."

Villarreal says food insecurity isn't a new thing, but the pandemic has just shined a brighter light on the cracks in the system. About 35 million Americans were food insecure and faced hunger last year. She says that this year, the group's research shows, because of the pandemic the number is likely to increase to 50 million.

"And this was despite all of our and many other food banks' efforts," Villarreal says.

Commander Hodder says he believes the Salvation Army will be able to rescue the holidays.

"We are in the midst of a challenging period, but if all of us can come together right now and do something for the need of our neighbors, we will be able to pull through," he says.