Accessibility links
Catholics Rethink Pope John Paul II's Legacy After Vatican's McCarrick Report A Vatican investigation into church leaders' failings that allowed the rise of a now-disgraced former U.S. cardinal has led some Catholics to call for "difficult reckoning" with the sainted pope. 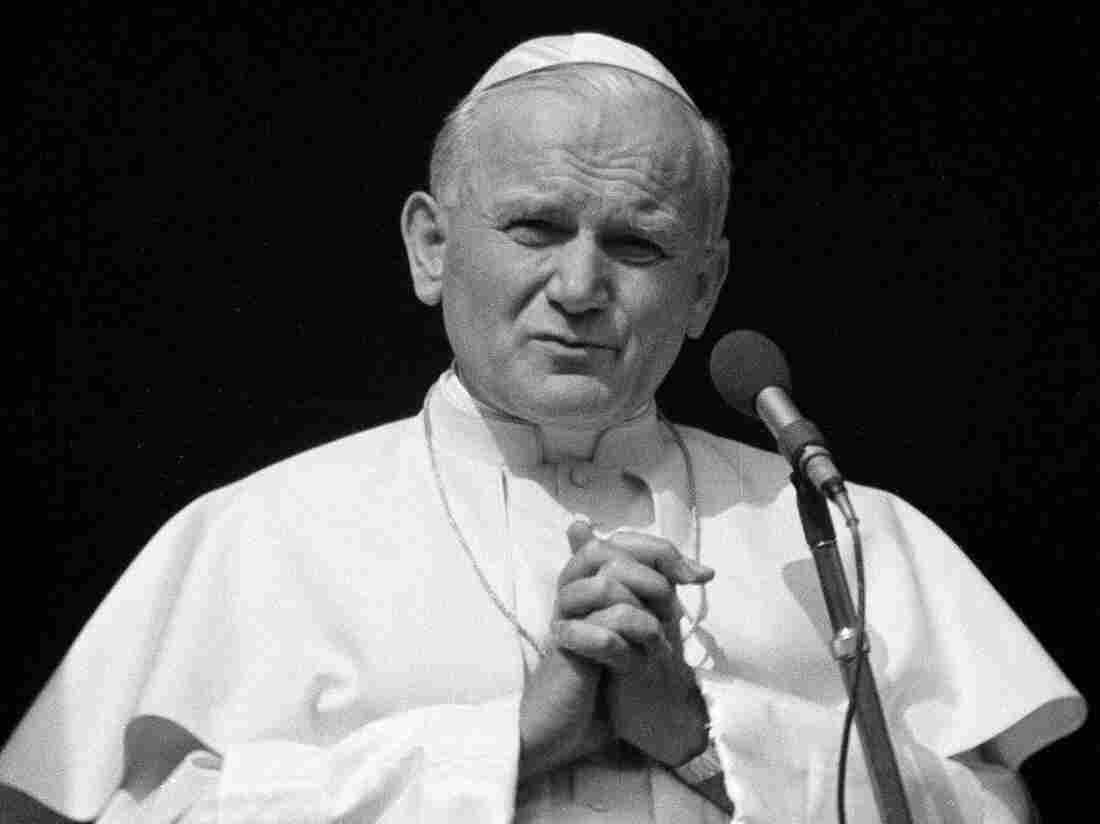 Pope John Paul II addressing a crowd in 1978. A Vatican investigation into church leaders' failings that allowed the rise of a now-disgraced former U.S. cardinal has led some Catholics to call for "difficult reckoning" with the sainted pope. AP hide caption 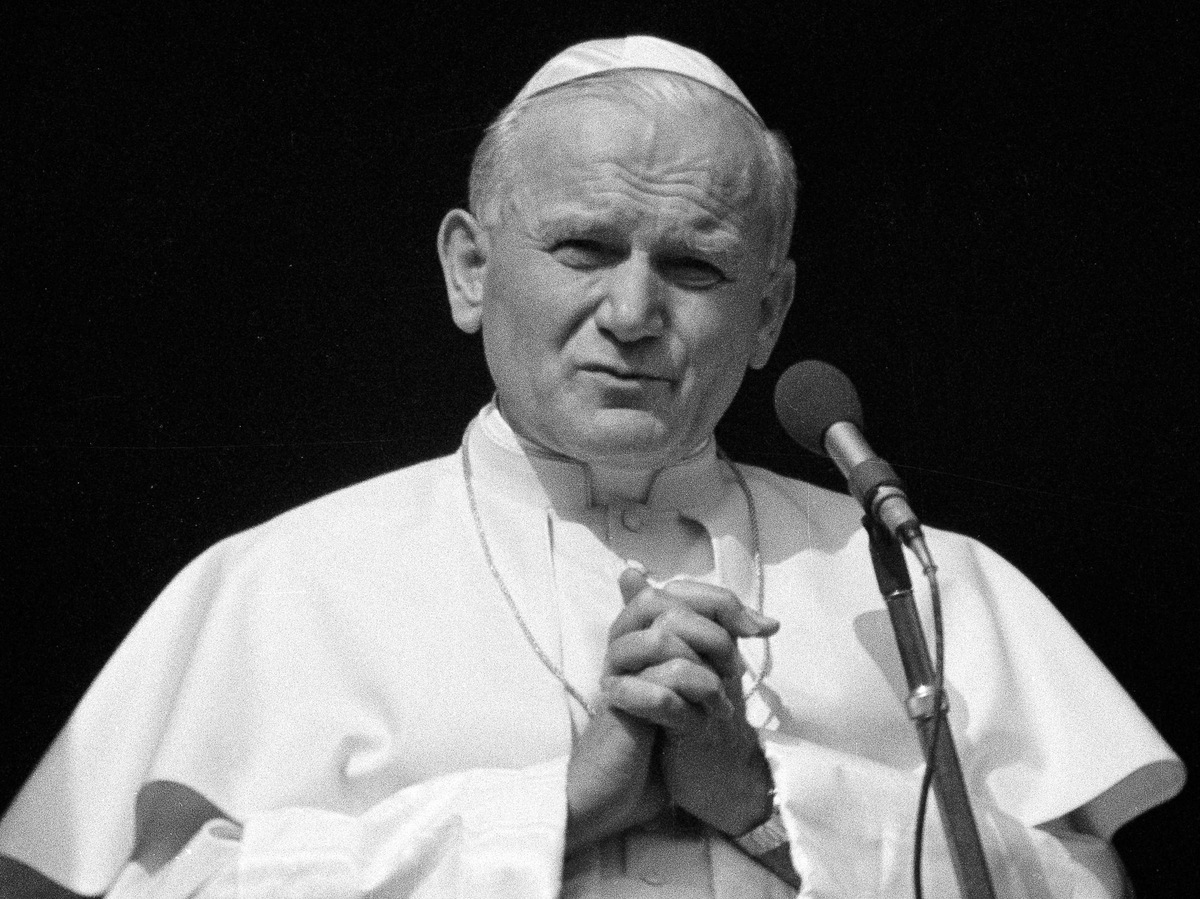 Pope John Paul II addressing a crowd in 1978. A Vatican investigation into church leaders' failings that allowed the rise of a now-disgraced former U.S. cardinal has led some Catholics to call for "difficult reckoning" with the sainted pope.

When St. John Paul II died in 2005 after nearly 27 years on the papal throne, his funeral drew millions to St. Peter's Square. The crowd soon broke out into spontaneous chants of "Santo subito" — "make him a saint immediately."

Days later, John Paul was put on the fast track, becoming a saint a record nine years after his death.

Now, many Catholics wonder whether that was too hasty. A recent report issued by the Vatican is casting a dark cloud over John Paul.

The report is the result of an investigation into Catholic leaders' failings in allowing now-disgraced former American Cardinal Theodore McCarrick to rise up the church hierarchy. Its explosive revelations have started to tarnish the legacy of the Polish-born pope and globetrotting media star who is credited with triggering the fall of communism in Europe.

The more than 400-page report documents that, in 2000, John Paul appointed McCarrick archbishop of Washington despite repeated warnings from church officials about allegations of decades of sexual misconduct.

"Saints are not perfect, but they are models," Schlumpf says. "And I don't think John Paul II is a model of how our Church should be dealing with clergy sex abuse."

Following the McCarrick report, the newspaper called for the suppression of the cult of St. John Paul II.

In Catholicism, Schlumpf says, the word cult means the commemoration and veneration of a saint. Suppression, she adds, would mean schools and churches should not be named after him and devotion should be private.

The newspaper's Nov. 13 editorial said, "It is time for a difficult reckoning." John Paul "put at risk children and young adults in the Archdiocese of Washington, D.C., and across the world. In doing so, he also undermined the global church's witness, shattered its credibility as an institution, and set a deplorable example for bishops in ignoring the accounts of abuse victims."

Schlumpf says, "suppressing the cult of veneration of him would send that message that this is not the kind of behavior we expect from our church leaders in the future."

But suppressing the cult is unlikely to happen in the United States, according to Massimo Faggioli, theology professor at Pennsylvania's Villanova University. John Paul was a champion against communism and "a larger-than-life person," whose influence is vast among conservative and "middle-of-the-road" Catholics alike, he says.

McCarrick — who was defrocked by Pope Francis in February 2019 — is not the only sexual predator John Paul had taken under his wing.

Another was the Rev. Marcial Maciel, the Mexican founder of the Legionaries of Christ, who abused numerous minors and fathered children from different women. Maciel was punished only after John Paul's death.

The McCarrick report suggests John Paul's experience with the secret police in communist Poland may have convinced him that allegations of clerical sex abuse were aimed at damaging the Catholic Church.

But Faggioli says he believes "it has to do more with a clerical culture that is a typical Catholic disease of these last couple of centuries."

Speaking to NPR, Reese says, "John Paul II was incapable of believing that his friends and supporters could be involved in sexual abuse."

He adds, "He thought they were doing wonderful things for the church and he just could not imagine that they could be doing such vile deeds."

"I'm a Catholic theologian, and I personally believe that canonizations are infallible," Goldstein says. "And moreover, there were very well documented miracles."

But she recently tweeted: "I now pray: Dear St. John Paul II, You broke it. You fix it. Amen."

A weird thing about being Catholic is that today's report doesn't change my belief that Pope John Paul II has infallibly been declared a saint.

It does, however, change the way I ask his intercession.

You broke it. You fix it.

When asked if she will continue to pray to him, Goldstein says, "I have a lot of saints whose intercession I prefer to ask before I ask John Paul's."

Nowhere has criticism of John Paul's legacy been as shocking as in his native Poland, where he is hailed as having kept the faith alive and liberating the country from communism.

The Vatican report's release coincided with the growing scandal over Polish pedophile priests and the bishops who allegedly covered up for them.

The bishops include John Paul's longtime personal secretary, the now retired Cardinal Stanislaw Dziwisz. According to the Vatican report, Dziwisz handled the pope's correspondences, including a warning from U.S. Cardinal John O'Connor about allegations against McCarrick, and from McCarrick insisting on his innocence.

Dziwisz, who was appointed cardinal in 2006 by Pope Benedict XVI and retired as archbishop of Krakow in 2016, has denied any wrongdoing.