Accessibility links
Loujain Al-Hathloul: Saudi Arabia Transfers Trial To Terrorism Court The activist's sister tells NPR her parents "saw a very weak, tired, exhausted Loujain" at her court appearance: "They said that her body was shaking, that she could barely hold the papers." 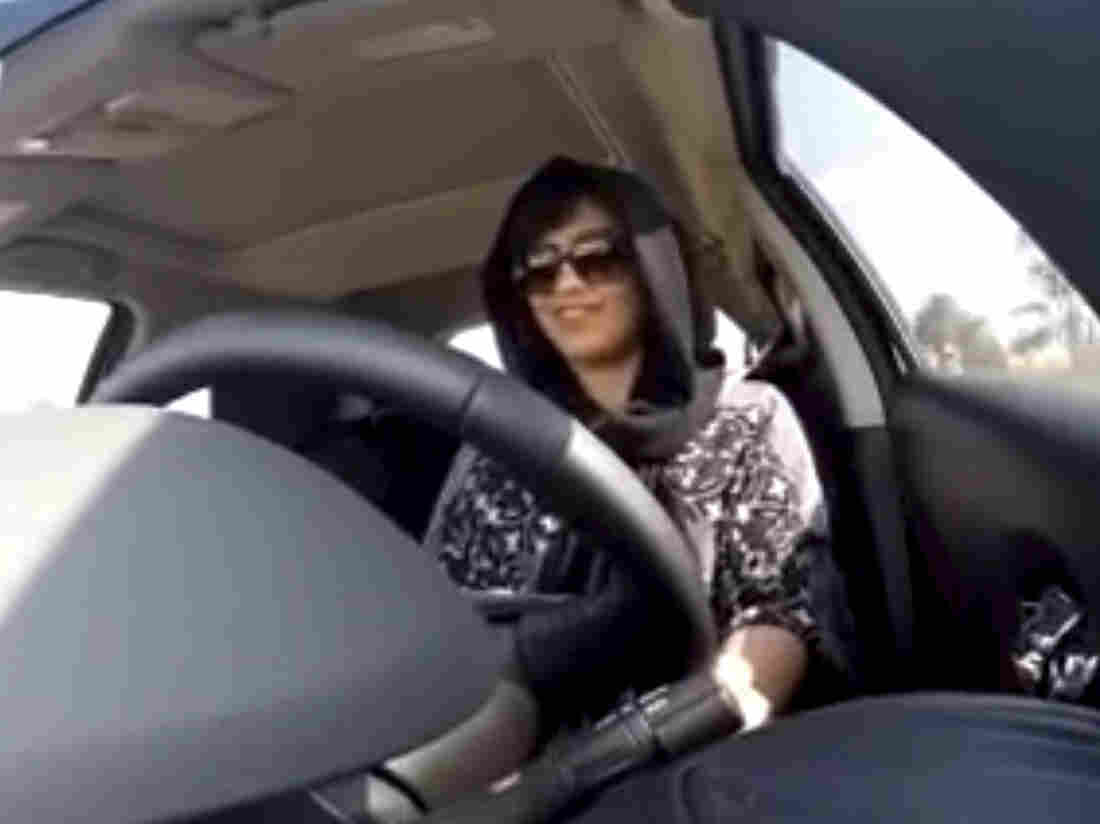 This Nov. 30, 2014 image made from video released by Loujain al-Hathloul shows her driving toward the United Arab Emirates-Saudi Arabia border before her arrest on Dec. 1, 2014, in Saudi Arabia. Al-Hathloul has been imprisoned for over two years and will be tried by a court established to oversee terrorism cases, her family said Wednesday. Loujain al-Hathloul/AP hide caption 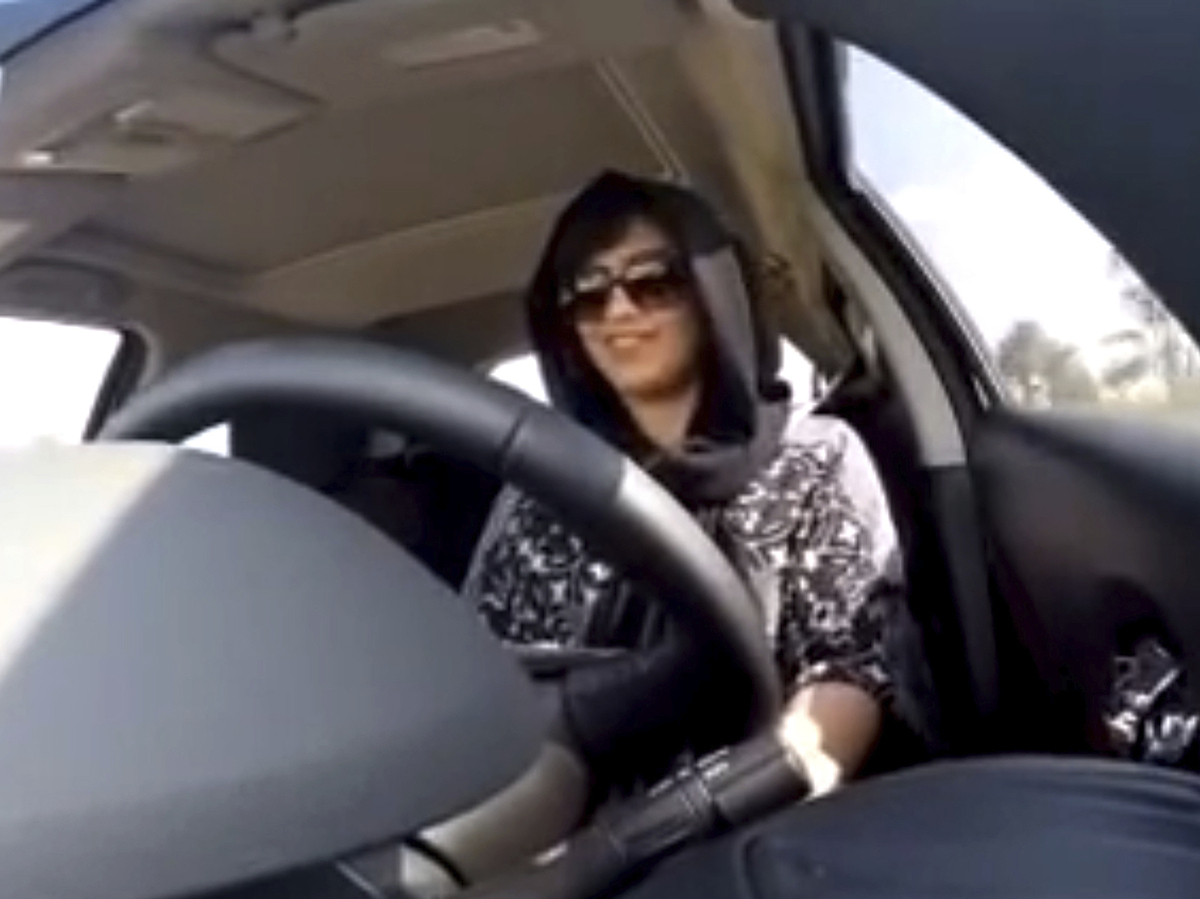 This Nov. 30, 2014 image made from video released by Loujain al-Hathloul shows her driving toward the United Arab Emirates-Saudi Arabia border before her arrest on Dec. 1, 2014, in Saudi Arabia. Al-Hathloul has been imprisoned for over two years and will be tried by a court established to oversee terrorism cases, her family said Wednesday.

Loujain al-Hathloul, the jailed activist who led the charge to allow women to drive in Saudi Arabia, is due to stand trial in a special court that deals with national security crimes and terrorism cases.

Hathloul appeared before a Saudi judge on Wednesday to hear that her case was being transferred to the kingdom's Specialized Criminal Court. It was the first time the 31-year-old activist had been in court in more than a year.

Hathloul and several other female activists were arrested in the spring of 2018, just weeks before Saudi Arabia lifted its ban on women driving. Her sister, Lina al-Hathloul, says her sibling has been tortured in prison and is denied phone calls or visits from her family. She has gone on two hunger strikes over the past year.

Lina al-Hathloul tells NPR by phone from Berlin that her parents were sitting next to Loujain in court on Wednesday and were shocked by her appearance.

"They saw a very weak, tired, exhausted Loujain," she says. "They said that her body was shaking, that she could barely hold the papers."

She says the judge decided the criminal court handling the case lacked jurisdiction so the case was being sent to the terrorism court instead.

Amnesty International called it a "disturbing move." Lynn Maalouf, the group's deputy regional director for the Middle East and North Africa, said in a statement that the terrorism court was "notorious for issuing lengthy prison sentences following seriously flawed trials."

'Won't Give Up': Siblings Of Jailed Saudi Women's Rights Activist Speak Out In U.S.

The decision to transfer Hathloul's case came just three days after Saudi Arabia wrapped up a virtual G-20 summit, in which one event was dedicated to women's empowerment. There were calls ahead of the summit for Saudi Arabia to release all female activists and other jailed government critics. The kingdom rejected those calls.

But the detention of female activists undermines those efforts, says Lina al-Hathloul.

"His whole new women empowerment in Saudi Arabia is only [a] P.R. stunt, to be honest," she says.

The crown prince has cracked down hard on dissent, trying to silence any criticism of him or the government, even from outside the kingdom.

The most prominent vocal critic was Saudi journalist Jamal Khashoggi, who delivered speeches around the world and wrote commentaries for the Washington Post. A Saudi hit team killed and dismembered Khashoggi in October 2018, after waiting for him at the Saudi consulate in Istanbul, Turkey. U.S. intelligence agencies have assessed that the crown prince was involved in the killing.

Saudi Arabia's foreign minister, Adel al-Jubeir, told the BBC last week that Loujain al-Hathloul's detention has nothing to do with her activism. Instead, he said she was detained for "issues related to national security, dealing with foreign entities, supporting entities hostile to Saudi Arabia."

Lina al-Hathloul says it's unclear what will happen next. Her family has appealed to everyone they can inside Saudi Arabia, she says, but to no avail.

"Even the human rights commission in Saudi Arabia that's supposed to save us and protect its own citizens, they have been ignoring us, our requests," she tells NPR. "All the institutions in Saudi Arabia try to cover up what they are doing to women and the women's rights activists."

"We are begging them to reach out to the government to say it's not possible to have a normal relationship with Saudi Arabia when their values and the core of their discussions doesn't include human rights," she says.

President Trump and his son-in-law and advisor Jared Kushner built up a strong relationship with the crown prince. Trump was seen as giving cover to the heir to the throne for Khashoggi's killing and other human rights abuses, as well as for the Saudi-led air campaign in Yemen.

But that could all change with a new administration. During his campaign, President-elect Joe Biden said he would "reassess" the U.S. relationship with Saudi Arabia.