Accessibility links
'We Are Her Work': Remembering Grandma's Legacy Kenneth and Olivia Tan recall her mother, Crescenciana. They called her Lola. She spent her life working to support and care for three generations. Says Olivia: "We are her work." 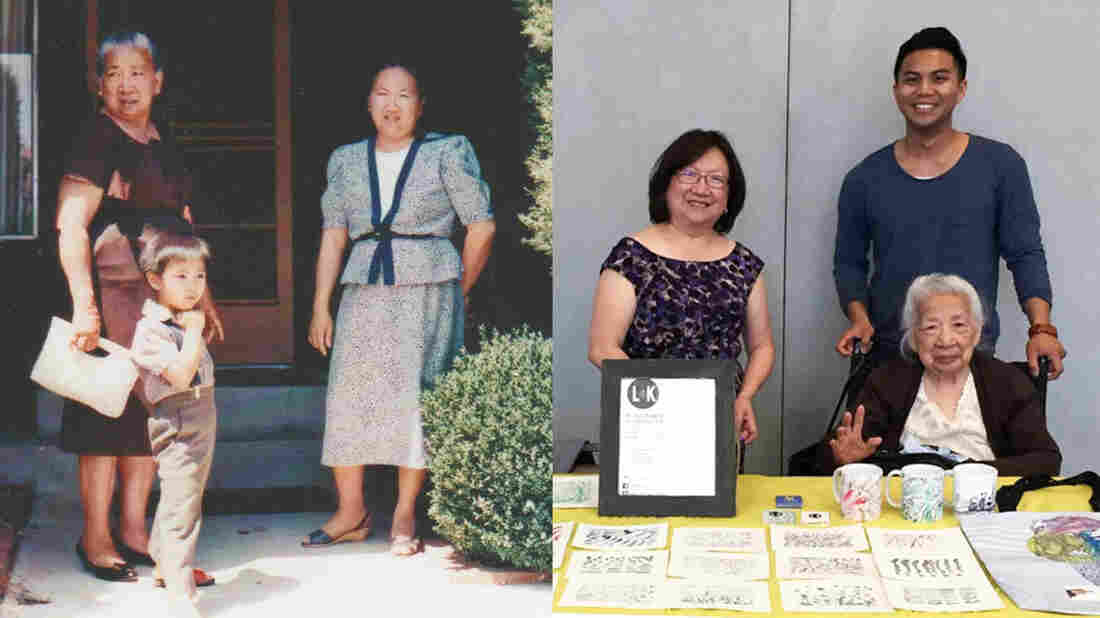 Left: Crescenciana "Lola" Tan with grandson Kenneth and daughter Olivia at their home in San Jose, Calif., in 1990. Right: the family in Oakland, Calif., in 2016. Courtesy of Kenneth Tan hide caption 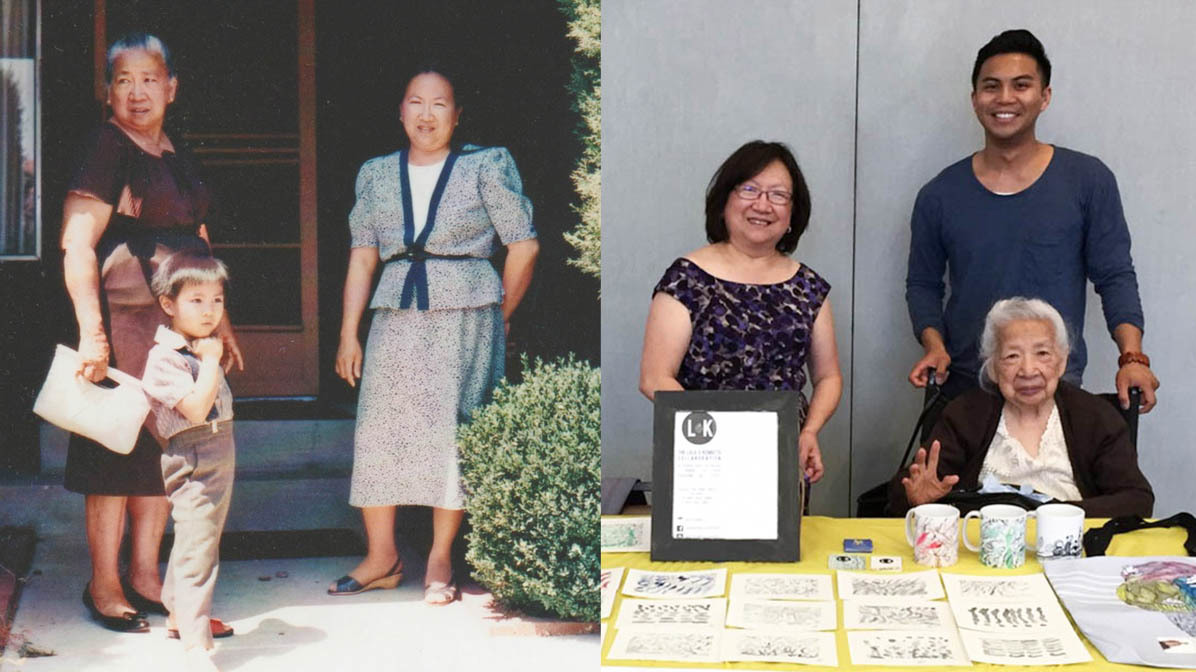 Left: Crescenciana "Lola" Tan with grandson Kenneth and daughter Olivia at their home in San Jose, Calif., in 1990. Right: the family in Oakland, Calif., in 2016.

As the holidays approach, family is on the mind of many. For Kenneth Tan and his mother, Olivia Tan Ronquillo, memories turn to her mother, Crescenciana.

They called her Lola.

She was no stranger to making sacrifices for her family. She spent her life caring for three generations.

Lola grew up in the Philippines, and in 1982, in her 60s, she moved to San Jose, Calif., to live with Olivia – after helping to put her through years of nursing school — and help raise Kenneth and his big sister Audrey.

During a recent StoryCorps conversation, Kenneth and Olivia remember vivid details about Lola — like how they shared a room when he was young. Lola, he says, "would keep the light on every night cause she would be up praying, and the light would still be on in the morning."

And she was always cooking, Olivia remembers.

Kenneth recalls her in the kitchen making hopia, a Filipino bean-filled pastry. She would be "smoothing out the mung bean, making little pockets with the dough and stuffing them in pink doughnut boxes, and she would let me eat the duds," Kenneth says.

She never stopped working, Olivia says of her mother. As a child she worked the rice paddies with her family.

Growing up, Olivia heard stories about the kind of student her mother was. "When she was little," Olivia says, "she was the top student. Especially when it comes to math, nobody could beat her." 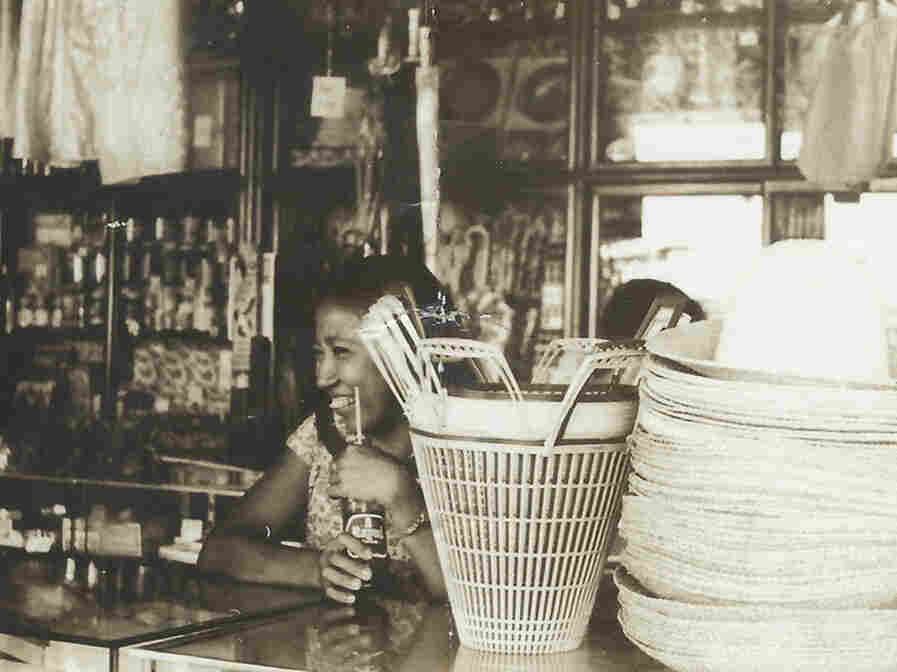 A young Crescenciana Tan working as cashier at a local grocery store in the Philippines in 1960. Courtesy of Kenneth Tan hide caption 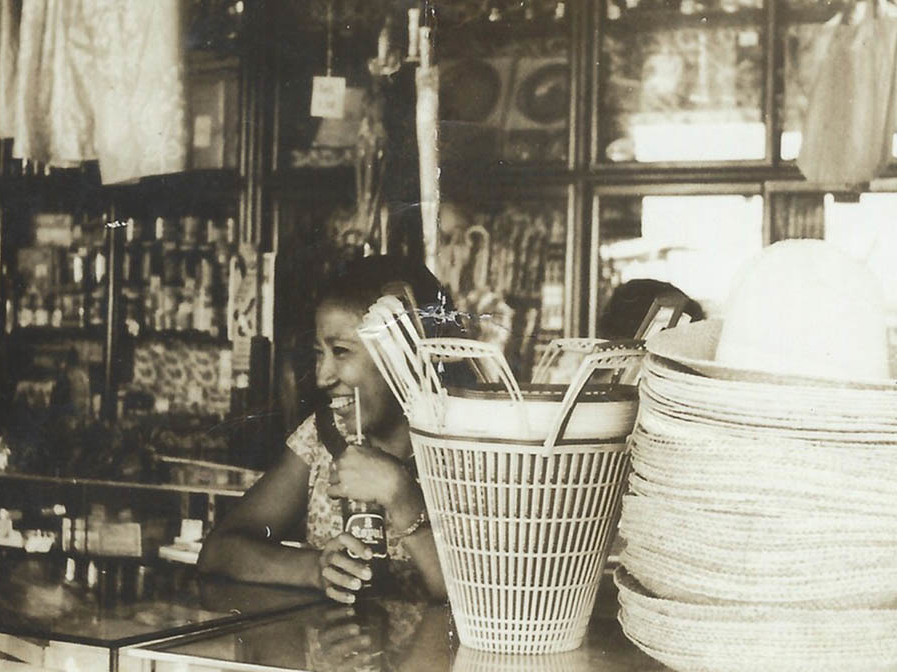 A young Crescenciana Tan working as cashier at a local grocery store in the Philippines in 1960.

But when Lola's father died, she left high school to help support her family.

She did the same when she grew up and had children of her own. She worked to support her kids after her husband got sick. He died when Olivia was just 2 years old, and Lola was left a single mother. To make ends meet, she ran a stall at the local market. She also worked as a store clerk at a grocery store, a sales woman at a bakery and even a live-in house servant.

"Lola, she didn't have the most glamorous jobs, but I think her work was all of us," Kenneth says.

As Lola grew older, she became wheelchair-bound and unable to care for her family like she had been.

In 2014, Kenneth, who had been living in Los Angeles, moved back in with Olivia to help his mother with Lola. "I wanted to come home to help care for Lola because she'd always been the one who took care of all of us," he says.

Olivia agrees: "You're right. We are her work."