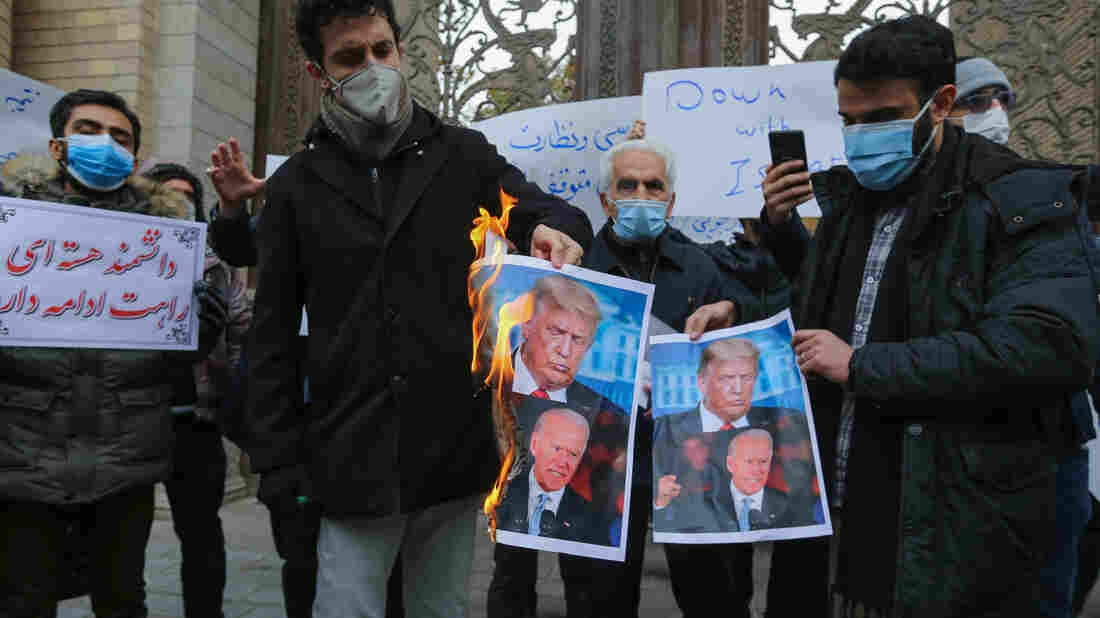 Iranian protesters burn images of President Trump and President-elect Joe Biden during a rally Saturday in Tehran. Iranian leaders have blamed Israel and its close ally, the U.S., for the assassination of a top Iranian nuclear scientist. Atta Kenare/AFP via Getty Images hide caption 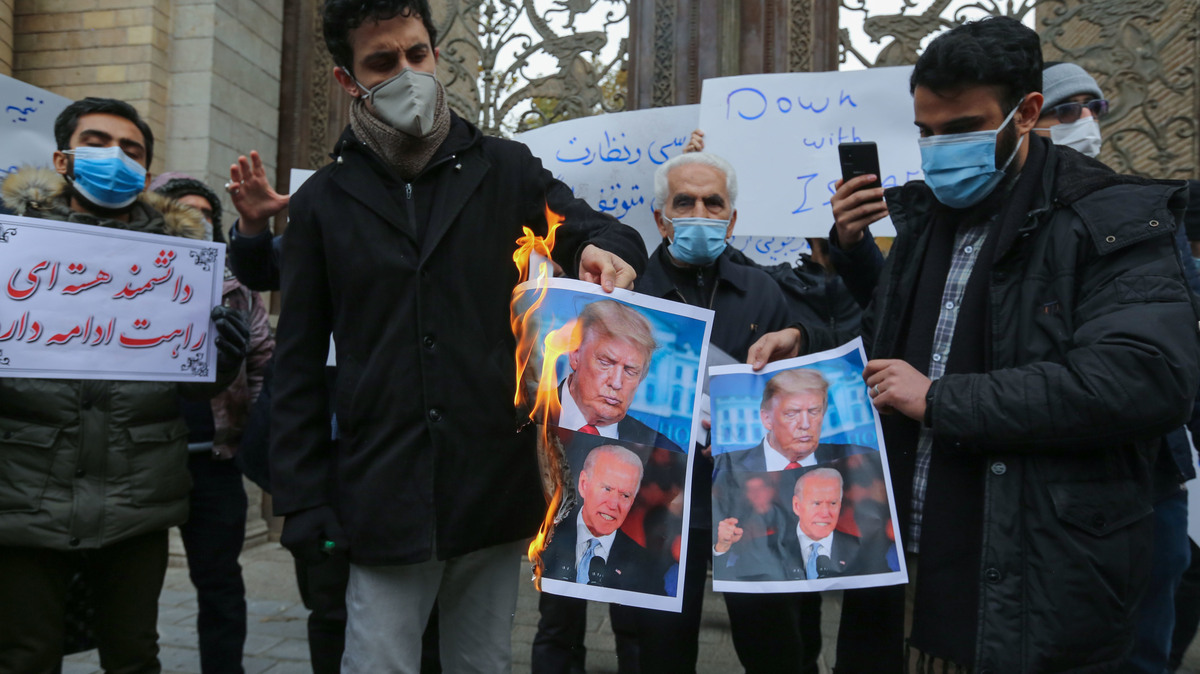 Iranian protesters burn images of President Trump and President-elect Joe Biden during a rally Saturday in Tehran. Iranian leaders have blamed Israel and its close ally, the U.S., for the assassination of a top Iranian nuclear scientist.

One day after the assassination of a prominent Iranian nuclear scientist, the country's leaders have made clear they intend to retaliate for a slaying they blame on Israel.

"All relevant administrators must seriously place two crucial matters on their agenda: 1st to investigate this crime and firmly prosecute its perpetrators and its commanders, 2nd to continue the martyr's scientific and technological efforts in all the sectors where he was active," Iran's supreme leader said on his English-language Twitter account Saturday.

Rouhani, meanwhile, directly named Israel as the suspected perpetrator of what Iranian authorities described as a daytime ambush in Absard, a district east of the Iranian capital. The scientist, who was among several dead, had been singled out by Israeli Prime Minister Benjamin Netanyahu in a 2018 presentation as a leading figure in Iran's alleged efforts to develop a nuclear weapon.

"We will respond to the assassination of Martyr Fakhrizadeh in a proper time," Rouhani said during a televised Cabinet meeting Saturday, according to The Associated Press. "The Iranian nation is smarter than falling into the trap of the Zionists. They are thinking to create chaos."

He did not offer a specific time frame for the suggested reprisal. Neither Israel nor the U.S., a close ally, has commented publicly on the killing.

The rhetorical volleys from Iran's leadership have stirred fears of renewed violence in the Persian Gulf, which saw a similar flare-up of tensions at the start of the year. In January, a U.S. drone strike killed a top Iranian general, Maj. Gen. Qassem Soleimani, which, in turn, drew an Iranian retaliation against U.S. military bases in Iraq. Dozens of service members were diagnosed with mild traumatic brain injury after the Iranian missile attacks.

Many observers are now concerned there may be further violence in store — though the American presidential election may have affected the calculus for Iranian leaders. Whereas in January they were confronting a hard-line Trump administration that had pulled the U.S. out of the 2015 nuclear deal, now the incoming Biden administration could be moving toward an eventual U.S. return to the deal and a reprieve from sanctions.

Karim Sadjadpour, a senior fellow at the Carnegie Endowment for International Peace, told NPR's Weekend Edition that at the same time, Iranian leaders are also feeling domestic pressure to launch a violent reprisal.

"It's going to be difficult to reconcile these two impulses," Sadjadpour said, "because if they do indeed retaliate against Israel or the United States, it's going to make it more difficult to get that return to the nuclear deal."

Partly for that reason, some analysts are suggesting that ratcheting up tensions between Tehran and Washington was precisely the point of the killing.

"Israeli leaders have long been concerned about the Iran nuclear deal," Sadjadpour said. "There [were] probably few things that could have done it more effectively."

Some international leaders have scrambled to tamp down the simmering antagonism. In a statement Saturday, a spokesperson for the European Union's diplomatic arm described the assassination as a "criminal act" that "runs counter to the principle of respect for human rights the EU stands for."

"In these uncertain times, it is more important than ever for all parties to remain calm and exercise maximum restraint in order to avoid escalation which cannot be in anyone's interest," the statement said.