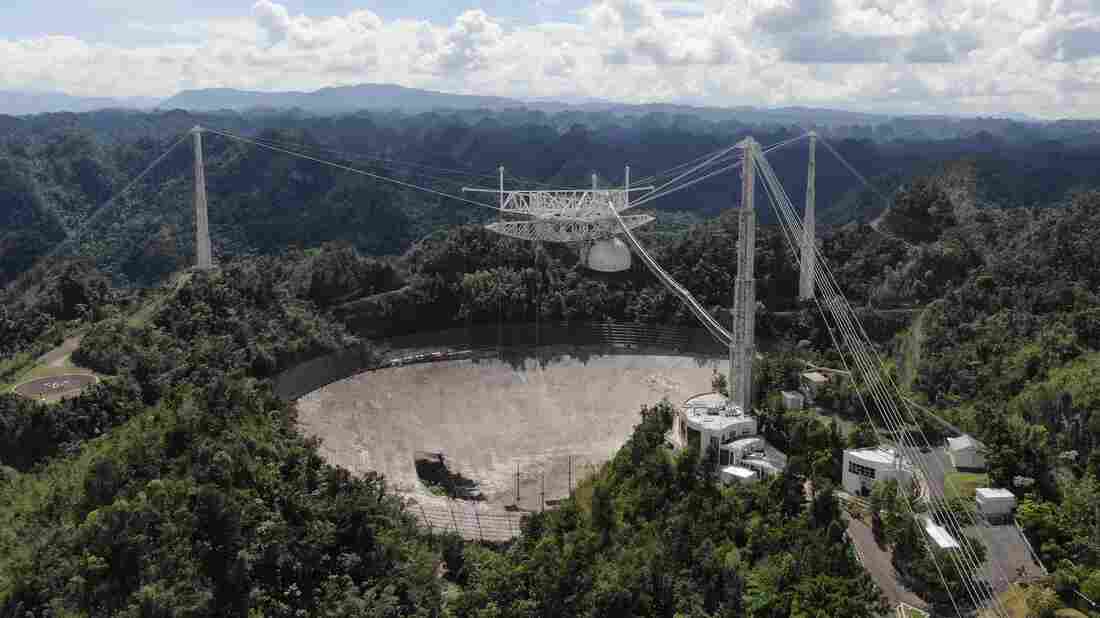 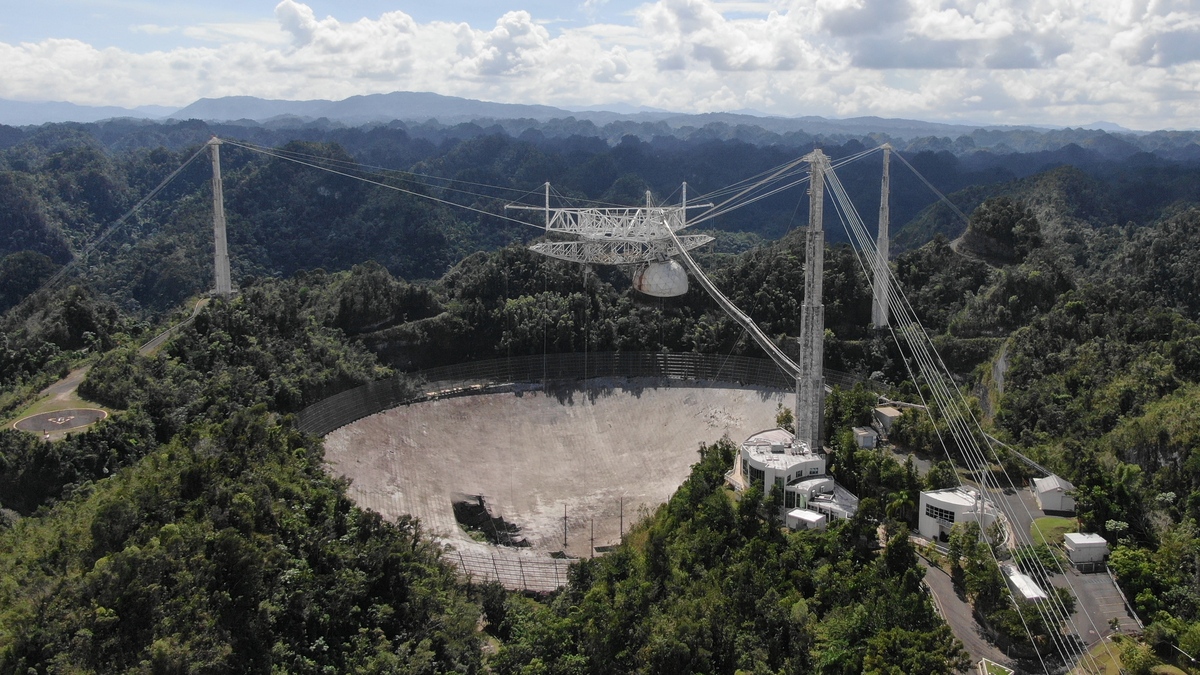 The Arecibo Observatory's mammoth telescope collapsed overnight. It's seen here in November, after a cable damaged its dish.

The Arecibo Observatory in Puerto Rico has collapsed, after weeks of concern from scientists over the fate of what was once the world's largest single-dish radio telescope. Arecibo's 900-ton equipment platform, suspended some 500 feet above the dish, fell overnight after the last of its healthy support cables failed to keep it in place.

No injuries were reported, according to the National Science Foundation, which oversees the renowned research facility.

"NSF is saddened by this development," the agency said. "As we move forward, we will be looking for ways to assist the scientific community and maintain our strong relationship with the people of Puerto Rico."

The dramatic collapse was captured on video, showing the mammoth structure falling in the early morning, after the last of its cables unraveled. The NSF released footage taken from two cameras, one on the ground and another mounted on a drone.

The Arecibo Observatory had been slated last month to be withdrawn from service, with the NSF citing the risk of an "uncontrolled collapse" because of failures in the cables that suspended the platform and its huge Gregorian dome above the 1,000-foot-wide reflector dish.

Ángel Vázquez, the observatory's director of telescope operations, says he was in the control room area when the equipment began to plummet to the ground. In an interview that was posted to Twitter by scientist Wilbert Andrés Ruperto, Vázquez says he and other staff members had been in the process of removing valuable equipment from the facility when they heard a loud bang outside.

"When we looked outside the control room, we started to see the eventual downfall of the observatory," Vázquez said. He added that strands of the remaining three cables had been unraveling in recent days, increasing the strain. And because two of the support towers maintained tension as the collapse occurred, some of the falling equipment was yanked across the side of the dish rather than falling straight down through its focal point.

"This whole process took 30 seconds," Vázquez said, "and an unfortunate icon in radio astronomy was done."

Vázquez said he has worked at the facility for 43 years, starting soon after college.

The massive reflector dish is made up of perforated aluminum panels, leaving an expanse of greenery underneath. But many of those panels have now fallen to the earth.

The telescope's trademark dish, nestled amid thick tropical forest, was left with a huge gash in August after a cable fell and slashed through its panels. After a main cable snapped in early November, officials said they saw no way to safely preserve the unstable structure.

Instead, they were hoping to keep the visitors center and other buildings operational. But they also noted it would take weeks to work out the technical details of a plan.

A record of discovery

In Arecibo's nearly 60 years of operation, the observatory's powerful capabilities made it a popular choice for researchers chasing breakthroughs in radio astronomy and atmospheric science. It was used for projects from sniffing out gravitational waves in space to tracking down potentially habitable planets far from Earth.

Arecibo's legacy includes the detection of the first binary pulsar in 1974 — a discovery that bolstered a key idea in Einstein's general theory of relativity and that earned two physicists the 1993 Nobel Prize in physics.

The observatory has been an inspiration to many. For its neighbors in Puerto Rico and for people worldwide, it has been a literal link between the terrestrial and the extraterrestrial. And in movies and art, it has been depicted as both Earth's doorbell and its peephole into outer space.

Pierce Brosnan clambered around its ladders in the James Bond film GoldenEye. Jodie Foster marveled at its otherworldly promise in Contact. And in 1974, it was used to beam a "Hello" message into space. 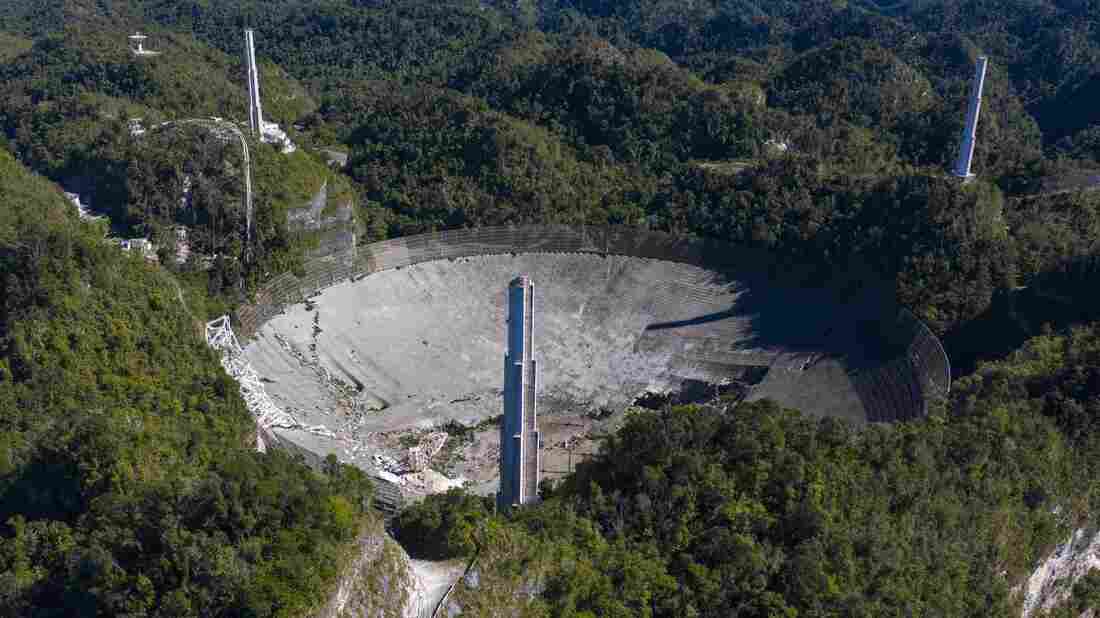 The Arecibo Observatory collapsed when its 900-ton receiver platform fell hundreds of feet, smashing through the radio dish below. Ricardo Arduengo/AFP via Getty Images hide caption 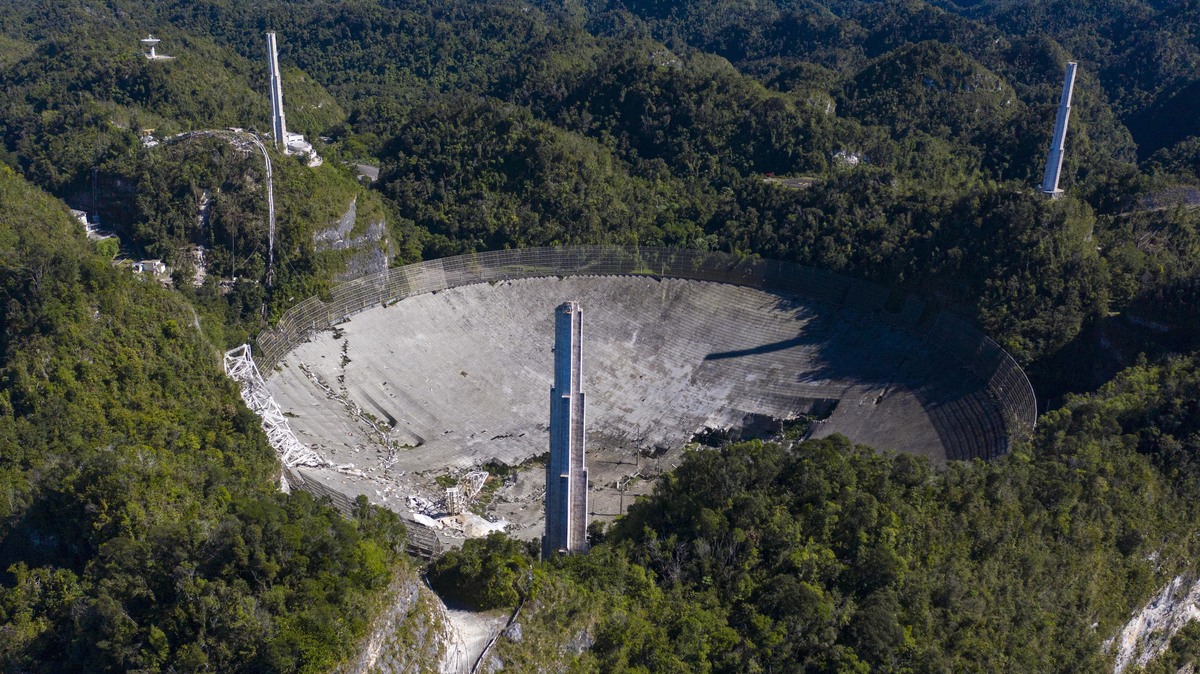 The Arecibo Observatory collapsed when its 900-ton receiver platform fell hundreds of feet, smashing through the radio dish below.

Researchers have been mourning the telescope's loss since the NSF announced its looming demise last month. Astronomer Seth Shostak of the SETI Institute compared it to learning your high school has burned down or to losing a big brother. Doing research at the facility was like going to a wonderful summer camp, he wrote in a recent farewell message to Arecibo.

"While life will continue, something powerful and profoundly wonderful is gone," Shostak said.

"One of the really neat things about the Arecibo Observatory is that it's a very versatile scientific instrument. Most telescopes, most radio telescopes, don't have the ability to send out light. They only capture light. At the observatory, we can send and capture light. When an asteroid's coming by, we are pretty much a flashlight that we turn on. We send radar out to it, and that radar comes back. ... We can tell you how far these objects are down to a few meters.

"And we care about where these asteroids are going to be because what if, one day, this thing comes around and gets too close to Earth? But if we can let people know this is going to happen next year, we can actually prepare for it. Like, the dinosaurs — they didn't have a space program, so they didn't get to prepare for anything."

The idea for the observatory was conceived in the late 1950s by Cornell University professor William E. Gordon, who was looking to build a huge tool to explore the Earth's atmosphere and the composition of nearby planets and moons.

The site in Puerto Rico was chosen "to take advantage of the vicinity to the equator and of the topography of the terrain, which provided a nearly spherical valley and minimized excavation," according to a lecture by longtime Cornell astronomy professor Martha Haynes.

The telescope underwent major upgrades in the 1970s and 1990s, allowing researchers to expand its role. Built with federal funds, Arecibo was managed for decades by Cornell before the University of Central Florida took up that role.

Arecibo and Puerto Rico have withstood natural calamities in recent years, including Hurricane Maria in 2017 and a series of earthquakes this year.