Accessibility links
'Be Kind': Young Kentucky Sisters Inspire With Kindness Campaign Raegan and Rylyn Richins make "Be Kind" yard signs and donate the proceeds to local charities. "We felt that every place could use more kindness because there's never too much kindness," Reagan says. 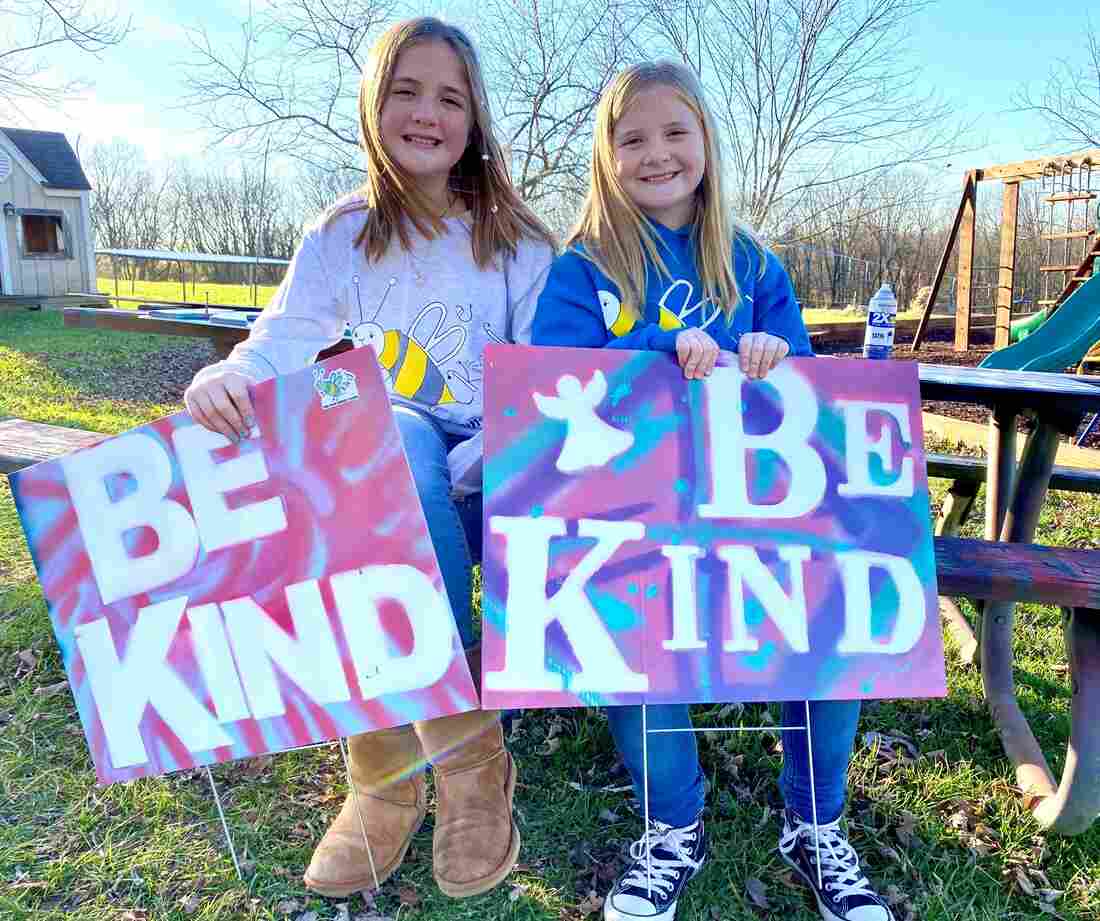 On a November afternoon sisters Raegan and Rylyn Richins sit at their picnic table in their backyard in a Kentucky county holding signs they just painted. Cheri Lawson /NPR hide caption 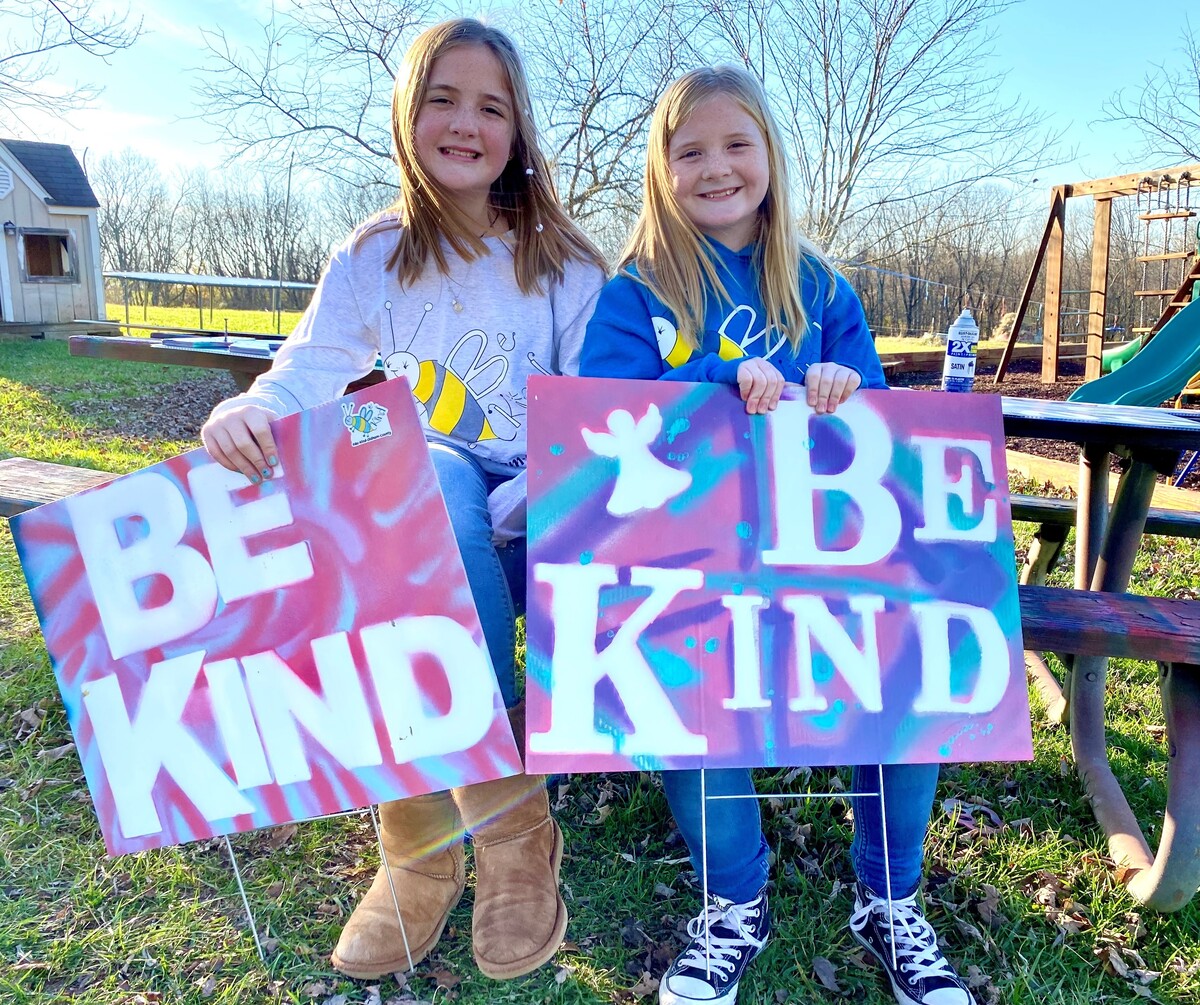 On a November afternoon sisters Raegan and Rylyn Richins sit at their picnic table in their backyard in a Kentucky county holding signs they just painted.

Even though it's been a difficult year with the coronavirus pandemic, a politically-divided country and social unrest, there is a bright spot in one Kentucky town.

Twelve-year-old Raegan and 9-year-old Rylyn Richins are sisters. They've been making and selling yard signs that say "Be Kind" since last year. The girls donate all of the proceeds to local charities. People all around their county started buying the signs and displaying them on their lawns, in front of their homes and businesses. LaGrange City Councilwoman Andrea Essenpreis was so inspired by the display of signs she asked the city council last year to proclaim the City of LaGrange, "Kentucky's Kindness Capital." Essenpreis says after Raegan and Rylyn spoke to the council there was a unanimous vote, and the mayor signed an official proclamation.

The councilwoman and bakery owner says every time she sees a sign in a yard, she thinks about the people who live in that house and how they're choosing kindness in just the simple way of putting a sign in their yard, saying, "These are our values and this is what we stand for."

This September the city of LaGrange, Kentucky unveiled a permanent, large sign welcoming visitors. It's one of the first things you see driving into the town. The sign with pink, green, and white letters reads, "Welcome to LaGrange, Kindness Capital of Kentucky."

When the Richins sisters started painting and selling signs they had no idea what kind of an impact they would have.

Rylyn says she and her sister just wanted to make a difference in their community. She says they got the idea last year when they saw a sign in LaRue County, Kentucky with the words, "Just be kind." Rylyn says while driving home from a trip, the family was hungry and cold.

"And we were not in the best mood and then I see the sign and it's fun with lots of pretty colors. That just made us so happy. We just wanted to start doing it here" Rylyn says.

'A project of love'

She says the girls asked their mom if they could make yard signs for people that read, "Be Kind."

Mom, Rhonda, says she and her husband, Ryan found wooden letters at a local store. They purchased canvas and corrugated boards and picked out cans of spray paint (the girls' favorite colors) to get the girls started. She says they had no idea what they were doing. Rhonda says when the weather permits, the girls are usually outside making signs a couple days a week. It only takes a few minutes to complete several signs. The girls put the six letters on corrugated board and spray their favorite colors. When they lift the wooden letters the words "Be Kind" are visible. They also decorate with designs like unicorns, stars, and paw prints.

In the past year, the girls have painted close to 3,000 signs. Sometimes neighbors and friends like to come over to help out.

The girls paint at a picnic table in their backyard. They decorate the unique signs while mom, Rhonda, cheers them on. "Each are [sic] made with different colors, different designs, different fonts, different embellishments," Rhonda says. "They wanted each one-of-a-kind because they feel you can be kind in many different ways."

Even though The Richins family has five kids, three with special needs, mom, Rhonda, says she had no hesitation supporting the girls but admits she had no idea how big the project would get. They now have a website and Facebook page. "This is a project of love and people are kind to us because we don't profit from this. None of the money goes in our pockets, it goes back to the community," Rhonda says. 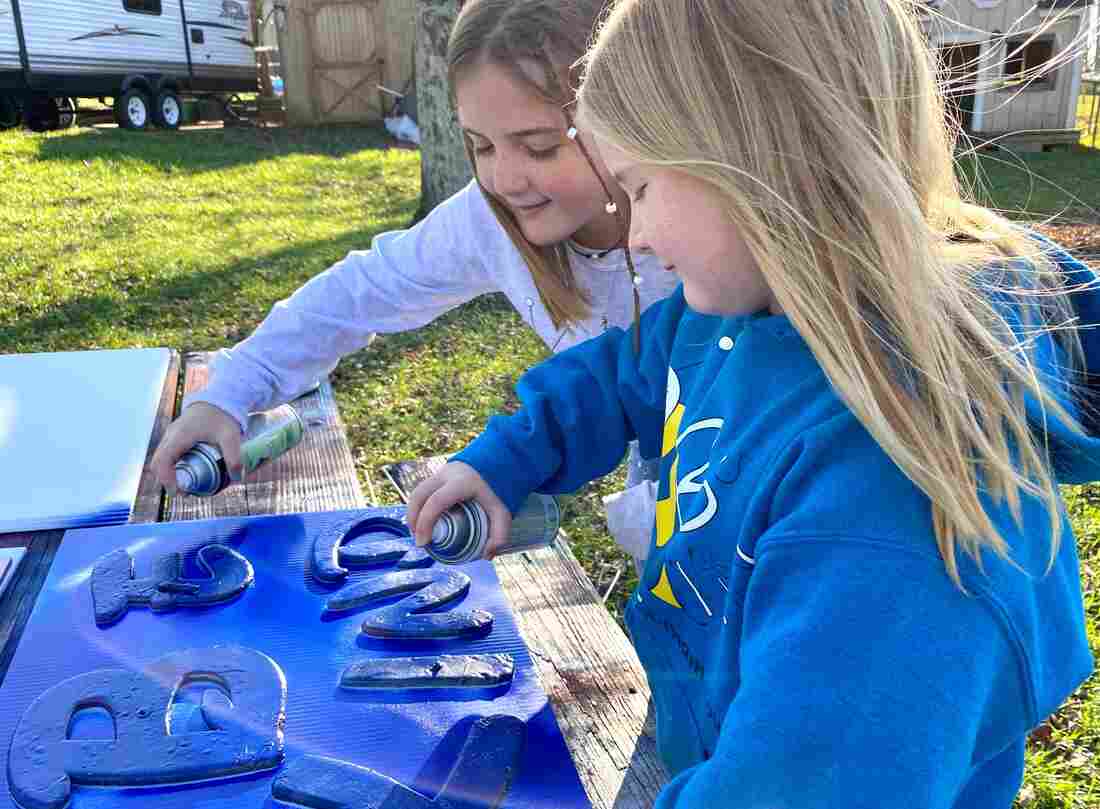 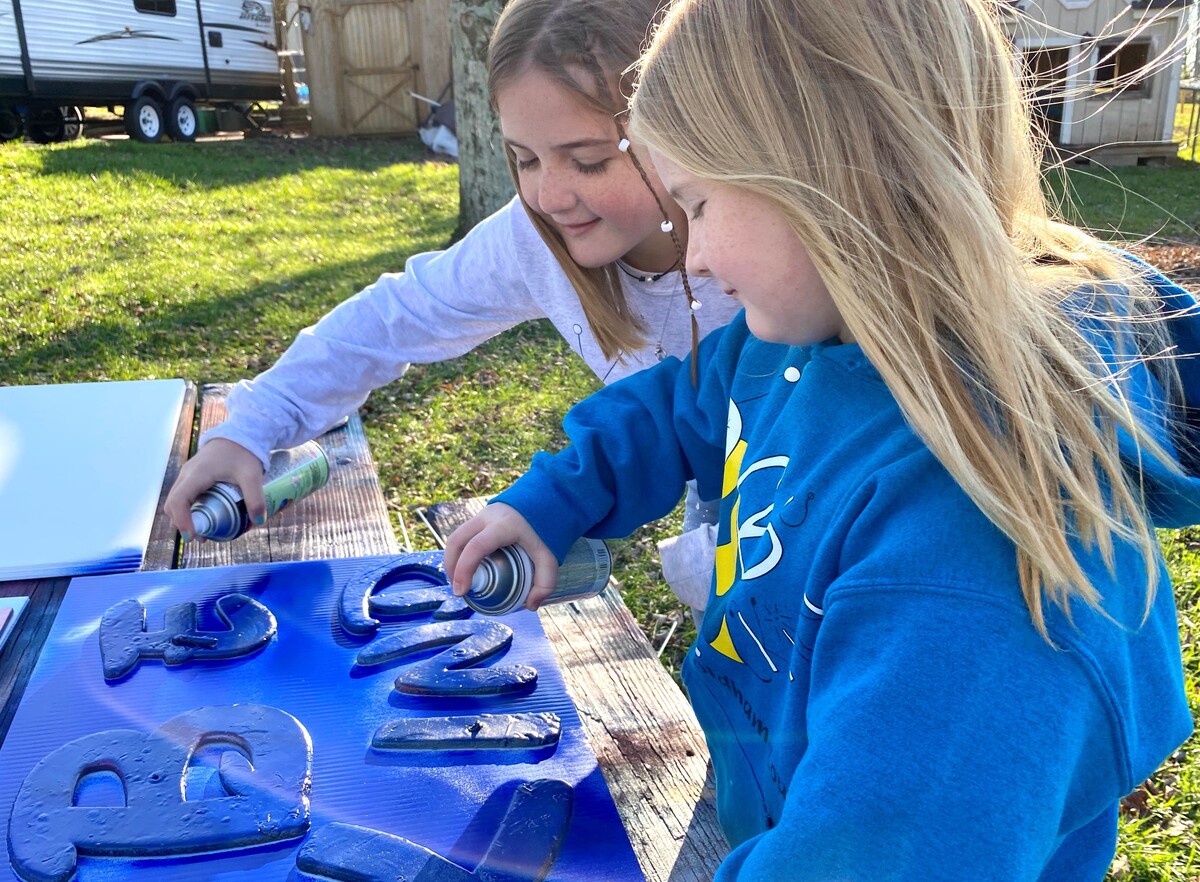 Sisters, Raegan and Rylyn Richins look closely at one of their newly painted "Be Kind" signs.

'There's never too much kindness'

Seven local charities like Pillar, Blessings In A Back Pack, Humane Society of Oldham County, Hope Health Clinic, Guns 'N Hoses, High Point and American Red Cross of Oldham County benefit from the "Be Kind" campaign. The girls charge $10 for each sign. The donor decides which one of the charities gets the money.

Raegan says Pillar is an organization that provides support to people with disabilities. The sisters chose Pillar as one of the charities to receive the donations because three of their siblings have what they call "distinct abilities" or special needs.

Raegan says they started making the signs so their county could become closer and spread kindness.

"We felt that every place could use more kindness because there's never too much kindness" she says.

The signs, placed in yards and businesses in the Kentucky county have had a ripple effect.

Raegan says people have been sharing their "Be Kind" signs in other states.

"Someone reached out to us the other day and they said, 'Oh my goodness, I'm so glad I found your account, I saw one of your signs in California,' " Raegan says.

She says they've heard from other states where people also want to make signs for their communities. "When kindness goes to other states it just makes us happy, when people say, can we make signs here? Because we want kindness to spread," she says.

To Raegan and Rylyn being kind means simple gestures like holding the door open for someone or smiling at someone. The girls say their signs remind people to "Be Kind" when they see the words.

Rylyn thinks the "Be Kind" campaign is catching on for this reason, "People know that if they just do a small thing that could probably change someone's life."

She says she's seen a change in the community since the campaign started. She recalls recently seeing an out-of-work performer in the grocery store parking lot playing his electric violin. He was asking for tips for his rent and his two kids. Essenpreis says she and at least seven other people made a point to tip the violinist.

"The whole mood of that parking lot was changed by his music. It was like a little piece of magic right in the middle of our day. I feel like that happens in LaGrange now and it didn't used to," Essenpreis says.

The mayor of LaGrange, John Black, says people across the country have reached out to ask about the campaign — especially during these divisive times. Mayor Black says most people calling want to know how they can get the "Be Kind" signs.

"Just a couple little girls had an idea and a special place in their heart to try to create this kindness effort throughout our city and our county and it's somewhat taken hold more so than just here," Black says.

Mom, Rhonda, says the family is only able to get signs to people in their community. They don't mail the signs out of state. Although she says community members have carried the signs to other states and even to China and Australia. She says, "These are not professionally made. These are made by kids with their hearts into it. And by mailing one or two signs across the country that might hit one or two people but if a community gets involved we can impact more people. That's what the girls want. That's their ultimate goal," Rhonda says.

The family has heard from a Rotary Club in Pennsylvania, a Scout troop in Michigan and a family in California. Mom, Rhonda says they all wanted to know how they could do what Raegan and Rylyn are doing. Rhonda says the girls' ultimate goal is to encourage other people in their communities to start campaigns.

She says they've received more than 3, 000 emails and calls about the "Be Kind" campaign — one that the family hopes will spark a wave of kindness across the country.