Accessibility links
On Twitter And TikTok, Biden Grandchildren May Offer Viral View Of White House Life Presidential children and grandchildren are often shielded from the public eye, but that's changing. Joe Biden's grandchildren and Kamala Harris' stepchildren have their own personas on social media. 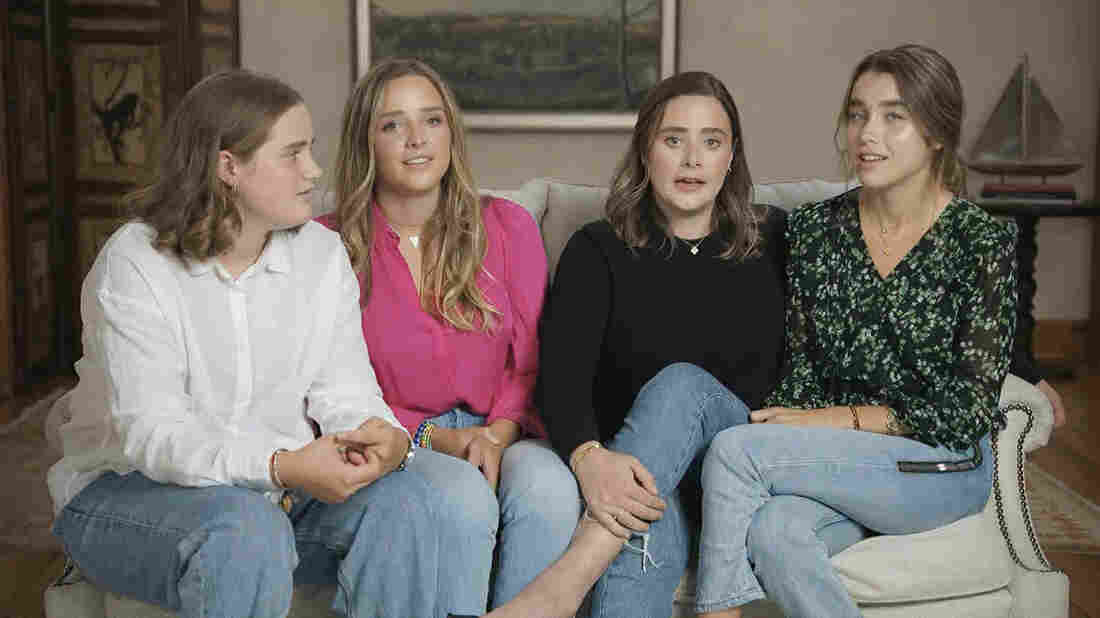 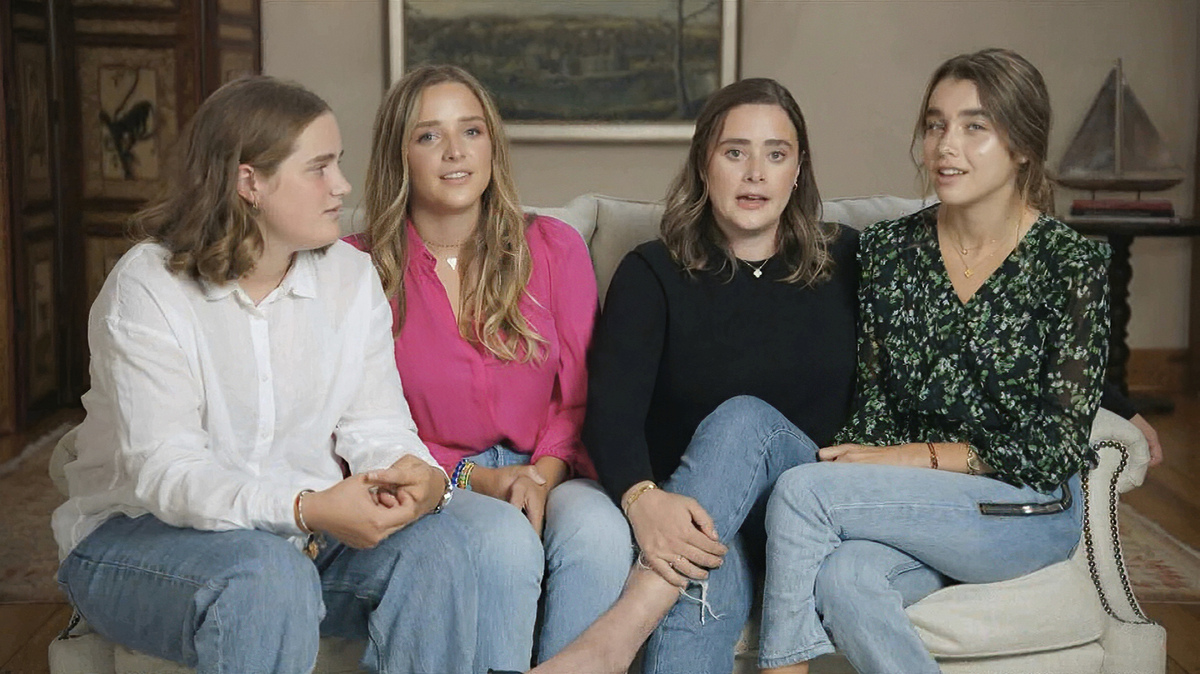 Grandchildren of President-elect Joe Biden speak during the fourth night of the Democratic National Convention on Aug. 20.

In the days of counting that followed election night, there was plenty of stress in the Biden and Harris families. And the whole world could follow along.

The eldest granddaughter of President-elect Joe Biden, Naomi Biden, joked to her 188,000 Twitter followers that she couldn't stop watching cable news and that she'd "kill to be one of those people who 'can't eat when they're stressed' right about now."

I’d kill to be one of those people who “can’t eat when they’re stressed” right about now.

In the Harris-Emhoff household, a TikTok of Ella Emhoff, the 21-year-old stepdaughter of Vice President-elect Kamala Harris, was gaining millions of likes. Taken by Harris' niece, Meena, it showed Emhoff trying her first McDonald's Filet-O-Fish while watching election returns.

And when the race was called for Biden on Nov. 7, his granddaughters Naomi and Maisy let the world see what it was like as their family finally tasted victory.

While the lives of presidential children and grandchildren have historically been kept mostly private, Biden's four granddaughters — Naomi, Finnegan, Maisy and Natalie Biden — as well as Harris' stepchildren, Ella and Cole Emhoff, have formed their own public personas.

Ranging in age from their late teens to mid-20s, they use Twitter, Instagram and TikTok. They did campaign videos and events, took part in magazine interviews and talked with YouTube personalities, comedians and celebrities.

Over the past year, her voice has particularly gotten louder over social media. From tweeting supportive messages about her "pop" to sharing Biden-themed memes, the 26-year-old's posts have racked up tens of thousands of likes and provided another personal side to the Biden family.

Maisy Biden, who is in her late teens, also has been fairly active on her public TikTok account. The third-eldest grandchild of the president-elect often posts comedic videos that are less overtly political but have featured cameos from her family, including her father, Hunter Biden.

"In campaigns, operatives used to say, 'Is the candidate somebody you could see sitting at your kitchen table and having a meal with?' " said Lisa Caputo, the press secretary to Hillary Clinton when she was first lady. "I think the Biden grandchildren's social media presence, led by Naomi, does just that."

"He's relatable to begin with," Caputo added. "But to hear it through the voice and through the eyes of his granddaughter and his other grandchildren I think just puts a whole other lens of relatability onto him."

Presidential historians say that the increased use of social media over the past decade has amplified the voices of the first and second families.

"The first children have been mentioned in the past, but they didn't really have the opportunity to broadcast their own opinions in the same way. And so now social media gives the Biden family an opportunity to do that," said historian Tevi Troy, who has studied presidential usage of popular culture.

Troy says that while Twitter was around during the Obama administration, the 44th president's children were too young and social media was less accessible.

"The time seems to be right to have a president who has a bunch of family members who are active on social media, and social media is not a weird or elite thing," Troy added. "It's a kind of common thing today."

Presidential families have played public roles before. Historian and journalist Kate Brower pointed to the support President Richard Nixon received from his daughter Julie during the Watergate scandal and the young adult children of President Jimmy Carter campaigning for him, but Brower added that the Biden and Emhoff young adults stand out because of their ability to form their own public identities.

"I think that this is really a first, where we're seeing this kind of individualism and the support of the family," she said.

Brower said she was particularly struck by Ella Emhoff's presence on Instagram. Emhoff is an art student at the Parsons School of Design, often posting photos of her visual art and clothing she has made.

Emhoff recently raffled off some of her clothing over Instagram, and the proceeds went to an organization supporting Black transgender people.

"She's capturing that individualism," Brower explained, "and I think there's been this sense of uniformity for the past four years in Washington with Ivanka and the Trump kids looking a certain way and being a certain way. And now you have this blended family representing different cultures."

Nearly two years ago, when Biden was deciding whether to run for president again, he spoke about the importance of his family, a factor that prevented him from running four years earlier after his eldest son, Beau Biden, died of brain cancer.

But his granddaughters explained in a video for the Democratic National Convention how they had all encouraged their grandfather to run for president this time around.

"He thought we were calling a meeting sort of to like discuss, you know, whether or not we wanted him to [run,]" Naomi said, sitting on a white couch squished between Maisy, Finnegan and Natalie. "But really we were calling it to be like, 'Get in that race. Hurry up.' "

That said, Biden's run for president has put an added spotlight on his younger son, Hunter Biden, who was repeatedly criticized by Republicans throughout the campaign over his foreign business dealings.

In September, Senate Republicans released a report that characterized his work as "problematic." The report largely had no repercussions, much like previous information on the topic. In response, the Biden campaign put out a statement and fact sheet.

"Though the whole world knows his name, no one knows who he is," she wrote. "Here's a thread on my dad, Hunter Biden - free of charge to the taxpayers and free of the corrosive influence of power-at-all-costs politics. The truth of a man filled with love, integrity, and human struggles."

Though the whole world knows his name, no one knows who he is.

Here's a thread on my dad, Hunter Biden - free of charge to the taxpayers and free of the corrosive influence of power-at-all-costs politics. The truth of a man filled with love, integrity, and human struggles: pic.twitter.com/GGeOexmtTV

In a series of tweets, Naomi cast her father in an emotional and intimate light, detailing his struggle to get into Yale Law School and his commitment to his older brother, Beau, when Beau got sick.

"The pain [Hunter] has endured would be enough to make a lesser man give up on life all together. But despite the best efforts of [a] cruel few to destroy a private man, he is sober, happy, and as at peace as ever today because as long [as] his family needs him, he has not lost his purpose," she wrote.

Tens of thousands of people retweeted Naomi's thread, with the first post alone getting 55,700 likes and over 17,000 retweets.

"I think it really did cut through a lot of the noise, to see and to read this heartfelt testament to her father," said Caputo. "I found that to be incredibly effective, incredibly thoughtful and incredibly loving."

As Inauguration Day approaches, it remains unclear if some of the young adult members of the incoming first and second families will continue to be so public.

As far as presidential history goes, Brower explained that some younger members of past first families have taken a step back after their family's campaign ends.

"They tend to disappear," she said. "I'm curious to see if the Biden grandchildren in particular really take this public-facing role once he's in office," Brower added.