Accessibility links
NPR's 100 Best Songs Of 2020, Ranked The great songs of 2020 were as abundant as the rest of the year was a drag. Think of these 100 jams as a silver linings playlist for the worst year of our collective lives. 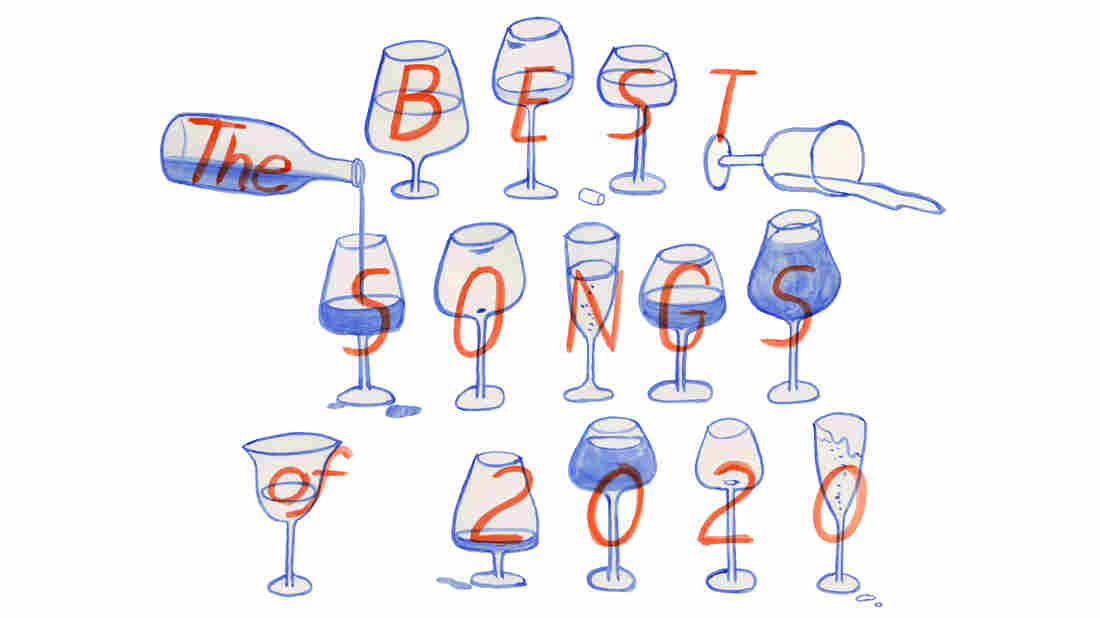 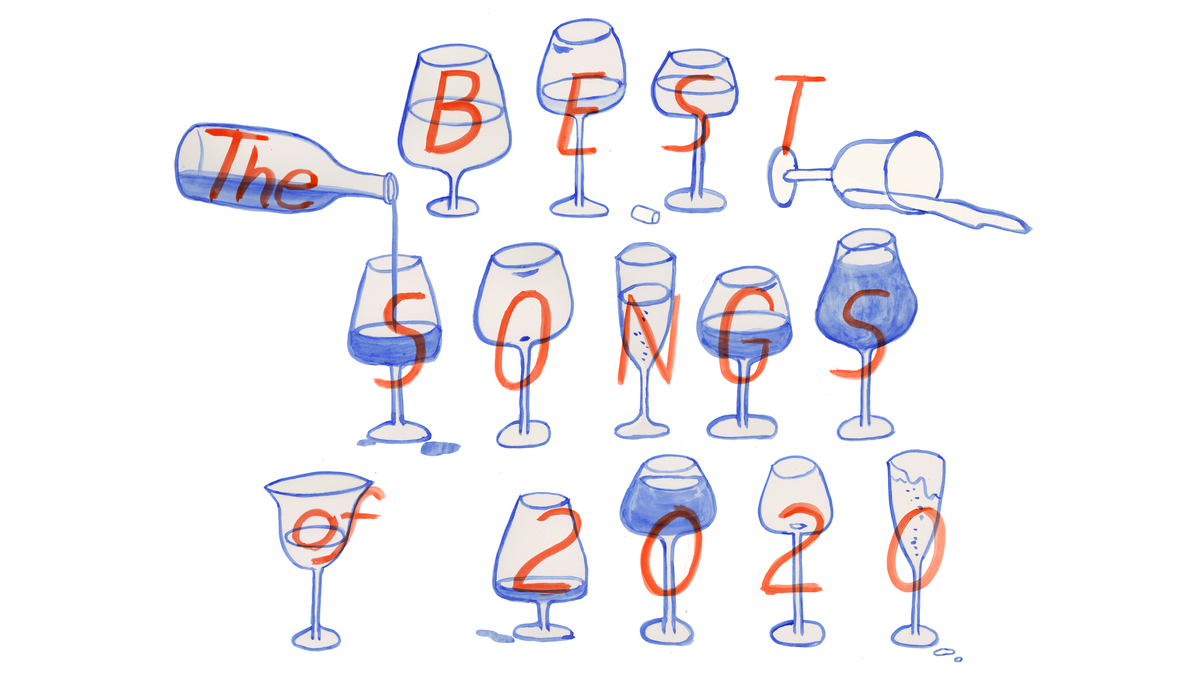 Welcome to a whopper of a mixtape. If you've been living under the rock 2020 dropped on all of us back in March and spent the last nine months finding comfort in the sounds of your childhood (hell, even 2019), we have some good news for you: As crappy as this year has been for anyone with a shred of empathy, the jams were ample. When the news cycle had us at a loss for words, we found quiet songs to speak for us. When we wanted to smile without looking at our phones, buoyant distractions abounded. If racism, xenophobia and sociopathic behavior made us want to scream, Black musicians found astonishingly inventive ways of saying "um, did you just start paying attention?" And since we're still stuck in this storm for the foreseeable future, we present to you a silver linings playlist: 100 songs that gave us life when we needed it most. (Find our 50 Best Albums list here.)

For its first-ever all-English-language song, BTS got outside songwriters to craft a relentless, chart-topping, "Uptown Funk"-style banger. The lyrics forgo the K-pop juggernaut's notes of hopeful reflection in favor of hashtag-ready exclamations of joy, as well as truly sublime couplets like "Shoes on, get up in the morn / Cup of milk, let's rock and roll." Damned if it doesn't work wonders. Cup of milk, let's rock and roll! —Stephen Thompson

Kentucky's country music desperado sounds completely at home singing with Nashville's A-Team of bluegrass musicians on Cuttin' Grass, his first string band album. The album reinterprets 20 songs from his catalog, including this short, sardonic number from the trippy 2014 album Metamodern Sounds In Country Music. "Living The Dream" is more paradoxical and cryptic than most bluegrass, but it works; one minute he's an ambitious go-getter, the next he prays his job inquiries don't call back. He's living lean, but living large, with a banjo keeping time. —Craig Havighurst (WMOT)

Ariana Grande's "pov" comes off as a fluttering, ethereal ode to newfound love, but it's really a meditation on how she uses romance as a lens to better get to know herself. While "thank u, next" looked back at life lessons from past relationships, on "pov" Grande wishes she could see herself from her boyfriend's perspective. The lyrics shed light on part of the journey to self-confidence: needing someone else's gaze in order to appreciate the strengths you've had all along. —Nastia Voynovskaya (KQED)

"Look Over Your Shoulder"

It might be safe to say that Busta Rhymes was right: Since his 1996 debut, The Coming, and consistently thereafter, he's warned us of cataclysmic events. After an eight-year hiatus, the golden era titan felt (correctly) that the time to return was now. The third single from Extinction Level Event 2: The Wrath of God features the sole appearance from Kendrick Lamar this year and, despite the grim theme of the project, frequent collaborator Nottz provides one of most uplifting beats I've ever heard. —Bobby Carter

Chicano Batman's Invisible People is the soundtrack to the funk-rock house-party none of us got to throw in 2020. Its opening song, "Color My Life," is the album's inviting, mildly psychedelic welcome mat. Almost immediately, bassist Eduardo Arenas settles into a groove so deep it's almost a tunnel. Thankfully, Bardo Martinez's wandering voice leads the way out through lyrics filled with lucid dreams, shining lights and a whole lot of feels, while adding off-kilter synth riffs that you'll find yourself humming for days. —Jerad Walker (Oregon Public Broadcasting's opbmusic.org)

You can often gauge the success of a song by how many remixes roll out. As of this writing, Nigerian superstar Tiwa Savage's 2020 hit "Dangerous Love" has five official reinterpretations. Our favorite of the bunch ups the Afrobeat element (and tempo) thanks to frequent Wizkid collaborator DJ Tunez and ally D3an. Now if it was only twice as long... —Otis Hart

No one has done more with the lessons of "Old Town Road" than the rapper, singer and songwriter Breland. There's a knowing wink to his flaunting of the status symbols of truck culture in "My Truck" that hearkens back to the mischief of Lil Nas X, but Breland whipped up his hit using sonic elements and cultural signifiers clearly sourced from both country and trap. What he really shows off by skating from an earthy, stair-stepping melody to falsetto licks and fleet R&B runs with such cheerful ease is a stylistic dexterity, and strategy, for working across genre boundaries. (He did invite Sam Hunt, the country-pop superstar most fluent in R&B-style suaveness, onto the remix, after all.) —Jewly Hight (WNXP 91.ONE)

Leon Bridges was planning on releasing "Sweeter," his collaboration with multi-instrumentalist Terrace Martin, next year. Instead, it came out days after the killing of George Floyd. He confessed to his fans that this was the first time he wept for a man he never met and requested they listen to the song from the perspective of a black man taking his last breath, as his life is being taken from him. Backed by Martin on saxophone, Bridges sings: "Hoping for a life more sweeter / Instead I'm just a story repeating / Why do I fear with skin dark as night / Can't feel peace with those judging eyes." A reckoning on racism, the beauty in the emotion belies the pain of this soulful song. —Alisha Sweeney (Colorado Public Radio's Indie 102.3)

"Cool For A Second"

Give the New Zealand dream-pop band Yumi Zouma just over three minutes of your time, and it'll transport you on a spring breeze. Sure, it's taking you to a place of boundless flustered melancholy, but when life lets you travel via spring breeze, you'd best just jump at the chance. —Stephen Thompson

Often, explosive anger doesn't hold the same transformative potential as a seething, slow burn. The opening track on the Paramore singer's first solo album luxuriates in this type of anger; indeed, its first word is a surefooted "rage" that follows a satisfied exhale. Slinky and contained and just — as the title suggests — on the verge of boiling over, the song catalyzes low-temperature trauma into a tribute for hard-won self-respect. —Marissa Lorusso

You can't stop Matty Healy, and he can't stop himself, either. It's cool — at this point in the life of The 1975, the definitive pop band of the moment going on half a decade, he's more or less permalancing as the bard of the idly, overly online, paralyzed by a hyper-awareness of privilege, every little movement mediated by a screen and oooh, the damage done. As long as he and his friendsters keep writing melodies like this one and stringing them up on what sound like improved versions of lost pre-grunge synth hits, why would you want him to? —Jacob Ganz

Jerry Williams Jr. has locomoted from blues to funk-psychedelia to Bon Iver-assisted Auto-Tune in his 65-year career, but his Virginia wail has always touched country music's sad soul – never better than on this weeper, sung by a widower at a family matriarch's grave. —Ann Powers

Recorded in an enormous steel water tank dating from 1940, this opening piece, from a four-movement suite, takes great advantage of that spectacularly reverberant space. The music, by Michael Harrison, unfolds in blurry, swirling, echoing layers that produce massive "halos" of glowing sound. Let the music wash in and out, and you can hear what might have happened if Giovanni Palestrina was a fan of Tuvan throat singing. —Tom Huizenga

Here is a loveman worthy of a real swoon. The 25-year-old Giveon shows off a baritone made for bedroom speakers in this subtle takedown of an ex that, cold as the lyrics can get, still oozes seductive charm. —Ann Powers

The internet influences everything we touch, and music is no exception. In true 2020 fashion, Moneybagg Yo leaned right into the meme-o-verse with the provocative single "Said Sum." Inspired by a flippant social media phrase that gained popularity early this year, the Memphis rapper borrowed the concept and flipped it into a Top 20 Billboard song. "Said Sum" is Moneybagg Yo doing what he does best: taunting his foes relentlessly and sounding remarkably charismatic while doing so. —Kiana Fitzgerald

The titular track on Rita Indiana's first album in 10 years, "Mandinga Times" is a countdown to the end. Indiana occupies the character of the song's primary observer and storyteller, Mandinga, who reports political corruption, state violence and climate crisis as harbingers of global apocalypse. This cataclysm rains over a frenzied alí-babá beat with droning metal guitars and horror inflections, as Dominican dembow artist Kiko El Crazy repeats the axiom "no te dejes" in a verse of survival. Scorning the violence that defines the present, Mandinga welcomes, within the apocalypse of one world, the opportunity (and obligation) to build a better one. —Stefanie Fernández

Ashnikko screams over distorted, whining guitars. Grimes whispers about the winter of her discontent in her signature, barely perceptible voice across an infectiously tinny drum loop. The strength of "Cry" is in the duality. Presented by this emerging TikTok sensation, the track – campy hyperpop inspired by nu-metal acts like Evanescence – is expansive and vulnerable, oscillating between vicious, throat-punching shrieks and delicate, honeyed breaths. Ashnikko's question: "Bitch! Are you tryna make me cry?" Once posed, there's no need for an answer. —LaTesha Harris

They couldn't sound less alike, but the best reference point for a song like "Tin King" just might be R.E.M.'s "It's the End of the World as We Know It (And I Feel Fine)": strands of cut-out poetry that sometimes form a complete thought and sometimes do not, strung across just a handful of notes and tied to a freight-train vamp that feels like it could chug along forever. Singer Laura Bettinson sinks deep into the production, gradually allowing her voice to become just another synth texture for Joey Waronker's jittery drumming to vibrate against, until the din of half-heard words begins to make its own strange sense. —Daoud Tyler-Ameen

"Hunger For A Way Out"

When I most missed dancing at basement shows this year, drunk on rock and roll ecstasy and maybe a few beers, I'd listen to "Hunger for a Way Out," a two-minute jolt of ramshackle post-punk dreaming, recorded around a single mic in a vacant concrete lab. Everything's blown out and blissful, especially Lira Mondal's infectious yelps and yowls, pushing your hips into the red. —Lars Gotrich

Wrecked dreams and displacement from middle America have been common themes in roots music for some years now, but the story resonates anew in the voice of Cincinnati songwriter Arlo McKinley. On the swaying, and country, title track of Die Midwestern, the unease is heartbreak, and the dilemma is a classic stay-or-go choice of someone who loves his home more than, perhaps, it loves him. —Craig Havighurst (WMOT)