Accessibility links
In His Final Weeks, Trump Could Dole Out Many Pardons To Friends, Allies The president could shield his allies from some prosecution. Critics say Trump is trying to help cronies — and maybe himself — escape accountability. 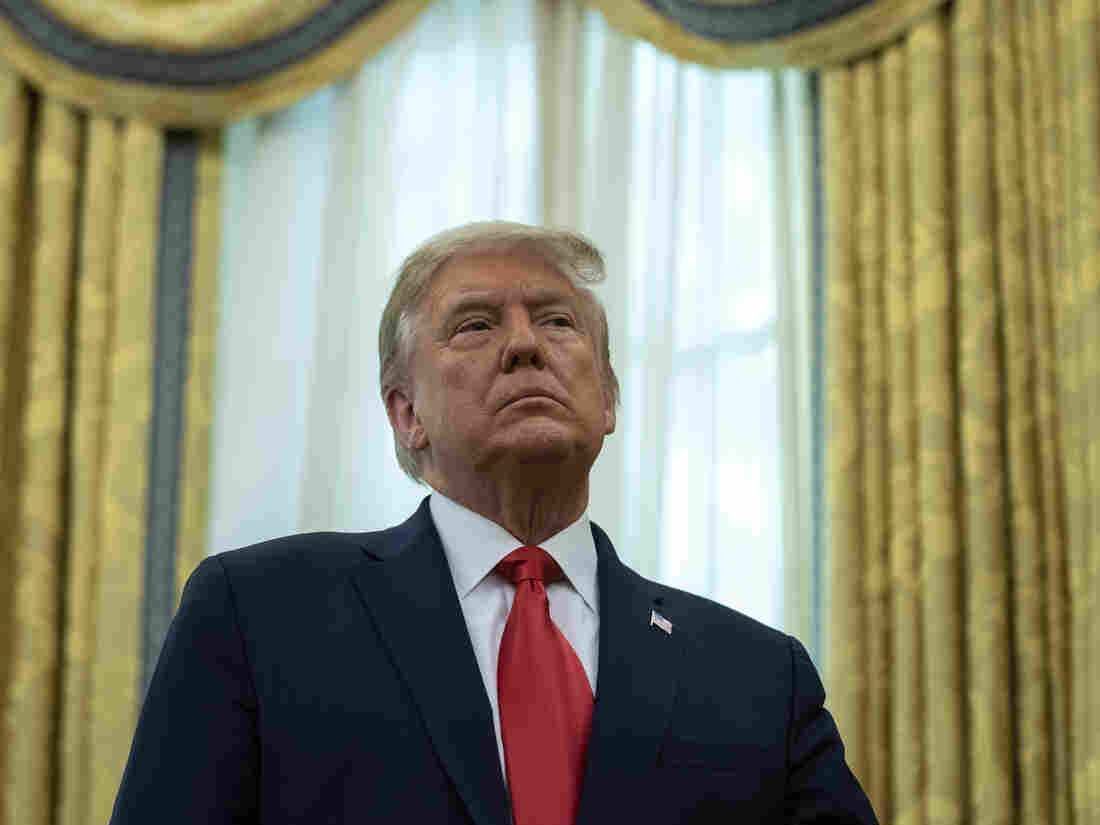 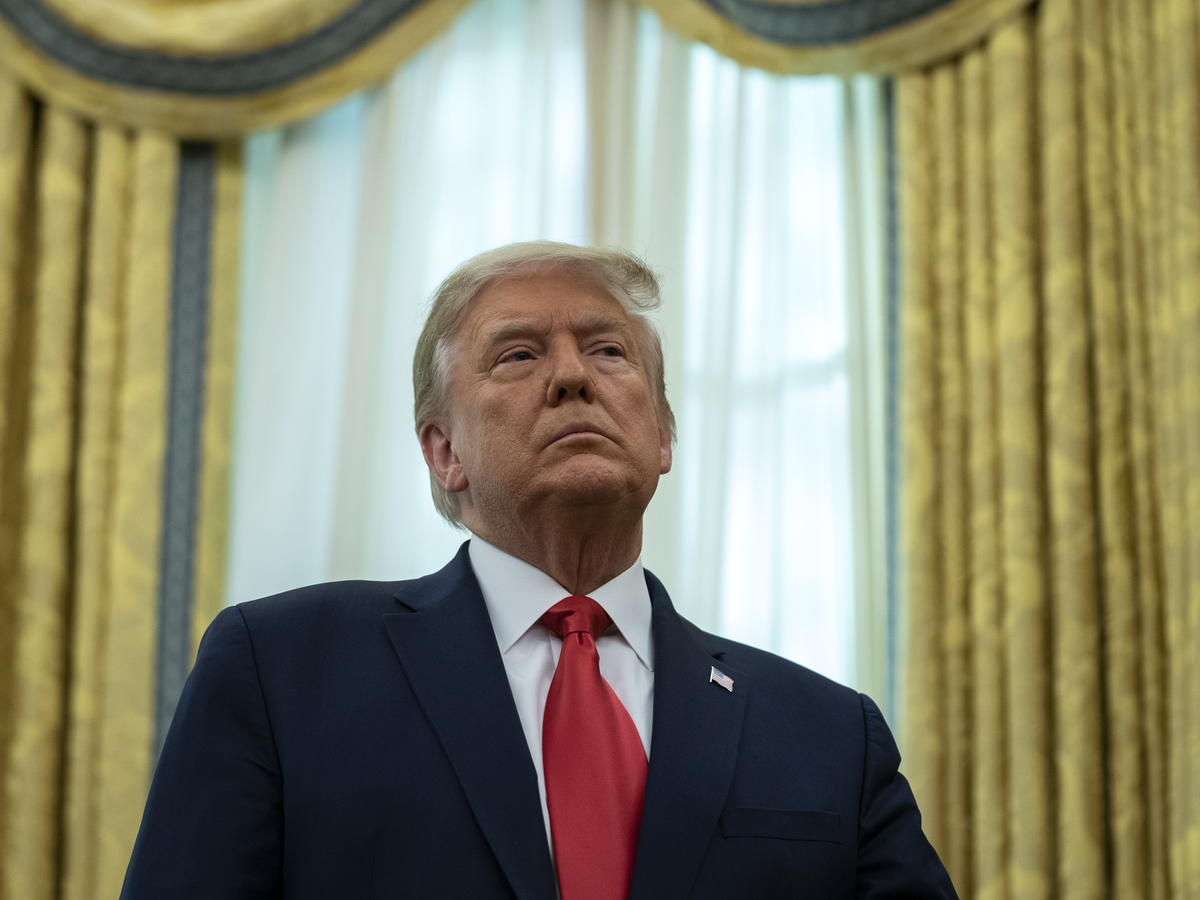 President Trump listens during a ceremony Thursday to present the Presidential Medal of Freedom to former college football coach Lou Holtz in the Oval Office.

On more than one occasion, President Trump has demonstrated his willingness to use his pardon power to pluck a political ally or associate out of legal trouble.

In July, he commuted the sentence of his longtime friend and informal adviser Roger Stone, who was convicted of lying to Congress. Last week, he pardoned his first national security adviser, Michael Flynn, who pleaded guilty to lying to the FBI about his contacts with the Russian ambassador.

That has set the stage for a possible run on pardons in the closing weeks of the Trump administration. The list of Trump associates who are facing or could face federal charges is long.

It is not unusual for a president to issue pardons in the waning days of an administration. Historically, at least some of those decisions have been controversial.

President George H.W. Bush pardoned people ensnared in the Iran-Contra scandal on Christmas Eve 1992, not long before he was set to leave office. That move was supported by once and future Attorney General William Barr.

Then, on his last day in office, President Bill Clinton pardoned the fugitive financier Marc Rich. The move immediately sparked questions, particularly since Rich's former wife, Denise Rich, had made a large donation to the Democratic Party and the Clinton Library.

Federal investigators looked into the matter, but ultimately no charges were brought.

Trump largely stands apart from his predecessors, however, in his willingness to grant pardons to political allies and people he knows.

Those all generated headlines and a degree of controversy, but nothing like Trump's decision to grant clemency to Stone and Flynn, two friends and advisers whose legal troubles tied back to the president himself.

Stone and Flynn were charged as part of special counsel Robert Mueller's investigation into possible ties between the Trump campaign and Russia.

Trump has long railed against the probe, calling it a "hoax" and a "witch hunt," which has fueled speculation he could pardon others who were caught up in the investigation.

The pardons tied to Mueller probe

The first person on that list would likely be Paul Manafort, Trump's onetime campaign chairman. A jury convicted Manafort of tax and bank fraud, and he later pleaded guilty to two conspiracy counts in a separate but related case also brought by Mueller's team.

As part of his plea deal, Manafort agreed to cooperate, but the special counsel's team said he repeatedly lied to them.

Trump has already publicly mulled pardoning Manafort, although he has not taken action. An attorney for Manafort, Todd Blanche, declined to comment on questions about a possible pardon.

Manafort's former deputy, Rick Gates, also was convicted as part of the Russia probe. Gates said neither he nor his lawyers have been in touch with the White House about a pardon, but he said he'd happily accept one.

Barr: DOJ Has No Evidence Of Fraud Affecting 2020 Election Outcome

"I absolutely believe the pardons would be warranted," Gates told NPR. "It's the president's decision, ultimately, but I'm hopeful and would certainly be grateful if he were to issue one. And nobody knows better than him the suffering that we all kind of went through as a result of that investigation."

Gates was charged alongside Manafort but ultimately pleaded guilty and became a key witness for investigators. He said he doesn't think his cooperation with Mueller should rule him out from Trump's consideration.

"I don't believe that the idea of my cooperation would hinder any opportunity for a pardon," Gates said. "And I hope that anybody that is reviewing it does certainly understand that this was not a cooperation in the sense that it, quote, flipped on anyone."

Another person caught up in the Russia probe was George Papadopoulos, a young foreign policy adviser to the 2016 campaign who pleaded guilty to lying to the FBI. He served a brief prison term.

Critics — including one of the attorneys who took part in the Russia investigation, Andrew Weissmann — say that what they call Trump's abuse of his pardon power has kept authorities from finding out all they can about what took place. With the incentive to hold out because of the prospect of clemency from Trump, witnesses such as Manafort also had an incentive not to tell all they know, Weissmann said.

The list of Trump associates potentially angling for a pardon does not end there.

Steve Bannon, who helped run Trump's 2016 campaign and then became his chief strategist at the White House, is under federal indictment in New York. He and three other men are accused of defrauding people who donated to an online campaign to raise money for a southern border wall. Bannon has pleaded not guilty.

Trump has tried to distance himself from the fundraising campaign, but he also could pardon the other men involved in the case, who aren't as close to Trump but who support the politics of the border wall.

Giuliani, the president's personal attorney and the man spearheading Trump's baseless claims of widespread election fraud, was also under the scrutiny of federal prosecutors in New York.

Talk Of 'Preemptive' Pardons By Trump Raises Questions: What Can He Do?

Giuliani denies he's done anything wrong, and the current status of the federal investigation is unclear. But investigators were looking at Giuliani's business dealings and his activities in Ukraine, according to an individual familiar with the matter.

The New York Times has reported that Giuliani has discussed a possible pardon for himself with the president. Giuliani told NPR in a text message the report was "completely false."

The family and the president

There's also the possibility that Trump could preemptively pardon members of his family or even himself.

Neither Trump nor his children have been charged with a federal crime, but they have faced scrutiny.

The president's pardon power is broad, and it is rooted in the Constitution. The president can issue a preemptive pardon.

On its website, the Justice Department's Office of the Pardon Attorney says that "it would be highly unusual, but there have been a few cases where people who had not been charged with a crime were pardoned."

The classic example is President Gerald Ford's pardoning of Richard Nixon, who had resigned from office but had not been charged with any crimes.

As specialist attorneys told NPR's Brian Naylor, what Trump could do is pardon his children or others for activities that took place during a certain span of time, even if authorities didn't learn until later that potential crimes had been committed.

The issue of a president pardoning himself is trickier. Trump has claimed he has the power to do so, but no president has ever tried that, and experts say it's an unsettled legal question.