Accessibility links
Supreme Court Rejects Ruling But Francis Collins Urges Churches To Stay Closed His comments came even as the U.S. Supreme Court on Thursday ordered a federal district court to reexamine its previous support for restrictions on indoor religious services in California. 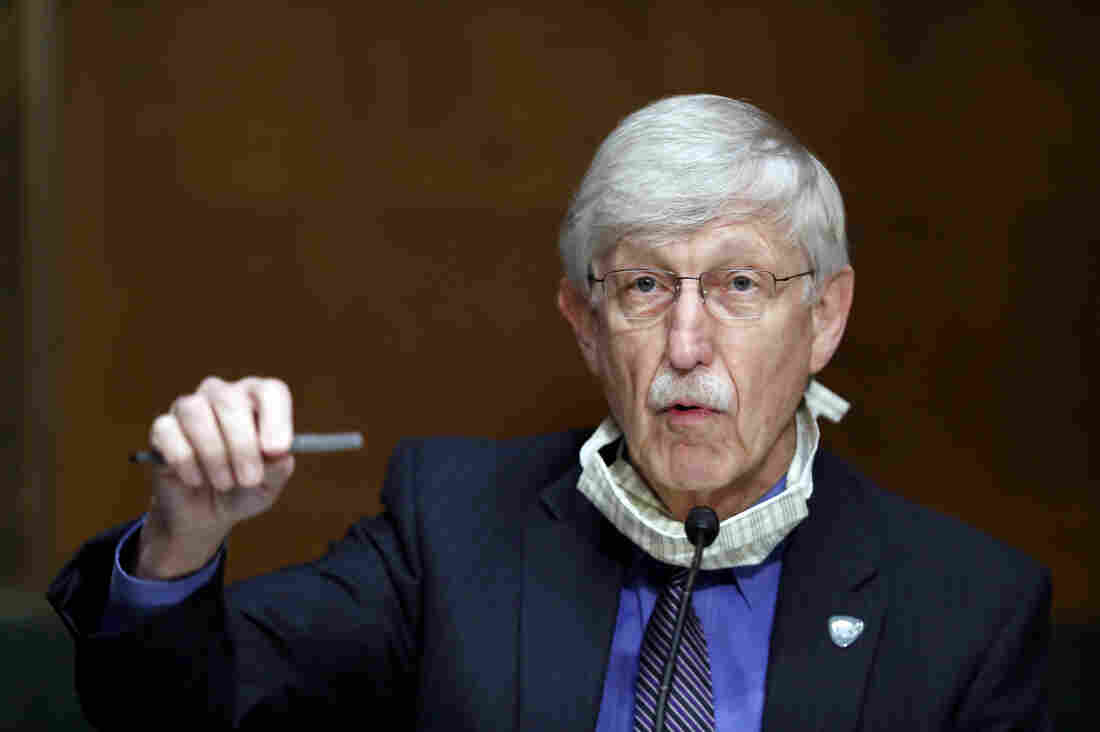 With COVID-19 hospitalizations and deaths at record levels, a top public health official called on religious leaders to keep their worship spaces closed, despite rising protests from some church leaders.

"The virus is having a wonderful time right now, taking advantage of circumstances where people have let their guard go down," said Dr. Francis Collins, director of the National Institutes of Health. "Churches gathering in person is a source of considerable concern and has certainly been an instance where super spreading has happened and could happen again."

Collins, himself a regular churchgoer who speaks often about his Christian faith, discussed measures that church leaders can take to protect their congregations in a Zoom conversation on Thursday with Russell Moore, president of the Ethics and Religious Liberty Commission of the Southern Baptist Convention.

"Most churches really ought to be advised to go to remote services, if they're not already doing so," Collins said.

His comments came even as the U.S. Supreme Court on Thursday ordered a federal district court to reexamine its previous support for restrictions on indoor religious services in California.

In a similar ruling last week, the Supreme Court struck down some restrictions on religious services in New York, ruling that the limits on in-person worship violated the First Amendment's protection of the right to free exercise of religion. In its Thursday ruling, the high court said the decision in the New York case meant the district court ruling upholding the California restrictions had to be reconsidered.

The Pasadena-based Harvest Rock Church and Harvest International Ministry had challenged those restrictions, which had been imposed by California Gov. Gavin Newsom in an effort to slow the spread of the coronavirus. The restrictions will remain in place at least temporarily, while the district court reviews its earlier ruling.

The vast majority of churches around the country — as well as synagogues, mosques and temples — have followed public health guidelines and limited in-person worship or ended it all together, but some congregations are resisting. A pastor in Rocklin, Calif., who has defied Newsom's order, opened his service on Sunday by pulling out his cell phone and reading joyfully from last week's Supreme Court ruling.

His celebration was misplaced, according to John Inazu, a law professor at Washington University in St. Louis who writes often on religious liberty issues.

"If you're a 5000-person church gathering in person without masks in violation of a state order, this ruling does absolutely nothing to help your cause," Inazu said.

Last week's Supreme Court ourt ruling actually allowed for limits on worship services. At issue was how such restrictions can be imposed. Inazu says religious worship should qualify as an essential activity. The question, he adds, is whether and when worship restrictions violate the First Amendment right to free exercise of religion.

The rulings come as some church leaders are growing impatient at the continued pressure on them to keep their worship spaces closed.

In his Zoom conversation, NIH Director Francis Collins noted how some churchgoers initially are compliant with public health guidelines, entering the church with their masks on and remaining six feet away from other churchgoers.

"Then you get to the end of the service," Collins said. "You can't get a bunch of Christians not to hug each other and not want to shake hands with the pastor as they go out the door and maybe have a conversation a lot closer than six feet away. And that's where the trouble happens."

Addressing the Christians tuned into the church-sponsored conversation, Collins urged them not to see a mask mandate as "a political statement" or "an invasion of your personal freedom."

"This is a lifesaving device," he said. "Think about it that way. And remember, when you put on that mask, you're protecting yourself from other people, but mostly you're protecting them from yourself. You're doing the altruistic, loving thing of saying, 'I'm going to protect people from me.' And that's a Christian action if ever I've heard one."