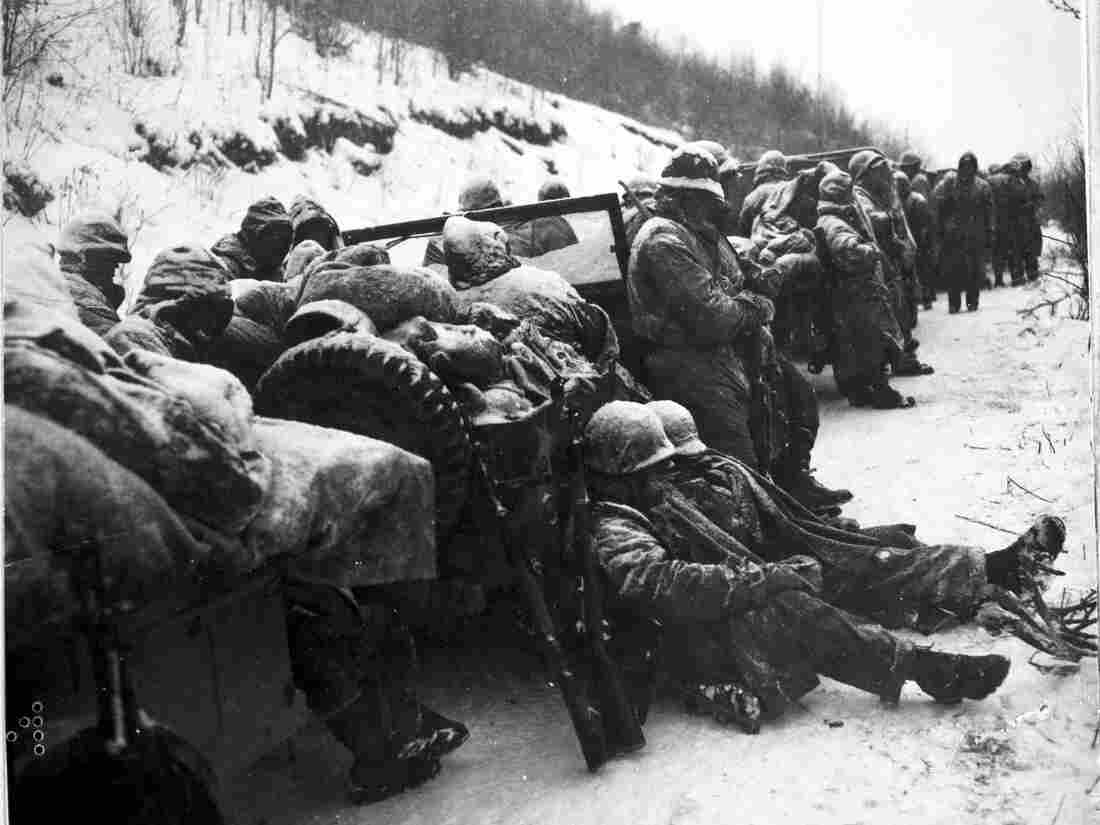 Marines of the 5th and 7th regiments who hurled back a surprise onslaught by three Chinese communist divisions wait to withdraw from the Chosin Reservoir area circa December 1950. National Archives hide caption 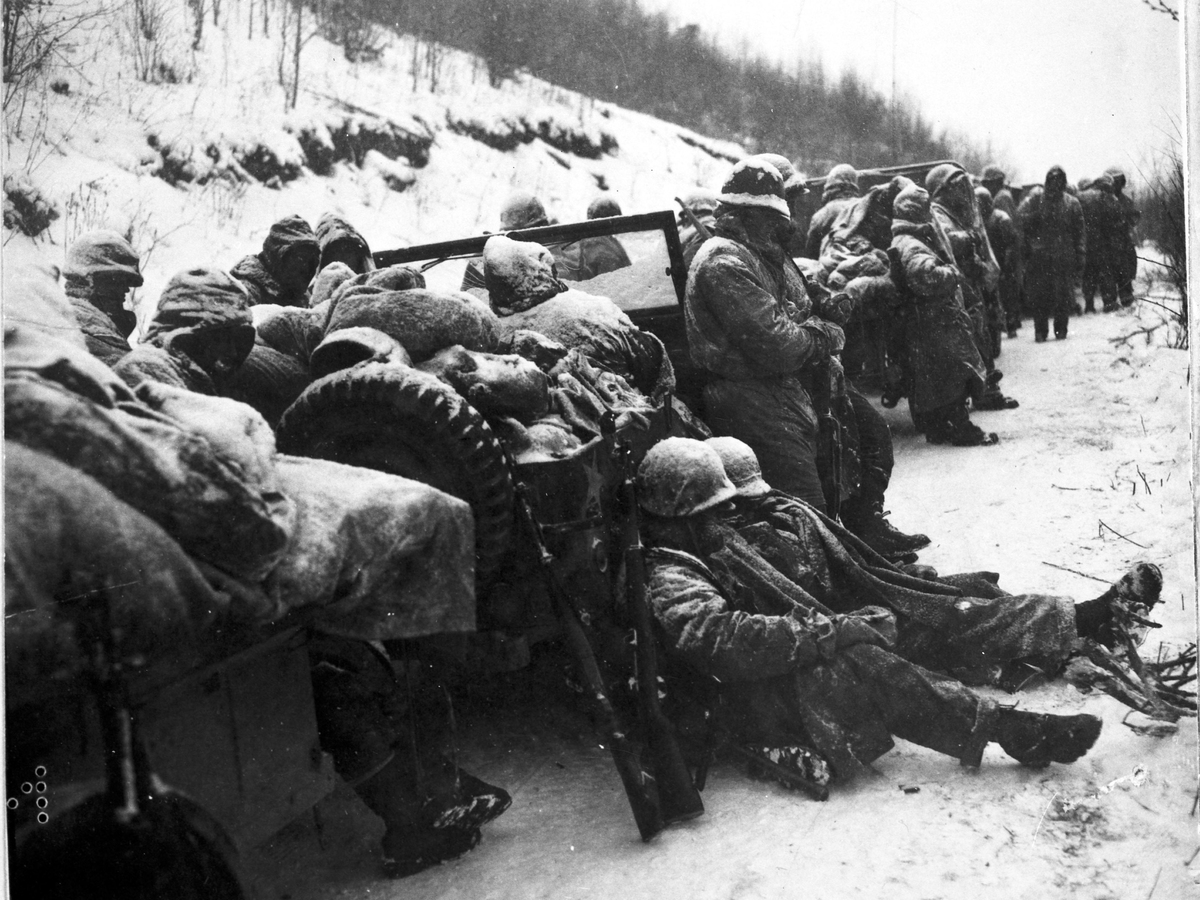 Marines of the 5th and 7th regiments who hurled back a surprise onslaught by three Chinese communist divisions wait to withdraw from the Chosin Reservoir area circa December 1950.

John Lee was not trained for combat, but he eventually found himself in the thick of a pivotal battle in the Korean War.

Lee was a sophomore at Korea University in Seoul when the war broke out in June 1950. He joined the South Korean army and was assigned as an interpreter to the U.S. 1st Marine Division.

At one point later in the war, he was taking cover under a truck, under fire from Chinese troops, on the main road leading away from the Chosin Reservoir in North Korea, in an area dubbed "Hell Fire Valley."

Marines around him were running out of ammunition. There was some on the truck, which was piled high with wounded Marines.

"Chinese bullets were flying like rain, and nobody dared to climb on the truck, pick up the ammunition and throw it to the soldiers," Lee remembers. "Then all of a sudden, I saw one man" — a Marine sergeant, he says.

"He did it. The truck was burning, and he was throwing ammunition to the troops, and pushing wounded soldiers off the truck," Lee says. "Then he was hit and killed, right there."

Seventy years later, with the Korean War still not officially over, and the United States and China once again jousting for influence in Asia, participants are drawing starkly differing conclusions from the Battle of Chosin Reservoir. The decisive conflict's lasting legacy is still visible on the Korean Peninsula. 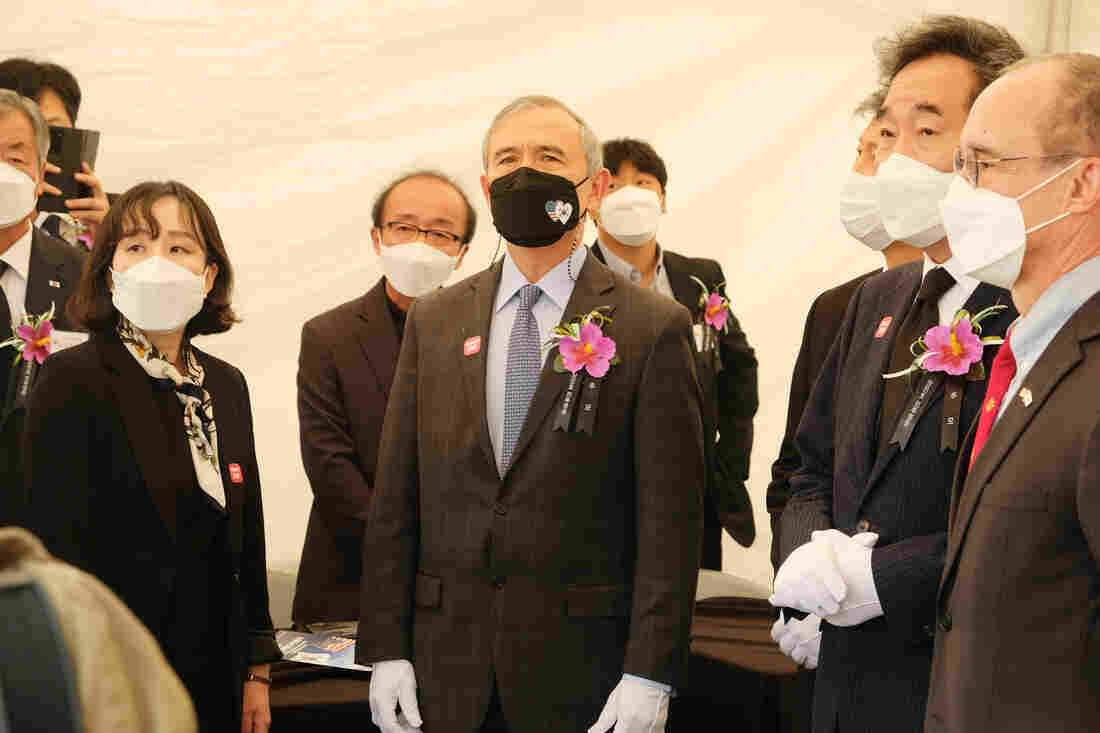 U.S. Ambassador to South Korea Harry Harris at an official commemoration of the battle in October in Seoul. Anthony Kuhn/NPR hide caption 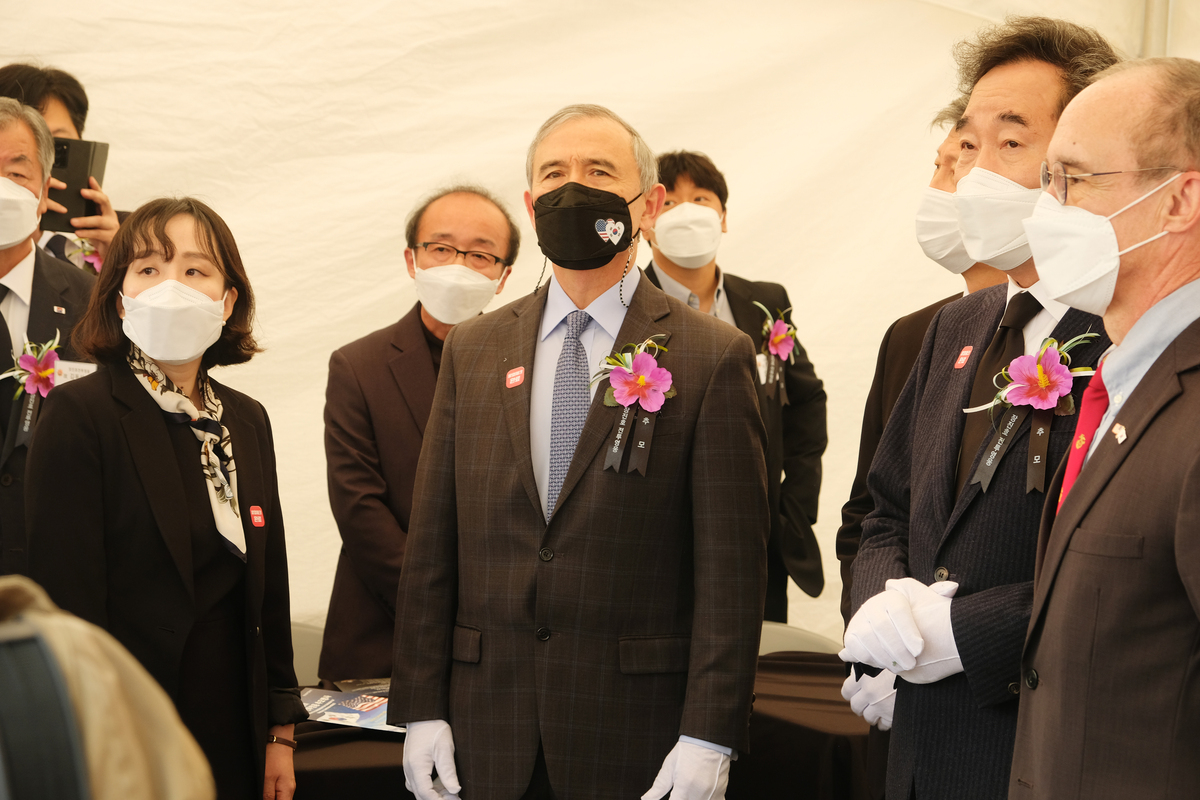 U.S. Ambassador to South Korea Harry Harris at an official commemoration of the battle in October in Seoul.

"The heroes of the battle of Changjinho laid the foundation for today's ironclad bond between the Republic of Korea and the United States," U.S. Ambassador to South Korea Harry Harris said in an official commemoration of the battle, in late October in Seoul. Changjinho is the Korean name of Chosin Reservoir.

"The battle for and the breakout from Changjin has become Marine Corps legend," said Lt. Gen. Steven Rudder, commander of U.S. Marine Corps Forces Pacific, in a videotaped message to the commemoration in Seoul. 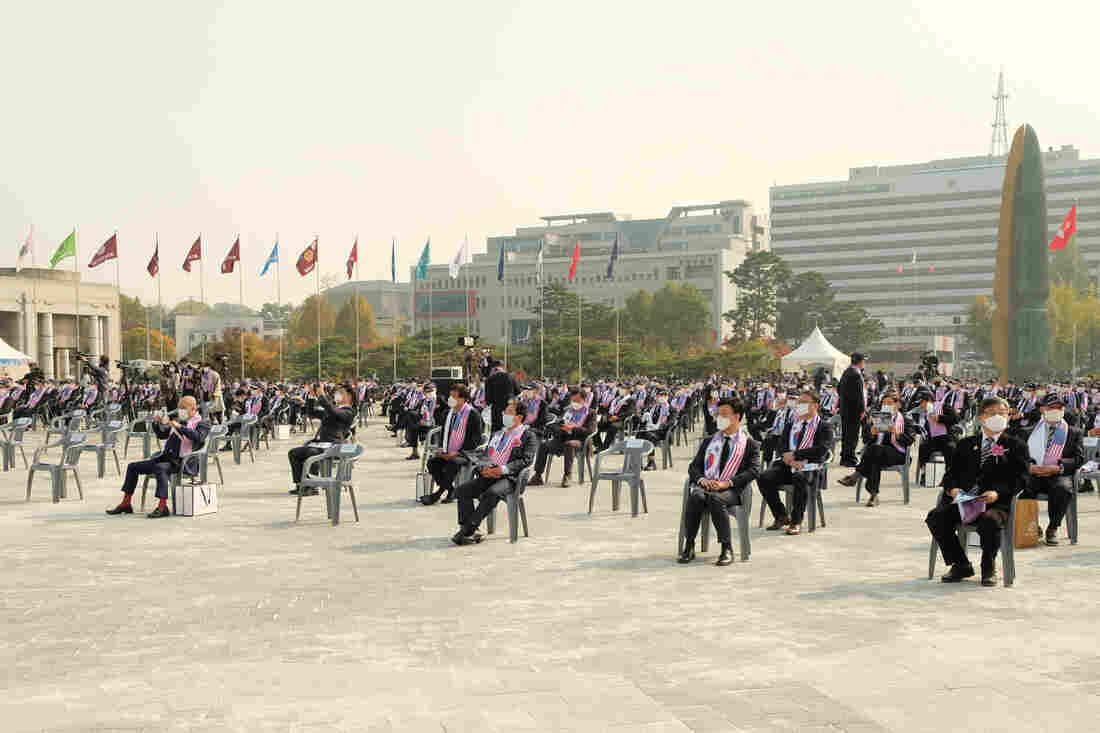 Attendees at the official commemoration of the Battle of Chosin Reservoir in Seoul. Anthony Kuhn/NPR hide caption 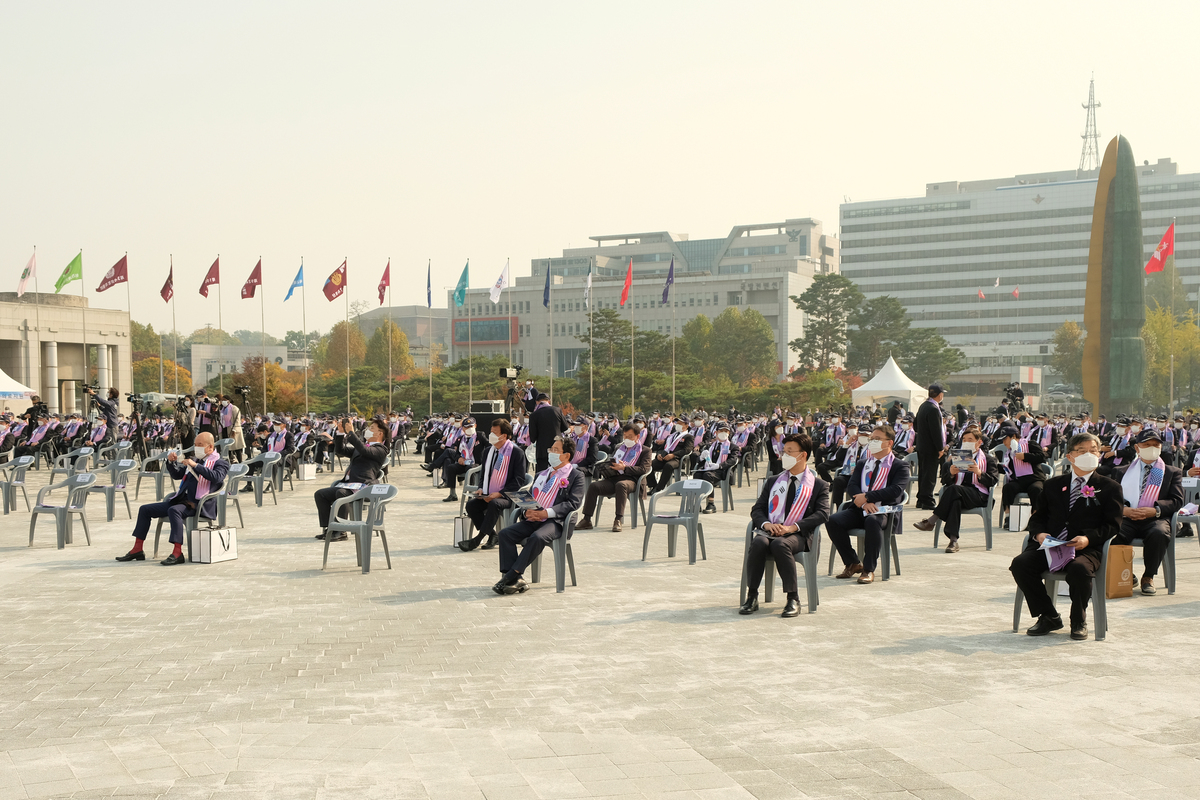 Attendees at the official commemoration of the Battle of Chosin Reservoir in Seoul.

"Surrounded and beset by some 120,000 Chinese troops," he said, "the battle was fought over some of the roughest terrain, during some of the harshest winter weather conditions of the Korean War."

The battle, in November and December 1950, marked a turning point in the conflict.

North Korean troops had invaded and occupied much of South Korea, beginning in June of that year. They were routed after Gen. Douglas MacArthur's surprise amphibious landing at Incheon, and U.S. troops pursued them into North Korea.

Chinese leader Xi Jinping has offered a different take on the Korean War and its lessons. China and North Korea successfully "resisted imperialist aggression and expansion," he claimed in a speech in Beijing in October. They "shattered the myth of U.S. military invincibility" and "maintained peace in Asia and the world."

China's government has put its catalogue of Korean War movies on heavy rotation on state television. It is also backing noted directors Chen Kaige and Tsui Hark in making a new action film due out next summer about the Chosin Reservoir battle.

China claims victory because it drove a vastly technologically superior foe from the battlefield, and, it argues, eventually forced it to sign an armistice agreement some three years later. 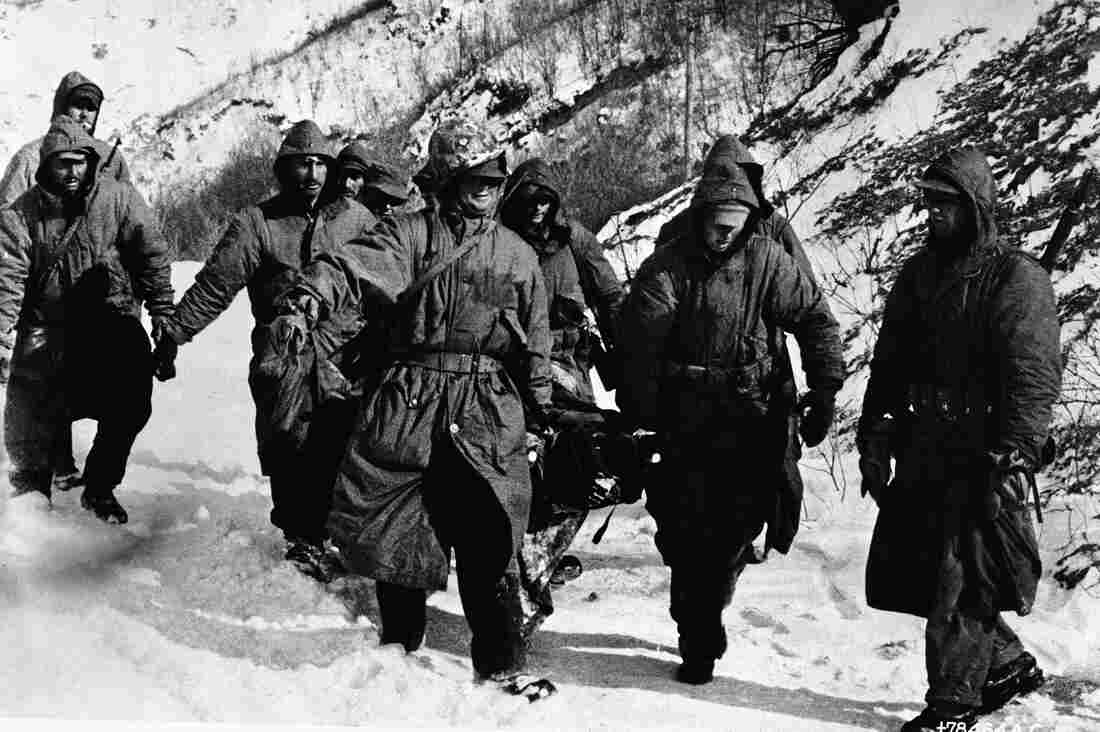 Frostbite casualties of 1st Marine Division and 7th Infantry Division, who linked to break out of Communist encirclement, wait for evacuation by plane in the Chosin area, North Korea in December 1950. Defense Department via AP hide caption 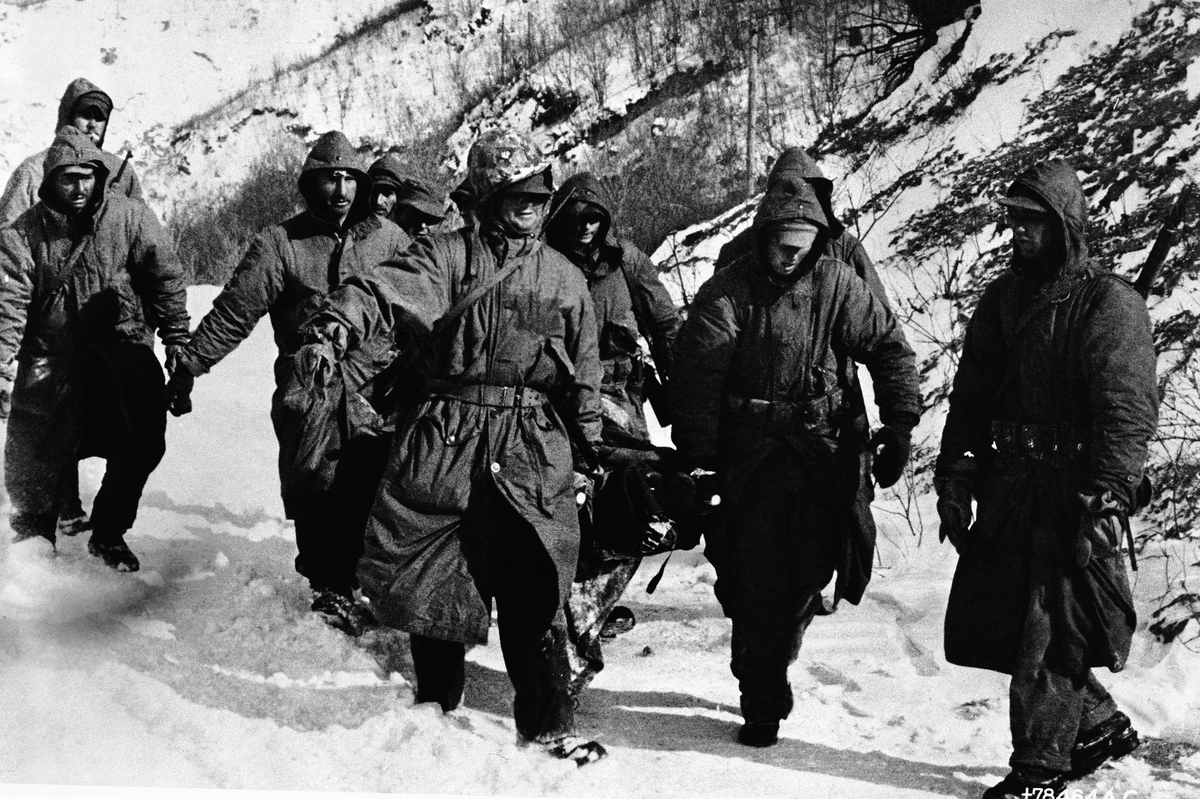 Frostbite casualties of 1st Marine Division and 7th Infantry Division, who linked to break out of Communist encirclement, wait for evacuation by plane in the Chosin area, North Korea in December 1950.

The U.S. believes it won because its forces broke out of their encirclement and escaped to fight again with most of their troops, weapons and vehicles, while inflicting heavy losses on the Chinese.

U.S. forces suffered more than 1,000 combat casualties and thousands more perished in the bitter cold, were wounded or went missing. China's estimates of its own casualties from battle and cold total around 50,000, although both sides dispute the other's figures.

One indisputable outcome of the battle and China's intervention was that it saved the North Korean state from extinction. "Korea could have been united under democracy, and the Korean people could have been much, much happier," argues Lee, the interpreter.

Assigned to the 1st Marine Division headquarters at Hagaru-ri, on the southern end of Chosin Reservoir, Lee was tasked with gathering intelligence from North Korean locals. He offers perspectives on the Korean experience of the Chosin battle.

"The Korean civilians who were chased out of their homes by Chinese, they know when Chinese are going to attack, where they are going to attack," Lee said in a phone interview from Florida, where he spends part of his time. "And they told all this intelligence to us."

Lee says the North Korean residents "were really friendly to us," and helped to retrieve — often under enemy fire — airdropped food and supplies for the U.S. troops, which landed outside their defensive perimeter.

After three days and nights fending off Chinese attacks, U.S. troops fought their way out of the mountains, and retreated to the port of Hungnam.

"I had a carbine. But the carbine was not working, so I picked up an M1 [rifle] and fired" at the attacking Chinese troops, Lee recalls.

Lee tried to help hundreds of North Koreans attempting to flee the Chosin area, but they were trapped when the retreating Marines blew up a bridge to stop pursuing Chinese soldiers.

"There's no other way but to dynamite the bridge," he says. "But at the same time, it's kind of a tragedy, in my view. Really, I really think of it even now. It's a really sad story." 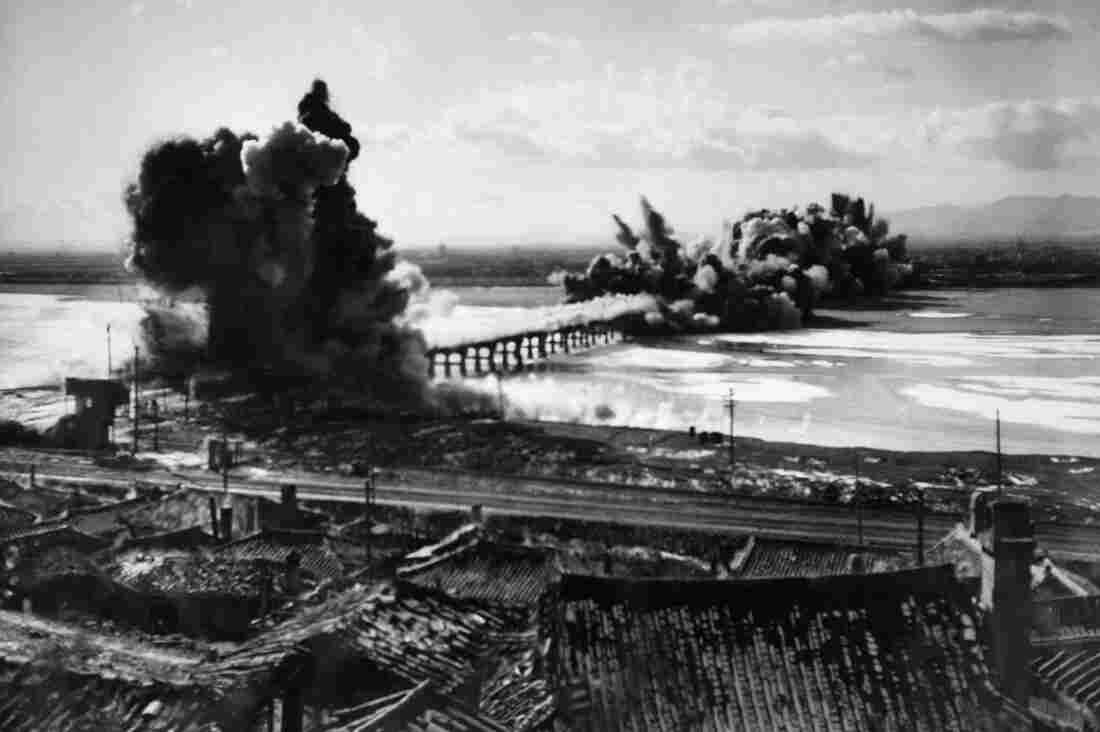 The Songchon River bridge into Hamhung is destroyed by demolition teams to slow the advance of Communist troops as United Nations troops evacuated the North Korean industrial city after the retreat from Chosin Reservoir. Max Desfor/AP hide caption 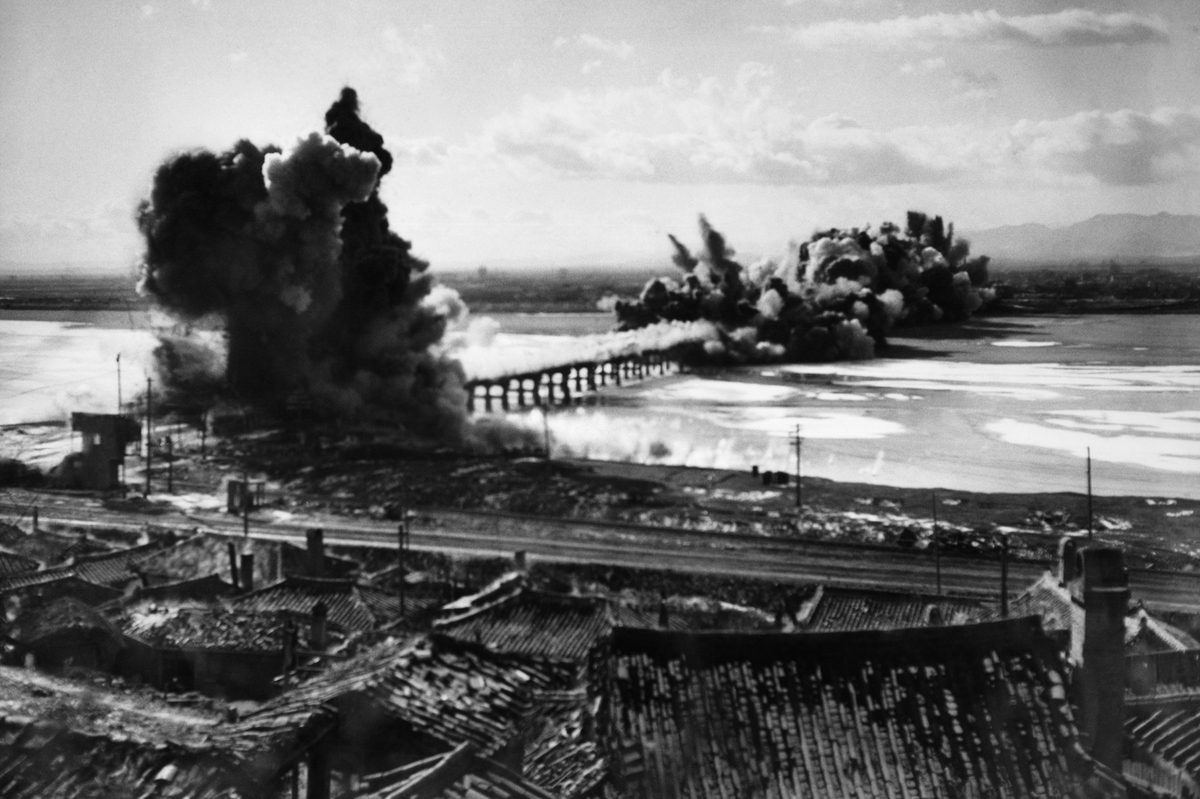 The Songchon River bridge into Hamhung is destroyed by demolition teams to slow the advance of Communist troops as United Nations troops evacuated the North Korean industrial city after the retreat from Chosin Reservoir.

About 100,000 other refugees did make it out with U.N. troops, as they left Hungnam port, in a massive wartime humanitarian operation.

Among them were several congregations of North Korean Presbyterians from areas around Hungnam, where U.S. and Canadian missionaries had evangelized and established hospitals and schools since the late 1800s.

One congregation member, 89-year-old Eom Dae-seong, was 19 in 1950. After North Korean soldiers killed his brother, a church clerk, he headed to Hungnam's harbor, where he recalls his pastor held a prayer service right on the beach.

"He wailed and begged God to let us survive," Eom says in a tearful interview, "vowing that we'd be even more faithful believers if we make it out alive."

Eom and his fellow church members did make it out, crammed aboard U.S. transport ships. They eventually settled in Seoul, where their Dongcheon Church still thrives. 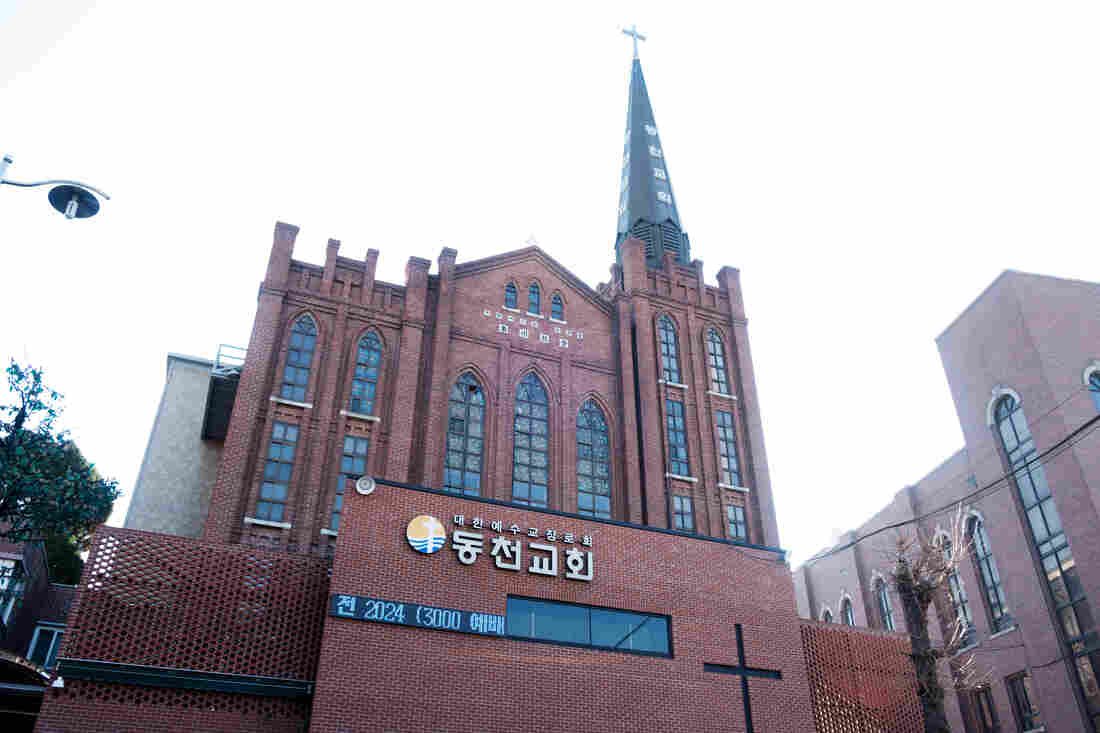 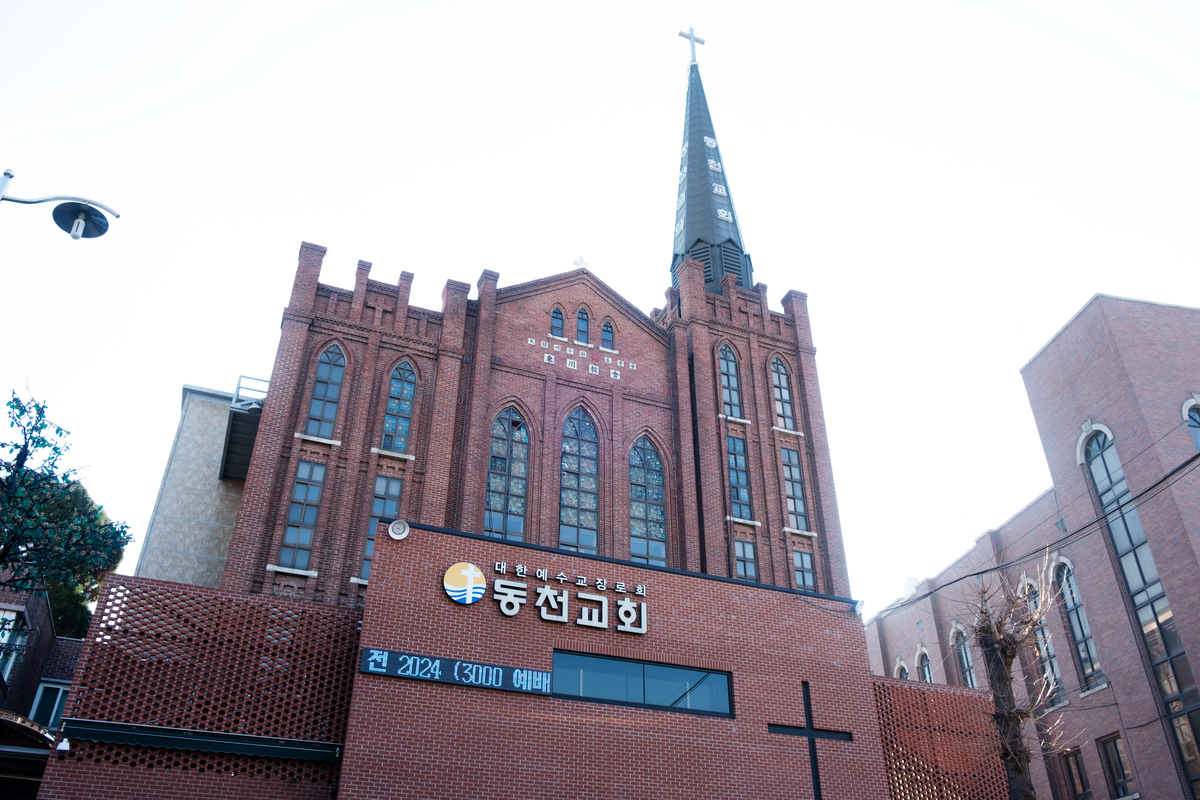 Dongcheon Church in Seoul where Eom and his fellow church members settled.

The descendants of the hundred thousand Hungnam evacuees now number around a million, and count among them Moon Jae-in, South Korea's current president.

The evacuees could not have known at the time that they would be separated from their families to this day. At the time, nobody was thinking very far into the future.

"Whether you're talking about the Marines, or the refugees, there was one thing on their mind — and that was survival," says Ned Forney, a Marine veteran who is writing a book about the Battle of Chosin Reservoir and the Hungnam evacuation. His grandfather, Edward Forney, was the Marine colonel who organized the evacuation.

One evacuee, Presbyterian church member Yang Seung-kwon, 81, still wishes for the chance to visit his former home in the North.

"I still get tears in my eyes, when I think about my hometown," he says. "I can still imagine every alleyway, and feel like I can still find my way back to my old home."