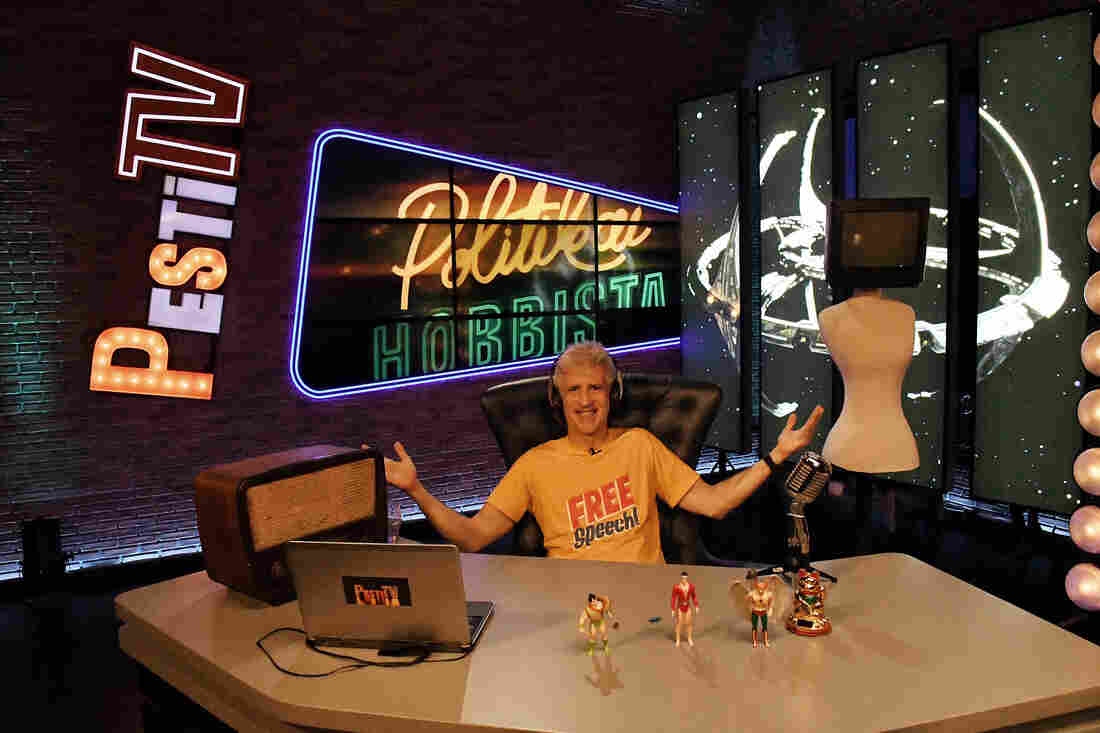 Zsolt Jeszenszky, creative director of Hungary's Pesti TV, hosts his talk show, Political Hobbyist. In Trump's refusal to concede, he hears a message for European nationalists: "If there is a system that's against you, you should fight, and you should not submit." Pesti TV hide caption 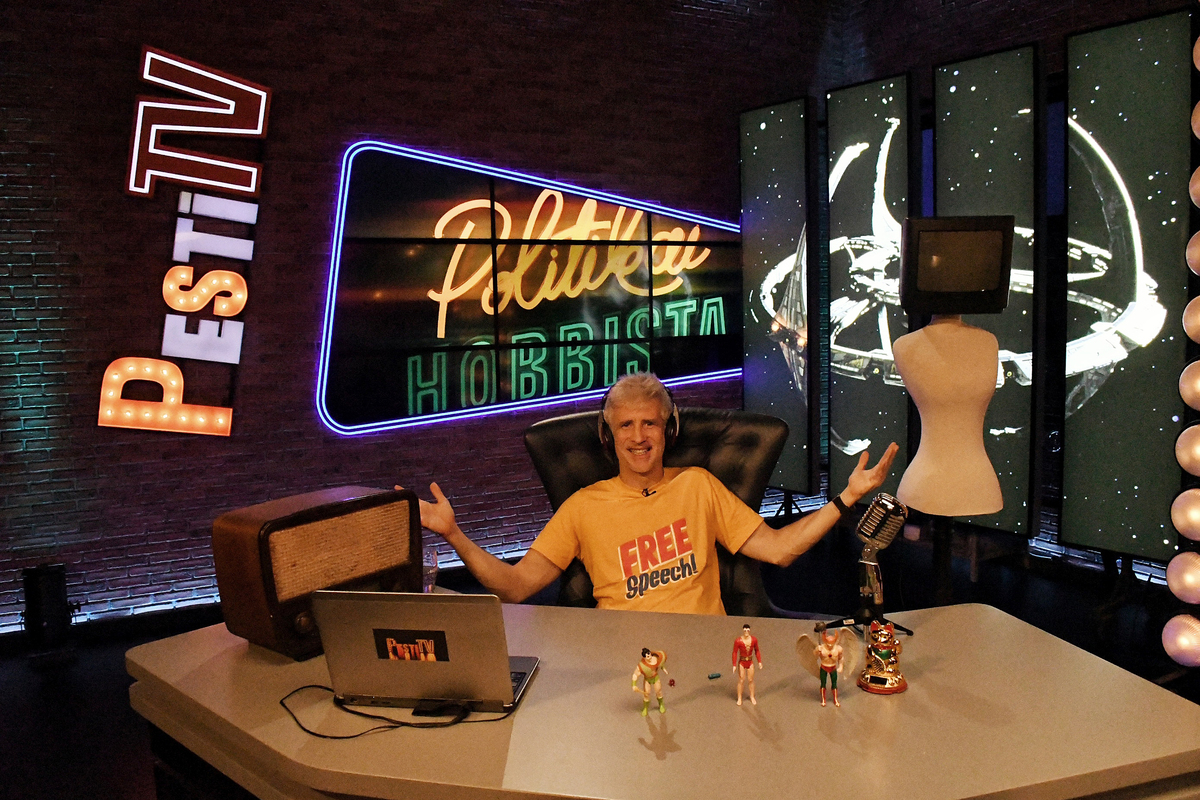 Zsolt Jeszenszky, creative director of Hungary's Pesti TV, hosts his talk show, Political Hobbyist. In Trump's refusal to concede, he hears a message for European nationalists: "If there is a system that's against you, you should fight, and you should not submit."

And — like Beck — Pesti TV's creative director, Zsolt Jeszenszky, doubts the result of the U.S. election.

On his talk show, Political Hobbyist — where Jeszenszky dons T-shirts that read (in English) "Liberals Suck" and "Free Speech!" — he recently compared the American election to a 1947 vote in Hungary rigged by communists.

"It's an obvious and blatant battle for what direction world policies should take," he told NPR by phone later.

After Trump, Europe's Populist Leaders Will Have 'Lost One Of Their Cheerleaders'

In Trump's refusal to concede, he hears this message for European nationalists: "If there is a system that's against you, you should fight, and you should not submit."

U.S. courts have resoundingly rejected Trump's voter-fraud allegations, for which his lawyers have failed to provide any evidence. Attorney General William Barr, one of Trump's most loyal supporters, can't back them up either.

Yet media supportive of nationalist leaders in Europe — especially in Hungary, Poland and Slovenia — are either repeating the false claims or suggesting President-elect Joe Biden is part of a vast liberal conspiracy to stifle conservatives who oppose migration, multiculturalism and the mainstream media.

"Populist, right-wing politicians in Europe won't publicly say, 'Hey, Biden is not legitimate,' but they will say it through their media," says Peter Kreko, executive director of the Political Capital think tank, based in Budapest, Hungary. "It's part of a strategy."

Pesti TV, which started broadcasting in September, is the latest addition to a media empire run by business owners who support Hungarian Prime Minister Viktor Orban. Most of those outlets have repeated Trump's election narrative.

In Slovenia, a TV station financed by the country's pro-Trump prime minister, Janez Jansa, blamed the "globalist, liberal-left cabal" for the election outcome. And in Poland, the editor of one pro-government newspaper claimed the mainstream media were "pressuring" the courts to help Biden in voter fraud cases.

"The message is: democracies, even the best ones, are not so reliable, and that blaming liberals for fraud is very much something that can happen," she says.

Orban, one of the only European Union leaders to endorse Trump, has congratulated Biden. But he had a frosty relationship with President Obama and accuses Democrats of imposing "moral imperialism" on nations. Kreko says Orban is not expecting a rosy relationship with the new U.S. president.

Orban's government and its supporters control most media titles in Hungary, including TV stations and online news sites. Kreko says these outlets are trying to discredit Biden because he slammed Hungary and Poland for undermining democracy.

Right-wing populist voters in Hungary will "be convinced that Joe Biden was elected in a fraudulent election," Kreko says. "So it's like, 'Who is the United States to lecture us on democracy?' "

The Hungarian government, he says, wants to translate the U.S. voter-fraud conspiracy allegations "to the language of the domestic politics." In pro-Orban media, that language almost always includes one name: George Soros, the Hungarian-born American billionaire philanthropist often demonized by Trump supporters for his funding of liberal causes.

Orban has made Soros a reviled figure in Hungary, claiming Soros is the mastermind of a vast liberal conspiracy to flood Europe with migrants and destroy traditional European identity and Christianity.

Jewish leaders have repeatedly warned that this vilification is anti-Semitic, but that didn't stop Philip Rakay, a conservative Hungarian TV pundit, from releasing a video, published last month on the website of the pro-Orban newspaper Origo, depicting Biden as a puppet of Soros.

"The government has been very consciously using phrases like 'Soros' puppet' for every vocal critic of their policies, every opponent who could be dangerous to them," says Katalin Cseh, a Hungarian opposition politician and lawmaker in the European Parliament, who has been labeled a "Soros puppet" herself. "Like the voter-fraud conspiracy theories, it's a way to discredit opponents, to present them as dishonest."

Pro-government media portray Soros, the European Union and now Biden as threats to the Hungarian government's agenda. They are already warning, without evidence, that the Biden administration could interfere in the country's next parliamentary elections in 2022.

Parliament speaker Laszlo Kover told state-run radio last month that opposition politicians are waging war against "those of us who do not belong to the homogenized, left-wing, liberal, communist, Neo-Marxist, hogwash coalition that wants to inflict moral terror on Europe."

In Poland, President Andrzej Duda of the right-wing populist Law and Justice Party won reelection this summer with the narrowest margin for any Polish government since the end of communism in that country in 1989.

"So when the government faces the next election ... maybe the liberal side might win," Hosa says. "The party now in power, any results that are not in their favor, they might want to take to court — the courts that they now control."

For now, she says, the Polish government is already "call[ing] its opponents 'traitors.' "