Accessibility links
Crowds Of Indian Farmers Gather For Days To Protest New Agriculture Laws Tens of thousands of Indian farmers are protesting for a ninth straight day. They accuse the government of using the coronavirus crisis to push through market-based changes without consulting them. Farmers protest Thursday on a highway at the Delhi-Haryana state border in India. They have descended upon the borders of New Delhi to protest new farming laws that they say will open them to corporate exploitation. Manish Swarup/AP hide caption 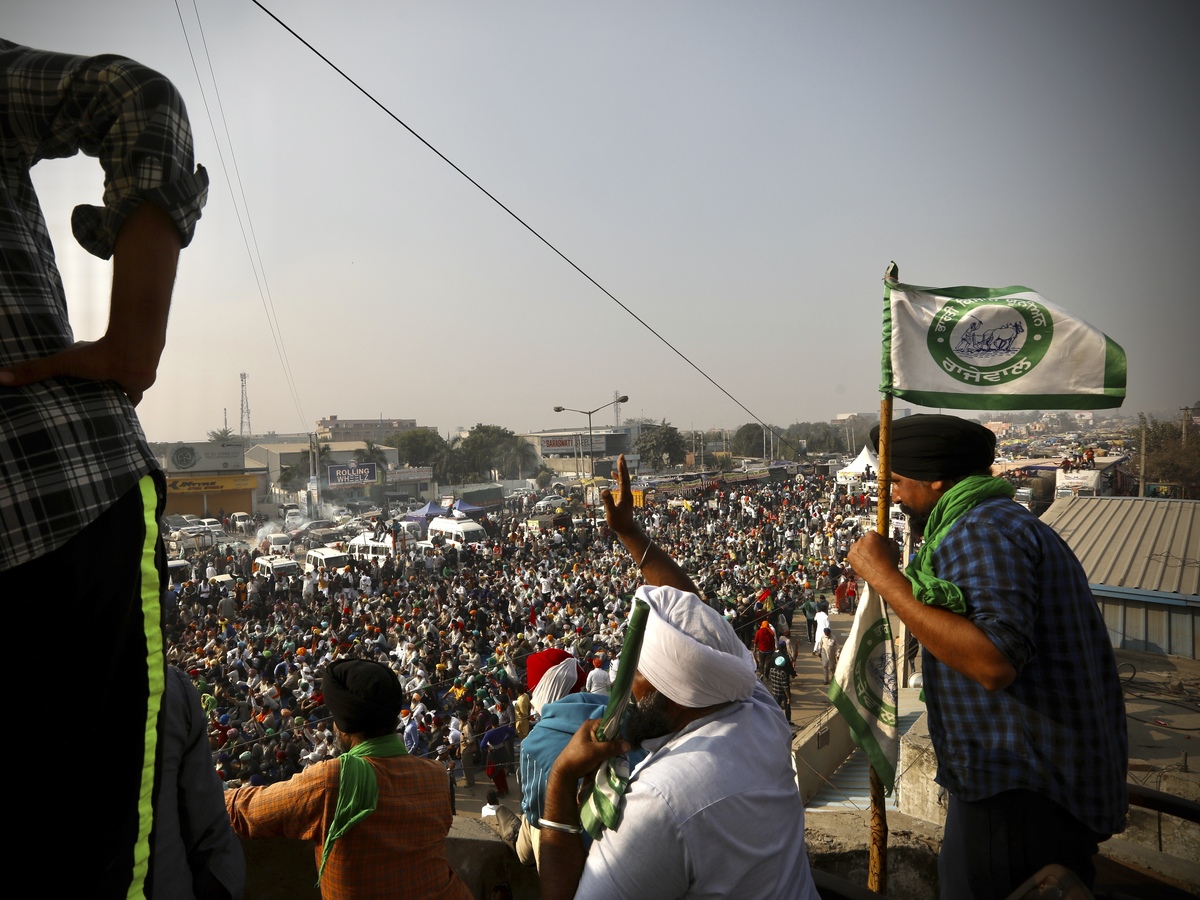 Farmers protest Thursday on a highway at the Delhi-Haryana state border in India. They have descended upon the borders of New Delhi to protest new farming laws that they say will open them to corporate exploitation.

Tens of thousands of farmers manned barricades and blocked highways Friday around India's capital of New Delhi for a ninth straight day, protesting new agricultural laws they fear may hurt their already-meager profits.

Passed in September, three new laws aim to deregulate Indian agriculture, by encouraging farmers to sell directly to companies. The government has long been a middle man, guaranteeing minimum prices for certain crops. The laws say farmers will still have price assurances, but the language is vague, and farmers are nervous about losing government support.

"We're worried no one will buy our produce, and that we'll go into debt," says Harinder Singh, general-secretary of a Punjabi farmers union, who spoke to NPR by phone from the truck where he's been sleeping in a protest camp. "We want the government to repeal these laws."

Talks between union representatives and government officials broke down Thursday night, and more talks are scheduled for Saturday.

Meanwhile, the protests have spread to other Indian cities, including some in the state of Punjab, India's breadbasket, and abroad. Followers of the Sikh faith, founded in Punjab, joined a car caravan Wednesday near the Indian Consulate in San Francisco. On Friday, India's foreign ministry summoned Canadian diplomats after Canadian Prime Minister Justin Trudeau voiced solidarity with the protests.

More than half of Indians, in a country of nearly 1.4 billion, eke out a living on farms, according to Indian census data.

"But they are not getting due respect, nor the political and economic space they deserve," says Medha Patkar, a social activist who joined the farmer protests in Delhi and Indore.

Small-scale farmers have helped India over the decades become self-sufficient in food. But Patkar accuses the Indian government of eroding a long, proud agrarian tradition that Mahatma Gandhi championed.

"This sector is not just neglected, but deliberately ignored and underestimated because of the present paradigm of development, which is not just market-oriented but consumerism-based," she says. "We want production by the masses – as Gandhi said — not mass production."

Prime Minister Narendra Modi makes no secret of wanting to modernize and industrialize India. It's a promise he was elected on – though critics say he has failed to deliver.

Decades ago, India was a big recipient of international food aid. But the use of pesticides and machines led to a green revolution starting in the 1960s, which allowed India to become self-sufficient in food. Nowadays it grows surpluses of wheat and rice, for export. 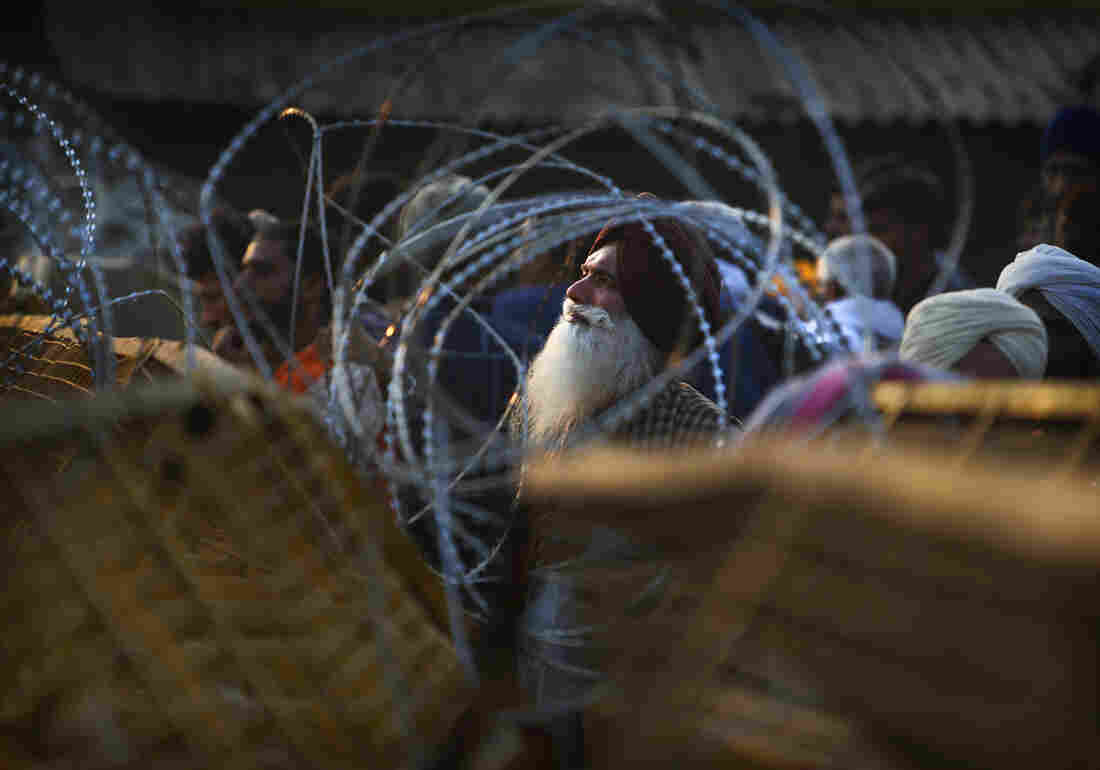 An Indian farmer looks through barbed wire that police put up at a protest site Thursday at the Delhi-Haryana state border. Manish Swarup/AP hide caption

But it also manages to do that with fewer workers, compared with back in Gandhi's day.

"The heart of the matter is that India has too many farmers," says Sadanand Dhume, a fellow at the American Enterprise Institute. "So what you have is a government that is trying to improve the lives of those farmers by giving them more choices. But you also [have] a section of farmers who are gripped by a very understandable anxiety about what these changes may end up meaning for their lives."

Dhume says the government rushed out these agricultural laws, without consulting farmers, and did a poor job of explaining them to those who would be most affected. It also did so in September, at a time when government-regulated wholesale markets were shut, because of the pandemic. So farmers felt particularly vulnerable. And many of them already live so close to the bone.

On top of that, India has now entered a recession – two consecutive quarters of negative growth — for the first time since the government began publishing quarterly gross domestic product figures.

The coronavirus has erased the robust economic growth India enjoyed for decades. So it's not the right time for the government to try to deregulate and wean farmers off state support, says Jayati Ghosh, a development economist.

"Alternative occupations are not emerging. We are not industrializing rapidly enough, and we are not generating manufacturing employment. So there's nothing else for people to do," Ghosh says. "The way to diversify is not to kill off a sector, but to make another sector much more attractive and available, with income opportunities – and that hasn't happened."

Farmers are desperate, she says. But so are workers in other sectors. Unemployment had already hit a four-decade high, even before the COVID-19 outbreak.

Since the country's independence from Britain in 1947, India's economy has overall been a success story. Hundreds of millions of people have emerged from poverty. The challenge now is to prevent them all from slipping backward.

"Never mind the cold, or the water cannons and tear gas from police," an unidentified female farmer told local TV this week as protests raged around her in Delhi.

"We'll stay here all winter, until we get help."