Accessibility links
Looted Nazi Art Again Before Supreme Court In 2004 it was the famous "Woman In Gold" painting by Gustav Klimt. Now it is the Guelph Treasure. Both were owned by Jews and expropriated by the Nazis. 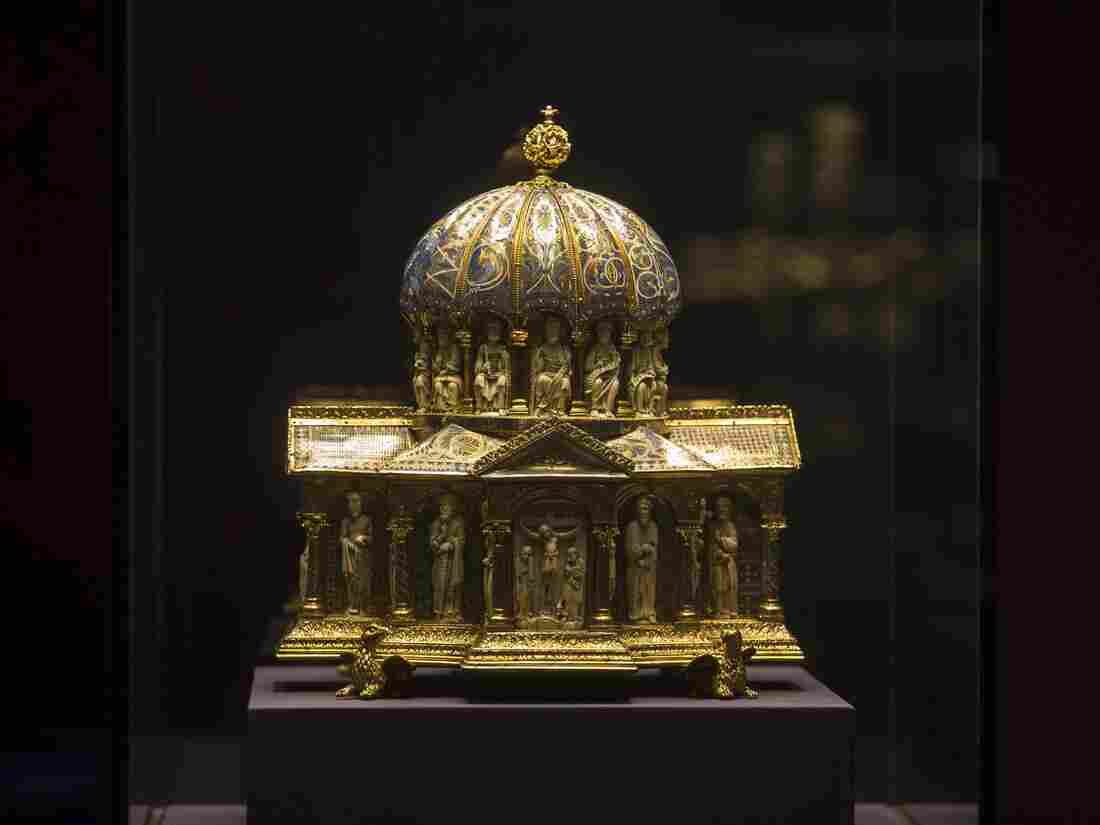 The medieval Dome Reliquary (13th century) of the Guelph Treasure is displayed at the Bode Museum in Berlin. It's part of collection of priceless artwork that finds itself at the center of a legal argument at the Supreme Court. Markus Schreiber/AP hide caption 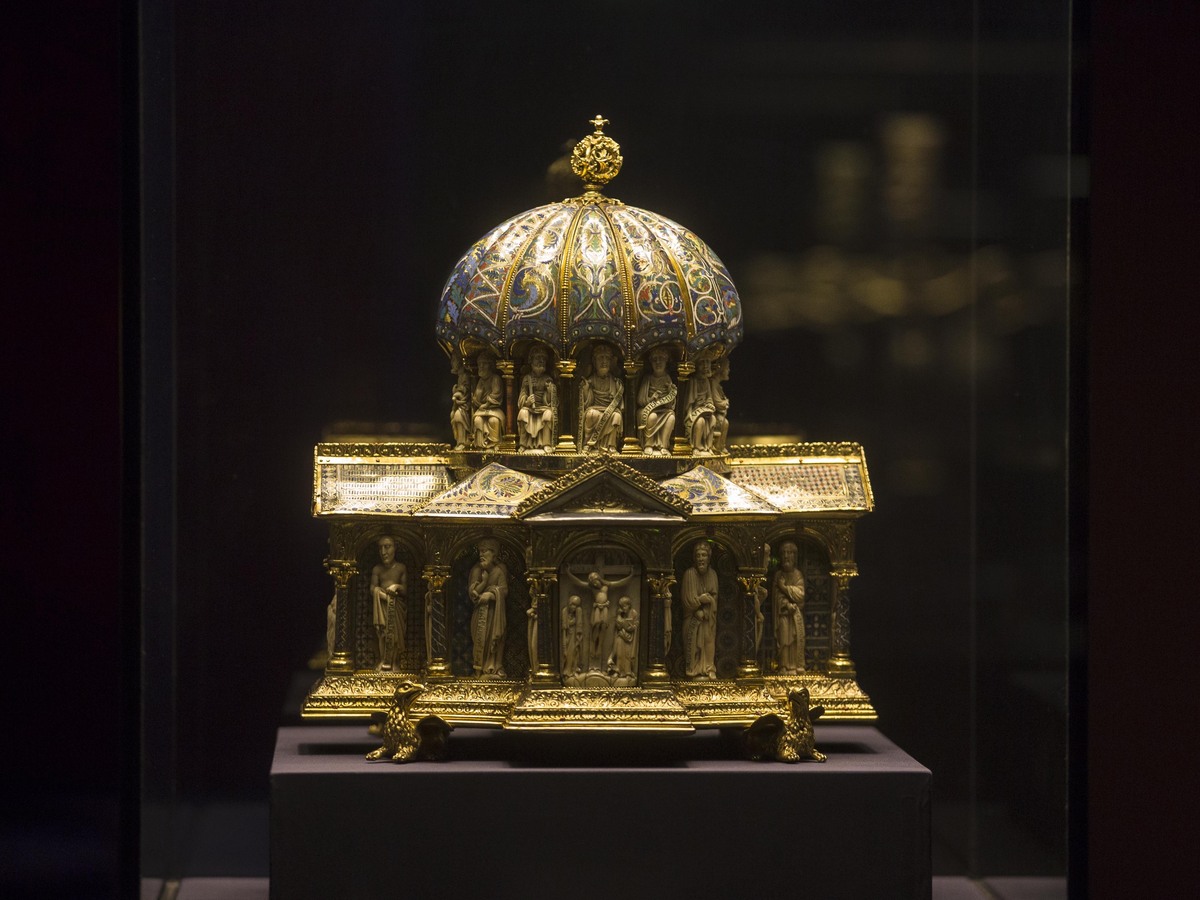 The medieval Dome Reliquary (13th century) of the Guelph Treasure is displayed at the Bode Museum in Berlin. It's part of collection of priceless artwork that finds itself at the center of a legal argument at the Supreme Court.

Jed Leiber remembers playing chess with his grandfather when he was a boy, and learning about all that Saemy Rosenberg had left behind behind when he fled Germany in the 1930s.

"I made a promise to myself that one day I would find everything that was taken from him and have it returned," Leiber says.

So Leiber was listening intently on Monday when the justices dealt with his grandfather's famous art collection and its coerced sale to the Nazis. It was not the first time the court has dealt with the Nazis theft of important works of art.

In 2004, the court ruled that Maria Altmann, an elderly Jewish refuge living in Los Angeles, could sue the government of Austria in the United States to recover one of the most famous works by painter Gustav Klimt, the Woman in Gold, a portrait of her aunt. She won in the high court, and the Austrian government ultimately returned the painting, which she sold for $135 million to Ronald Lauder for his Neue Galerie in New York City.

Fast forward to Monday when the justices were hearing Leiber's case, centered on the Guelph Treasure, one of the most famous collections of medieval artifacts in existence. It was once owned by Leiber's grandfather and two other Jewish art dealers. They were forced to sell it for a fraction of its value in 1935, and it is now on display in a German state museum in Berlin.

"This was purchased by Hermann Goering, perhaps one of the most notorious art thieves of all time, for his pal Adolf Hitler, the monster who killed 6 million people, for a museum," Lieber says. "Why would Germany want to defend" that? 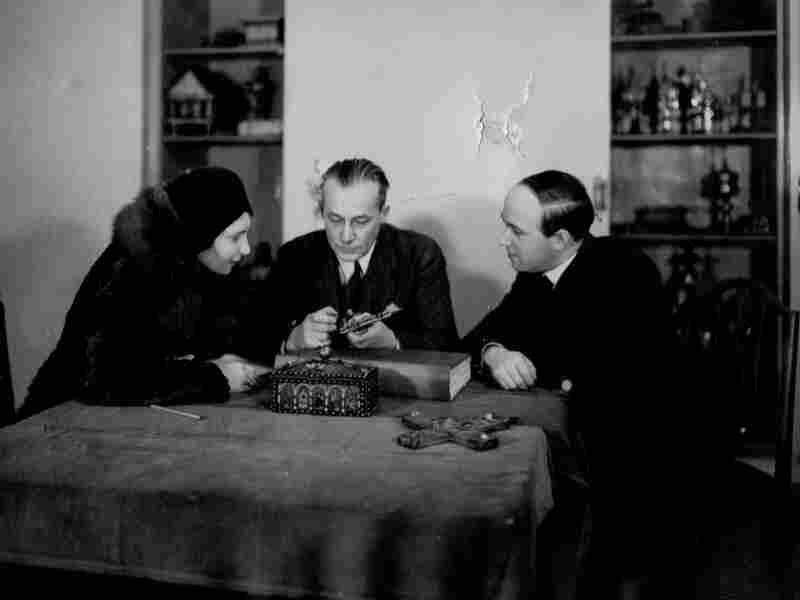 Saemy Rosenberg and his wife, Lisellotte, are seen with an unnamed man. Saemy Rosenberg was forced to sell his priceless art collection to the Nazis. Now, his grandson wants the Supreme Court to intervene. Courtesy of Jed Leiber hide caption 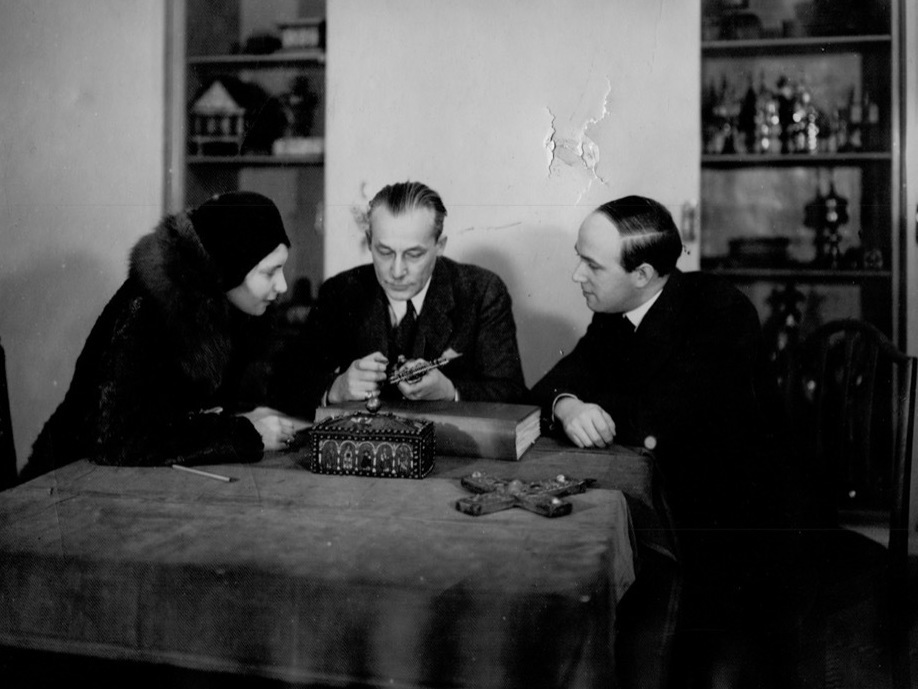 Saemy Rosenberg and his wife, Lisellotte, are seen with an unnamed man. Saemy Rosenberg was forced to sell his priceless art collection to the Nazis. Now, his grandson wants the Supreme Court to intervene.

In the Supreme Court Monday, the German government, backed by the Trump administration, argued that foreign governments and their agencies are shielded from lawsuits under the Foreign Sovereign Immunities Act.

But Leiber's lawyer, Nicholas O'Donnell, contended that this suit and others like it are specific exceptions under the law because, as he put it, "The Nazi government set out explicitly to destroy the German Jewish people by taking their property. And Congress has specifically identified the Nazis' looting of art from the Jewish people as genocidal." This is not a human rights case, he maintained, but a property rights case.

But justices both liberal and conservative, justices who are Jewish and those who are not, seemed doubtful.

Wouldn't your reading amount to "a radical departure" in the way the law is interpreted, asked Justice Clarence Thomas.

Justice Stephen Breyer said that O'Donnell's argument seemed to have "no limit."

"Terrible things happen in this world," he noted, adding that the list of terribles "goes on and on." And if we can bring court cases in the U.S. for those things, "can these other countries do the same and accuse us?" he said, citing the "Japanese internment, which involved 30,000 people in World War II." Breyer said that's why, in his view, commissions set up to deal with these kinds of questions may work better.

In an interview, O'Donnell said that while the Austrian government surprised many after the Altmann case by setting up a commission that has settled with hundreds of Jewish heirs in cases involving Nazi art theft, Germany has not.

"Germany, a much larger country with a much more central role in the events in question" has handled just 17 such cases, he says.

He adds that the archival records of the sale in this case tell a dark tale. When the Nazis were talking among themselves, he says, it is clear what they were doing. Nazi officials "were talking in very overt terms about the undervaluing of the collection they were targeting." In fact, he notes, any museum that wanted to offer a fair price was simply waved off.

In the end, Saemy Rosenberg, Leiber's grandfather, would flee with his wife and their daughter to the United states where he would rebuild his life as an art dealer. The other two owners would not fare as well. Julius Goldschmidt escaped to London, a broken man. And Z.M. Hackenbroch was beaten to death by a Nazi mob in Frankfurt.

It's not clear what Jed Lieber and the other heirs ultimately want, or would settle for. The Guelph Treasure is valued at $250 million. At the very least, Leiber says he wants an acknowledgment.

"The story about how it came to be in that museum [in Berlin] is important to me," he says. "My grandfather needs to be part of that story and how it was recovered."

In the lower court, Leiber won the right to sue, but based on the tone of Monday's argument, his odds for preserving that victory at the Supreme Court look iffy.