Accessibility links
As A Stepparent, Kamala Harris Puts 'Families You Choose' In The Spotlight When Vice President-elect Kamala Harris takes office, she brings with her what stepdaughter Ella Emhoff describes as a "big blended family." Other blended families are celebrating that visibility. 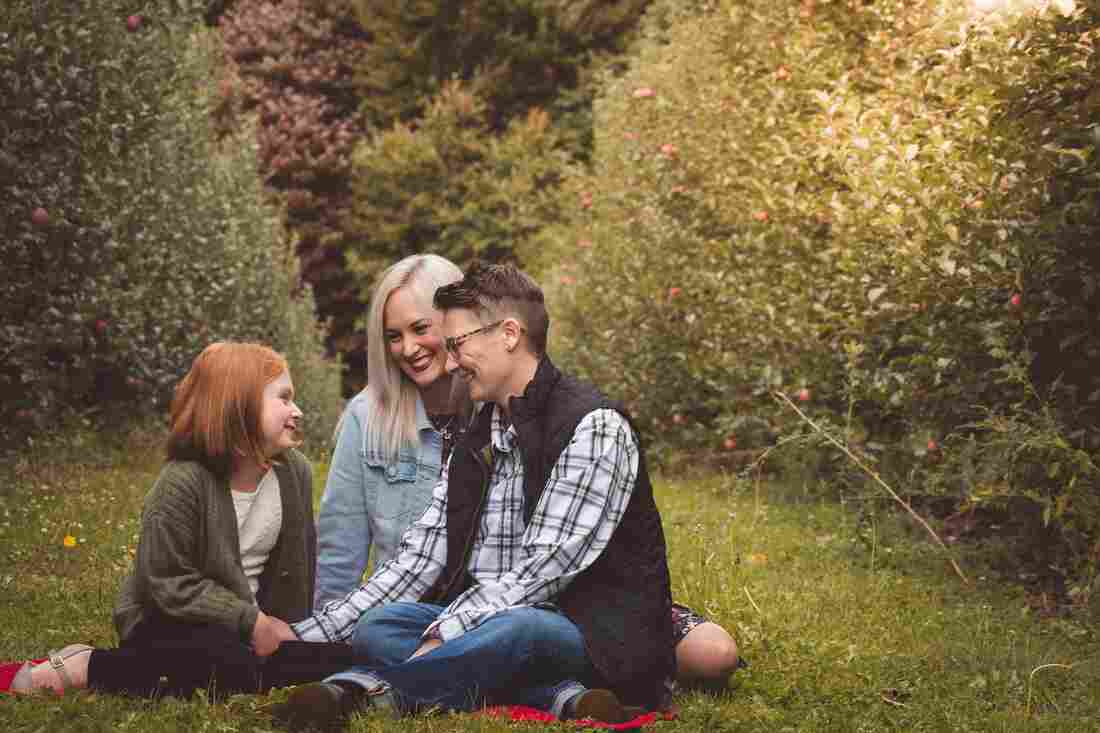 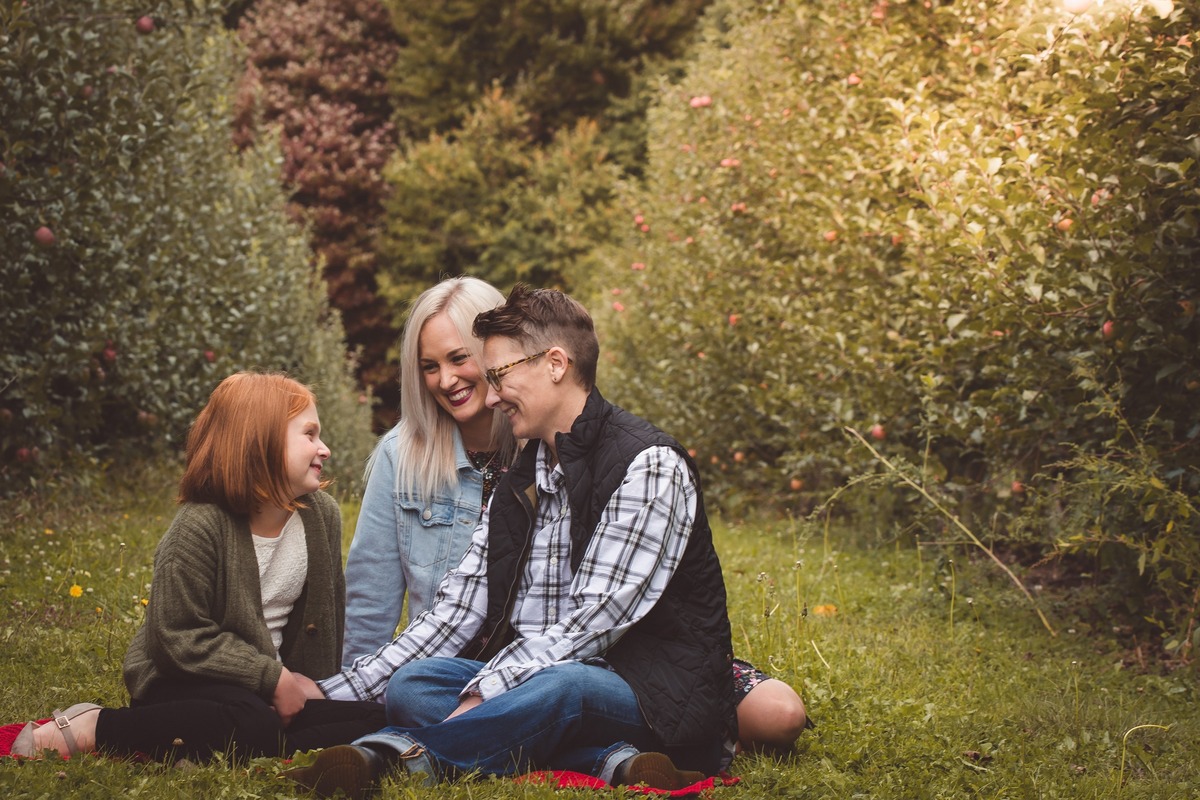 When Beth McDonough started to tell her stepdaughter, Mia, about the woman who will be the country's next vice president, one of the first things she told Mia is that Kamala Harris has a stepdaughter too.

"She just lit up because we live in a super-small town, and as a kid with two moms and in a blended family, she faces a lot of not being able to see what her family looks like in other families," said McDonough, 33, who lives in Meadville, Pa., with her stepdaughter and wife.

When Harris takes office in January, she herself will shatter historic barriers. Her family will also highlight something else: one of the many different ways in which families are made.

Harris married her husband, Doug Emhoff, in 2014, and he has two adult children, Cole and Ella Emhoff, from a previous marriage.

According to the Pew Research Center, 16% of children are living in what the Census Bureau terms "blended families," a household with a stepparent, stepsibling or half sibling.

Harris and Emhoff were set up on a blind date by Harris' best friend, Chrisette Hudlin, who gave her one instruction: Don't Google him, don't overthink it. Harris didn't.

They had an hourlong phone call and a first date in Los Angeles. After their second date, Emhoff was ready to introduce Harris to his children, who were in high school and middle school. But in her memoir, Harris wrote that though she was eager to meet them, she pumped the brakes. 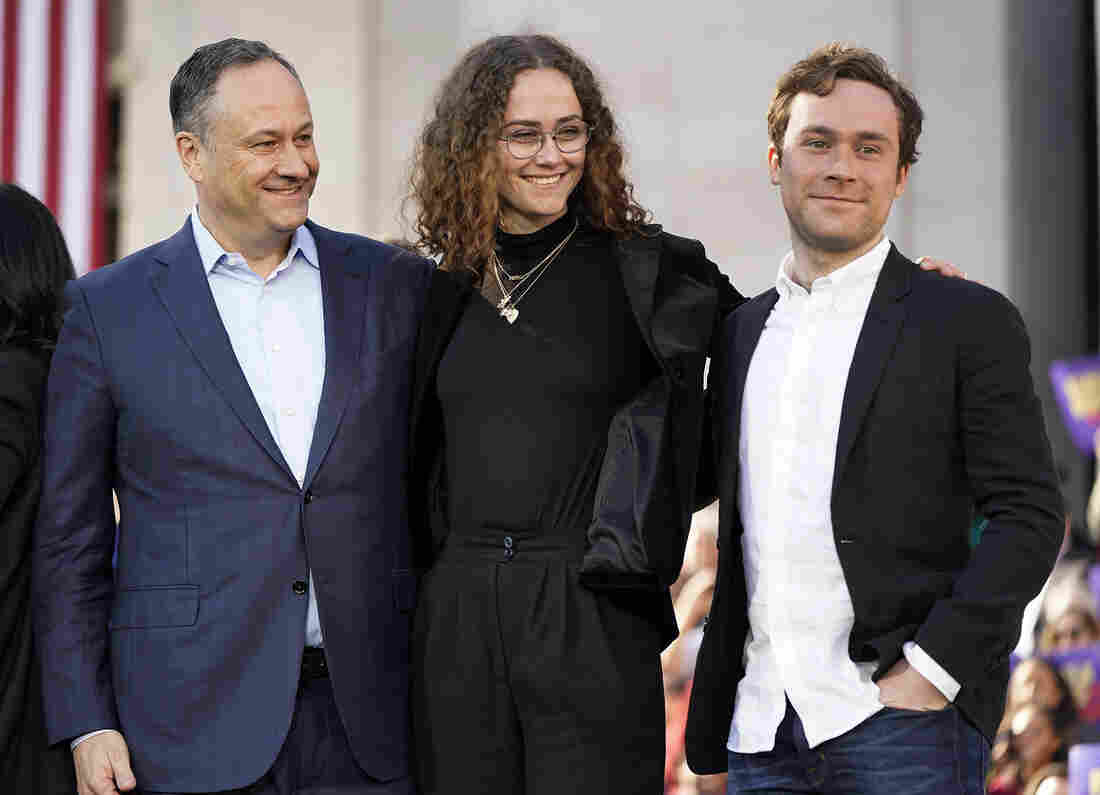 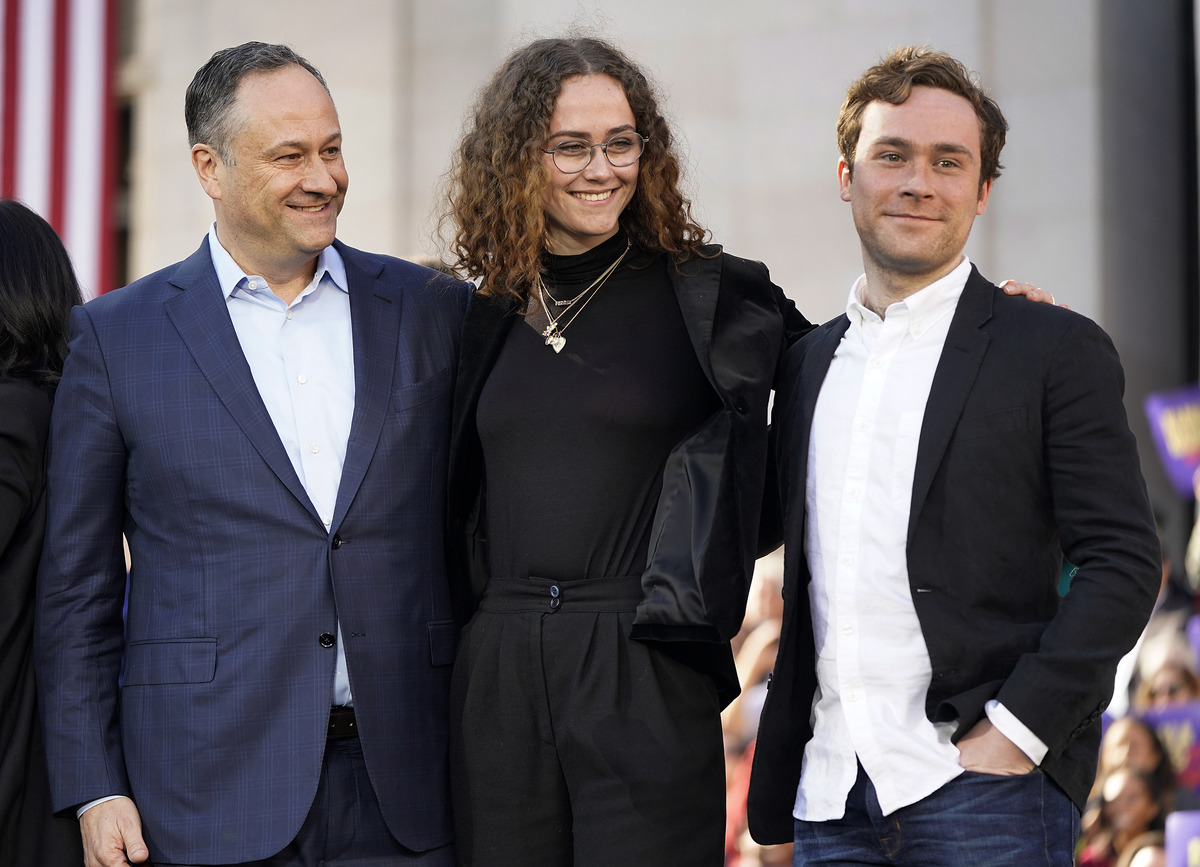 "As a child of divorce, I know how hard it can be when your parents start to date other people," she wrote. "I wanted to make sure that Doug and I had something real and lasting before I waded into Cole's and Ella's lives."

They met two months in, at Reel Inn, a seafood joint in Malibu, Calif., off of the Pacific Coast Highway, followed by an art show at Cole's school.

"Doug later joked that I got completely inundated with their lives that night," Harris wrote, "but I think it's more accurate to say that I was hooked, and Cole and Ella reeled me in."

Naja Hall runs an online community, VIP Stepmom, to help people learn to navigate situations like this. She said Harris' embrace of her role "gave so many people confidence."

"She makes it look easy, but we all know it's not," Hall said of Harris. "It's kind of like this unspoken sisterhood that now exists. And we just happen to have the [future] vice president and the first lady in our sorority now."

During her first speech as a member of the Democratic presidential ticket, Harris pulled back the curtain on her family life. She described cooking Sunday dinner, cheering on the bleachers at swim meets and the chosen name that Cole and Ella picked for her. She has written that the word "stepmom" didn't fit for her family.

"I've had a lot of titles over my career," she said at the Democratic National Convention in August. "But 'Momala' will always be the one that means the most."

The word "Momala" trended on Twitter. During the DNC, Ella Emhoff joined Harris' sister, Maya, and niece, Meena, to introduce the Democratic vice presidential nominee to the nation.

"You're a rock, not just for our dad, but for three generations of our big blended family," Ella Emhoff said, again calling her "Momala," which rhymes with Harris' first name. 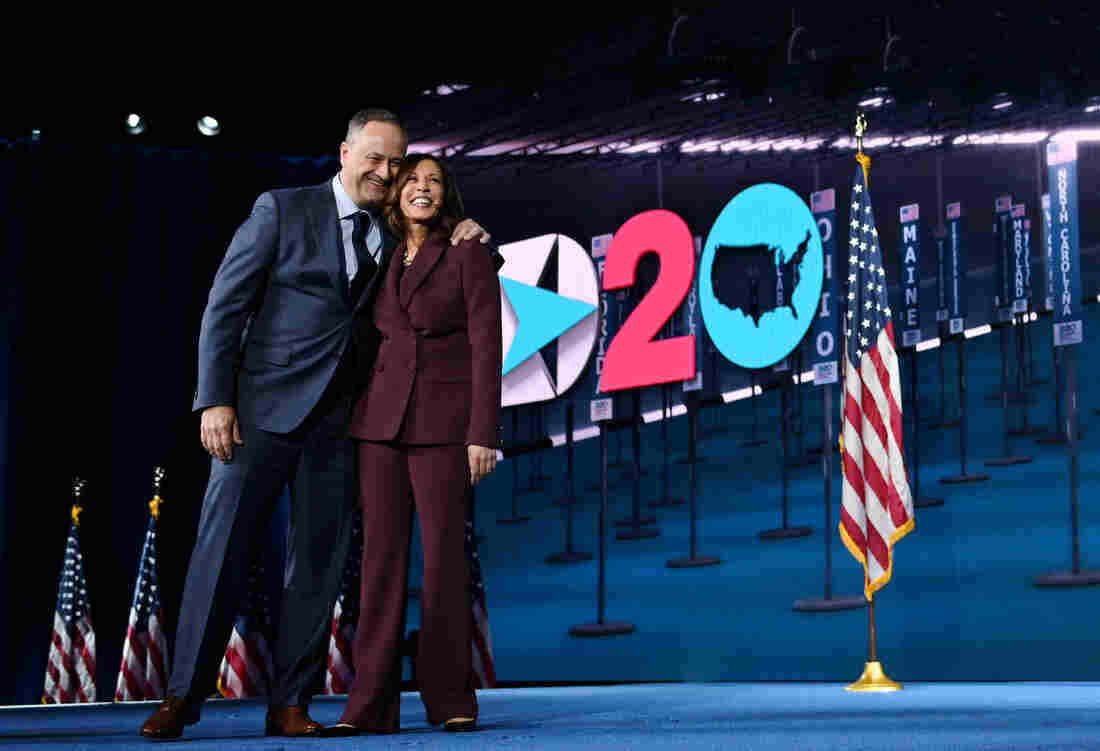 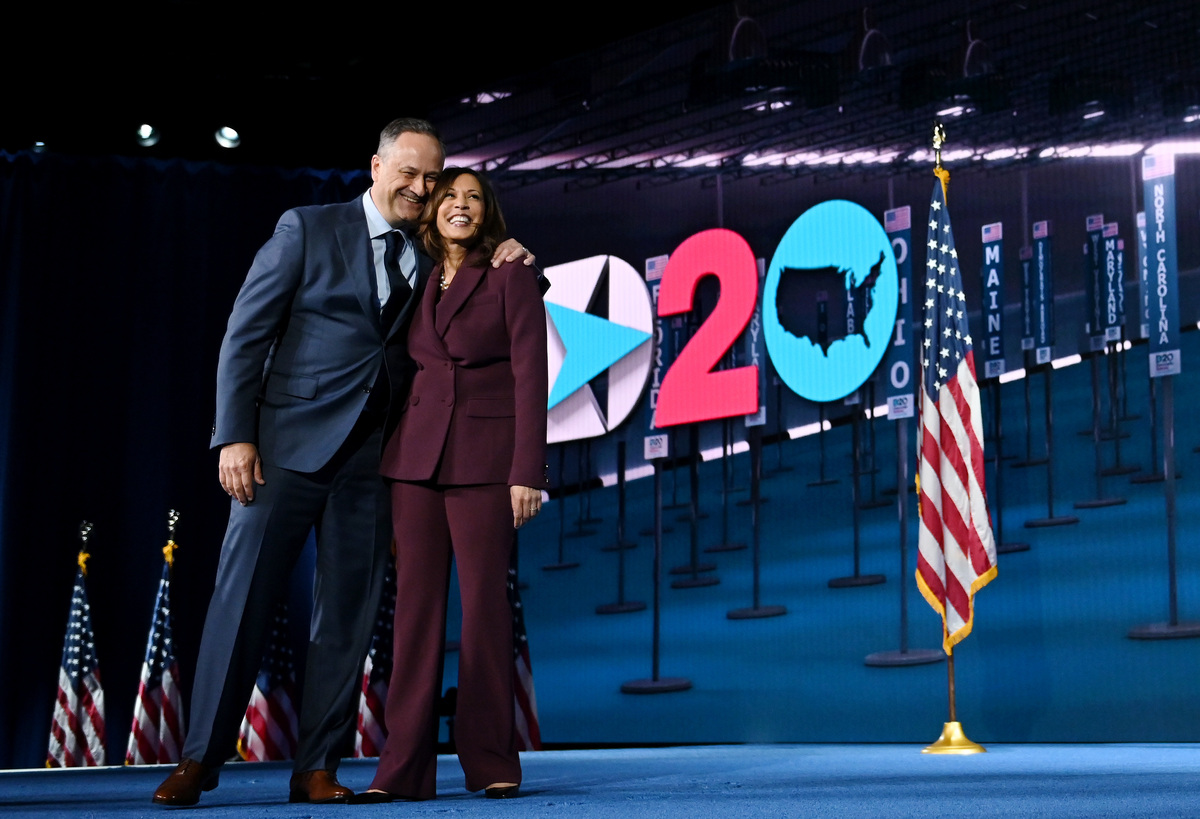 Chryl Laird, a Bowdoin College political scientist who studies Black political behavior, said that because cultural images of Black motherhood have been historically so negative, it is significant that Harris has chosen to center her family in this way. Harris, who is Black and South Asian, is a stepparent to two white children.

"The terminology is endearing. I think it speaks to a relationship and a bond that she has with her stepchildren. It is a nickname and a term that they use to describe her because they love her," said Laird. "For her to profile that as part of her politics, part of how she interacts, part of how she engages in her work is important."

Some multiracial families said they felt a different type of visibility, seeing an interracial marriage on the national stage as the country is growing more diverse.

Karen Melo Ticas is 41. Her husband, Walter Ticas, is an immigrant from El Salvador, and Melo Ticas' parents emigrated from Portugal. At home, they and Melo Ticas' stepdaughter (Walter's daughter) speak English, Spanish and Portuguese.

"At any given moment, right in the middle of a particular sentence, we'll switch in and out of different languages because we want my stepdaughter to learn the different languages and that it's perfectly normal to speak whatever language is predominant in the situation that she's in," she said.

She said that this is the first time she has seen a family that resembles hers in one of the country's highest positions.

"This is really our first opportunity to compare ourselves as a family to who is in the White House. It didn't happen this year with the Trump family, which does not look like mine," she said.

"It really feels to me like leadership is starting to look more like the nation," she added.

"They had a mom before me"

Many families, like Harris and Emhoff's, have wrestled with the question of how exactly they talk about the contours of their families.

"I never wanted to come into this house with the whole stigma of 'step,' " said Erin Padilla, who calls her husband's children her "bonus kids." She related to Jill Biden's journey.

In his 2007 memoir, Joe Biden described the role that Jill played in healing his family, writing that "I'm sort of used to being in charge, but in truth it was Jill and the boys who shaped the contours of our remade family."

"At first I wasn't even sure what to do with Neilia's pictures in the house, but Jill made that easy: When she embraced me and the boys, she embraced everything," Biden wrote.

After Joe Biden remarried, Jill gave birth to their daughter, Ashley, in 1981.

Padilla, 57, had a daughter when she met her husband. He was raising two teenagers after his wife's death. Her daughter was 3 1/2 and her bonus kids were 14 and 17 when the couple married.

"My bonus daughter couldn't wait to have another mother because she lost her mom when she was young," said Padilla, who lives in Carlsbad, Calif. "But my bonus son, who was a little younger, he was angry and resentful that I was going to be in his life and that he lost his mother."

Coming together did not come without some bumps along the road, Padilla explained.

"It's big footprints that you're trying to step into. And you know, that person has left and will always be this wonderful memory, without any flaws," she said. "And here you are, this flawed human, trying to pick up the pieces and carry that out."

As her bonus kids have grown into adults, Padilla said, their relationships have matured into "very nice, lovely friendships."

"I will never be their mother, but they're my children," she said. "I love them as friends. And I honor and respect that they had a mom before me." 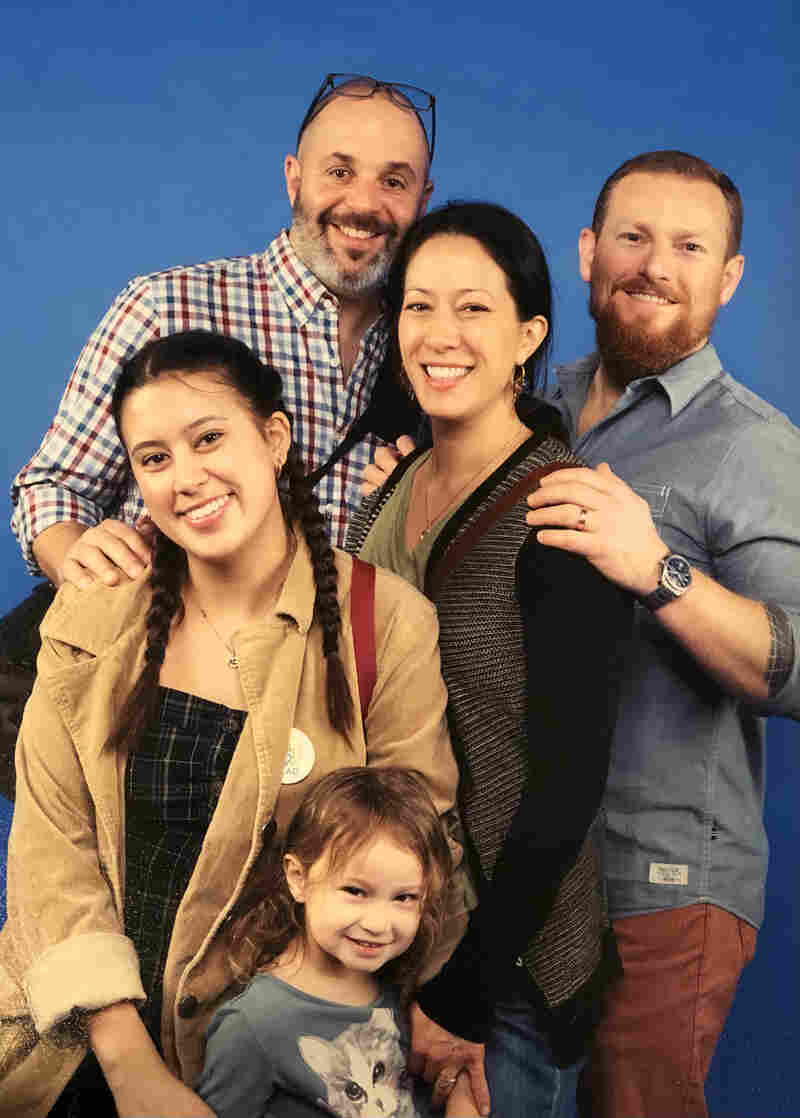 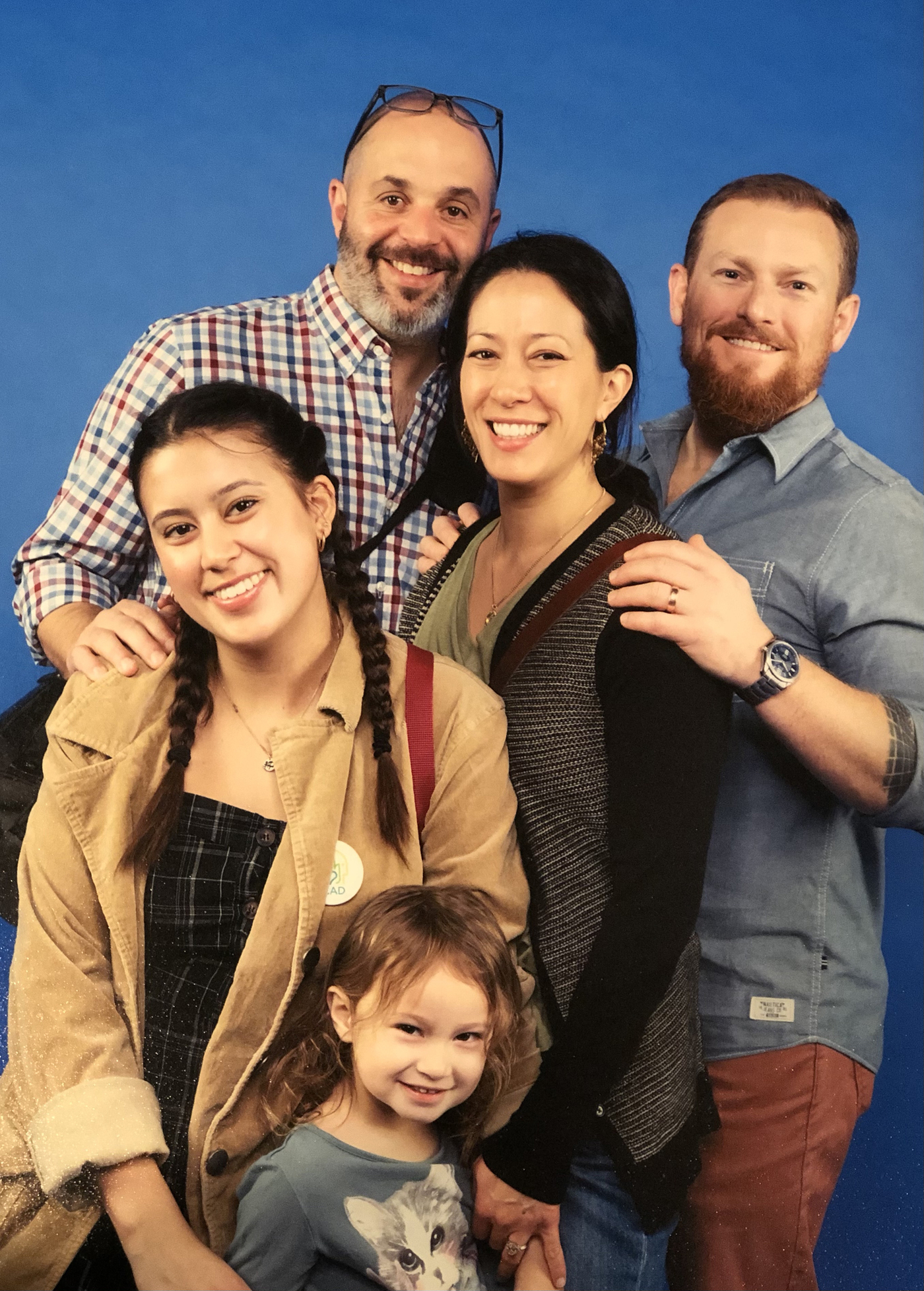 Jason Ware, 43, of Rockville, Md., sees no distinction between the daughter he gained by marriage, Gwen Deitz, and the 5-year-old daughter, Indigo Ware, whom he and his wife had together. They're both just his daughters.

Ware and his wife, Ana Ware, have the kind of relationship with their elder daughter's other father that Harris describes having with Cole and Ella's mother, Kerstin Emhoff. They became friends, and Harris has written, "We sometimes joke that our modern family is almost a little too functional."

Ware's family has stayed close to Gwen's father, who is also named Jason and lives about a mile from them. Jason Deitz comes over for dinner a few times a week.

"We definitely come to it from a democratic sense of the rules. I don't have a lesser vote because I'm a stepparent," he said.

They are so close that last Christmas, Jason and Ana Ware gave Deitz a letter that said if something were to happen to them, they'd want him to raise their daughter, Indie.

"I have such incredible faith in Jason," Ware said. "I want him to raise her as his own as well, because he's allowed me the space and the opportunity to raise his daughter as my own."

When he thinks about Harris and Emhoff, as well as the Bidens, Ware said it's refreshing to see families like his celebrated. Perhaps the visibility will mean some of the societal stigma will be shed and people will see families like his the way they see themselves: as just a normal family.

"It's normal, and it is healthy and it's good and it's celebrated," Ware said. "I do see that in the first family and the second family. There is not just a nuclear family anymore. It's families you love, and families you choose, and you consistently choose, day after day."