Accessibility links
Ethiopian Refugees From Tigray Flee To Sudan Last month, the Ethiopian government launched an offensive against a rebellious regional government. The ensuing conflict has killed hundreds, and almost 50,000 Ethiopians have crossed into Sudan. 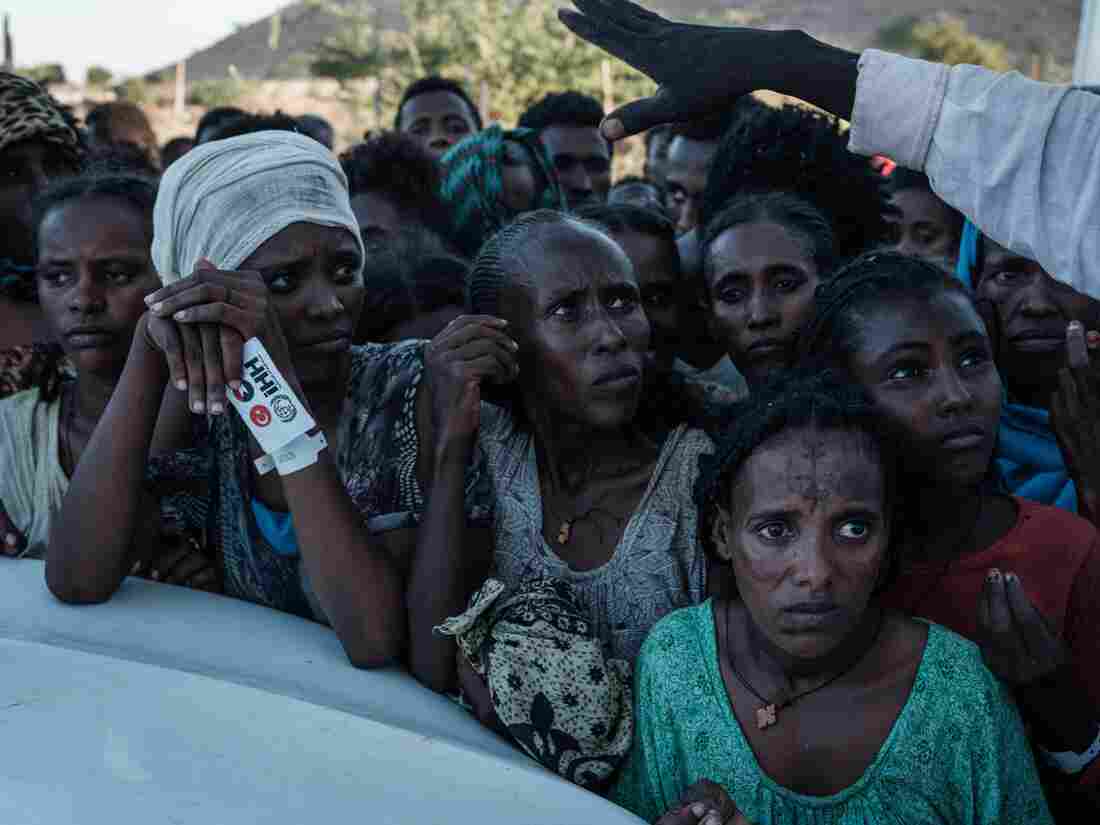 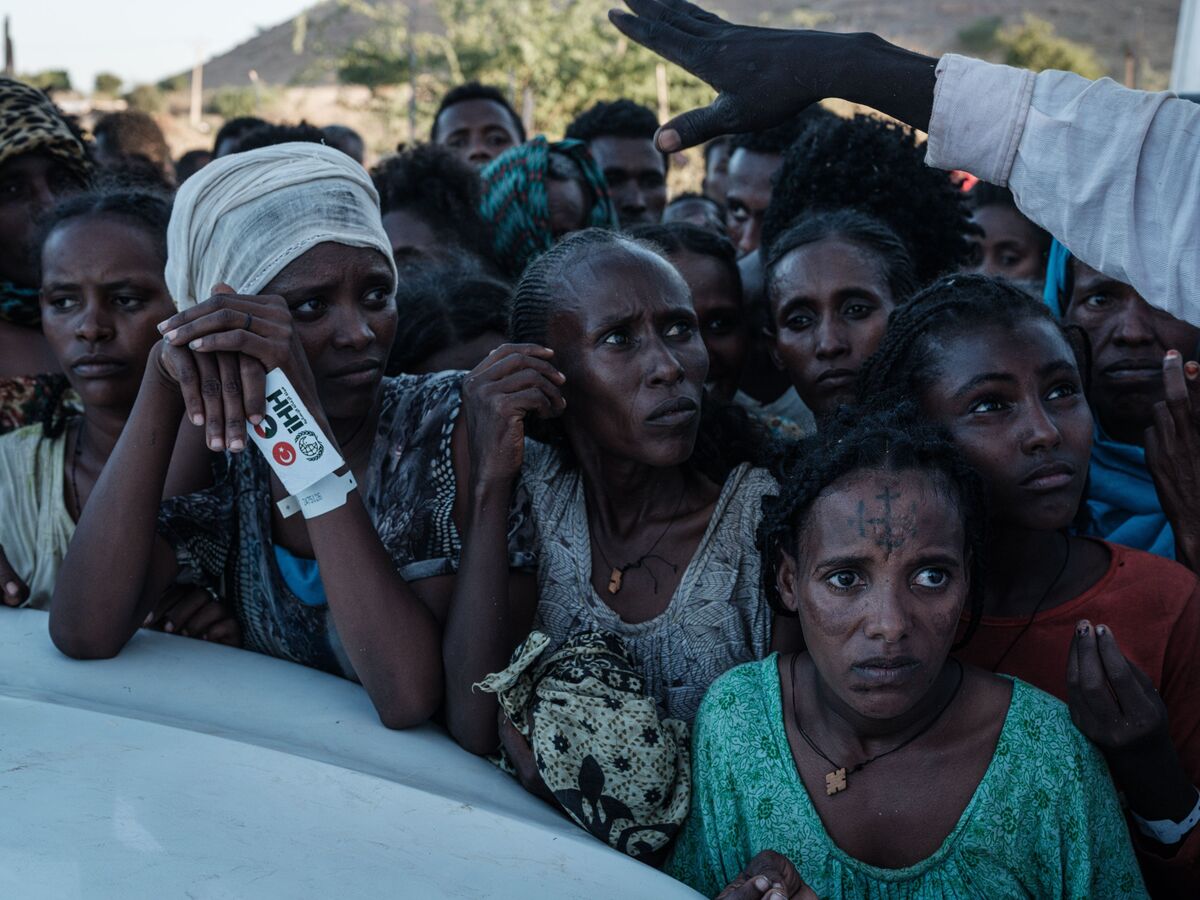 Ethiopians wait for food distribution in front of a warehouse at Um Raquba refugee camp in Gedaref, eastern Sudan, on Dec. 1.

The heat is unrelenting in the middle of a December day in eastern Sudan. It's hard to find any shade in this arid landscape. It's mostly dust and boulders — and, for now at least, it is the temporary home of tens of thousands of Ethiopian refugees who have crossed the border to flee the fighting in their country.

What To Know About Ethiopia's Tigray Conflict

There's not much to make a home. The nearest town, Al Qadarif, is two hours away. No water source exists at the camps, so water is trucked in from miles away through rugged roads. Refugees are sleeping in makeshift tents and in abandoned buildings. Some are even sleeping outside with no shelter.

Last month, the Ethiopian government launched a military offensive against a rebellious regional government. The ensuing conflict has killed hundreds, and almost 50,000 Ethiopians have crossed the country's northwestern border into Sudan. It's a refugee crisis that is straining the humanitarian infrastructure in the country. The United Nations refugee agency has appealed for $150 million to help cope with the situation. 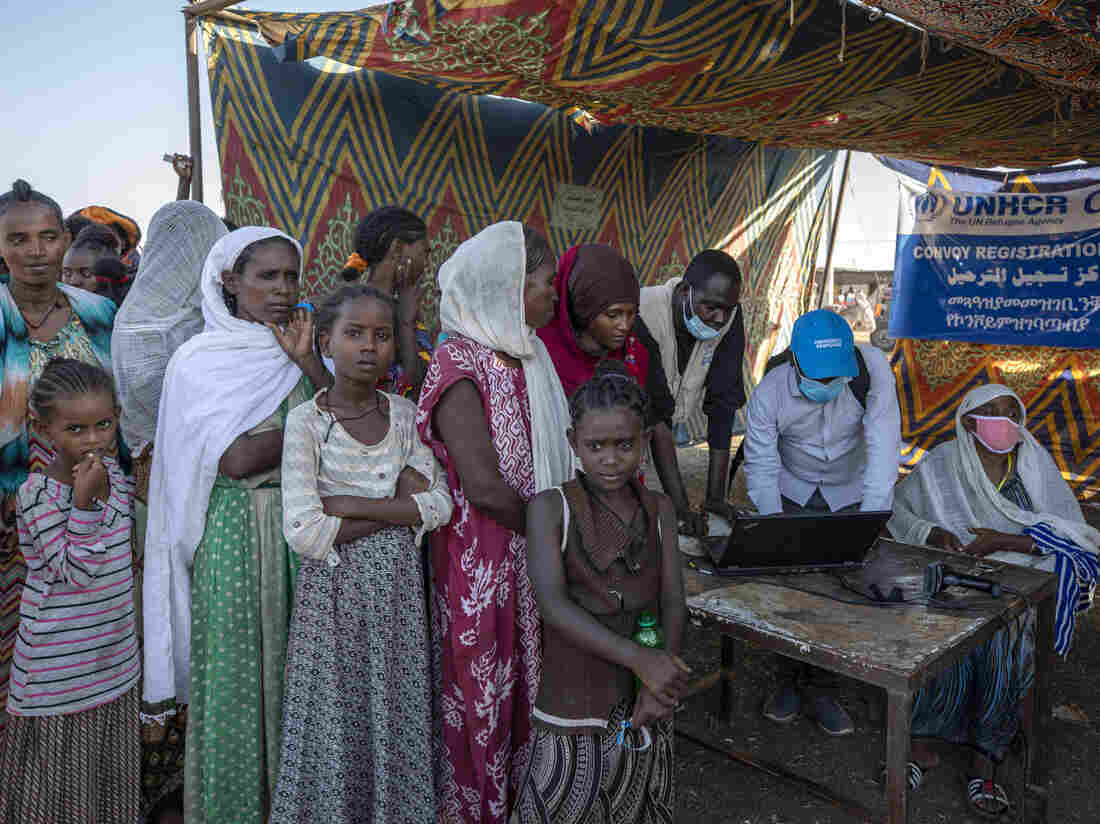 Refugees who fled a conflict in the Ethiopia's Tigray Region wait to register their names for a convoy to transfer them to Umm Rakouba refugee camp in eastern Sudan earlier this week. Nariman El-Mofty/AP hide caption 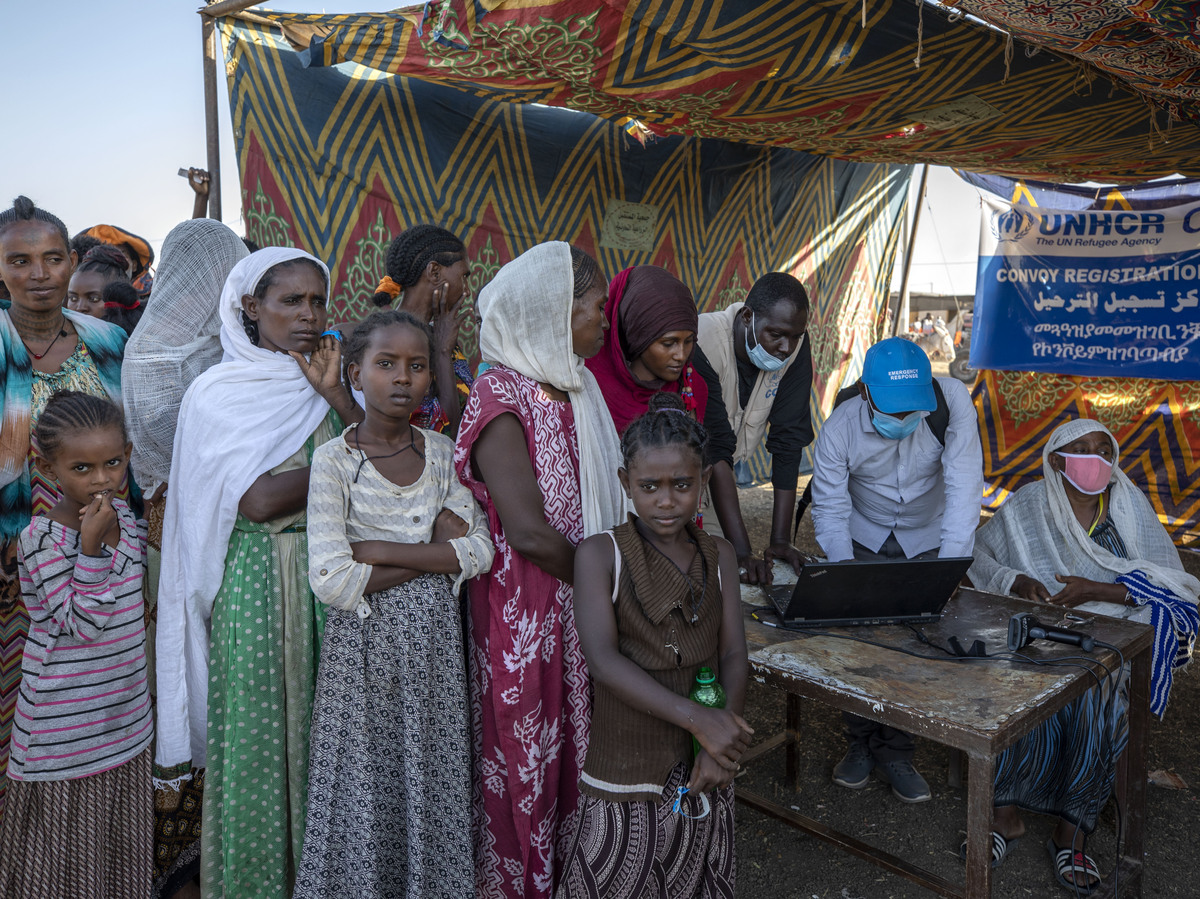 Refugees who fled a conflict in the Ethiopia's Tigray Region wait to register their names for a convoy to transfer them to Umm Rakouba refugee camp in eastern Sudan earlier this week.

At Village 8 Camp, Measho Fishale, 34, is trying to make a stew out of the sorghum that humanitarian groups have been handing out. It isn't really working. All she can do is stand above the stove in the sun, holding her toddler.

She has seven children, but when the fighting started in the town of Mai-Kadra in early November, her two oldest were not at home.

"[Militias] were slaughtering people with knives and machetes," she says.

Many other refugees describe the same scene: They say members of Fano, a youth militia loyal to the government, rampaged through Mai-Kadra killing ethnic Tigrayans. The government has repeatedly disputed that narrative, saying it was a youth militia affiliated with the Tigrayan rebels who killed ethnic Amharas, Ethiopia's second-biggest ethnic group.

NPR could not independently corroborate the refugees' claims, but dozens of them told the same story.

Measho says she had no choice but to run immediately. She has looked for the two children she left behind in Ethiopia, hoping they would have found their way to the camp, but she hasn't been able to find them.

Standing next to Measho is 55-year-old Kidan Berhe. She wanted to stay home, despite the war and didn't think she could make the arduous walk through the bush into Sudan. But then armed men swept through the town, and she thought about her children having to return to look for her. She worried they would be killed as well, so she left everything and walked for hours toward Sudan.

"This is all I have," she says, pointing to her clothes. Tears well up in her eyes and she presses her hands against her face.

"My gold. My clothes. I have lost everything," she tells NPR.

She says she now feels safe in Sudan but worries about her future and about the bleak living conditions at the camps. Humanitarian workers are struggling to keep up with the flow of refugees and to build up an infrastructure to accommodate them.

Nadir Ibrahim, a local humanitarian worker, says the refugees "need water; there are no latrines; they are doing open defecation." If this continues, he warns, disease will run rampant at these camps.

Refugees are doing what they can with whatever they can. They're building shelter out of grass. They are trying to make injera — the traditional Ethiopian bread usually made from a grain called teff — from the sorghum that is given out by aid agencies.

In Ethiopia, the situation appears more severe. The United Nations has said that refugees in the Tigray Region have received no aid since conflict started. The more than 96,000 Eritrean refugees in Tigray, who have fled war and repression in the past two decades, the U.N. says, have run out of food rations. The U.N. has received reports that refugees are leaving camps because of violence.

Ethiopia and the U.N. had reached an agreement giving aid groups access to the Tigray Region, but last week, the Ethiopian military shot at a U.N. convoy and the government warned it did not need a "babysitter." On Friday, the International Rescue Committee said one of its staff members had been killed at a camp in Tigray.

Ethiopia has said that the military operation in the country is over, because it has taken control of the Tigray Region capital, Mekelle. But the Tigray People's Liberation Front says it will not surrender to what it considers an invading army, and fighting has continued on many fronts.

The war is a power struggle between Ethiopia's new government and its old one; it's about what the Ethiopian political system will look like in the future. But in interviews with refugees, the war is about loss. Everyone, no matter which side they're on, is mourning. Some have lost loved ones; many others have lost homes. And every inch of the refugee camps in Sudan has become about grasping at some semblance of what they had before the war.

At the Um Rakuba camp, Fitsum Kidanemariam, 25, says he left his parents back in Ethiopia. He hasn't been able to call them, so he doesn't know their fate.

He's a slim young man and his voice breaks as he explains his situation. Back home, his love was art, but he had to work in construction because, like anywhere in the world, "there is no money in art," he says.

He walks past a huge tent filled with sacks of sorghum, past a little hut where women sell coffee. He enters what looked like an abandoned schoolhouse. It's just a shell now — most of the windows are broken; there are no doors; the paint is peeling. His friends play cards on the floor. On the windowsill, just behind them, he has lined up seven sculptures that he made out of rocks he found in the camp.

"The woman is forgiving and respectful," he says. "The lion, like warring men, will lash out at the slightest touch."

Fitsum sculpts every day. For hours, he meticulously carves rocks using a piece of steel he found at the camp. He's trying to forget the violence, hoping that his parents are still alive. He says he spent hours sculpting this rock, dreaming of a different life where humans were less like lions.