Accessibility links
Our Lady Of Guadalupe Celebrated In COVID Safe Way The Rev. Julio Martinez put a portrait of Our Lady of Guadalupe on the back of a pickup truck and celebrated the festival in the front yards of church members. 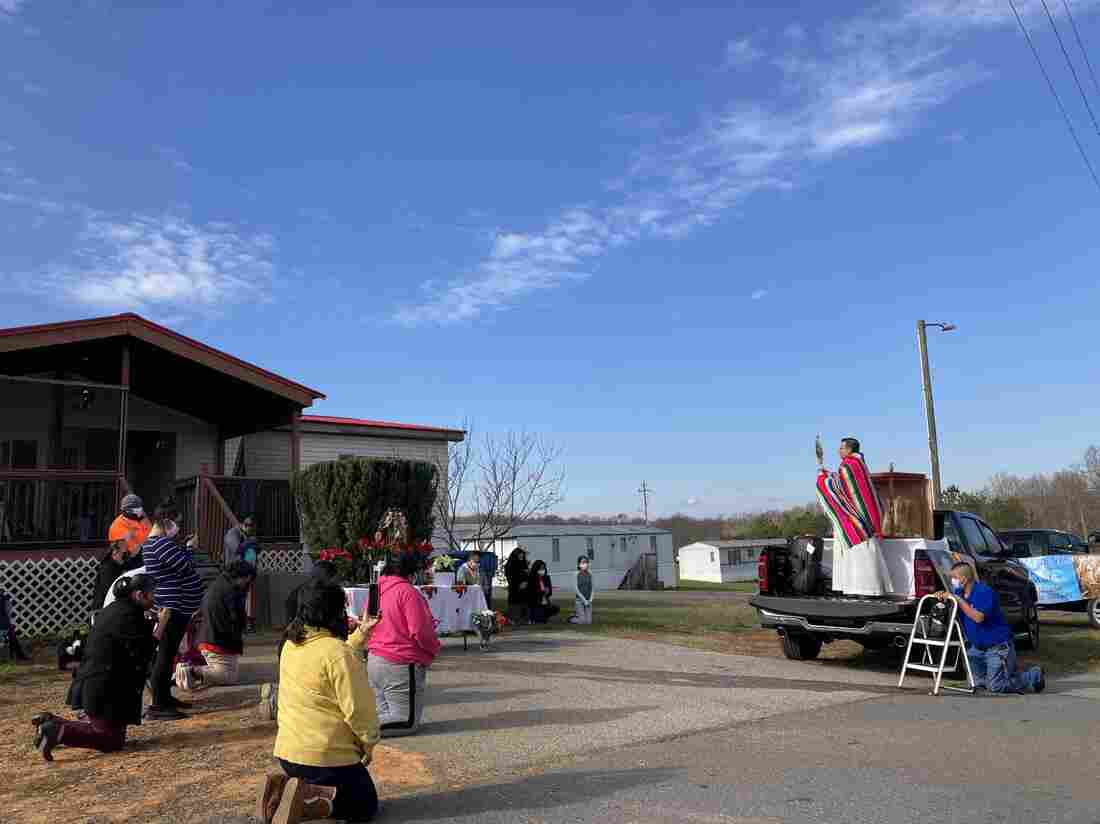 St. Julia Catholic Church adapted their celebration for Our Lady of Guadalupe to be COVID-19 safe. Emma Peaslee/NPR hide caption 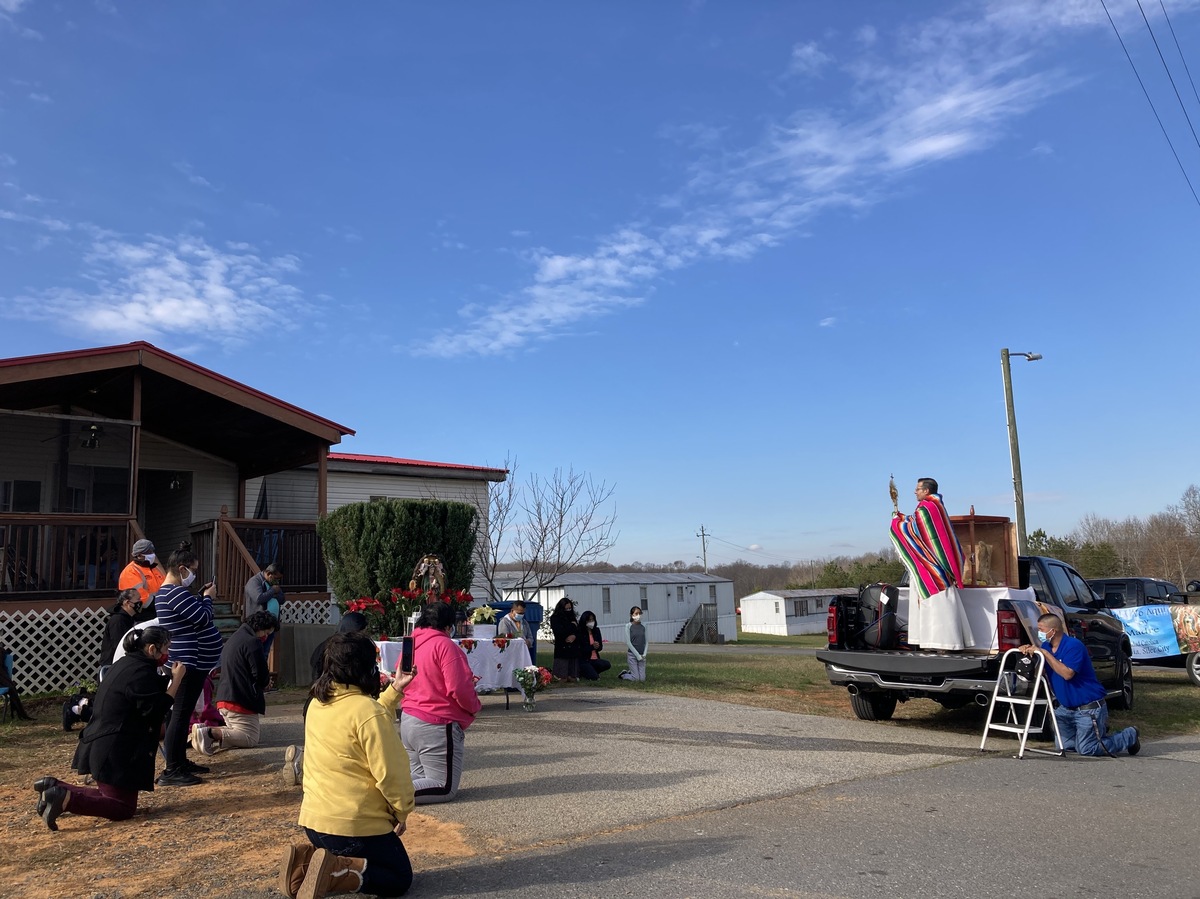 St. Julia Catholic Church adapted their celebration for Our Lady of Guadalupe to be COVID-19 safe.

But a church serving Mexican and other Latin American immigrants in Siler City, N.C., had a different solution.

The Rev. Julio Martinez put a portrait of Our Lady of Guadalupe on the back of a pickup truck and celebrated the festival on Saturday in the front yards of church members.

Our Lady of Guadalupe is the patron saint of Mexico and the holiday is hugely important to Catholics in that country as well as many Latinos in the United States.

In a typical year, Martinez's church, St. Julia, would open its doors before dawn. There would be mariachis and dancing and so many people and flowers that a path would have to be cleared so Martinez could reach the altar.

Daniela Herrera, 20, a member of St. Julia, says church leaders start planning the feast in the summer, but it quickly became clear they wouldn't be able to celebrate like normal. State restrictions limit church gatherings to 135 people, and Herrera says sometimes more than 500 people pass through the church for the holiday.

In Chatham County, where St. Julia is located, the pandemic has hit the Latino community especially hard. The Hispanic population accounts for nearly 50% of cases in the county, but make up only 12% of the community.

Ilana Duebster with the Hispanic Liaison, a nonprofit in Siler City that supports the growing Hispanic community, says it was important for the well-being of the community for the church to send a message of safety: "We are concerned for this. You should be concerned for this. Here's what we're doing to adapt and make it safe for everybody to be in community even though we're not going to be in close proximity with each other." 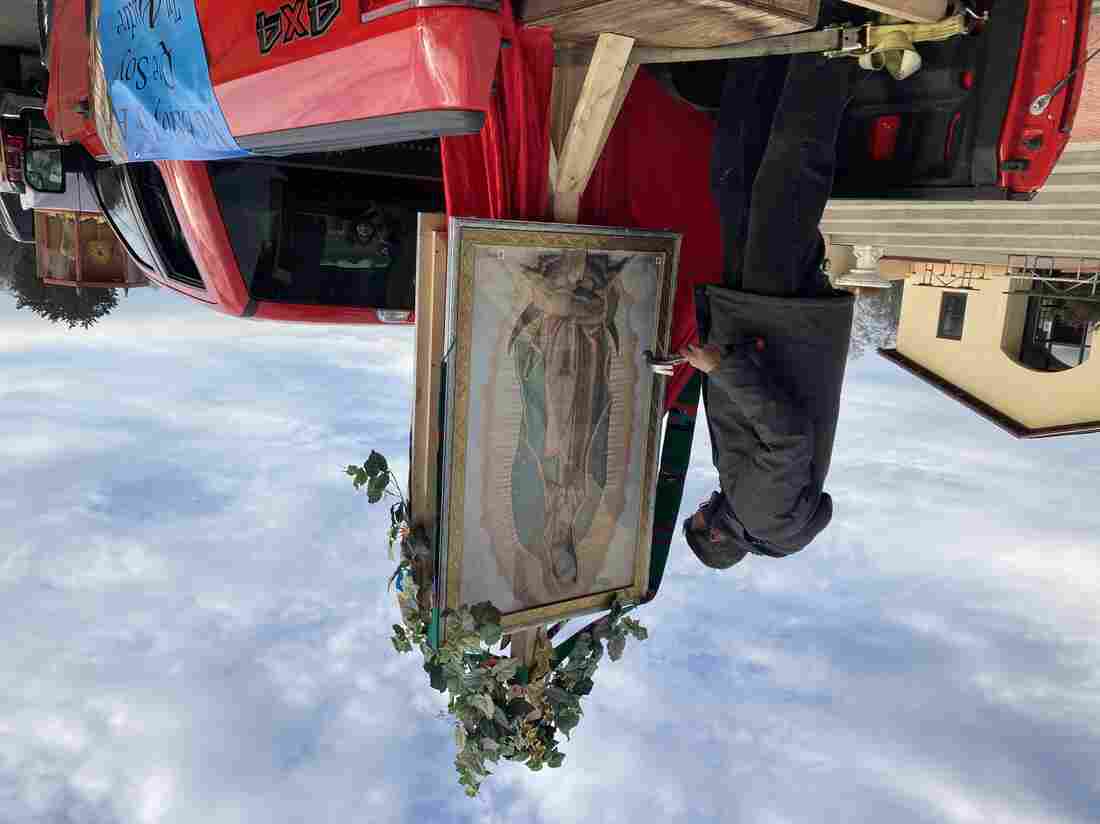 The Rev. Julio Martinez attaches decorations with a hammer to the portrait of Our Lady of Guadalupe mounted in the bed of the truck. Emma Peaslee/NPR hide caption 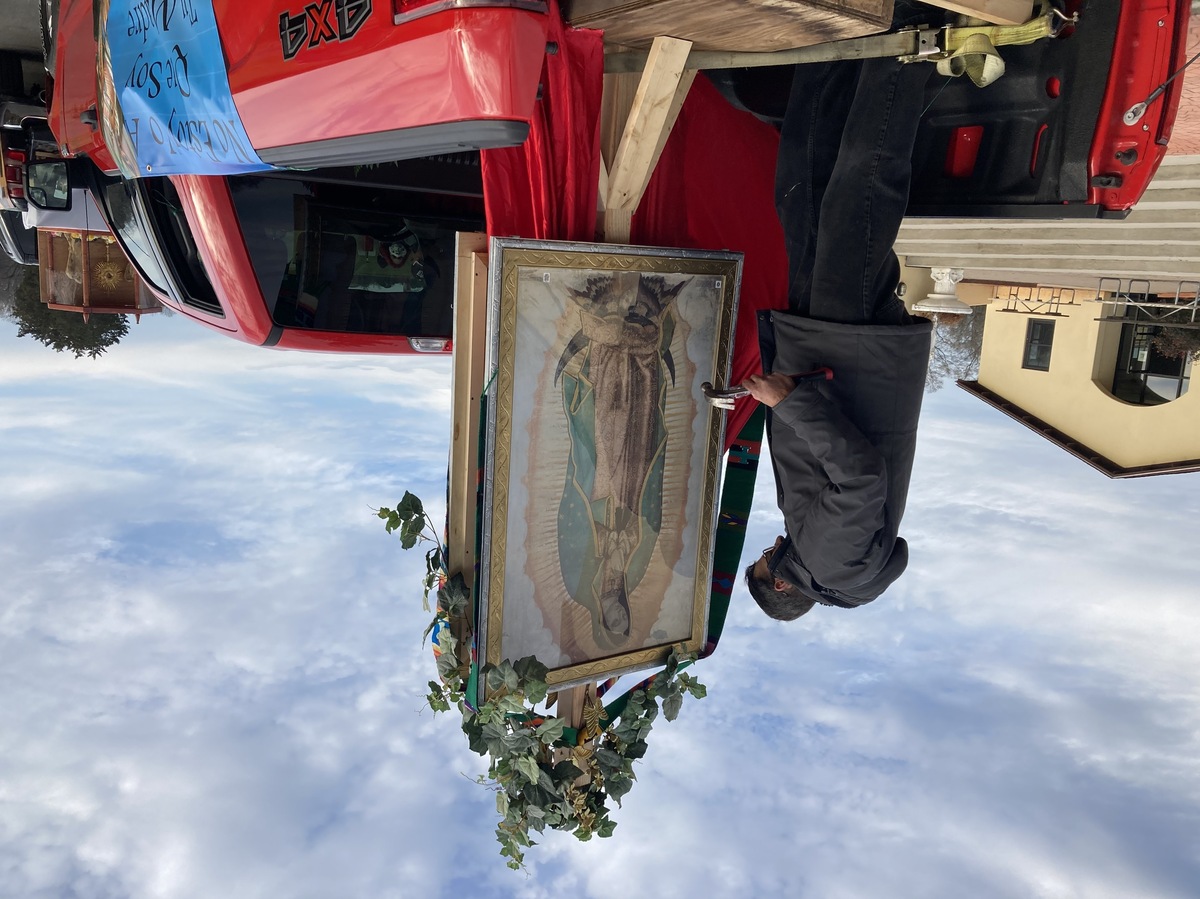 The Rev. Julio Martinez attaches decorations with a hammer to the portrait of Our Lady of Guadalupe mounted in the bed of the truck.

The day started early, in the parking lot of St. Julia. A few members of the congregation helped outfit three pickup trucks to create a church on wheels. There was a speaker system in one truck, a giant portrait of Our Lady of Guadalupe mounted in the back of another, and a third carried a golden cross known as the Blessed Sacrament.

They stopped at more than a dozen homes where they were greeted by worshipers who were all masked and socially distant. They prayed in driveways, front yards and a local park. Each outdoor space was decorated and had a shrine to the patron saint.

One of the stops was at the mobile home of Dulce Herrera, 56, who welcomed the caravan with a shrine of her own: a statue of Our Lady on a floral tablecloth and surrounded by flowers and lanterns.

Using a small footstool, Rev. Martinez climbed into the truck and began his service from the edge of Herrera's driveway, preaching from the bed of the pickup. He led around 20 people assembled in Herrera's front yard in a call and response honoring Our Lady of Guadalupe. He asked her to protect their families both here and back in their countries of origin. And they kneeled as Father Martinez brought out the Blessed Sacrament.

They don't leave anyone alive

When the priest finished his homily, Herrera offered a prayer of her own in front of those asembled: "Our mother, your tenderness and care gives us great faith."

She credits the saint with protecting her daughter and grandchild when they were recently robbed on the highway in Mexico.

"They attacked my daughter, and they took her van with everything," she said. "They didn't even leave the baby's daipers or milk bottle."

Herrera said it's clear Our Lady of Guadalupe saved them "because in that part of the country they don't leave anyone alive."

After the service, people crowded around Herrera as she ladled champurrado, a hot chocolate-like drink, into styrofoam cups. Tears formed in her eyes as she talked about how special it was to receive the Holy Mother at her home.

"It gives me such a great feeling of love to have received the Holy Mother at my home," she said.

Herrera had never missed a celebration of the Feast of Our Lady of Guadalupe, and even a pandemic wasn't able to change that.