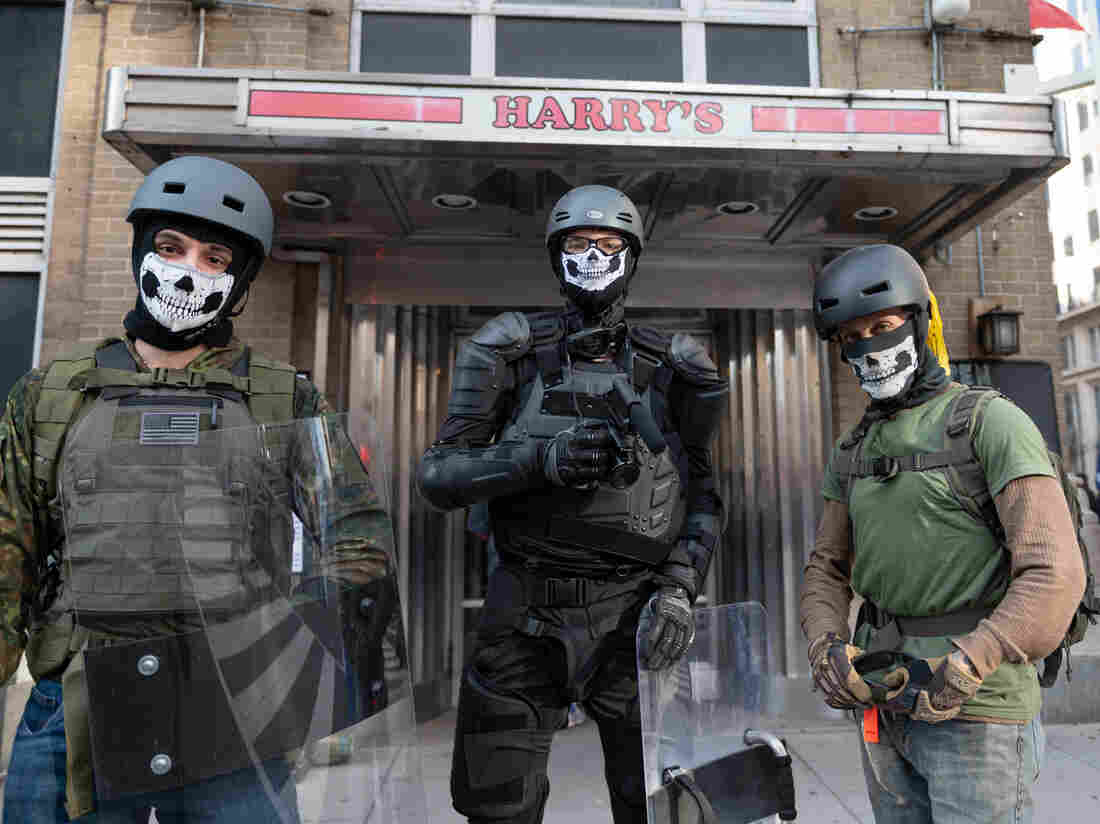 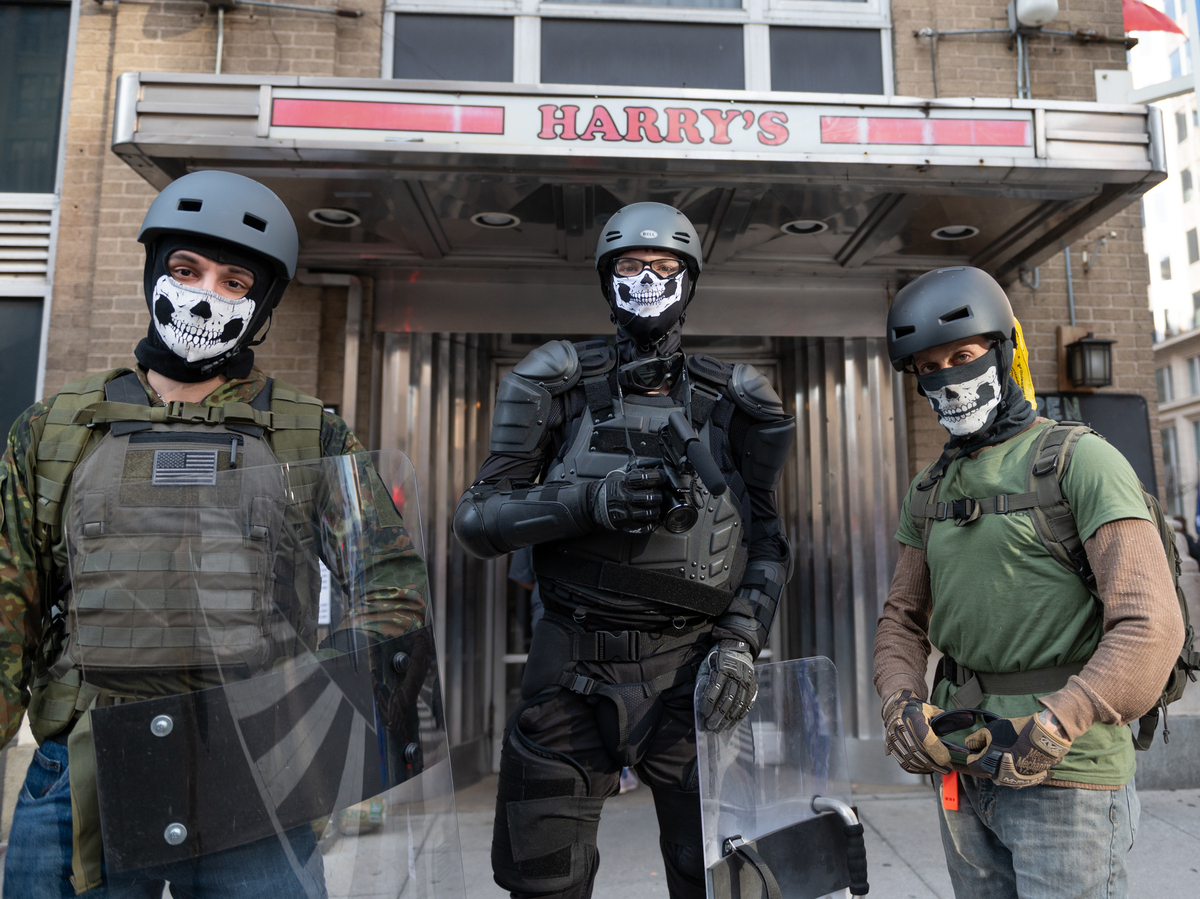 The Million MAGA March drew thousands of President Trump's supporters, including members of far-right groups such as the Proud Boys, Patriot Front and others, to Washington, D.C., last month.

The widespread embrace of conspiracy and disinformation amounts to a "mass radicalization" of Americans, and increases the risk of right-wing violence, veteran security officials and terrorism researchers warn.

At conferences, in op-eds and at agency meetings, domestic terrorism analysts are raising concern about the security implications of millions of conservatives buying into baseless right-wing claims. They say the line between mainstream and fringe is vanishing, with conspiracy-minded Republicans now marching alongside armed extremists at rallies across the country. Disparate factions on the right are coalescing into one side, analysts say, self-proclaimed "real Americans" who are cocooned in their own news outlets, their own social media networks and, ultimately, their own "truth."

"This tent that used to be sort of 'far-right extremists' has gotten a lot broader. To me, a former counterterrorism official, that's a radicalization process," said Mary McCord, a former federal prosecutor who oversaw terrorism cases and who's now a law professor at Georgetown University.

McCord was speaking at a recent online conference, Millions of Conversations, an organization aimed at reducing polarization. Along with McCord, several other former officials who served in senior national security roles said the mass embrace of bogus information poses a serious national security concern for the incoming Biden administration.

They added that there's no easy foil for a right-wing propaganda effort that amplifies fears and grievances on a nonstop loop. Those beliefs already have inspired political violence at protests over lockdowns and racial injustice. Political conspiracies drew thousands to last weekend's pro-Trump rally, after which the Proud Boys and other violent extremist groups wreaked havoc in downtown Washington, D.C.

"Breaking through that echo chamber is critical or else we'll see more violence," said Elizabeth Neumann, who in April resigned her post leading the Department of Homeland Security office that oversees responses to violent extremism.

While it's impossible to pin down the scope of such beliefs, analysts say, the numbers are staggering if even a fraction of President Trump's more than 74 million voters support bogus claims that say, for example, the election was rigged, the coronavirus is a hoax, and liberals are hatching a socialist takeover.

Traffic numbers for right-wing outlets and livestreams suggest the support extends well beyond the margins. Recent polls also signal the spread: One survey found that around 77% of Trump supporters believe that Joe Biden won the election as a result of fraud despite no evidence to support that claim.

At the online conference, participants characterized the shift as a mass radicalization. Neumann said the issue keeps her up at night worrying about where the country is heading. She talked about family members who've gone down the right-wing rabbit hole of disinformation. She said conversations with them require patience and negotiation, such as laying out her conditions for coronavirus safety protocols at family gatherings.

Neumann said it's hard to imagine what it would take to replicate those tough conversations on a national scale, given the power and reach of conservative media.

"I am wrestling with: How do I help people that have, unbeknownst to them, they've become radicalized in their thought? They hold views they didn't hold 10 years ago because all they listen to is that conservative infotainment," Neumann said. "Unless we help them break the deception, we cannot operate with 30% of the country holding the extreme views that they do."

Jason Dempsey, a military analyst and former Army officer on the panel, said too many people are turning to force as a response to fears over political divisions, whether through the military and law enforcement, or the formation of local armed groups. The election-rigging rhetoric only ups the ante as Democrats are painted no longer just as fellow citizens with different views but as enemies who must be vanquished.

"There are no easy answers, even if they're carrying guns and wearing body armor," Dempsey said. "We've got to get past that and be wary of the idea of militarism that doesn't lead to a common conception of service, but leads to the kind of tribalism where we have to protect ourselves and our families by force against those we disagree with."

On the conference call, the analysts agreed that the leftist fringe also is hardening and promoting its own conspiracies. But they said there's simply no equivalency with the right in terms of the volume of disinformation and conspiracy, or in its connections to violent acts.

"There is a monetization of outrage on both sides," Neumann said, "but in particular the conservative infotainment sector makes money off of that outrage."

On the topic of solutions, the panelists floated ideas about education, media literacy, trusted mediators. But they added there's little chance of progress until Trump, a superspreader of conspiracies and disinformation, is out of the White House.

"Leadership matters," said Kori Schake, who was a senior adviser in the State Department, Defense Department and the National Security Council. "It really matters that the president of the United States is an arsonist of radicalization. And it will really help when that is no longer the case."

The online conference wrapped up the way many such discussions do: without a clear solution, at least in the near-term. The same what-do-we-do conversations are happening in political circles, among researchers and at tech companies.

Nobody expects polarization – or its spinoff, radicalization – to go away when Trump is out of office. It's now a fixture of the American political landscape, part of an international trend toward right-wing populism, said Arie Kruglanski, a University of Maryland professor who's written extensively about radicalization. He said the erosion of trust in public institutions leaves ample room for disinformation to take root.

Kruglanski said revolutions and wars throughout history offer examples of how quickly extremism can go mainstream.

"Every large political movement started at one point as a small fringe minority," he said. "And when it catches on, it can engulf the whole society. So, you know, the danger is there."