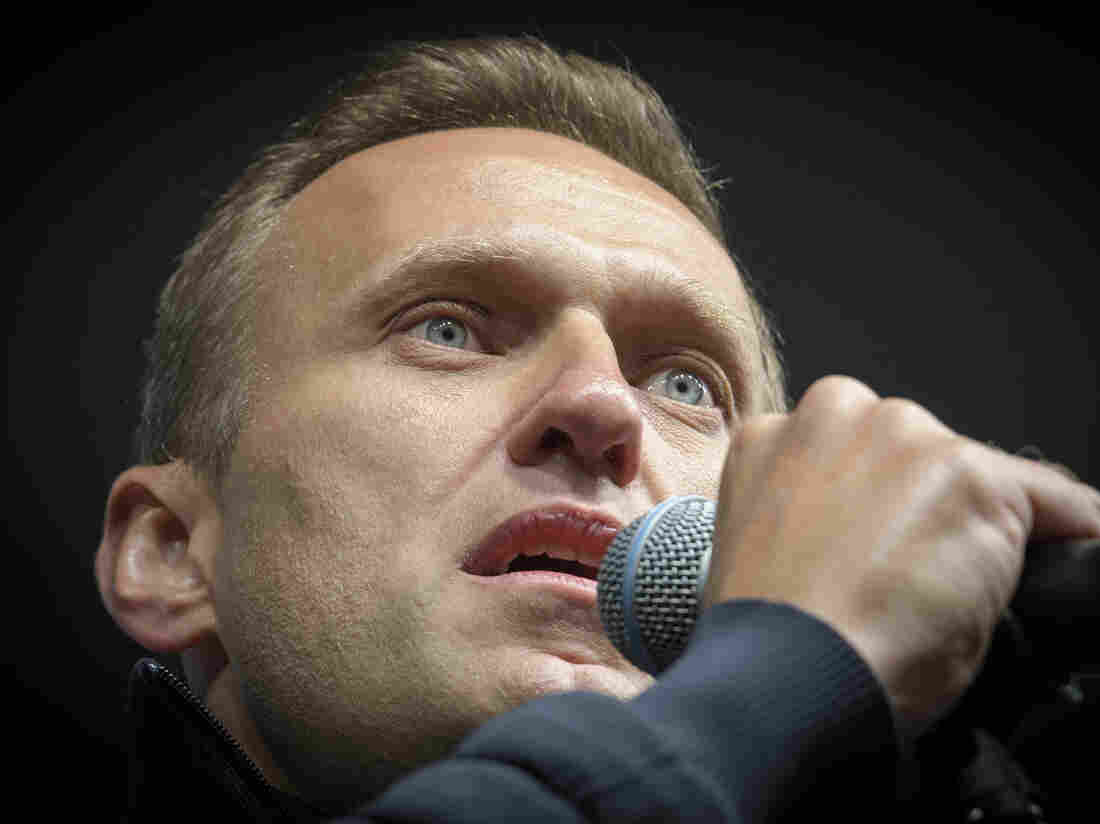 A joint investigation by Bellingcat and other media outlets found evidence that Russian opposition leader Alexei Navalny was trailed by Russian spy agents for years before he was poisoned in August. Yuri Kadobnov/AFP via Getty Images hide caption 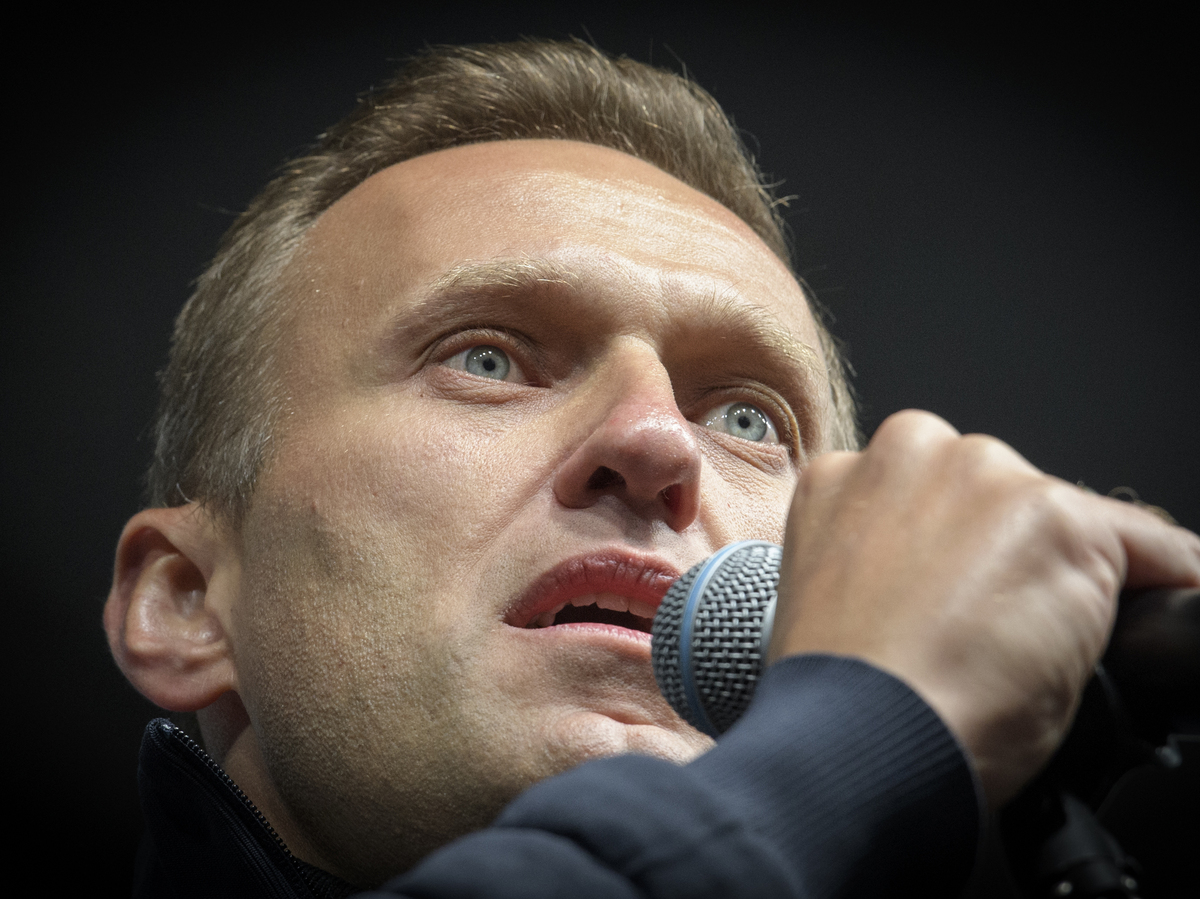 A joint investigation by Bellingcat and other media outlets found evidence that Russian opposition leader Alexei Navalny was trailed by Russian spy agents for years before he was poisoned in August.

Kremlin agents followed Russian opposition leader Alexei Navalny for years and were nearby just before an attack with a deadly nerve agent almost killed him in August, according to a new report by the research group Bellingcat.

The report, which used commercial flight information and phone metadata, suggests security agents and two medical doctors working for the nation's security agency were connected to the Navalny poisoning--an event that many have long suspected went to the top levels of the Russian government.

The report provides the strongest evidence to date supporting that theory and even names the agents Bellingcat says were connected to the surveillance of Navalny. The attack, which is believed to have involved the nerve agent Novichok, is not currently being investigated by law enforcement agencies in any country.

The groundbreaking report was put together by Bellingcat, CNN, Russian media outlet The Insider, and German weekly Der Spiegel.

On the day of the poisoning, Aug. 20, three officers from the FSB, Russia's principal security agency, followed Navalny on his trip to the Siberian city of Tomsk, according to the report. The agents were identified as Vladimir Panyaev, Alexey Alexandrov and Ivan Osipov. Alexandrov and Osipov are medical doctors and FSB operatives. They kept in contact with one another throughout the trip, with sudden peaks of communication just before the poisoning and when Navalny left his hotel and headed to the airport.

Hours later, Navalny collapsed aboard a flight back to Moscow. His plane diverted to Omsk for an emergency landing, where Navalny was brought to the local hospital and lapsed into a coma.

Navalny has repeatedly said he believes President Vladimir Putin personally ordered the attack on him, with the aim of eliminating a political rival. U.S. and European officials condemned the attack and blamed the Russian government, and in particular, the FSB.

"We're already used to the fact that the United States and other Western countries make new accusations against Russia in the media, be it about hackers or revelations about the double or even triple poisoning of Navalny," Lavrov said.

Bellingcat's report also uncovered what it says is proof that Russia has disguised its chemical weapons program behind a network of state-run organizations. Russia had, on paper, officially closed its military-run chemical weapons program in 2010. But scientists from the program were rehired --ostensibly for civilian research. Instead, they resumed their work on chemical agents for the nation's security services, the report says.

The day of the attack, doctors and other specialists flown in from Moscow claimed Navalny showed no sign of poisoning. That assertion was debunked when, two days later, Navalny was sent to a German hospital where doctors there diagnosed him with severe poisoning.

The sweeping report suggests a bad-tasting cocktail might have been used in the poisoning.

Navalny had ordered a Bloody Mary at his Tomsk hotel bar the night before he fell ill on the flight. The bartender said they didn't have the ingredients for the drink and suggested he have a Negroni instead. Navalny told Bellingcat investigators he couldn't take more than one sip as "the cocktail tasted like the most disgusting thing I've had in my life."

CNN's report indicates the poison could have also been added to the laundry he did at the hotel, put on a towel or pillow case he used, or injected into a shampoo bottle.

The poison that left Navalny in a coma for a month and fighting for his life was later identified as the nerve agent Novichok, which was developed solely by the the Soviet Union during the Cold War. It's the same agent used to poison former KGB spy Sergei Skripal and his daughter, Yulia, in 2018 in England. Both survived the attack.

Navalny, a vocal critic of Putin, announced in 2017 that he would try to run for president to unseat the Russian leader. Government surveillance of Navalny began that year, the report shows.

Operatives for the FSB followed Navalny during his trips across Russia on overlapping flights, some of which the agents booked under their own name.

Bellingcat said there is reason to believe there were early attempts on Navalny's life, including during a trip to Kaliningrad with his wife, Yuliya. She became seriously ill, but later recovered.

That trip was just a month before the near-fatal attack in Tomsk.