Accessibility links
Brexit Countdown: What To Know As Britain And The EU Fight Over Their Divorce As the New Year's Eve deadline approaches, the two sides are still trying to negotiate a deal to avert major economic and trade disruptions. Here are some of the top issues at play.

Brexit Countdown: What To Know As Britain And The EU Fight Over Their Divorce

Brexit Countdown: What To Know As Britain And The EU Fight Over Their Divorce 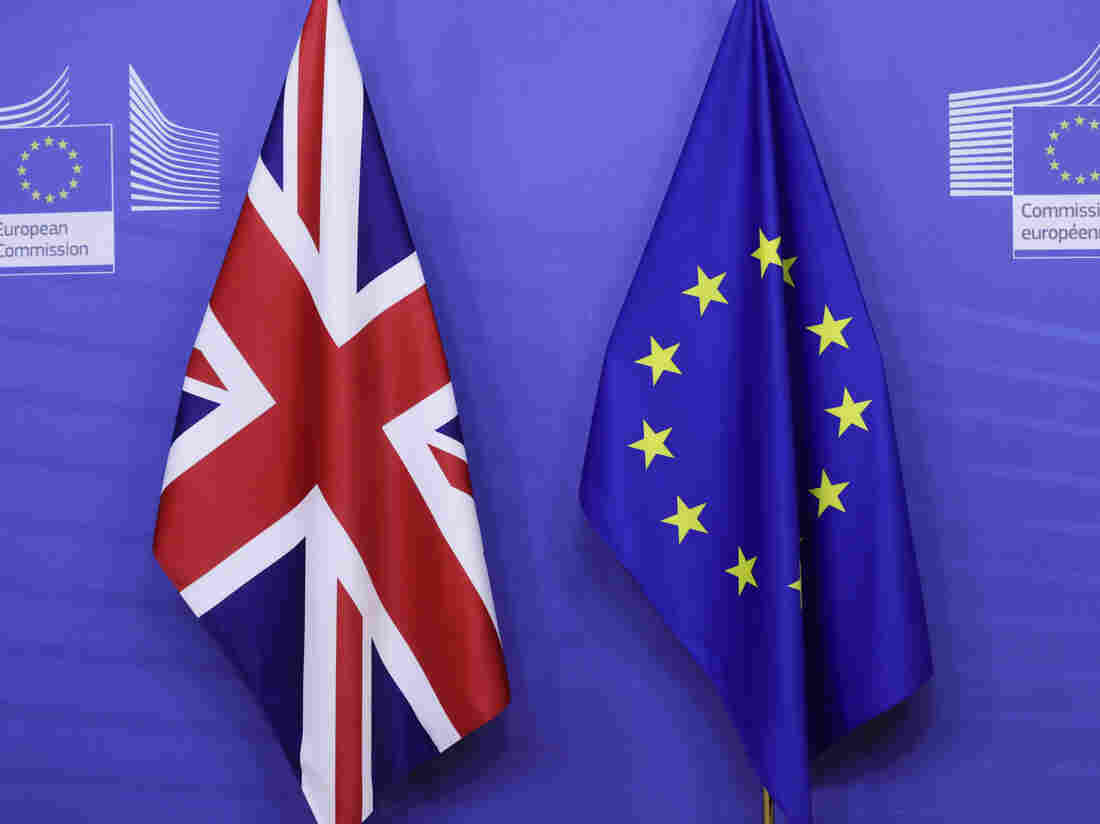 The United Kingdom and European Union flags are at the VIP entrance before the arrival of European Commission President Ursula von der Leyen and British Prime Minister Boris Johnson at EU headquarters in Brussels on Dec. 9. Olivier Hoslet/Pool/AP hide caption 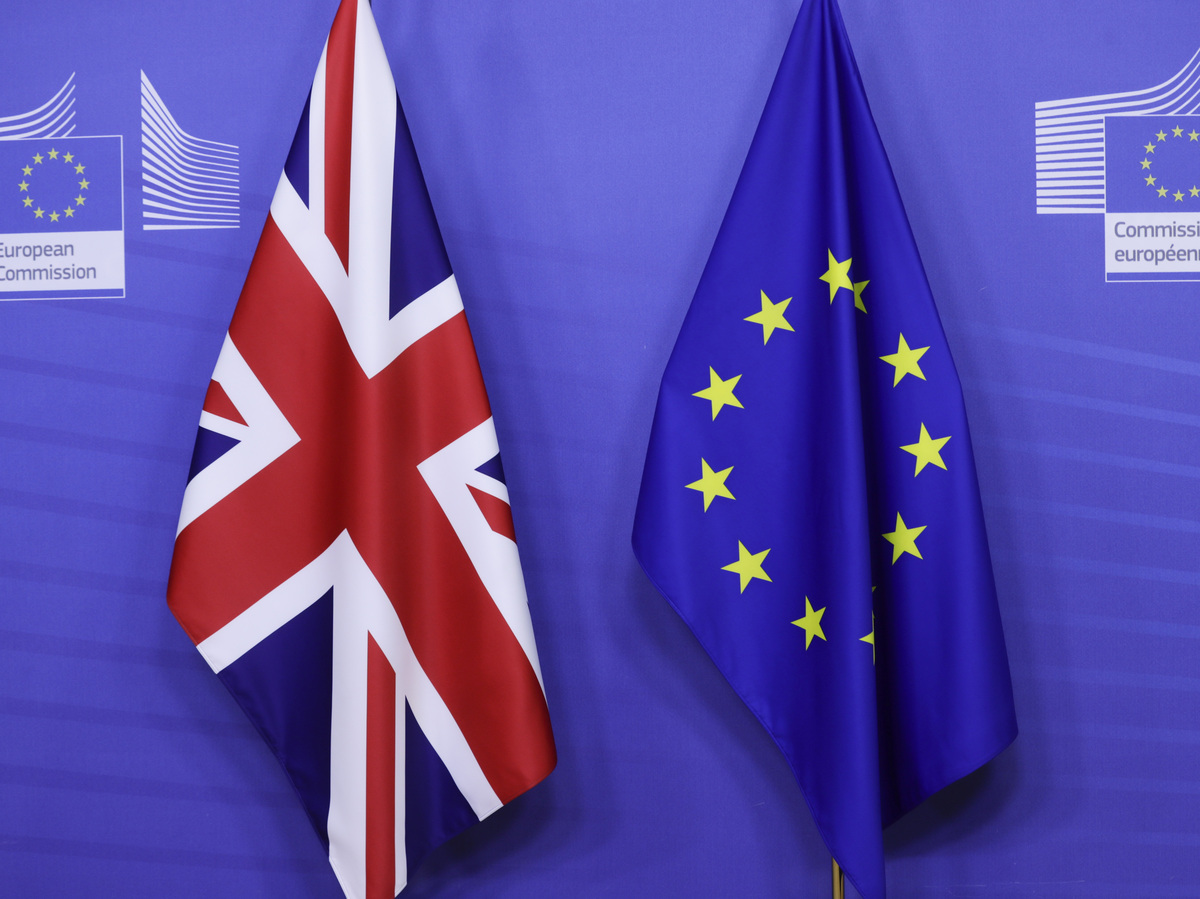 The United Kingdom and European Union flags are at the VIP entrance before the arrival of European Commission President Ursula von der Leyen and British Prime Minister Boris Johnson at EU headquarters in Brussels on Dec. 9.

Four and a half years after the landmark Brexit referendum, the United Kingdom is still arguing with the European Union about their future relationship.

Britain officially left the EU in January and has spent the last 11 months in a transitional phase while the two sides try to negotiate a new free trade agreement to avert major disruptions at borders and more economic damage.

The transition ends at midnight Brussels time on Dec. 31.

Here are some of the top issues still to be settled:

What is the latest?

The U.K. is leaving the EU while trying to maintain tariff-free and quota-free access to the massive European market of nearly 450 million consumers. Given that, the two sides are still divided over key issues.

For instance, how much access will European fleets continue to have to British fishing grounds? Fishing accounts for less than 1% of the British economy, but it has a powerful, symbolic value. The nation's fishing grounds also play an outsize role because they easily illustrate the Brexit pledge, "take back control."

Another issue in the current talks: How can the EU retaliate if the U.K. decides to depart from the bloc's regulations in a way that gives British businesses a competitive advantage?

Brexit deadlines have come and gone, but leaders of the main political groups in the European Parliament say they will not be able to ratify a deal unless they have it by midnight Sunday.

Despite the sticking points, European Commission President Ursula von der Leyen has voiced some cautious optimism. "I cannot tell you whether there will be a deal or not, but I can tell you that there is a path to an agreement," she said Wednesday. "The path may be very narrow, but it is there and it is therefore our responsibility to continue trying."

Why is this so difficult? Is this about something bigger?

It's about different values and different visions. The EU is a club in which members cede some national control in exchange for their people and businesses to access its massive single market. The European Union is also an idea: that 27 member states are better, stronger and safer together, because this economic interdependence is a deterrent to the kind of cataclysmic violence that devastated the Continent in two world wars. Brexiteers, on the other hand, believe in the centrality of the nation-state. They argue that the U.K. will ultimately be more prosperous and more successful when it is free from the regulations and bureaucracy of Brussels, where the EU is headquartered.

Why should Americans or anyone outside Europe care about this?

The EU has many flaws. Its critics see it as hopelessly bureaucratic and something of a gravy train of sinecures for Eurocrats. But it is also a pillar — along with NATO — of the post-World War II architecture that America played a major role in designing. The EU has largely helped keep the peace on the Continent and fostered shared prosperity through near-seamless trade. Weakening or breaking up the EU would be a gift to rivals such as Russian President Vladimir Putin.

How will U.K. travel, work and immigration change next year?

Brexit was won, in part, on the pledge to take back control of borders and immigration from the EU. Britons will still be able to travel visa-free to most EU countries for up to 90 days in any 180-day period next year, but in 2022, they will have to apply for visa waivers. British citizens who have already been living in the EU and EU citizens already residing in the U.K. have the right to remain. But immigration will become much more difficult after Brexit on both sides of the English Channel. For instance, EU citizens who want to work in the U.K. will have to apply through a skills-based points system that "aims to attract people who can contribute to the UK's economy."

What happens if the EU and the U.K. can't agree on a new trade deal?

The U.K. will begin trading under World Trade Organization rules, which means both sides will be free to slap tariffs on a variety of products the other produces. This would snarl trade at ports and raise transaction costs. The British government has warned of backups 7,000 trucks long at the Port of Dover. Tariffs are also expected to raise food prices in the U.K. by a small percentage. The head of the Society of Motor Manufacturers and Traders, the country's auto trade body, says a "no-deal" Brexit "would be nothing less than catastrophic for the automotive sector, its workers and their families and represent a stunning failure of statecraft."

What if there is a deal?

That would be a relief to most U.K. businesses as there would be less disruption. But there would still be customs checks for the first time in decades, which is expected to slow trade across the English Channel. And even a trade deal comes at a price. Economists estimate it will cost Britain 6.4% of growth in per capita income over the next decade.

Are the U.K. government and businesses ready for this fundamental change in the relationship?

"I'm so angry about the fact that everything is so last minute," said Sally Jones, who works for EY, the professional services firm, and helps companies prepare for Brexit. "The fact that we've got a situation where U.K. traders will not be able to first access the customs declaration systems until the 23rd of December is crazy."