Accessibility links
Boston Restaurants Struggle To Survive The Pandemic Instead of banning indoor dining due to COVID-19, Massachusetts is squeezing restaurants with ever-tightening restrictions. At Cornwall's Tavern, it becomes a question of whether to take a break. 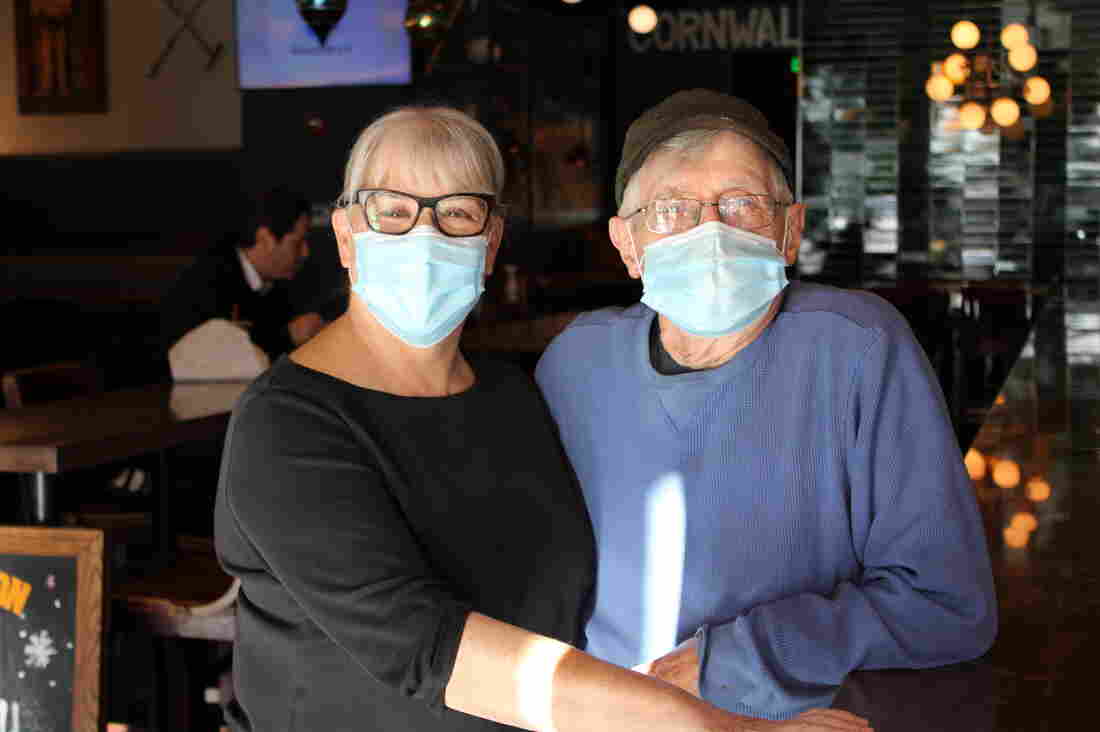 Cornwall's Tavern's owners Pam and John Beale are in survival mode. They're thinking a short-term pause in business, as COVID-19 infections surge, could allow them to reopen strong next year. Tovia Smith/NPR hide caption 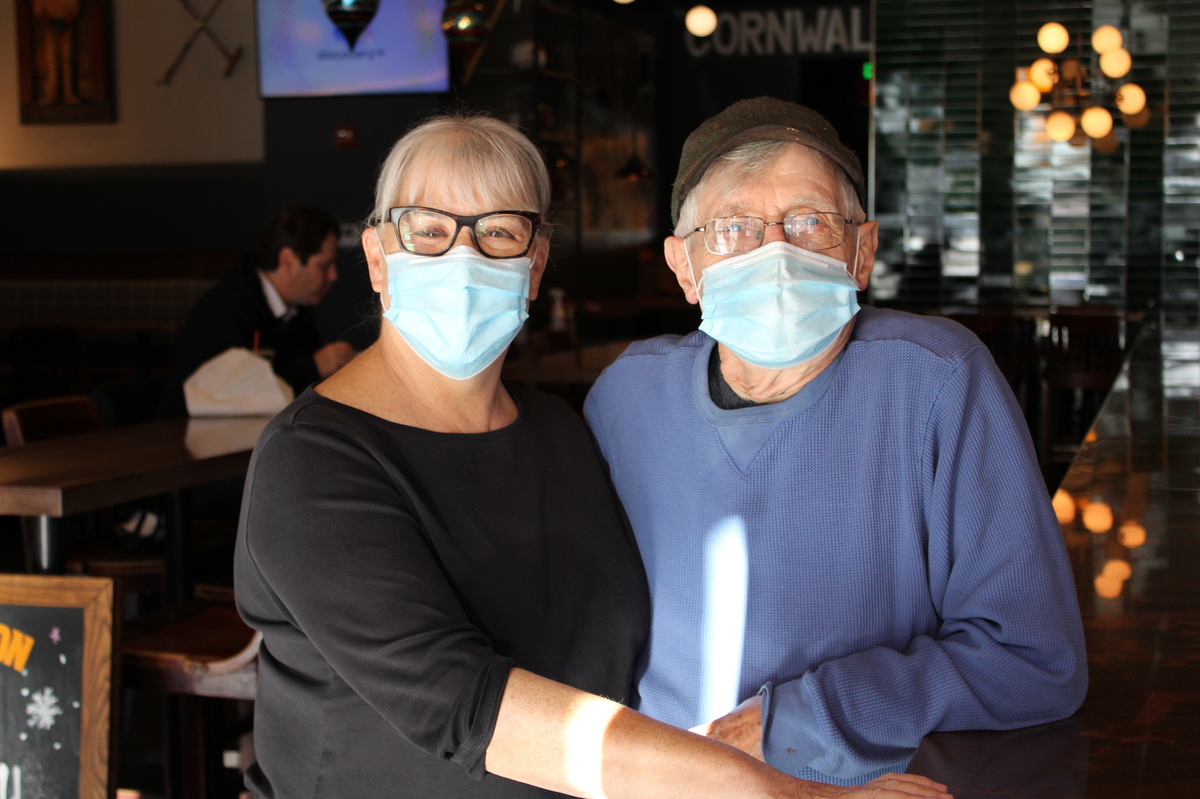 Cornwall's Tavern's owners Pam and John Beale are in survival mode. They're thinking a short-term pause in business, as COVID-19 infections surge, could allow them to reopen strong next year.

This time of year, Cornwall's Tavern in Boston would usually be booked with back-to-back Christmas parties and packed with college students celebrating the holidays.

Instead, John Beale, who owns the place with his wife, Pam, sits in the back, reading the newspaper, as Christmas music wafts down on the one lone customer having lunch. When a second customer shows up, John turns to welcome him, waving his arm at the empty space. "You can sit anywhere you want," John offers.

It's anything but a usual season.

"We did decorate a little bit, [and we] put wreaths out the front door so people would know we were open," Pam says. "But there's just not a lot of people around here and not a lot to celebrate at the moment."

As many as 1 in 4 restaurants in Massachusetts have gone out of business amid the pandemic, and the Massachusetts Restaurant Association says many more are likely as the current spike in COVID-19 cases prompts more restrictions on indoor dining. The economic casualties are even greater in Boston, which is bereft of commuters and out-of-towners and where Cornwall's is among the many trying to hang on through what's shaping up to be its toughest season yet.

The business has taken one hit after another. After straining for months with just half its seating, no bar and a strict curfew, Cornwall's sales were hovering around half what they used to be. When an even earlier curfew was imposed last month, sales nosedived even further. Then, just last week, the state tightened rules even more, dropping the restaurant to about a third of its normal business this time of year. 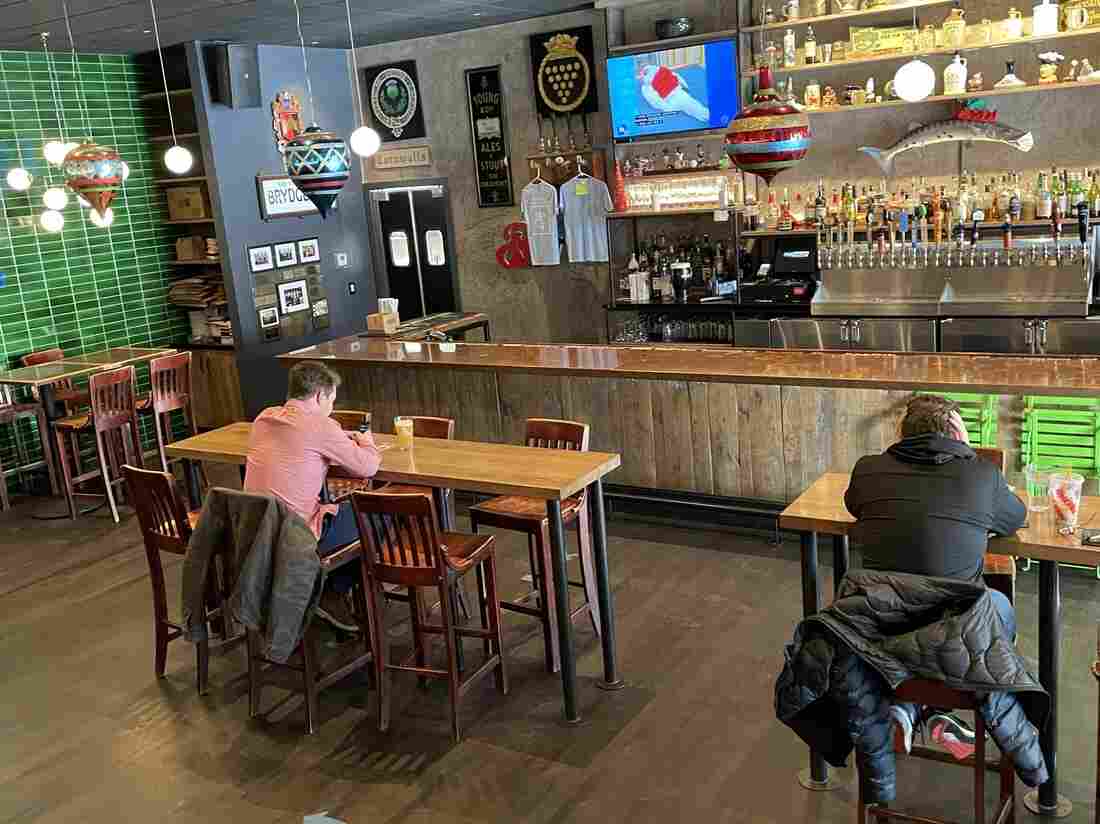 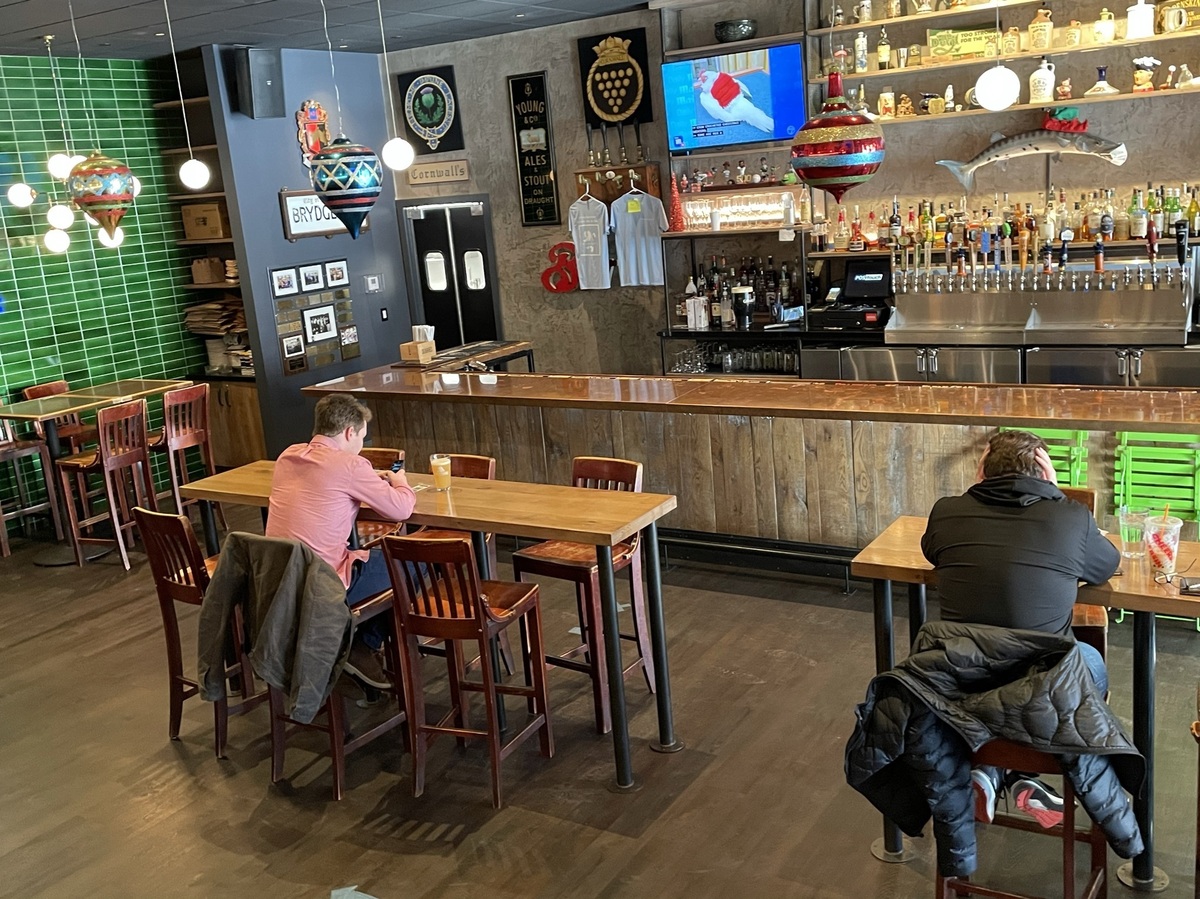 At Cornwall's Tavern in Boston, business slows as the pandemic surges, and Massachusetts imposes more rules and restrictions on indoor dining.

It's a constant worry

The latest order from the state limits tables to just six people — from the same household. Diners are not allowed to stay longer than 90 minutes, and they have to keep their masks on even while they're seated, flipping them up and down each time they take a sip or a bite.

"It's making it more awkward, more difficult and people are sort of chaffing against all the rules," Pam says. "But our fear is that there's more to come. You wonder what the next restrictions are going to be."

Many health experts say the state has not gone far enough. They're calling for an all-out ban on indoor dining, saying it's the only way to stop the spread of the virus indoors and curb the exponential growth in infections.

While Massachusetts restaurants are grateful to have dodged that bullet – at least so far, many are grudgingly coming to the conclusion themselves that they would be better off hibernating for the winter. They appear to be hoping to stop the bleeding in the short term, in order to survive the long term.

Cornwall's owners started considering shutting down for awhile last month, as COVID-19 cases surged, college students left town, and everyone else started hunkering down at home.

"People just disappeared," Pam says. "Everything is just sort of slipping away again, and you hope that you'll be able to go on. But it's a constant worry."

One of the biggest obstacles for restaurants is the curfew, which currently forces them to stop service at 9:30 p.m., tightened from the previous 11 p.m. curfew. Now, even when people do show up, they can't linger. 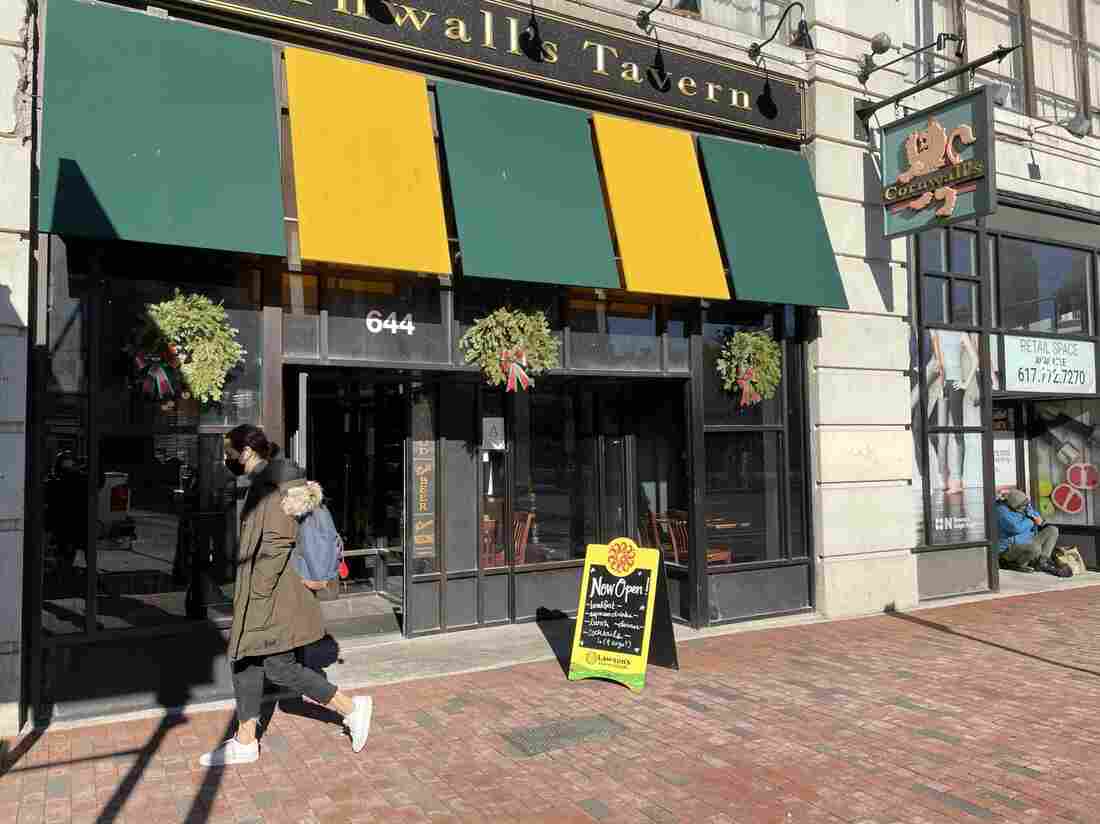 Cornwall's Tavern in Boston, Mass., would usually be bustling with holiday parties, but the restaurant is planning to close down temporarily, as COVID-19 cases surge and business plummets. Tovia Smith/NPR hide caption 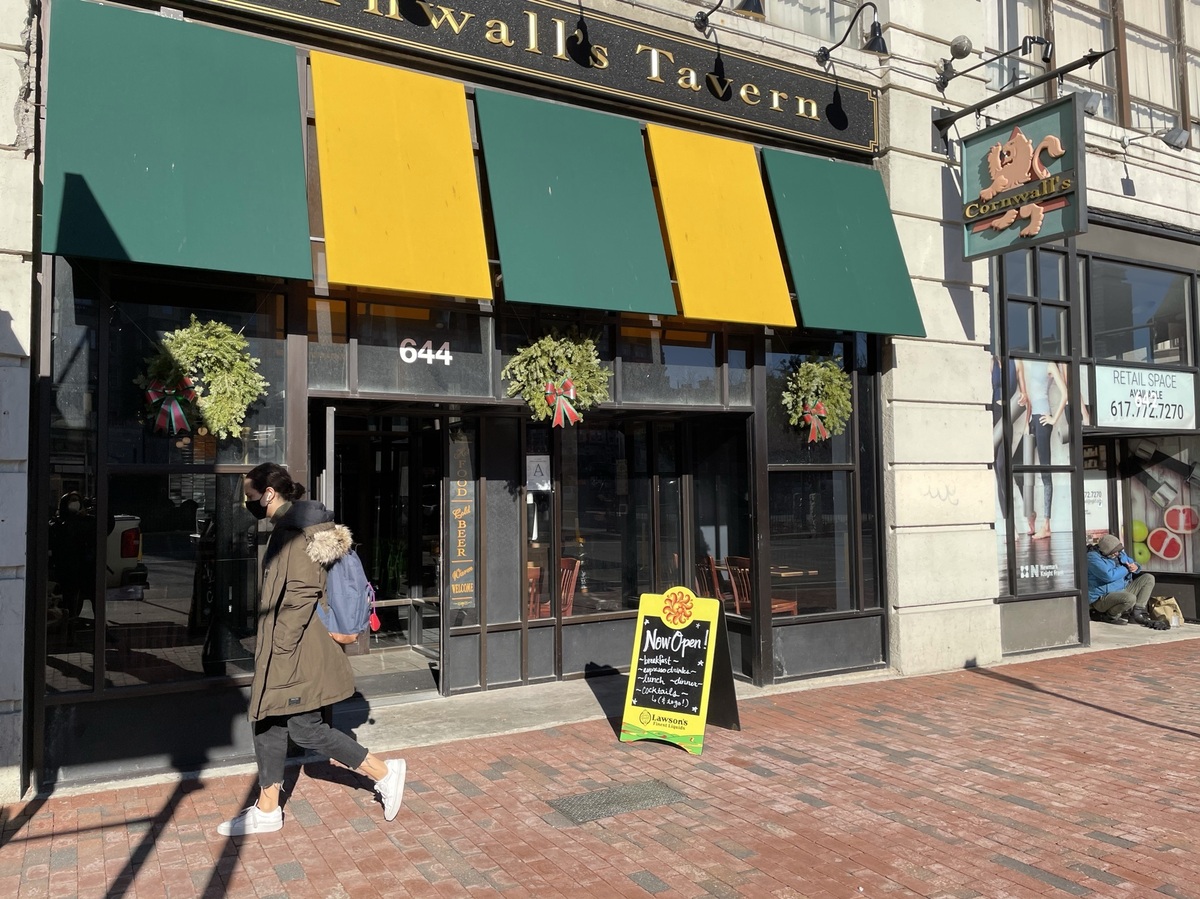 Cornwall's Tavern in Boston, Mass., would usually be bustling with holiday parties, but the restaurant is planning to close down temporarily, as COVID-19 cases surge and business plummets.

On a recent Thursday night, Billy Moran, Cornwall's general manager and bartender, is delighted to see a surprise flurry of students from nearby Boston University. The grad students have a tradition of coming in after their evening classes end around 9 p.m., and staying until after midnight. But this time, shortly after they arrive, who is Pam and John's nephew, starts circling the restaurant, announcing last call.

"We are closing down," he hollers over the chatter and music apologetically. "We have to."

He takes a last round of orders, and then reluctantly starts turning down the music and turning up the lights, and then begins pushing people out. The students, starved for in-person interaction, reluctantly oblige. It's a literal buzzkill. And Moran is just as frustrated.

"Closing early is a killer because those are by far the biggest revenue hours," Moran says. "You need the extended night so you can maximize [sales] in the limited seats that you have."

State officials defend the curfew as a delicate balance between public safety and the needs of small businesses. But critics say such "half-steps" may be compromising both.

Moran says it has brought Cornwall's to a breaking point.

"It's like if you want to close us, just close us," he says. "But don't keep taking away more and more. It's like 9:30 is tough to make it work. You need that extra time."

At a table near the bar, Ryan Brown and his friend, Clinton Terry, are feeling it, too. They almost didn't come in because of the curfew, Brown says, questioning whether it's worth it to "drive across town for one drink."

But they're also feeling it professionally. Terry is a restauranteur, and Brown works in restaurants and bars as a DJ. He calls the 9:30 p.m. curfew "arbitrary" and unfair. Crowded bars are one thing, Brown says, but properly-run restaurants should not be paying the price. With all their rules, precautions and built-in enforcement of social distancing, restaurants may actually be among the safer places for people to gather, Brown says, and the early curfew may do more harm than good. 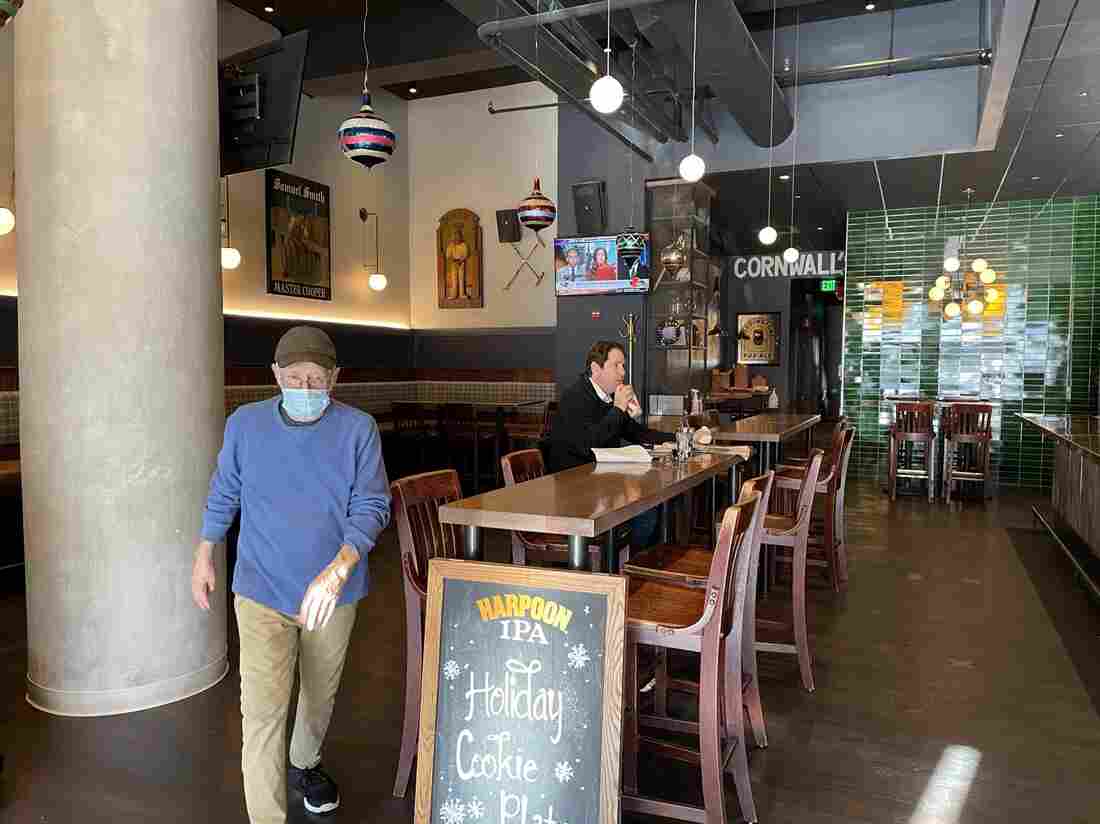 Cornwall's Tavern's co-owner John Beale says business has dropped to just about a third of what it usually is this time of year, not enough to keep even the restaurant's skeletal staff busy these days. Tovia Smith/NPR hide caption 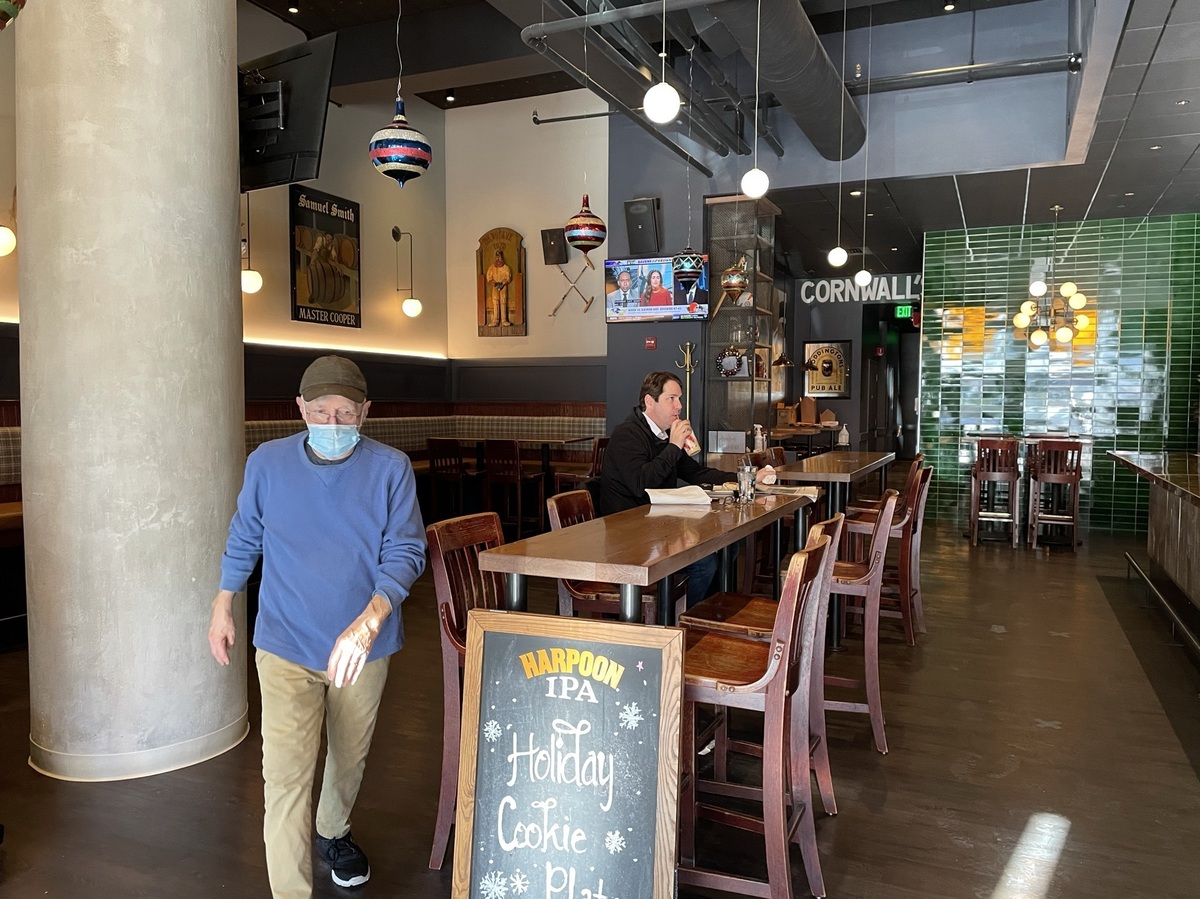 Cornwall's Tavern's co-owner John Beale says business has dropped to just about a third of what it usually is this time of year, not enough to keep even the restaurant's skeletal staff busy these days.

More of a nap than a hibernation

"I think in a way it has some of the opposite effect of pushing people into houses and house parties and whatnot," he says. "That's the part that's been frustrating."

Terry owns two restaurants in Massachusetts and was supposed to open a third last spring. Instead, it's sitting empty.

"I'm just worrying as to whether everything I've built, like everything I've worked for my entire life, is going to crumble," he sighs. "Like how do I employ my staff? What do I tell them? Like are we open? Are we not open? It's just, like terrible."

The Cornwall's crew tries not to dwell on the doomsday scenarios. At least not out loud. They're focused on survival.

But, as Christmas approaches, with infections still raging and the newest rules grinding down business even more, the family finally makes the hard call to close their doors for the worst of winter.

"It's going to be pretty much of a wasteland. It doesn't really pay to turn the lights the heat on, to get food in to let it go to waste while you have nobody to serve."

The tavern is set to turn off the lights this weekend.

Pam's hoping it's more of a "nap," than a "hibernation," and she hopes it'll go more smoothly than when the state abruptly ordered restaurants closed last March. This time, the Beales are planning ahead, strategically spending down their food and beer to minimize waste, and aiming to reopen, Pam says, by the end of January.

"I'm not a Pollyanna by any means," she sighs. "But fingers crossed the new year brings new hope."

It definitely won't be the first of the year, Pam says. The goalpost keeps moving. But, she says, Cornwall's will keep chasing it.