Accessibility links
Can Animals Recognize Their Own Reflection? : Short Wave The mirror self-recognition test has been around for decades. Only a few species have what it takes to recognize themselves, while others learn to use mirrors as tools. NPR science correspondent Nell Greenfieldboyce talks us through mirror self-recognition and why Maddie's dog is staring at her.

For more science reporting and stories, follow Nell on twitter @nell_sci_NPR. And, as always, email us at shortwave@npr.org. 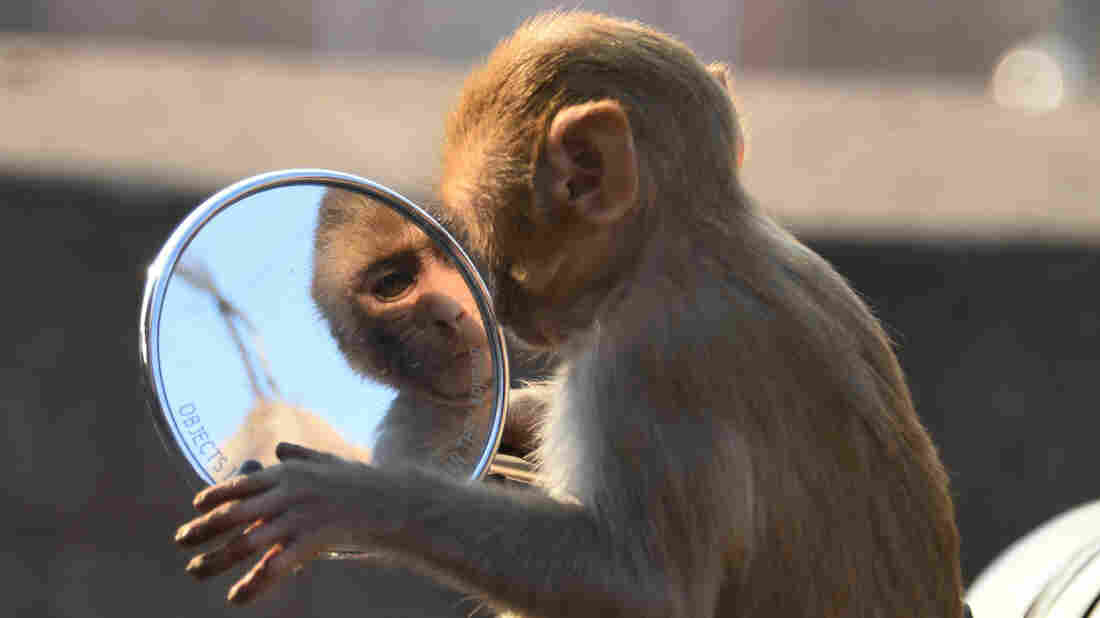 A macaques monkey looking into the mirror of a motorbike in the grounds of a temple in Jaipur in the Indian state of Rajasthan. Dominique Faget/AFP via Getty Images hide caption 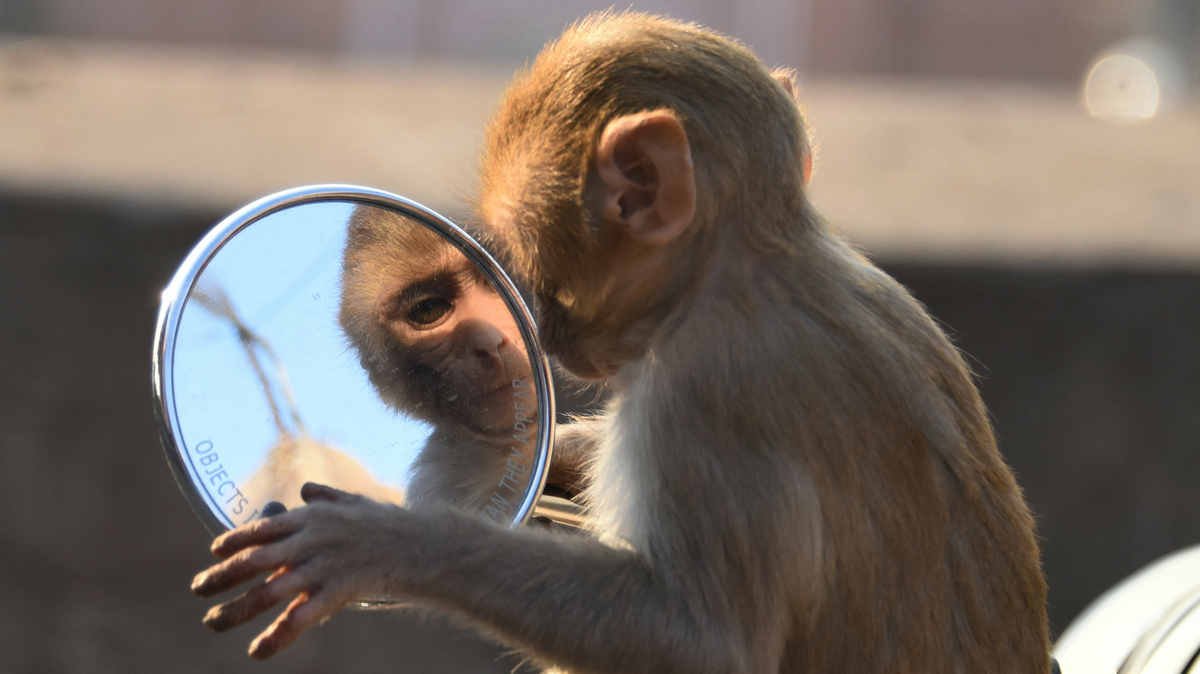 A macaques monkey looking into the mirror of a motorbike in the grounds of a temple in Jaipur in the Indian state of Rajasthan.

Daniel Povinelli was in high school when he first read about a clever experiment, published in 1970, that showed chimpanzees—but not monkeys--can recognize themselves in mirrors.

"I bought into the story of mirrors and self-recognition hook, line, and sinker," he recalls. "Because it is a compelling story."

All it took was a simple mirror, or so the story went, to reveal that our close chimpanzee relatives are self-aware, with the same kind of basic self-concept that humans have.

"The idea that there are other creatures out there for whom we can only access their mental states, their self-consciousness, through the trick of a mirror was somehow just deeply inviting," recalls Povinelli, now a scientist with the University of Louisiana at Lafayette.

He ended up devoting years of his life to studying mirrors and higher-order consciousness. As a result, he now has a much different view on what animals may be doing as they study their own reflections—but says after a half-century, the public seems stuck on the scientific tale that drew him in as a teenager.

"If I had a dollar for every time a reporter had called me over the last 30 years wanting to do a story about mirrors and chimps and monkeys and whatever," says Povinelli, "I would have a million dollars."

The famous mirror self-recognition test was dreamed up in the 1960's by Gordon Gallup, Jr., a scientist now with the State University of New York at Albany. Back then, he was a graduate student taking a course in psychology, and one of the class assignments was to come up with an idea for an experiment.

"And I found myself shaving in front of a mirror one day thinking about what I might propose," says Gallup. "It occurred to me, as I was shaving in front of the mirror, wouldn't it be interesting to see if other creatures, other animals, could recognize themselves in mirrors?"

Standing there shaving, still looking at the mirror, he realized that he could test an animal by secretly marking its face with some kind of non-irritating red dye, "to see if it could use the mirror to then access and investigate these strange red marks."

No such test had been done before, even though people had long observed animals interacting with mirrors. Most species tend to treat a mirror image as a stranger to be courted or attacked, says Gallup, who notes that "parakeets will literally interact with themselves in mirrors as though they were seeing another parakeet for their entire lives."

Some scientists suspected that primates, however, might do better. Even Charles Darwin once watched, fascinated, as a captive orangutan named Jenny made faces at a mirror.

My dog has been watching me. Using the mirrors. pic.twitter.com/CHBeq6d8JX

When Gallup was able to actually start doing experiments with chimps, a few years after he came up with his test, he found that the chimps initially acted as if the mirror image were another animal. But then, after a couple of days, their attitude shifted. The chimps began using the mirror to examine parts of their bodies like their teeth or genitals.

When Gallup anesthetized them and put red dye on their faces, the chimps later woke up and reacted to the unexpected mirror image as if they understood that the marks were on their own faces.

"What they did was to reach up and touch and examine the marks on their faces that could only be seen in the mirror," explains Gallup.

News of his findings caused a sensation. "It had quite an impact—much, much greater impact than I anticipated," Gallup says.

Over the decades, researchers have subsequently tried his mirror self-recognition experiment, or slight variations, in a slew of other species—everything from magpies to ants to manta rays.

Others, though, think the list is longer. Diana Reiss, a cognitive psychologist and marine mammal scientist at Hunter College, has tested both dolphins and elephants and believes that both show signs of recognizing themselves in mirrors.

In one experiment, her team made marks on dolphins' bodies. The animals could feel the marks being made but could not see them. "And the idea was, Would they race to the mirror afterwards and orient immediately to the place where they've been marked?" explains Reiss, indicating that doing so would indicate that dolphins could use the mirror as a tool to look at their bodies. "And that's exactly what we found."

She notes that animals typically move through a series of distinct behavioral stages when they first encounter a mirror. Initially, they may think the image is another animal, or they will examine the mirror by looking behind it or under it. After that stage, some animals start to test the mirror by doing repetitive and unusual behaviors.

"I think that's where the light bulb goes on," says Reiss. If animals realize that their body movements are linked to the movements in the mirror, they can then potentially move on to self-directed behavior, meaning they can start to use the mirror as a tool to examine themselves.

"That last stage is the evidence that they're showing mirror self-recognition," she says, and Gallup's mark test is a good way to confirm that. But in her view the self-directed behavior should be sufficient.

After all, some animals may just not care about an experimental mark enough to bother with it. Elephants probably worry less about body cleanliness than primates, given that they sometimes bathe in mud and don't generally groom with their trunks. So when an elephant sees a random mark on its head, it may simply find the mark too insignificant and uninteresting to investigate further.

On the other hand, Gallup worries that without a clear-cut experimental test, it's too easy for researchers to see whatever it is they want to see as they film an animal interacting with a mirror. "The problem with many of these videotapes, not only of dolphins, but a variety of other animals in front of mirrors," he says, "is that videotapes are kind of like Rorschach tests."

He believes that passing his mark test is strong evidence that an animal is self-aware—that it can become the object of its own attention. And, he says, this self-awareness was an evolutionary leap made only by humans and their close relatives, one that then led to empathy and higher-level thinking.

"Once you learn to recognize yourself in the mirror and become the object of your own experience, you're then in the position, at least in principle, to use your experience to make inferences about comparable experiences in other creatures," says Gallup.

But Povinelli, who was once so entranced with Gallup's mirror test that it made him devote much of his life to studying animal cognition, says that's reading way, way too much into this one lab test.

He believes the mirror test reveals that chimpanzees have some kind of self-concept, but not necessarily a grand psychological one. Perhaps, he says, they may have a more sophisticated sense of their own body's movement and how it relates to the movements in the mirror.

With that kind of physical self-concept, a chimp could use a mirror as a tool to examine or groom its body, he says, but that wouldn't indicate anything about the richness of the animal's inner life.

"With respect to the mirror test, the million-dollar question about it is always: What is the chimp thinking about when it interacts with its own mirror image?" Povinelli says.

After all, humans can have all kinds of complex thoughts about themselves as they brush their teeth or shave, he says, "but is that what's required? Do I have to think about any of that in order to brush my teeth in front of the mirror?"

And while it's true that monkeys, unlike chimps, can live with mirrors for years without spontaneously showing signs that they recognize their own reflections, recent research shows monkeys can actually learn to perform this feat, if they're given proper training.

He says people live with cats and dogs and other animals all the time and tend to project our own understanding of the world onto them, but we can't directly interview them to ask what they're experiencing.

"And so when a test comes along that is dressed up in scientific garb like a mirror and then a mark and we're in a scientific laboratory," Povinelli says, "we immediately want to point to this as confirmation of what we thought we knew all along."

This episode was edited by Gisele Grayson, produced by Thomas Lu, and fact-checked by Ariela Zebede. The audio engineer for this episode was Josh Newell.