Accessibility links
Supreme Court Punts In Census Case Over Undocumented Immigrants The opinion said the case was "riddled with contingencies and speculation" that impede judicial review. The president has sought to use a census count that does not include undocumented immigrants. 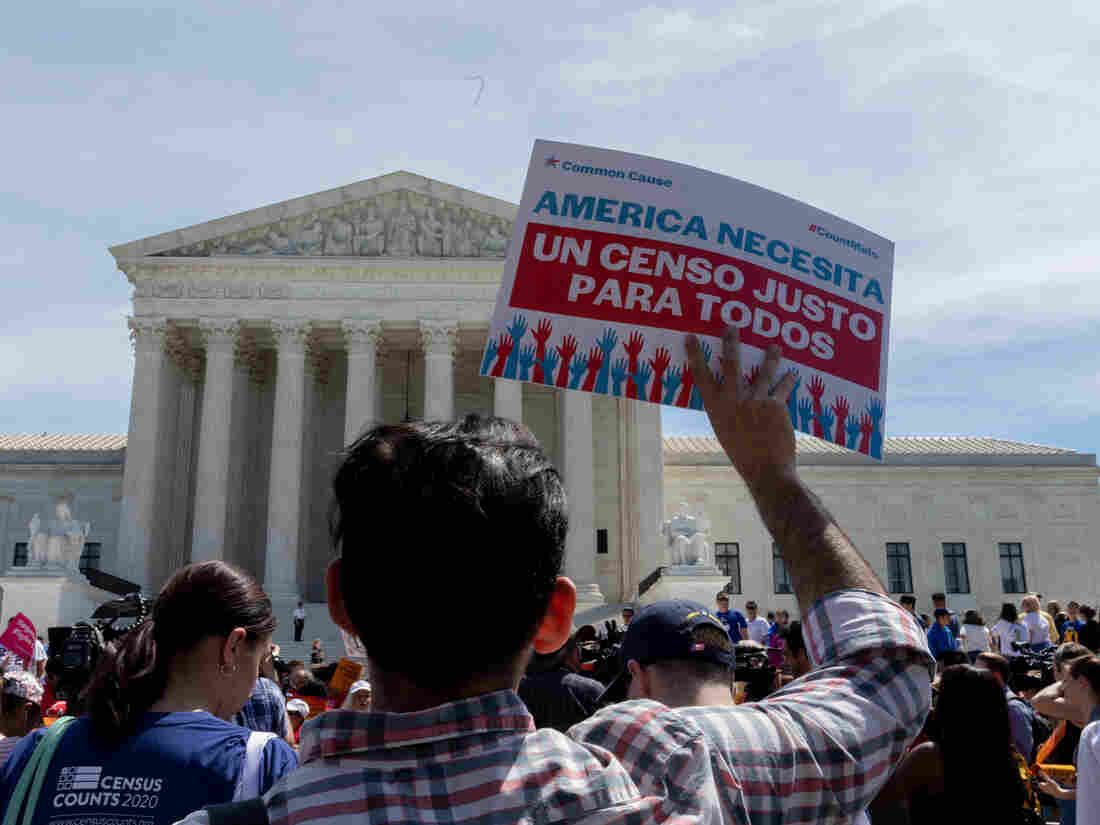 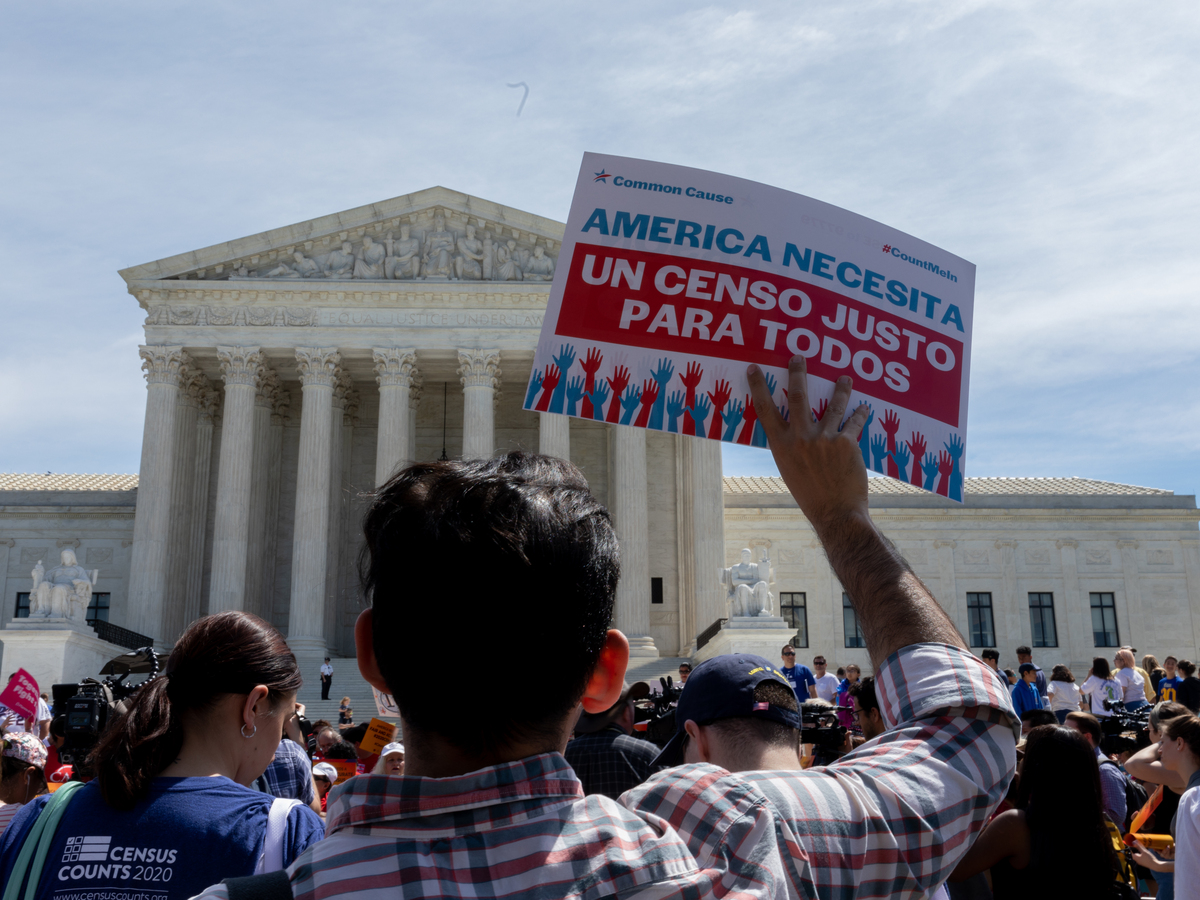 The U.S. Supreme Court ducked a direct ruling Friday on whether President Trump can exclude undocumented immigrants from a key census count.

At issue in the case was Trump's July memorandum ordering the U.S. Census Bureau for the first time to exclude undocumented immigrants from the decennial census for purposes of reapportionment. The count is used to determine how many seats each state gets in the House of Representatives and the Electoral College.

In an unsigned opinion, the court said it would be "premature" to rule on the case right now because it is "riddled with contingencies and speculation" and even the Trump administration doesn't know how many undocumented immigrants there are or where they live.

In fact, at oral arguments just 18 days ago, acting Solicitor General Jeffrey Wall, representing the Trump administration, told the justices that "career officials at the Census Bureau still don't know even roughly how many illegal aliens it'll be able to identify, let alone how their number and geographic concentration might affect apportionment."

At the end of the day, the court's six-justice conservative majority said, the case was not yet ripe for resolution because none of the 23 states or immigrant groups that brought it had yet been injured.

Though the court's opinion was unsigned, Chief Justice John Roberts almost certainly was the author. He signaled the outcome at the oral arguments, observing, "Right now ... we don't know what the president is going to do. We don't know how many aliens will be excluded. We don't know what the effect will be on apportionment," so why, he asked, aren't we "better advised" to wait until we have that information.

And wait is what the conservative court majority decided to do.

Writing for the three, Breyer noted that Trump's July memorandum explicitly stated his purpose, namely to take away congressional seats from mainly Democratic states that are now home to many unauthorized immigrants.

"The harm is clear on the face of the policy," Breyer said.

The "costs" of Trumps census order, he said, are more than "a departure from settled law."

"The modern census emerged from periods of intense political conflict, whereby politicians sought to exploit census procedures to their advantage," he wrote. "In enacting the 1929 [Permanent Apportionment] Act, Congress sought to address that problem by using clear and broad language that would ... remove opportunities for political gamesmanship."

Departing from the text of that law, he said, "is an open invitation" to allow a return to that kind of gamesmanship.

While Friday's decision does leave open the possibility for Trump to try to remove some undocumented immigrants from the census count for apportionment purposes, the decision was at best an interim and uncertain victory for the president.

But Justice Department spokesperson Mollie Timmons said, "We are pleased that today's ruling clears the way for the Commerce Department to continue its work on the census and send its full tabulation to the President."

Immigrant rights advocates warned immediately they would sue again if the administration seeks to implement the policy.

New York State Attorney General Letitia James, whose office led most of the state governments that sued the Trump administration, added: "We will continue to do whatever is necessary to stop the president from putting politics above the law."

While Friday's decision took no position on the merits of the case, at the oral arguments a majority of the justices indicated a hostility to the Trump administration's position. Trump's newest appointee, Amy Coney Barrett, noted that reapportionment has never excluded residents of a state because of their immigration status, and she pointedly told the acting solicitor general that "a lot of historical evidence and longstanding practice cuts against your position."

For now, though, the court has avoided any ruling on that or other issues presented by Trump's census policy.

So, what happens next is murky. NPR and other news organizations have reported Census Bureau officials have indicated that because of the pandemic, they are not likely to be able to meet the Dec. 31 deadline for submitting their report to the president.

But even if Trump gets the figures in time, and does send them to the House of Representatives, as required by law, the clerk of the House, if the clerk chooses, may decline to accept them as reliable, kicking them back to the new Biden administration for completion.

That has never happened before. But Trump's norm-busting attempt to exclude unlawful immigrants from the census could provoke yet another first.

The case began in July when Trump issued a memorandum ordering the Census Bureau to send him two sets of numbers. One set was to be the whole number of persons in each state. The second set would allow the number of undocumented immigrants in each state to be subtracted from those numbers for purposes for determining how many seats each state gets in the House.

Twenty-three states challenged Trump's directive in court, along with immigrant rights advocates and other groups. Lower courts blocked Trump's plan from going into effect, saying it violated the Constitution, federal census statutes or both.

The Trump administration appealed to the Supreme Court, arguing the president has "virtually unfettered discretion" as to what data are used in the decennial census. But the lower courts rejected that claim, with both Republican- and Democratic-appointed judges ruling against him.

Among the arguments made by the administration was the assertion that undocumented immigrants are not inhabitants as the Framers would have understood the term when writing the Constitution and deciding how to divide up federal power among the states.

Countering that argument, states and immigrant groups noted that about two-thirds of unauthorized immigrants have lived in this country for at least 10 years, with the median being 15 years.

The litigation added difficulty for an already-burdened Census Bureau, which geared up for the nationwide rollout of the census count just as the COVID-19 pandemic began hitting with full force in April.