Accessibility links
A Rural School Under Pressure To Stay Open: 'People Are Just ... Rough And Tough' Despite alarming rises in COVID-19 cases and deaths in rural America, some schools are under pressure to stay open for in-person learning while resisting requiring masks and other measures. 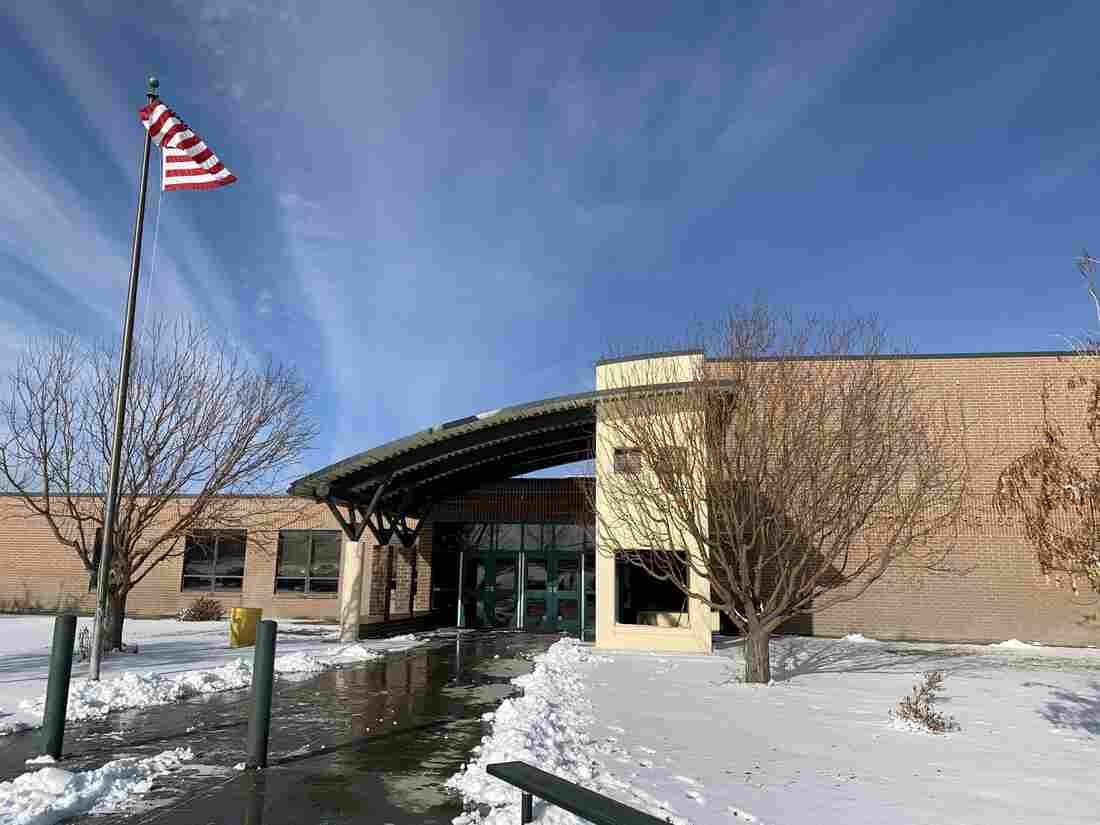 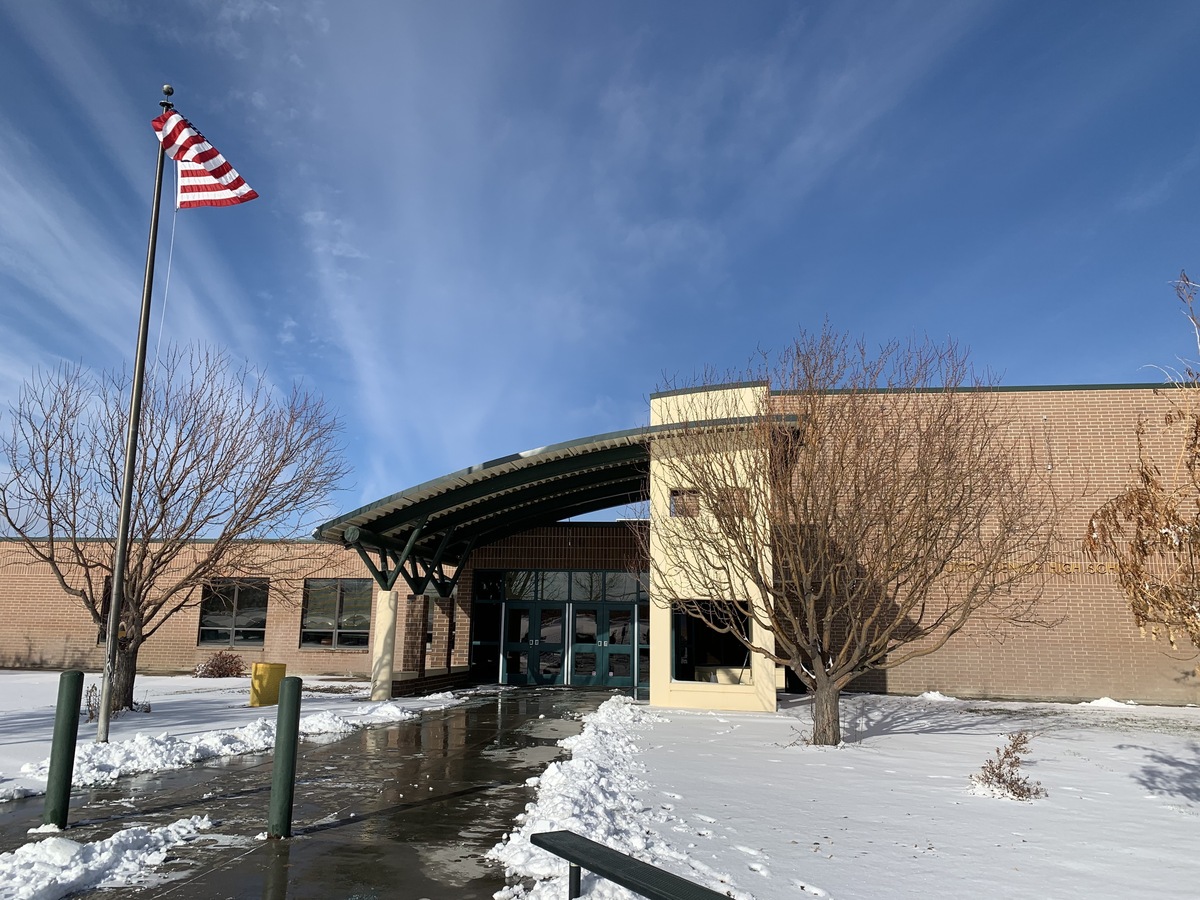 Rimrock Junior/Senior High School in Bruneau, Idaho. Despite recent outbreaks that forced temporary closures, the Bruneau-Grand View school board in Idaho voted down a mask mandate in November.

It can feel like a parallel universe when you go from a city where kids are cooped up inside at home doing school virtually on their tablets to an isolated small town such as Bruneau, Idaho.

Visit this rural school in Idaho and you'd be forgiven for thinking the pandemic was over. But there's much more to this story. Listen Friday on @MorningEdition pic.twitter.com/AJBFE3hnlL

One afternoon this week, the bell had just rung and kids were emptying out of the small elementary school and into the snowy parking lot, almost as if it's 2019 and there is no pandemic.

No one appears to be wearing a mask, which is just fine with parents such as Cassandra Folkman.

She's sitting in her idling pickup waiting to pick up her kindergartner and second-grader.

"I'm not scared of the virus, I guess," she adds. "It seems like it's just another string of the flu."

It's not. COVID-19 has killed more than 1,200 Idahoans so far this year, six times more than the flu has annually in recent seasons.

Case numbers have shot up lately in rural America, which skews older and tends to have huge inequality gaps in health care. Across the country, many schools that have stayed open require students and staff to wear masks.

But there's still resistance in places such as Bruneau, which has a population of 500. Here, there's also a pervasive sense in the community that kids need to be physically in classrooms for their education and well-being yet stiff opposition to rules intended to slow the spread such as mask-wearing.

Sariah Pearson teaches fourth and fifth grades at Bruneau Elementary. She got COVID-19 and was sidelined for almost six weeks this fall.

She's back in the classroom, feeling better, and even paid $300 for a special air filtration system, and frequently keeps her windows open to be safe. But her story hasn't had much of an effect on the town's attitudes about the pandemic.

"Most people don't really want to hear about it," Pearson says. "Even though they care about me, it does not translate over."

This truth got sharper in recent weeks, even as COVID-19 began to spread in the two Snake River farming towns that make up the joint Bruneau-Grand View School District. As more teachers and students got the virus, administrators had to shut down some classes and move them online temporarily, which, while not hoped for, had always been part of the contingency plan.

"I think if you had to sum it up in one word it would be unpredictable," says Ryan Cantrell, the district superintendent.

By November things had gotten bad enough that Cantrell recommended the school board require masks everywhere on campus. The science shows masks work to reduce the virus's spread, and it was seen as one key strategy to ensure the district could keep in-person learning going.

The week after Thanksgiving, Cantrell, who also helps administer tests and does contact tracing, says there were six more confirmed positives, and seven the following week.

"They [students] had then exposed the subs, who were already filling in for some of the teachers who were either out sick or out for self-quarantine," Cantrell says. "We simply ran out of substitute teachers."

So he was forced to close all schools and move them to virtual for a week, figuring that stopgap measure may get them through to Christmas break.

One afternoon this week — the first day classes resumed — Cantrell walked the halls and checked on the health of his staff. He was virtually alone in wearing a mask, estimating that on any given day a dozen of the 180 or so students in the junior and senior highs are wearing them, and usually less than one-fifth of his 60 staff members districtwide.

"I'm going to model the behavior of wearing a mask," Cantrell says. "So I simply choose to wear one when I'm at school specifically when I'm out of the office and in the hallways." 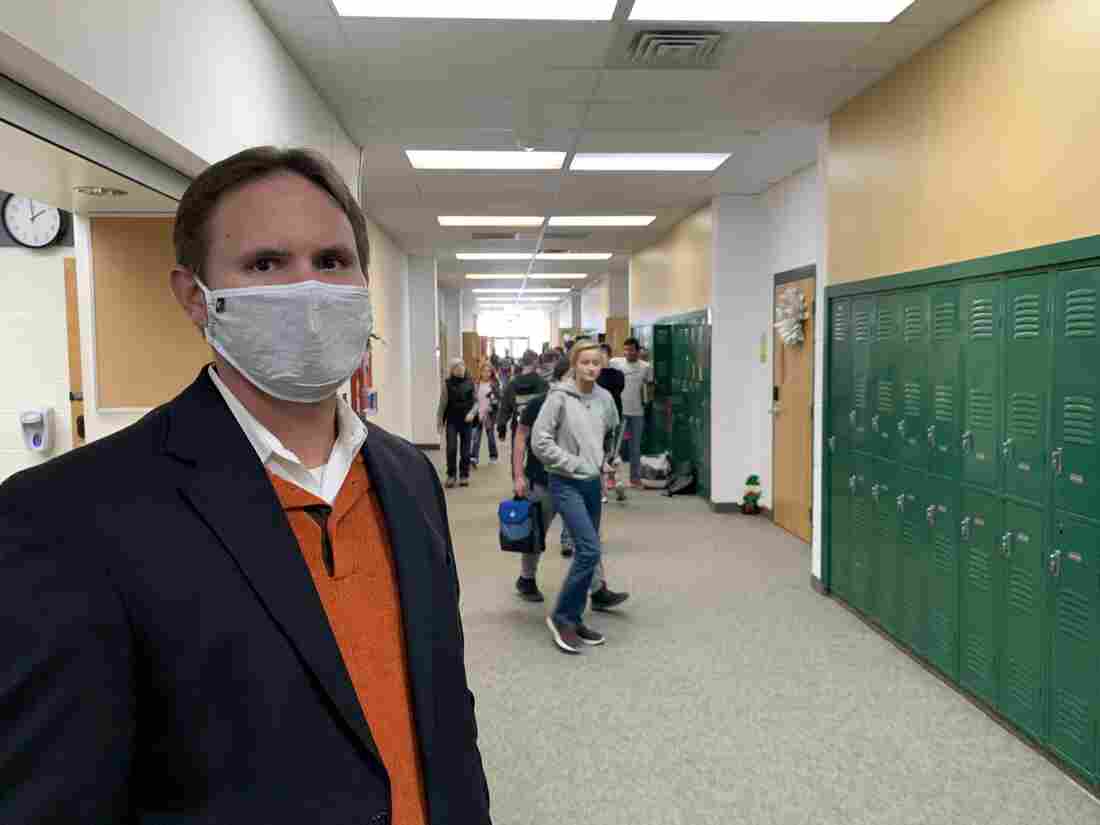 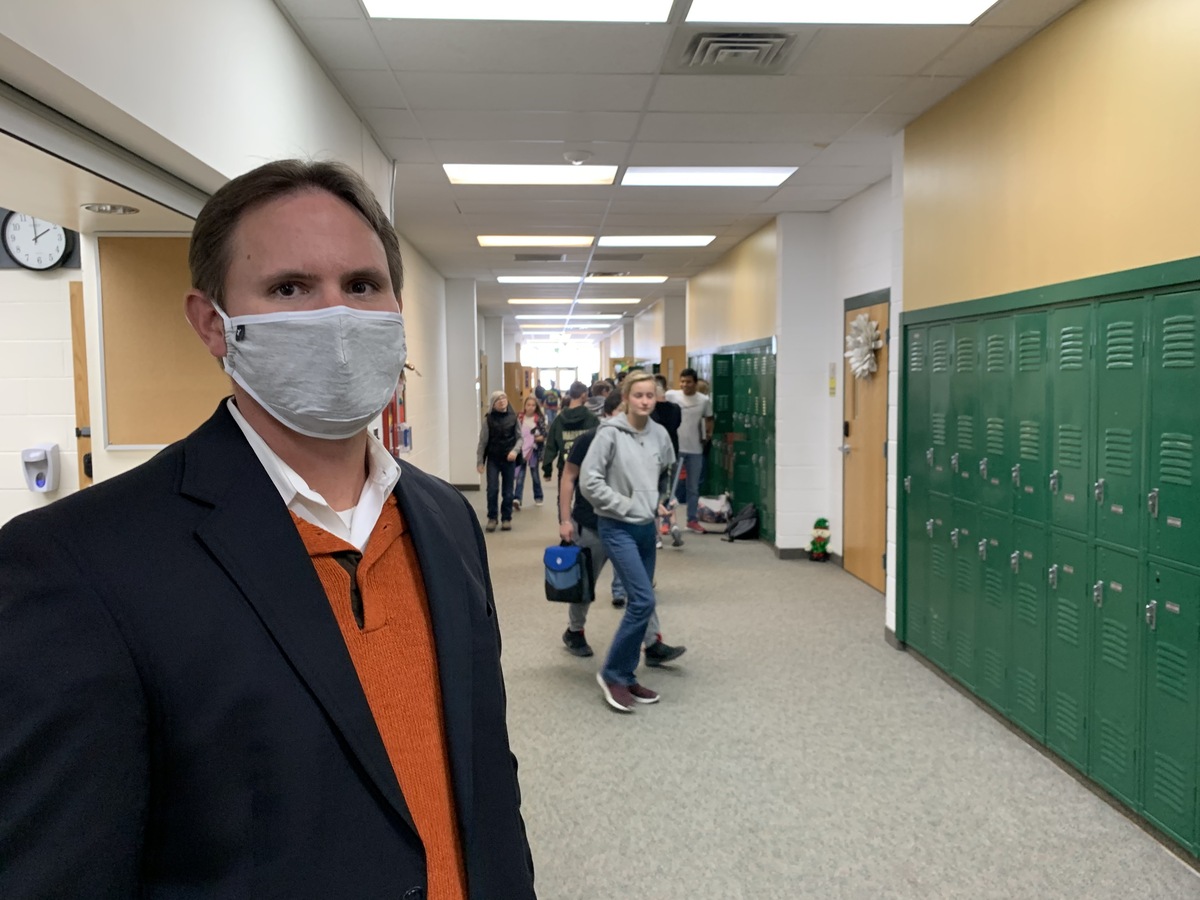 In the hallways, there's little if any social distancing going on. And what's more troubling, district officials say most of the students who have tested positive so far have been asymptomatic. But they've been passing it on unknowingly to staff.

"And usually they show the symptoms, and they're the ones that get knocked down and get sick from it," Cantrell says.

Still, there's a lot of pressure on leaders such as Cantrell to keep school open for in-person learning. And he understands that. Every time they've had to go virtual, especially when the lockdowns hit in March, grades tanked, and the emotional well-being of students and faculty suffered.

Kids go "off the map"

Pearson, the elementary school teacher who got COVID-19, says the Internet in rural areas is slow and it's hard to reach some of her kids when they move to all-virtual instruction. Unlike in many urban districts, teachers in small towns frequently are expected to teach both formats.

"There are certain kids, you do not see them, they go off the map," Pearson says. "Once they're doing online school, they don't log in, their packets come back and they haven't touched them." 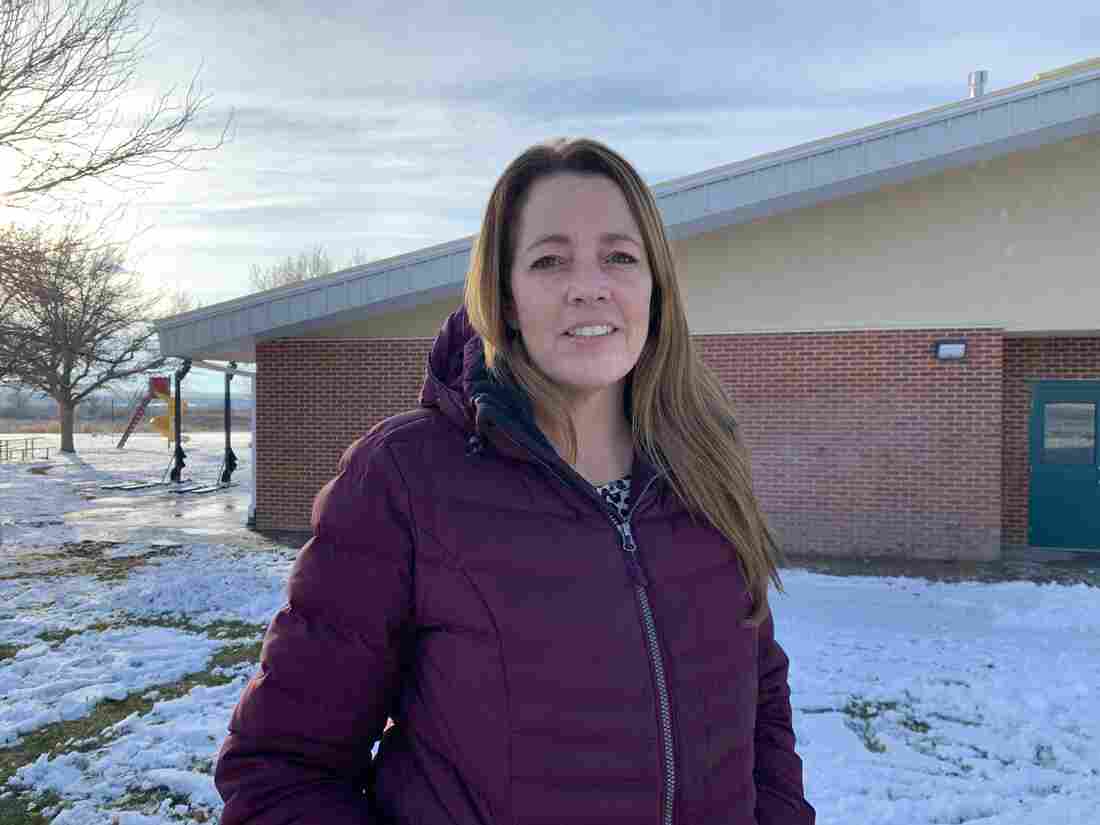 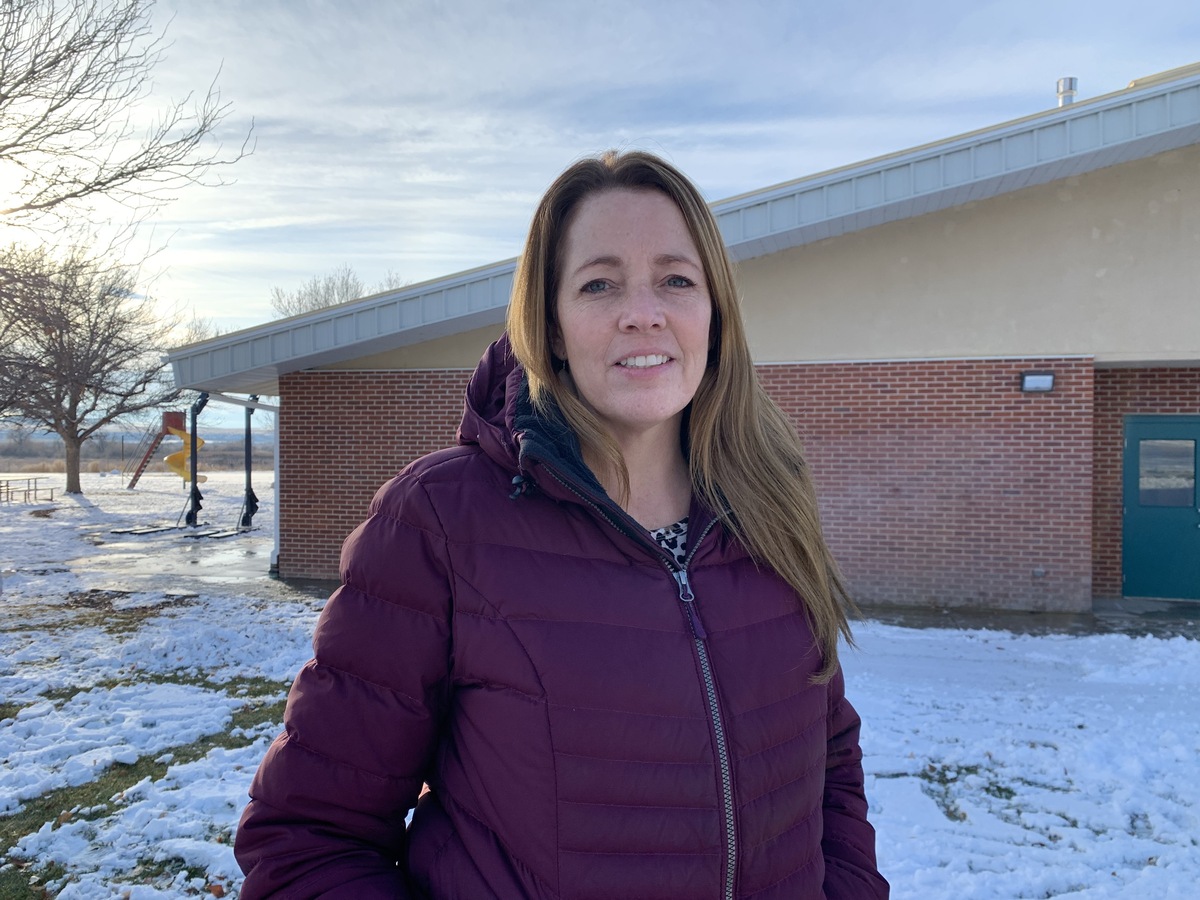 When it's remained open, monthly testing at Bruneau-Grand View has started to show that students are clawing back to the proficiency levels they were at before the pandemic.

People want the schools to do everything they can to stay open — everything except requiring students and teachers to wear masks. Currently, masks are only required on buses. The district also recently banned fans at sporting events, per Idaho's statewide restrictions on gatherings of more than 10 people.

The school is offering an all-virtual option for parents who want to keep their kids home. But most are like Brooklyn Kunsky, wanting them in school, without strict mandates.

"Our kids don't want to wear masks, our kids want to have a somewhat normal [life], if that's even, you know, a realistic word in the midst of all this, educational experience," Kunsky says.

You hear this a lot here, even among teachers and district staff. There are outbreaks at schools, asymptomatic kids bring it home and then there's community spread. Yet there's also this sense of, well, this is just how it is going to be.

Kunsky, who grew up in Bruneau and attended the same schools as her kids now do, thinks the district is managing the coronavirus crisis pretty well.

"I think when you live in a rural community, people are just ... I don't know, rough and tough, I don't know if that's the right word, but we just make it through," she says.