Accessibility links
Paint And Plywood Memorialize George Floyd In The Art Of An Uprising Artists inspired by the Black Lives Matter movement have created images that have lasted even as protests have faded. Who are they? And how will this iconic art be preserved?

The Art Of An Uprising: Paint And Plywood Memorialize George Floyd

The Art Of An Uprising: Paint And Plywood Memorialize George Floyd 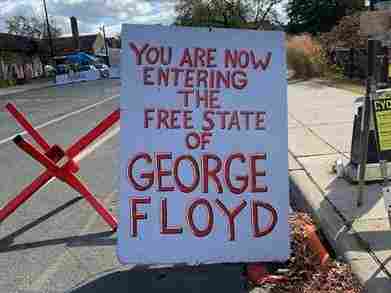 The protests that erupted after the killing of George Floyd by Minneapolis police have largely faded — but the colorful murals they inspired still line streets across the country. These murals were mostly painted on the pieces of plywood used to protect storefronts, and often memorialize not only Floyd but other victims of police killings, including Breonna Taylor and Tony McDade. It's another way they live on, and remind passers-by of why this movement began in the first place.

Unlike going to a museum to see work made by your favorite artist, in many ways these murals come to you. Wandering through the streets of my hometown of Oakland, Calif., I couldn't help but wonder: Who are the artists behind these murals? And what is it about this moment in particular that inspired them to distill their emotions into such powerful imagery? As winter approaches and the protests become less frequent, how are communities going to preserve these murals that now memorialize history? 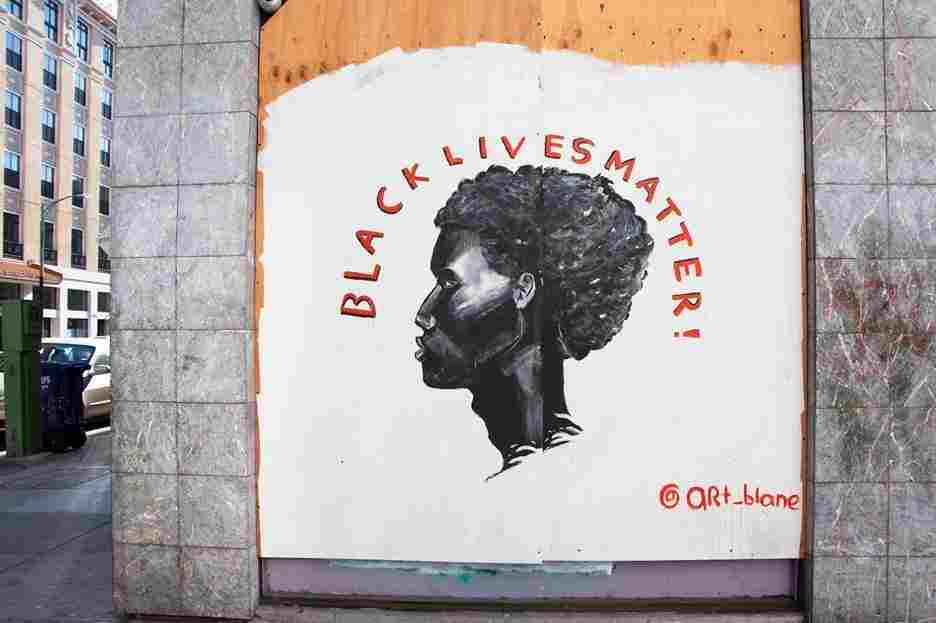 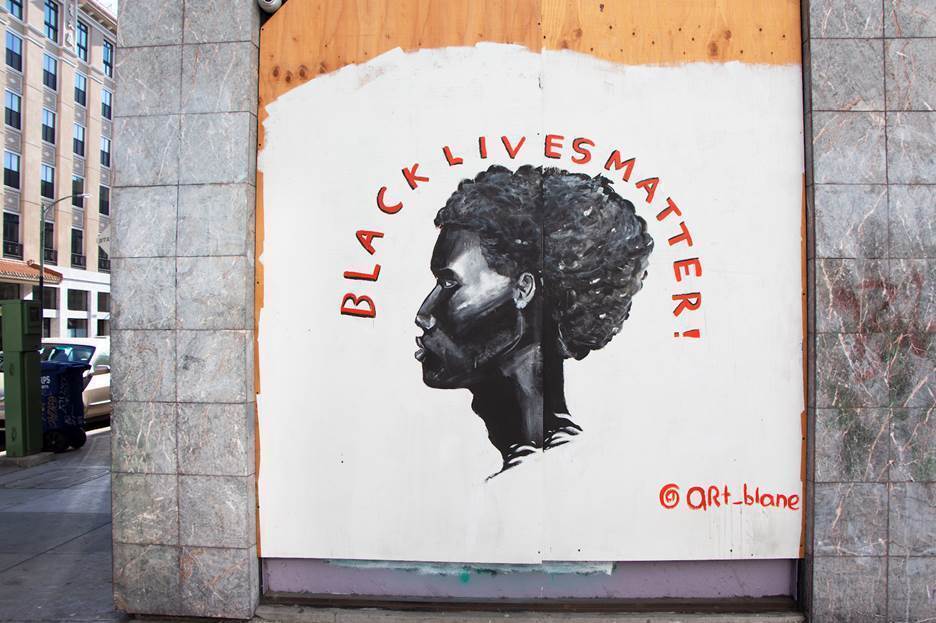 "I didn't know what I was doing!" says Blane Asrat, who painted a mural in Downtown Oakland of a woman with what Asrat describes as striking "East African features." Asrat had no intention of becoming a street artist. But on June 6, Asrat's friend asked her to volunteer with a group called Bay Area Clean Up — to help out after businesses in Downtown Oakland were damaged during the protests. When Asrat got there, she was instructed to paint over some graffiti that said "Black Lives Matter" on the plywood that covered up a shop called Pacific Range & Hoods.

But Asrat felt like this opportunity was too good to waste on just whitewashing a plywood board. She's a recently graduated art student, and she was inspired. She borrowed paints, plywood and brushes from other artists and started painting. She decided to keep the ethos of the "Black Lives Matter" graffiti in her mural, by painting the phrase in a red arc over the woman's profile.

This painting stands out, not only because of the contrast between the woman's Black profile on the white backdrop, but also the level of detail in the painting. Asrat says this is because she was new to street art, and drew on her formal training. She's used to painting mostly high-contrast, detailed figure illustrations. "I just did what I always do but larger," she says. "Most street artists have a more specific way of painting, catered to large surfaces."

She says painting the piece was charged with emotions sparked by the recent police killings. "Those murals represent a moment, because they were so spontaneous for the most part. And it was such a community thing," she explains. "I could see there was so much solidarity there." 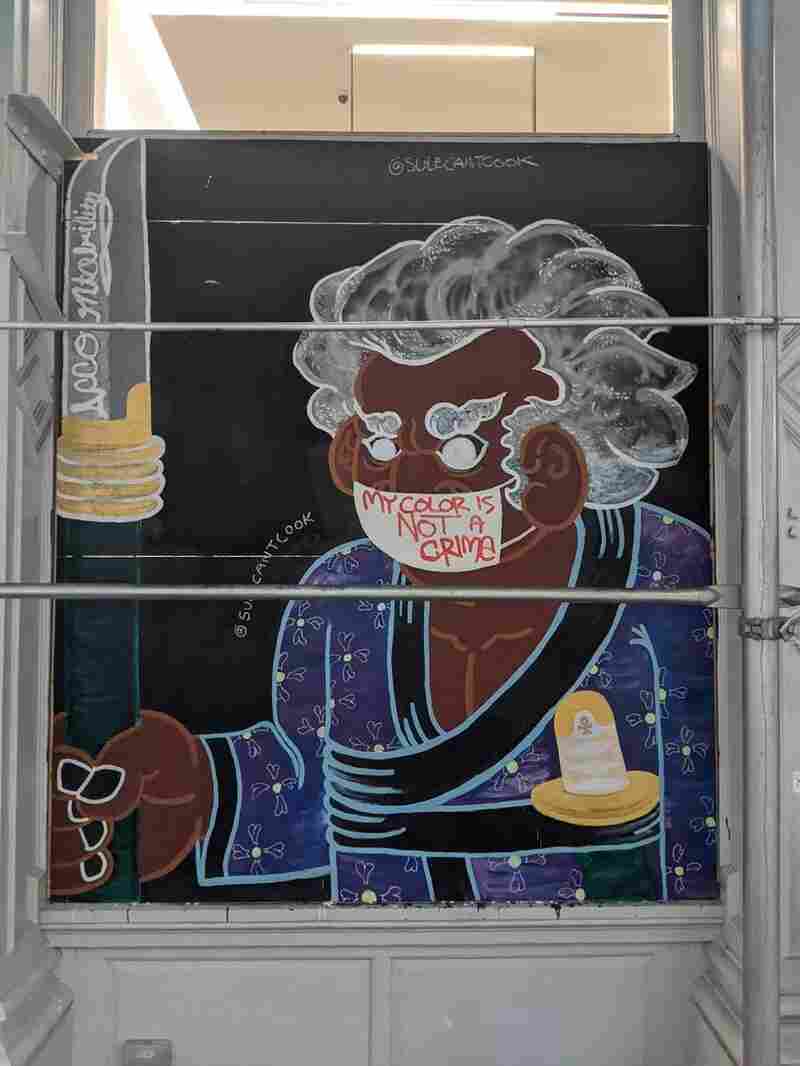 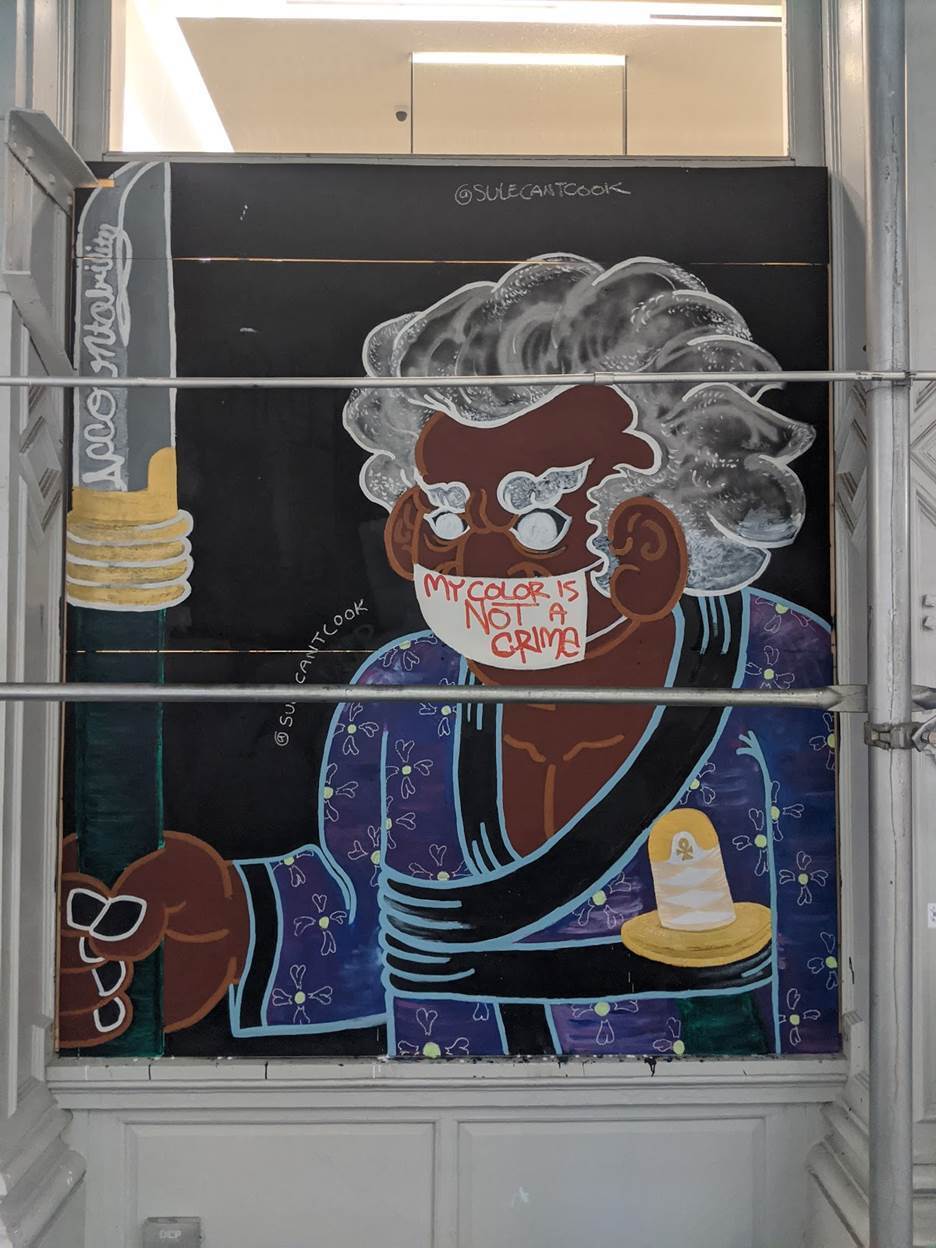 SoHo is one of Manhattan's wealthiest and most luxurious shopping districts, but the usually bustling outdoor mall energy was halted this year by the pandemic and the protests, with empty sidewalks and plywood boards covering up stores like Coach and Dolce & Gabbana. It was a scene that Esteban Sulé Marquez-Monsanto, or Sulé, describes as somewhat "apocalyptic." But he also saw an opportunity.

Alongside other artists, Sulé began to treat these plywood boards as blank canvases, and became part of a wave that ultimately gave birth to a new artist collective, The SoHo Renaissance Factory. In doing so, Sulé and others have reclaimed the streets of SoHo as a cutting-edge artists' space, as it once was in the early 1970s.

Before this summer, Sulé hadn't shared his art with anyone for a decade. But he was driven by the protests of Floyd's killing to start painting publicly again. "I wanted to create something to inspire people to keep fighting," he says, "regardless of what was going on around in their lives."

Sulé started painting murals of Black samurai characters — some of them wearing face masks with messages like My Color Is Not A Crime! "I wanted to demonstrate visually that Black is timeless and ancient and still here to this day — still fighting," he says. 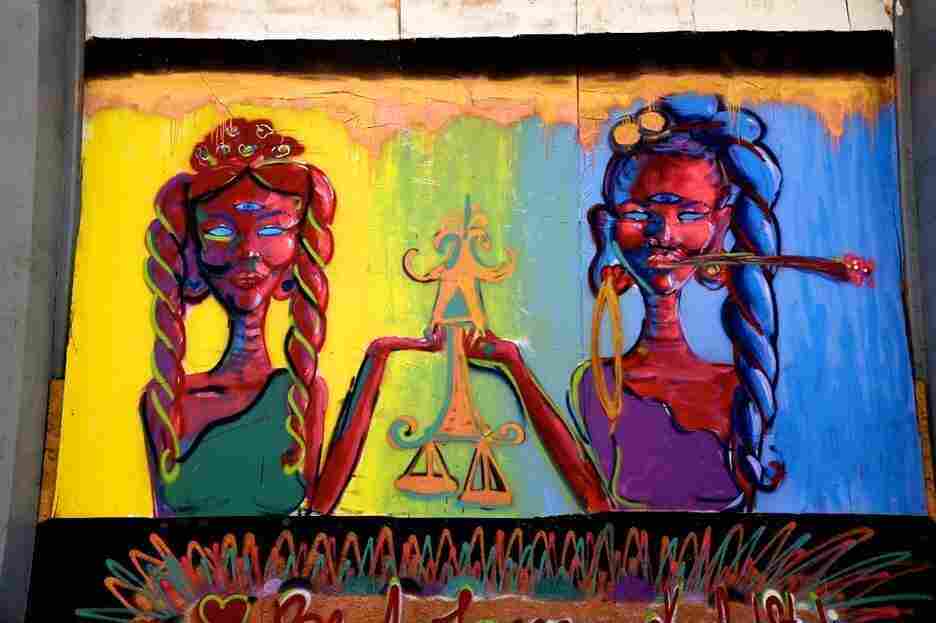 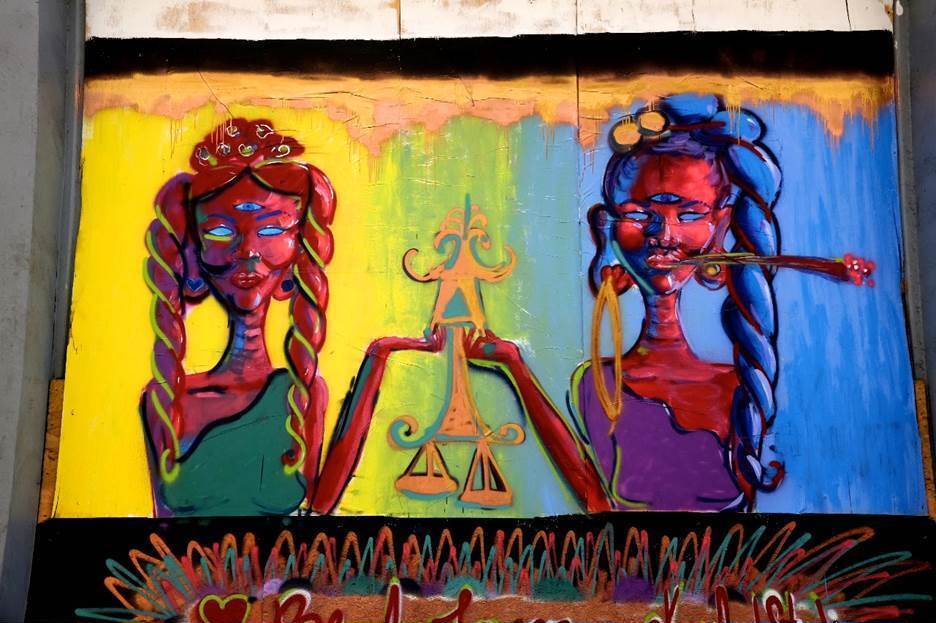 Konstance Patton is another member of the Soho Renaissance Factory. She's a Detroit-born street artist of over 20 years. When she heard about the new wave of murals in SoHo, she got some paints from a friend and enlisted the help of a security guard at the Nike store to let her know when the coast was clear. Konstance painted tall multicolored goddesses adorned with third-eyes, braids and jewelry. "What would this ancient figure be if she were in New York right now?" she asks. "What would her adornment look like? What would her hair be?"

On July 4, Sulé and Konstance met each other on Mercer Street, along with the three other founding artists of the collective, which came together casually and naturally. And eventually they started painting murals every day. Later in the summer, several of their murals were stolen. That's when the group came together to collect and store the murals in a studio for safekeeping. They will display some of them this week in an exhibition at the National Arts Club in New York.

When I ask Konstance about the group's historic influences, she exclaims, "The Factory! Warhol! Basquiat! Al Diaz — all those guys! The Harlem Renaissance. The tradition of New Yorkers of coming together and creating these works kind of like together but, not together. We work together, but we don't collaborate on pieces necessarily. We just collaborate on an idea sometimes or we just show up together and encourage each other!" 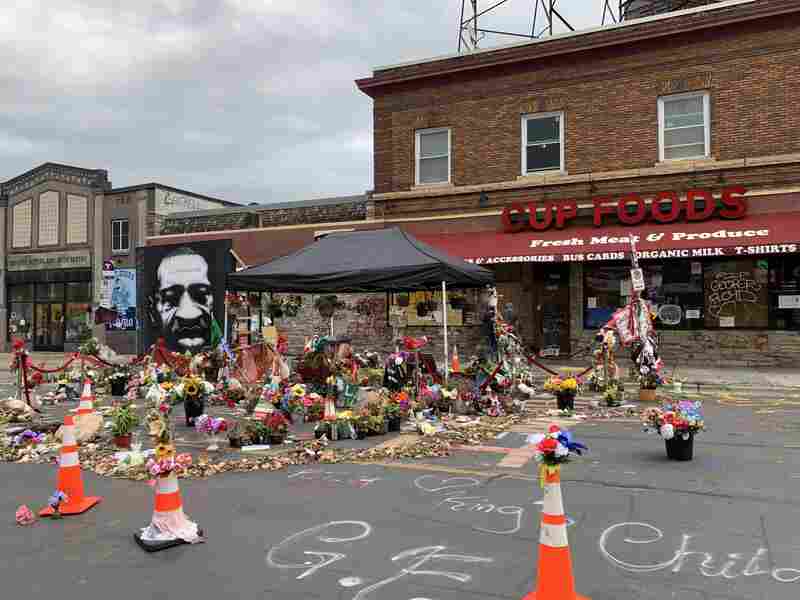 George Floyd memorial at the site where he was killed in Minneapolis. Heather Shirey and the George Floyd & Anti-Racist Street Art database hide caption 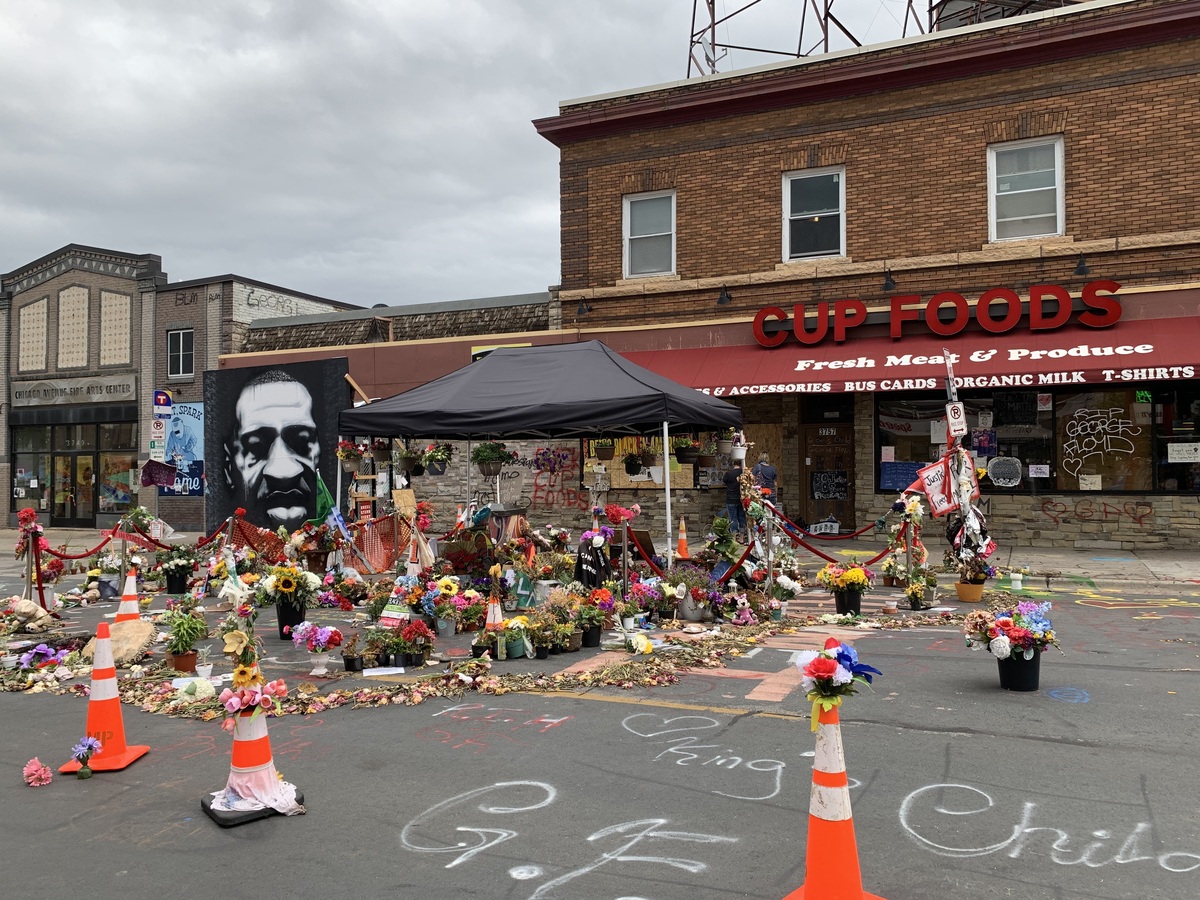 George Floyd memorial at the site where he was killed in Minneapolis.

A sacred installation in Minneapolis

In Minneapolis, where the protests began, the space around the Cup Foods store where Floyd was killed has now blossomed into a colorful and ever-growing installation. It's taken over several blocks — shutting down traffic for six months — and has become known as George Floyd Square.

Jeanelle Austin is one of the "caretakers" at George Floyd Square. She's the founder of the Racial Agency Initiative, a resource for racial justice leadership coaching in Texas, who returned to her hometown of Minneapolis during the uprisings in late May. As part of the protests, people started bringing objects to the square, and stayed to mourn and reflect. They left things like flowers, protest signs, potted plants, trinkets and original artwork. Austin calls these objects "offerings." She wanted a way to channel her activism beyond protesting, so she became one of the caretakers of George Floyd Square.

Austin paints me a picture of what it's like to visit the memorial. When you enter the square, you'll see a sign that says "You are now entering the Free State of George Floyd," and you'll be greeted by the gatekeeper, Ms. Eliza. You'll pass a number of installations listing the names of Black people killed by police in the U.S. and a greenhouse for the plants that people have brought. She says that, right now, you won't find the iconic sculpture of a Black Power fist that usually sits in the center of the roundabout because it's being cast in bronze to weather a Minneapolis winter. And in the exact place where Floyd was killed, there are red velvet ropes intertwined with flowers.

Austin studied theology and understands the sacred nature of this space and the spiritual significance it has for some people in the community. She becomes emotional as she describes an instance of an elderly woman leaving her house for the first time during the pandemic just to come see the installation. "I think it is important to remember what our elders went through so that we can even be here, laying the pieces of protest, art and offerings today," she says.

Austin pays attention to every single one of the offerings that people bring into the space. "Each piece holds within itself the energy of the uprising, of the person who wrote that letter or who drew that painting or who crafts that sculpture or picked out that rock or laid that T-shirt or their helmet or that plant or that flower," she says. "So every piece is sacred!"

These offerings began to overflow, so Austin finds ways to stack them in an aesthetically pleasing fashion. And when some of them started being ruined by the weather, she began taking damaged objects and storing them in a nearby theater, to repair, document and archive. She calls that "street conservation." Austin and her team at the George Floyd Global Memorial plan to create a museum that will exist as an extension of the memorial. "Because a lot of the energy really comes from the pieces, where they can continue to tell the story," she explains.

Recently, city leaders have begun to discuss clearing George Floyd Square to let traffic resume. But Austin says she has absolutely no plans of closing the memorial down. She explains that many of the organizers of this memorial live in the neighborhood. She says she recently told a city council member that, "Y'all can come. And y'all can clear us out ... but you know that, like, we live here, right? So we'll just come back out the next day."