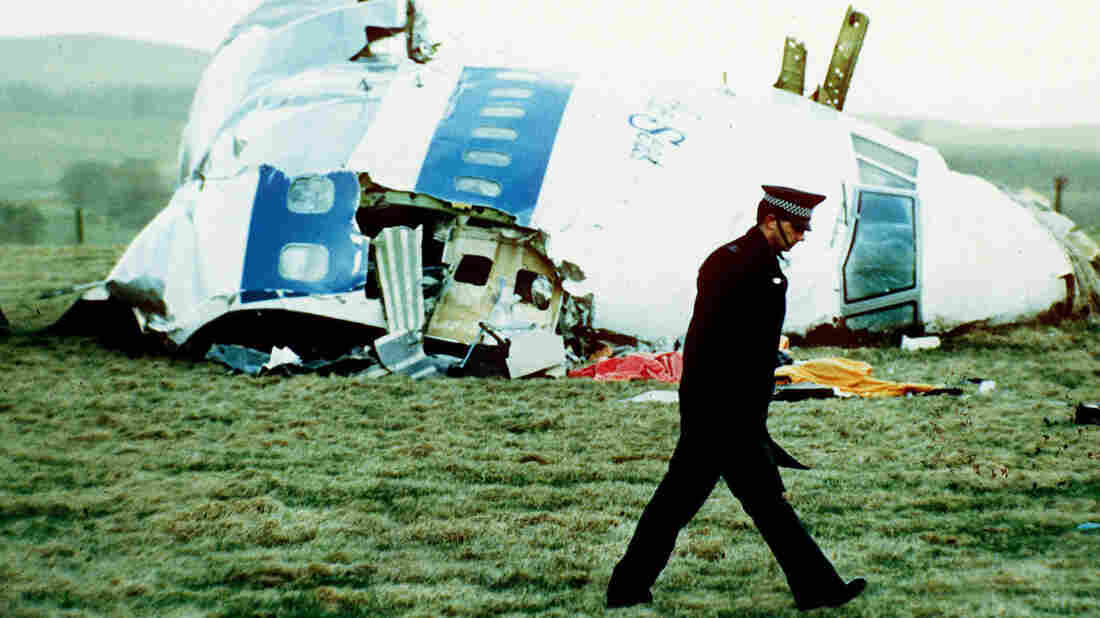 A police officer walks on Dec. 21, 1988, by the nose of Pan Am Flight 103 near Lockerbie, Scotland, where it lay after a bomb aboard exploded, killing a total of 270 people. Martin Cleaver/AP hide caption 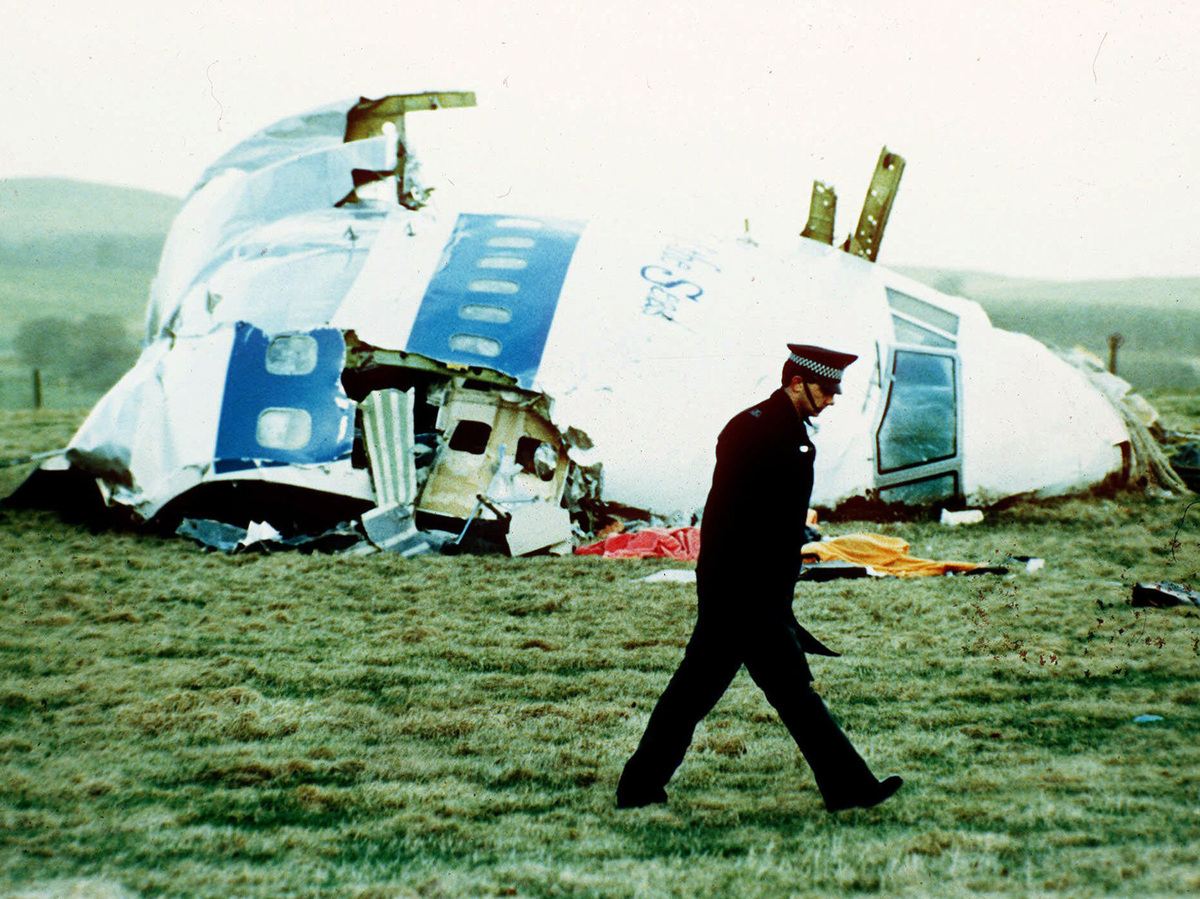 A police officer walks on Dec. 21, 1988, by the nose of Pan Am Flight 103 near Lockerbie, Scotland, where it lay after a bomb aboard exploded, killing a total of 270 people.

The U.S. Justice Department has charged a Libyan man with constructing a bomb that detonated on a passenger plane over Lockerbie, Scotland, in 1988, killing 270 people and launching a decades-long international manhunt for the culprits.

Federal authorities trained new firepower on the case last year after conducting a review of counterterrorism matters that had languished. A breakthrough came after Libyan authorities apprehended Mas'ud and interviewed him about his alleged role in the Lockerbie bombing, then shared the transcript with U.S. prosecutors.

The bombing of Pan Am Flight 103 cost the lives of 190 Americans. Barr said it remains the single deadliest terror attack in the history of the United Kingdom, and the second deadliest for Americans, after 9/11.

"Let there be no mistake: No amount of time or distance will stop the United States, and its partners in Scotland, from pursuing justice in this case," Barr said. 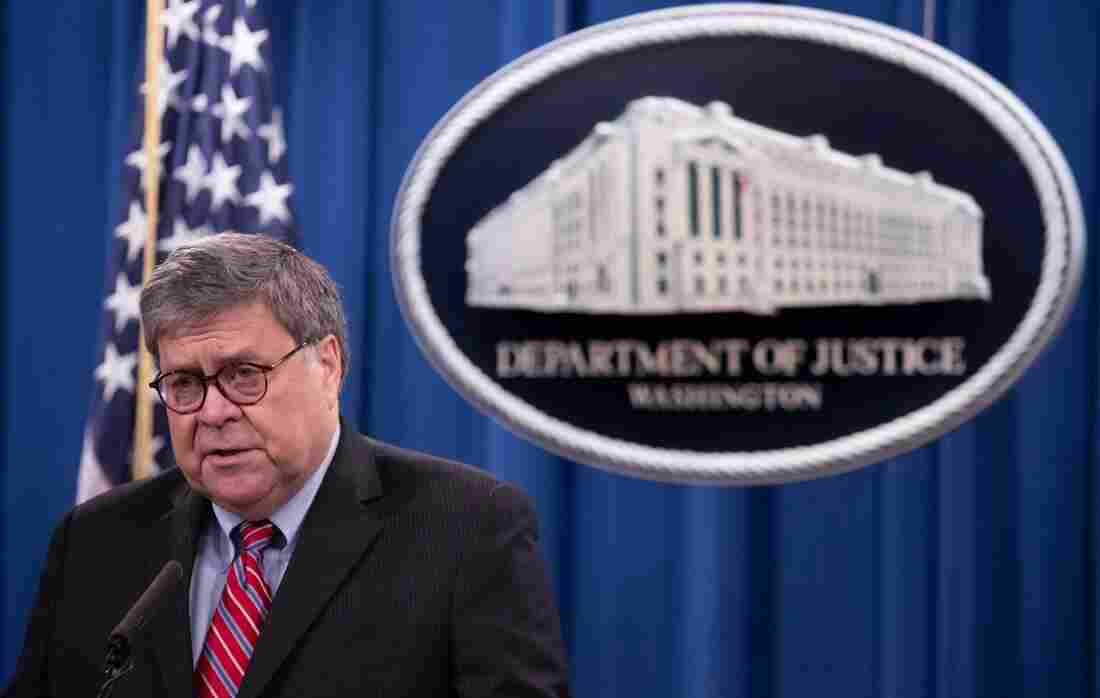 U.S. Attorney General William Barr provides an update on the investigation into the terrorist bombing of Pan Am Flight 103 on Monday — the 32nd anniversary of the attack. Michael Reynolds/Pool/AFP via Getty Images hide caption

The charges represent a closing of the circle for Barr, who tasked his then-criminal division chief, Robert Mueller III, to investigate the bombing during their earlier stint in government under President George H.W. Bush.

On Monday, Barr said the attack would be "forever seared in our memories."

Barr made the announcement during his last week as attorney general for President Trump, after announcing his resignation a week ago.

The attack appears to have made a deep impression on both Barr and Mueller, who have appeared at annual remembrance ceremonies over the years, alongside the families of victims.

Kara Weipz, whose brother Rick Monetti died on the flight, said at the news conference that relatives felt "justified, vindicated" for their persistence and said the new charges underscored their motto that "the truth must be known."

Filmmaker Ken Dornstein, who lost his brother David on Flight 103, later delved deep into the case in a 2015 documentary for Frontline, called My Brother's Bomber. Dornstein told Morning Edition host Noel King Monday about his painstaking trace of travel documents and interviews with another former Libyan intelligence officer that helped lead him to Mas'ud's alleged involvement in the attack.

"I could tell you pretty certainly that the last hands on that bomb before it went into the suitcase, which went into the luggage system, which took down Flight 103, that those last hands belonged to [Mas'ud]," Dornstein said.

Mas'ud is in Libyan custody. Barr said he hoped that Libyan officials would permit him to be transported to the U.S. to face justice here and that they would assist in a prosecution.

The only man convicted for his role in the bombing, Abdel Basset Ali al-Megrahi, died in 2012 after serving several years in prison. Scotland granted him compassionate release after his lawyers said he had cancer and was on the verge of death. He lived for about three more years.

The Lockerbie investigation had been one of the most complex investigations for the FBI, which helped conduct more than 10,000 interviews. Forensic experts eventually traced a thumbnail-sized bit of evidence to a cassette player they believe contained the bomb. The Libyan government took responsibility for the crime.

William Barr To Step Down As Attorney General Before Christmas

Former FBI Director Mueller, who went on to investigate Russia's attack on the 2016 election, talked with bureau officials years later about how the case touched him.

"The constables in charge of the Scottish end of the investigation had constructed a small wooden warehouse in which were stored the various effects of those who were on the plane when it broke apart in the skies: a white sneaker never again to be worn by the teenager, a Syracuse sweatshirt never again to be worn by the Syracuse student and other such everyday pieces of clothing and personal belongings," Mueller said.

Continued the director: "These ordinary items brought home to me — and came to symbolize for me — the pain and the loss felt by those whose family, friends or colleagues died that evening."

The attack killed all 259 people aboard the plane and 11 people on the ground. Some 35 students from Syracuse University who had been studying abroad and returning home to spend Christmas with their families perished on the plane.

The FBI's experience in the Lockerbie case pushed the bureau to launch a program to help crime victims and their relatives. Kathryn Turman, who went on to lead the victim services team, helped arrange a video feed of the proceedings in the al-Megrahi trial so that family members could watch.

Michael Sherwin, the acting U.S. attorney for the District of Columbia, also announced on Monday that Mas'ud had been charged in connection with his role in the April 5, 1986, bombing of the La Belle Discotheque in West Berlin. Two American service members died there.

Sherwin cited travel records as more evidence of Mas'ud's role in the alleged conspiracy. Mas'ud served in the Libyan intelligence service from 1973 to 2011, prosecutors said.