Accessibility links
Trump Pardons Include George Papadopoulos, Duncan Hunter In all, President Trump granted full pardons to 15 individuals and commuted part or all of the sentences of an additional five. 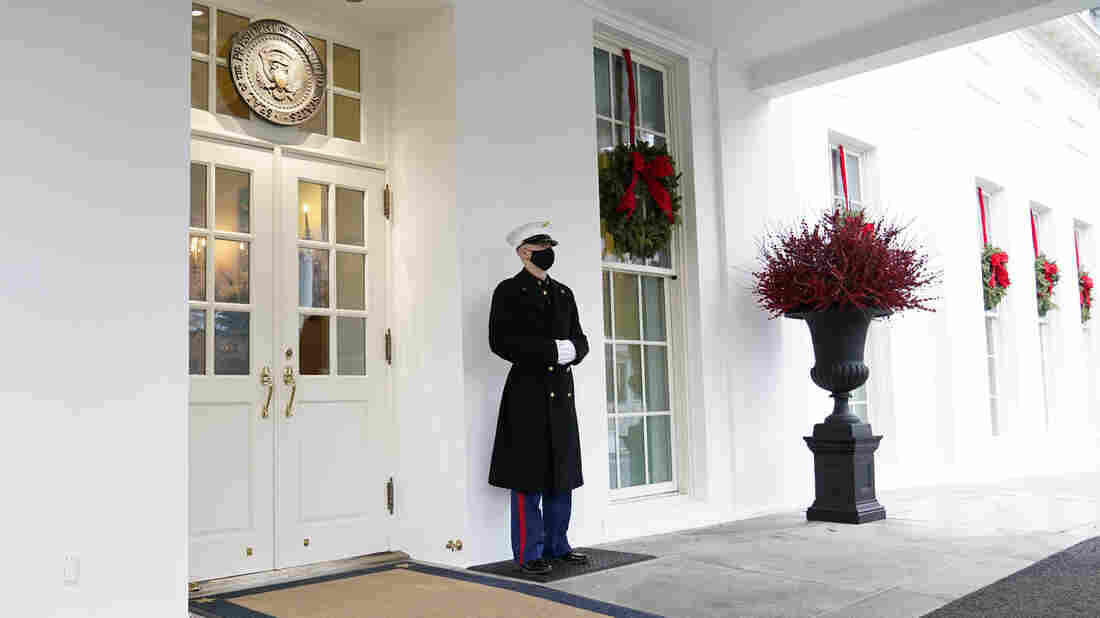 A Marine stands outside the West Wing of the White House last week. President Trump has been lobbied by advocates to use his powers to grant pardons and commutations ahead of leaving office. Susan Walsh/AP hide caption 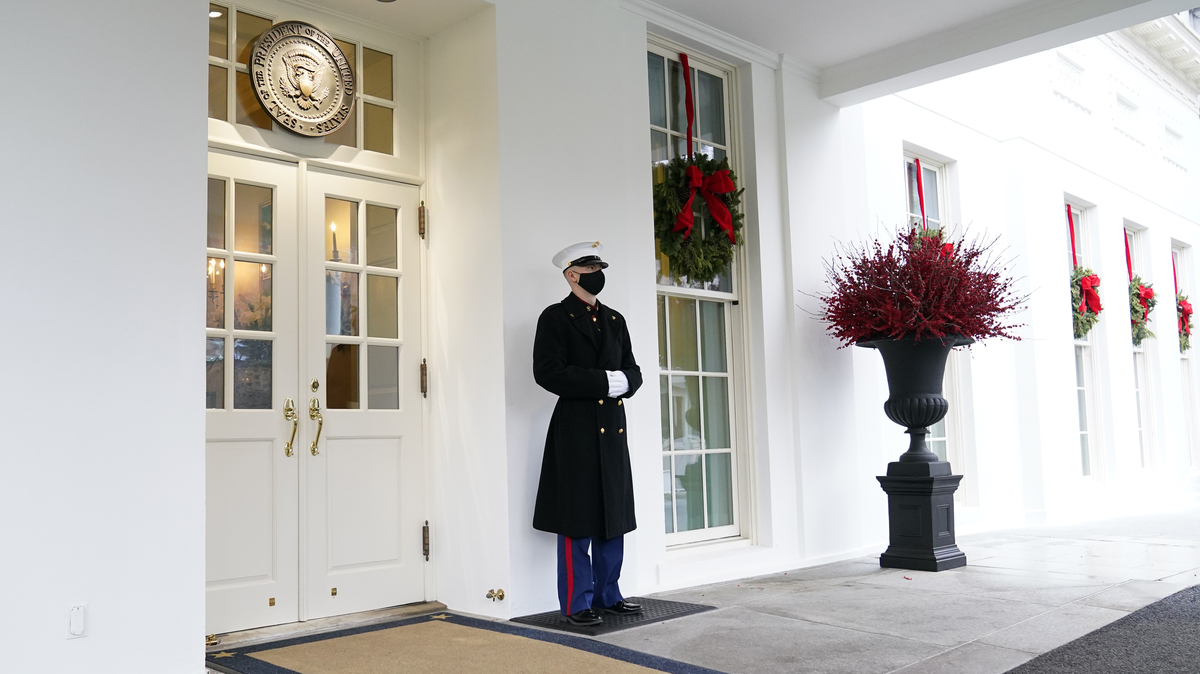 A Marine stands outside the West Wing of the White House last week. President Trump has been lobbied by advocates to use his powers to grant pardons and commutations ahead of leaving office.

Perpetrators of a massacre, perjurers, corrupt politicians, money launderers, nonviolent convicted drug dealers and a 1950s moonshine-maker are among those whom President Trump granted clemency on Tuesday, ahead of the Christmas holiday.

In all, Trump granted full pardons to 15 individuals and commuted part or all of the sentences of an additional five.

Among the high-profile pardons are three former Republican members of Congress, including Duncan Hunter, who pleaded guilty to misusing campaign funds; Trump also singled out George Papadopoulos, a former campaign adviser who was charged in connection with special counsel Robert Mueller's Russia investigation; four Blackwater mercenaries who were convicted for killing civilians in Iraq; and two Border Patrol agents who attempted to cover up their shooting of a Mexican national fleeing arrest.

The move comes as activists have lobbied Trump to use his executive powers to help prisoners who are serving what they view as unduly long sentences.

Before this latest batch, Trump had issued 28 pardons and 16 commutations during his time in office.

Presidents traditionally have granted a large number of pardons and commutations before leaving office, especially when dealing with controversial cases. Trump is expected to follow that path, but he has not shied away from granting clemency in high-profile cases, even early on in his presidency.

In 2007, Nicholas Slatten, Paul Slough, Evan Liberty and Dustin Heard were working as Blackwater guards on an assignment to protect a U.S. convoy in Baghdad. But a jury found they instead ambushed innocent civilians without provocation. On Sept. 16, 2007, the ex-guards opened fire with machine guns and grenade launchers in Baghdad's Nisour Square, killing 14 unarmed civilians and wounding 17 others. All four men were convicted in 2014 for their roles in the massacre on charges ranging from first-degree murder to voluntary manslaughter.

Slatten was convicted of murdering the driver of a white Kia that was stopped in the square. As NPR reported, the court's opinion stated, "The government's case against Slatten hinged on his having fired the first shots, his animosity toward the Iraqis having led him to target the white Kia unprovoked."

The men, as well as Blackwater officials, all maintained that the for-hire guards were attacked first. Defense attorneys also accused witnesses of fabricating their testimony.

Blackwater Worldwide — whose founder and former CEO Erik Prince is the brother of Education Secretary Betsy DeVos — was banned from serving U.S. contracts in Iraq in 2009.

A previously unknown figure, Papadopoulos was plucked from obscurity by Trump in March 2016. The following year, Papadopoulos pleaded guilty to lying to the FBI about his contacts with Russian operatives — lies that hampered the bureau in its Russia investigation. In 2018, Dutch attorney Alex van der Zwaan was hit with the same charge by Mueller. Both pleaded guilty to lying to investigators and served short prison sentences.

At his sentencing in September 2018, Papadopoulos told the court he recognized what he did was wrong.

The candidate and later president distanced himself generally from the Russian help his team received and specifically from Papadopoulos.

On the day of his sentencing, Trump told reporters: "I see Papadopoulos today; I don't know Papadopoulos, I don't know. ... They got him on, I guess, on a couple of lies."

Papadopoulos served a 14-day prison sentence. After his release, he repeatedly attacked the Russia investigation and claimed the FBI set him up.

As NPR reported, "Van der Zwaan was sentenced to 30 days in prison and fined $20,000 after he pleaded guilty to lying to investigators about his work for [law firm Skadden, Arps] with Paul Manafort and his protégé, Rick Gates."

He has since been deported to Europe.

Hunter, the former congressman from California, was sentenced in March to 11 months in federal prison after pleading guilty to a single count of unlawfully using more than $250,000 in campaign funds, just one of 60 counts he and his wife, Margaret, faced at the time. Court documents stated the former Marine and his wife racked up more than $37,700 in overdraft fees and stole the money to cover basic living expenses — including their children's schooling, groceries and pet food for the family rabbits. They then splurged on big-ticket items, including luxury hotels, airline tickets and dinners.

Hunter's 11-month prison sentence had been postponed due to the coronavirus pandemic and was set to begin in January. Trump's full pardon means he will serve no time.

Collins, who served on the board of an Australian biotech company, Innate, pleaded guilty to tipping off his son and the father of his son's fiancée about the results of a drug trial so they could unload stock ahead of a bad announcement. That information allowed them to make timely stock trades and avoid more than $768,000 in losses, according to court documents.

Collins was the first House Republican to endorse Trump in the 2016 presidential election.

Trump commuted the remaining prison sentence of former Rep. Steve Stockman, R-Texas, who was convicted of 23 felony counts, among them money laundering and mail and wire fraud.

As The Texas Tribune reported:

Stockman has served more than two years of his 10-year sentence. On Tuesday, the president explained that the 64-year-old "has underlying preexisting health conditions that place his health at greater risk during the COVID epidemic, and he has already contracted COVID while in prison."

Despite being freed from prison, Stockman will remain subject to a period of supervised release and an order requiring he pay more than $1 million in restitution.

Trump granted full pardons to Ignacio Ramos and Jose Compean, two former Border Patrol agents who in 2005 shot an alleged drug dealer crossing the U.S.-Mexico border in 2005. Ramos and Compean claim the man was carrying a gun. The man they shot in the buttocks escaped back across the border to Mexico.

Their case became a cause célèbre for anti-immigration advocates. But a federal prosecutor charged Ramos and Compean in the shooting, claiming no gun from the alleged drug dealer was ever found. The prosecutor said the agents wrongfully fired their weapons and then failed to report the shooting. They then tried to cover up the incident by picking up spent shell casings. A judge sentenced Compean to 12 years and Ramos to 11.

The White House said Costa "took full responsibility for his conduct, served two years of probation, and paid nearly $300,000 in fines and restitution."

Philip Esformes, who was sentenced to 20 years in prison last year for what the Justice Department has called the largest single health care bribery and kickback scheme in U.S. history, according to the Chicago Tribune, has also had his prison term commuted by Trump. The president held up the remaining aspects of his sentence, including supervised release and restitution.

Esformes owned nursing homes stretching from Chicago to Miami. He garnered $1.3 billion in Medicaid revenue by bribing medical professionals to refer their patients to his facilities. He also paid off government regulators to turn the other way when older patients were housed alongside younger adults suffering from mental illness and drug addiction — a mix that led to at least one killing, according to the Tribune.

While Trump has pardoned a number of politically connected allies, he has also intervened in the cases of some people caught up in the war on drugs – those hit with the mandatory minimum sentences often blamed for the exploding prison population in the past few decades.

The president reduced the remainder of the prison sentences for three women — Crystal Munoz, Tynice Nichole Hall and Judith Negron — who were all previously convicted of drug crimes. Trump had previously shortened their prison terms, but his actions on Tuesday further reduced the terms of supervised release for the three women.

The recommendation for clemency for the three was made by Alice Johnson, the woman whose sentence was commuted by Trump after reality star Kim Kardashian got involved.

Clemency advocates have pressed Trump to act on more of these lesser-known cases, including on behalf of women who have or continue to serve what some consider to be onerous sentences.

Trump also granted a full pardon to Weldon Angelos, who was sentenced in 2002 to 55 years in prison for selling marijuana and carrying a handgun in the course of dealing. Angelos was released by judicial order after serving 13 years in prison.

Otis Gordon, who is now a pastor, and Philip Lyman, a former county commissioner in Utah, also received full pardons. Gordon was convicted of possession with intent to distribute. Lyman served 10 days in prison for protesting the Bureau of Land Management's decision to close the Recapture Canyon to ATV riders.

Alfred Lee Crum, 89, was also granted a full pardon by Trump for his involvement in illegally distilling moonshine in Oklahoma when he was just 19.

In 1952, Crum pleaded guilty to the crime and served three years of probation. He paid a $250 fine.