Accessibility links
Bus Transportation Plummets During Pandemic Even As Flights Pick Up Demand for bus travel has dropped sharply during the pandemic, jeopardizing an industry that ordinarily serves many lower-income travelers. 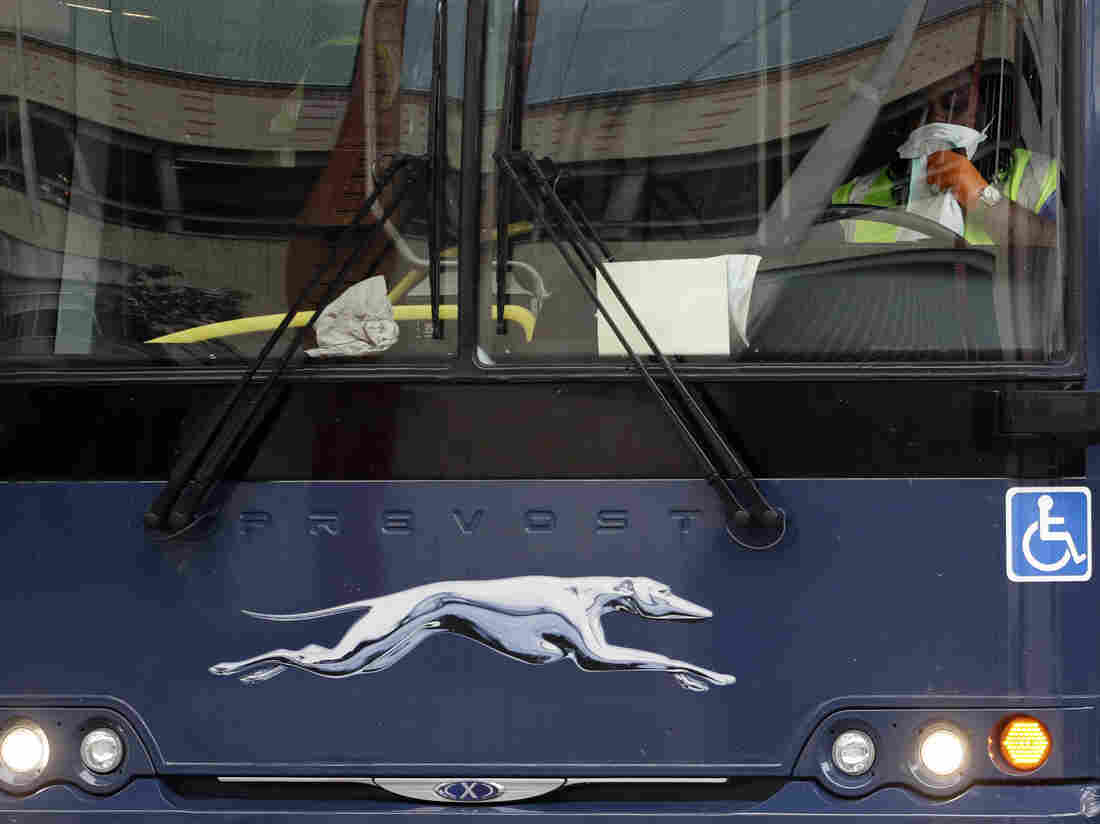 A Greyhound bus driver wears a protective mask and gloves as he prepares to depart a station in San Antonio, Texas, on March 30. Bus companies are struggling amid the pandemic, cutting off travel options for lower-income Americans. Eric Gay/AP hide caption 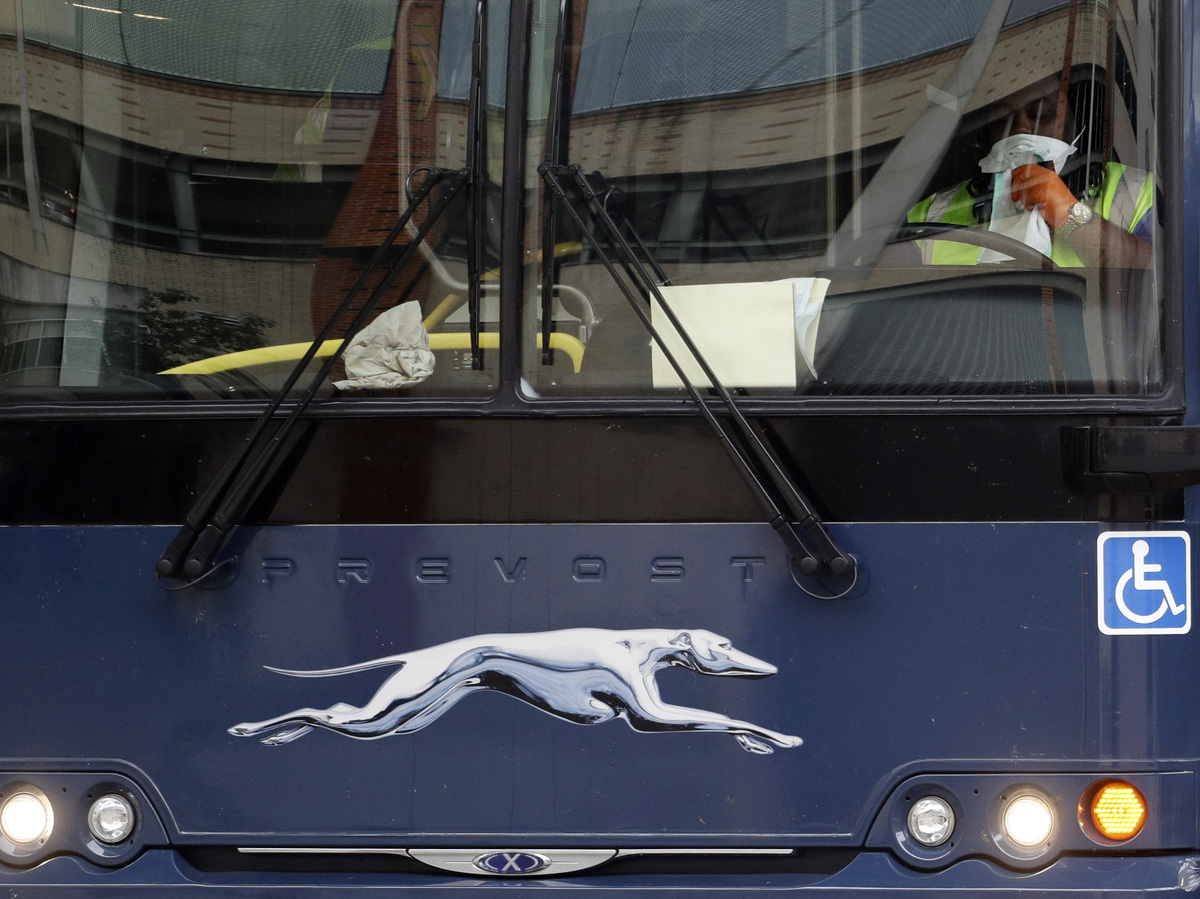 A Greyhound bus driver wears a protective mask and gloves as he prepares to depart a station in San Antonio, Texas, on March 30. Bus companies are struggling amid the pandemic, cutting off travel options for lower-income Americans.

The wheels on the nation's buses aren't going round and round very much these days.

Demand for bus travel has fallen by more than 80% during the pandemic as public health authorities urge people to avoid travel where possible.

That is raising concerns about the potential long-term damage to an essential transport method for millions of lower-income Americans even as air travel has shown signs of picking up since the Thanksgiving holiday period.

And those who have to take the bus, for whatever reason, are finding fewer options, and often higher prices as a result.

Feeling the pinch most are people such as Andrew Sarkis. He paid $97 for a one-way bus ticket from Hampton, Va., to New York City — a 12-hour journey that required two transfers.

"It's expensive, man," said Sarkis, while stretching his legs after his bus took a brief stop at Union Station in Washington, D.C.

Sarkis was on his way to visit family for Christmas but ended up with a half-day travel option on a Greyhound bus after finding his usual options in competing services pared down.

"The service is not bad," he said. "It's just long hours of traveling."

Greyhound said it's operating at less than half its normal bus routes during the pandemic, while revenues have fallen nearly 60%.

"Greyhound has been immensely impacted by the effects of COVID-19," the company said in a statement. "From temporary and permanent closures of routes to sudden workforce reductions, our ability to provide critical service to communities — especially those that are underserved and/or rural — has been reduced."

Industrywide, the service cuts are even deeper.

"We see the industry operating at about 10% capacity," said Peter Pantuso, president of the American Bus Association.

Coronavirus FAQ: Is It Safe To Get On The Bus (Or Subway)?

And it's hard to estimate how soon demand can pick up. Not many people are interested in riding the bus these days, which means spending hours with strangers in an enclosed space.

Unlike airlines, which saw an uptick in travel over Thanksgiving, demand for bus tickets remains severely depressed, according to Wanderu, a travel website.

That raises concerns about the long-term health of a sector that generally operates on thinner margins and has less financial cushion.

Pantuso estimates that 85% of the 100,000 people who work in the bus industry have been laid off or furloughed — in most cases since March.

It's not just long-haul services like Greyhound that are limping. Traffic on commuter lines that ordinarily ferry workers to and from the suburbs has also dried up, since many people are working from home.

Charter buses and specialty services are struggling as well.

The Nitetrain Coach Co. in Nashville offers tricked-out buses with bars and bunk beds for touring musicians. Since March, the company's 120-bus fleet has gone silent.

"It's been a hard time with concerts not happening," said Nitetrain's Angela Eicher. "No job. No income."

The company has idled more than 200 drivers as well as mechanics and office staff.

"We're at the mercy of the venues," Eicher said. "When the venues allow the concerts to start happening, that's when our buses will start rolling again."

Nitetrain did send a few of its buses to the Gulf Coast this fall to house utility crews cleaning up after hurricanes. Elsewhere, buses have been used to evacuate people from the path of wildfires.

And with less competition among bus companies, the few people who are buying tickets are often paying more. The Labor Department reported an 18% jump in intercity bus fares last month, even as overall inflation was tame.

While bus travel is still cheaper than other options, the extra cost can be a hardship for many riders.

"This is a mode of travel that caters to people often who can't afford cars — that need to go at the least possible cost from point A to point B," said Joe Schwieterman, a transportation expert who directs the Chaddick Institute for Metropolitan Development at DePaul University. "If prices jump, it might be out of reach."

But while Congress has offered billions of dollars in financial aid to airlines and Amtrak, bus companies have been overlooked.

Pantuso, the bus trade group president, said the lack of attention from Congress was a concern, calling his sector a critical piece of the nation's transportation network.

"If more members of Congress took the bus on a more regular basis," he said, "we'd probably be at the top of the list for funding."