Accessibility links
Dominion Voting Systems Official Is In Hiding After Threats The head of security for a voting equipment vendor speaks out from an undisclosed location where he's living after threats or harassment were directed to him and his family — even ex-girlfriends. 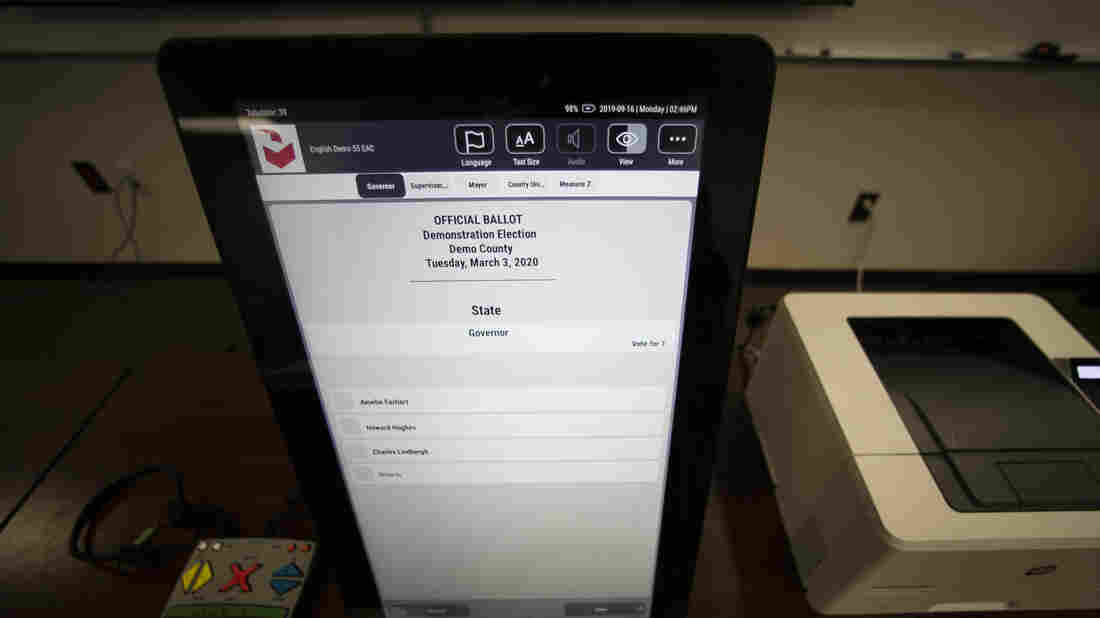 A sample ballot is shown via the Dominion Voting Systems that Georgians use to vote. John Bazemore/AP hide caption 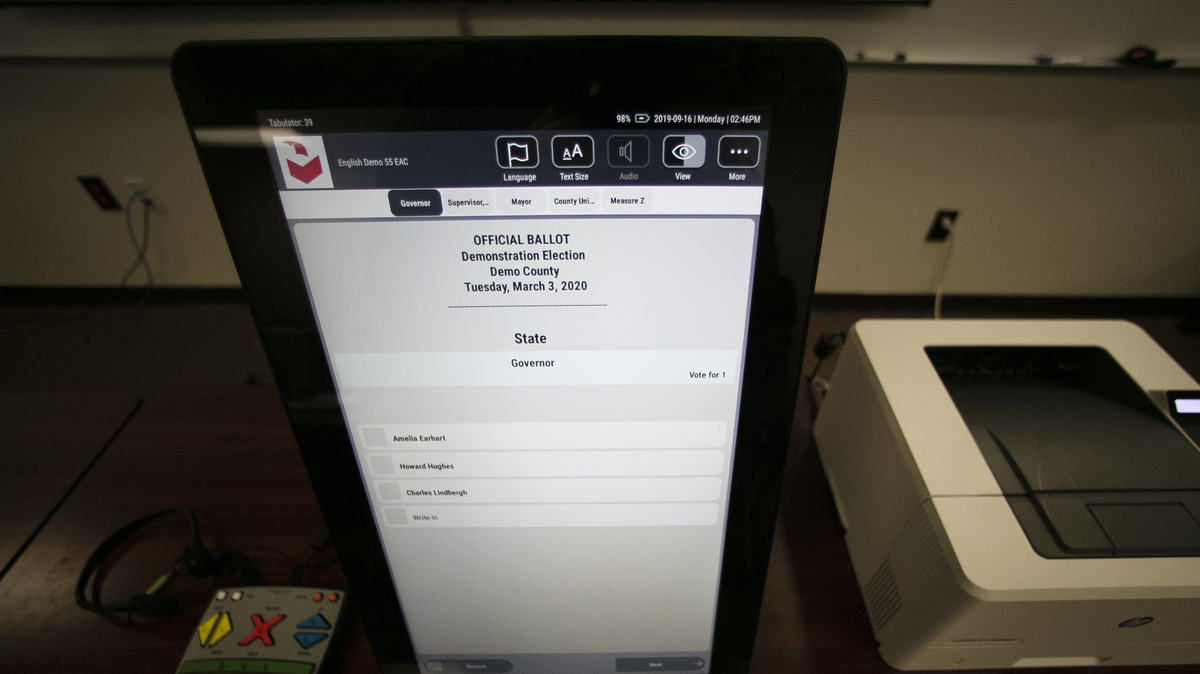 A sample ballot is shown via the Dominion Voting Systems that Georgians use to vote.

More than a month ago, Eric Coomer went into hiding.

The voting conspiracy theories that have led millions of Republicans to feel as though the election was stolen from them, which are still spreading, have also led to calls for Coomer's head.

Coomer oversees product strategy and security for Dominion Voting Systems, the Denver-based company that has suddenly found itself at the center of many of President Trump's false claims about November's election, spread by allies and pro-Trump media.

Some of Trump's supporters have focused on Coomer as the supposed evil mastermind.

"I actually am in fear for my safety," Coomer said recently, speaking by video call from an undisclosed location to Colorado Public Radio. "I'm in fear for my family's safety. These are real, tangible things coming out of these baseless accusations."

On Tuesday, Coomer sued the Trump campaign and a number of allies, alleging defamation.

It's just the latest example of how people's lives are being upended and potentially ruined by the unprecedented flurry of disinformation this year.

As people experience their own individual Internet bubbles, it can be hard to recognize just how much misinformation exists and how the current information ecosystem compares with previous years.

But companies that specialize in the subject said it is getting exponentially worse.

NewsGuard, which vets news sources based on transparency and reliability standards, found recently that among the top 100 sources of news in the U.S., sources it deemed unreliable had four times as many interactions this year compared with 2019.

The media intelligence platform Zignal Labs, in an analysis performed at NPR's request, found that misinformation narratives related to vote-by-mail systems alone were mentioned across the media spectrum more than 40 million times since Election Day.

That flood reached Dominion the week after the election, according to Zignal, and misinformation related to the company's machines has been mentioned more than 10 million times since then.

Coomer said in addition to his own information, the personal addresses of everyone from his parents and siblings to his ex-girlfriends have been posted online. Some have also received threatening letters.

"I've been threatened more times than I could even count. Whether it's the standard online trolls, voicemails that are left almost on a daily basis, being called a traitor to this country, I can't even begin to describe what effect this has had on my life," he said.

Dominion provides election equipment and software to 28 states, including many of the swing states on which Trump has focused his post-election ire.

In preparing for this November's election, the company gamed out all sorts of worst-case scenarios, but it wasn't on anyone's radar that Dominion and its employees could become the targets of threats.

Coomer said the first barb aimed at him came five days after the election.

The accusation started with a conservative activist in Colorado, Joe Oltmann. He claimed on his podcast that he'd infiltrated a call with Denver-area antifa members that included a man identified as "Eric from Dominion."

Oltmann claimed that Coomer said with a laugh on the call that he would make sure Trump didn't win the election.

"The minute I saw it, it left a big pit in my stomach," he said.

After that podcast went out, the threats quickly arrived. An online search turns up segments on the pro-Trump outlets Newsmax and One America News Network discussing the allegations as well as people accusing Coomer of treason and calling for him to be publicly executed. Those networks are among the defendants Coomer is suing.

"God is at the wheel, but we are the warriors that must do the work of men to repel evil," said one of numerous posts on the conservative social media site Parler.

A Dominion spokeswoman said other company employees have also gone to more secure locations, been threatened and been digitally stalked.

On Nov. 21, a group protested in front of Dominion's Denver headquarters, waving American flags and signs saying "fraud equals arrests." Social media posts from the event tagged the far-right group the Proud Boys. No one is currently working out of the building.

Recently, however, there are signs that elections companies, like some election officials, are pushing back against the false accusations.

In addition to Coomer's lawsuit, Dominion is threatening legal action against Sidney Powell, who has been among the loudest voices pushing conspiracy theories on behalf of the Trump campaign. Powell is named in Coomer's suit, along with the president's personal lawyer, Rudy Giuliani.

Smartmatic, a competitor of Dominion's that has also been the subject of wild rumors, has demanded that numerous news networks take back their allegations against it. This weekend, both Fox Business Network and Newsmax appeared to answer those demands with segments debunking some claims.

But election integrity advocates worry the disinformation won't truly begin to recede until political leaders such as Trump stop questioning the election's legitimacy.

Even in an election where almost all the voting was recorded on paper ballots and rigorous audits were done more than ever before, none of that helps if millions of people are working with an alternative set of facts, said Joe Kiniry, chief scientist of the open-source election technology company Free & Fair.

Even if an election is run perfectly, it doesn't matter to a sizable portion of the public who believes it was unfair. No amount of transparency at the county and state level can really combat the sort of megaphone that Trump wields, Kiniry says.

"When we're in the realm of coupling disinformation from both foreign and domestic sources, and government and nongovernment sources, and none of it is really grounded in reality ... evidence doesn't help much," he said.

For Coomer, that means his life may be forever changed.

His top goal right now is pretty simple — hoping one day it'll be safe to return home. But he has no idea if that will ever be possible.

"Some of the threats that I've gotten have made very clear that these actors are in it for the long haul. The wishes are that I forever have to look over my shoulder," Coomer said. "And I probably will."