Accessibility links
'Balloon Boy' Parents Pardoned By Colorado Governor for 2009 Hoax The incident captured the attention of many as authorities sought to save the boy, thought to be stuck in an airborne weather balloon. Later, authorities called the situation a hoax. 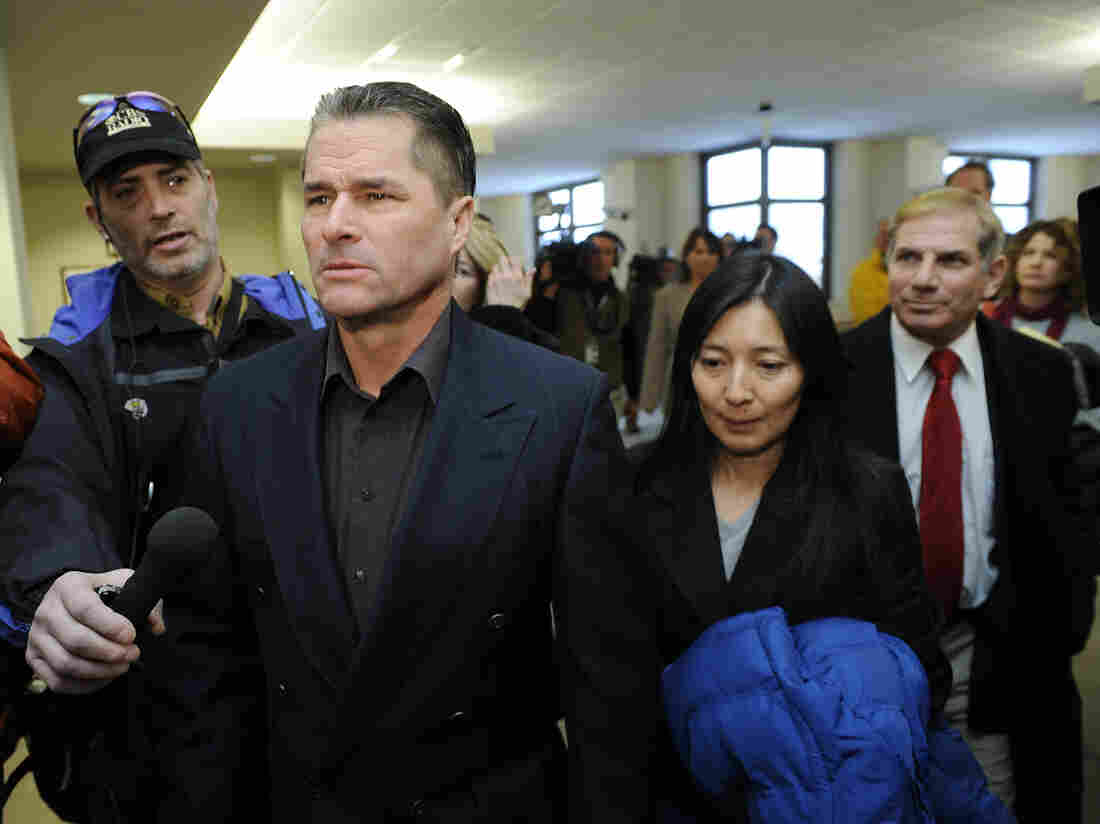 Richard and Mayumi Heene leave a Larimer County, Colo., courtroom after their sentencing hearing in 2009. Richard Heene was sentenced to 90 days in jail, 100 hours of community service and four years' probation for his part in the "balloon boy" hoax. His wife was sentenced to 20 days in jail and four years' probation. Chris Schneider/Getty Images hide caption 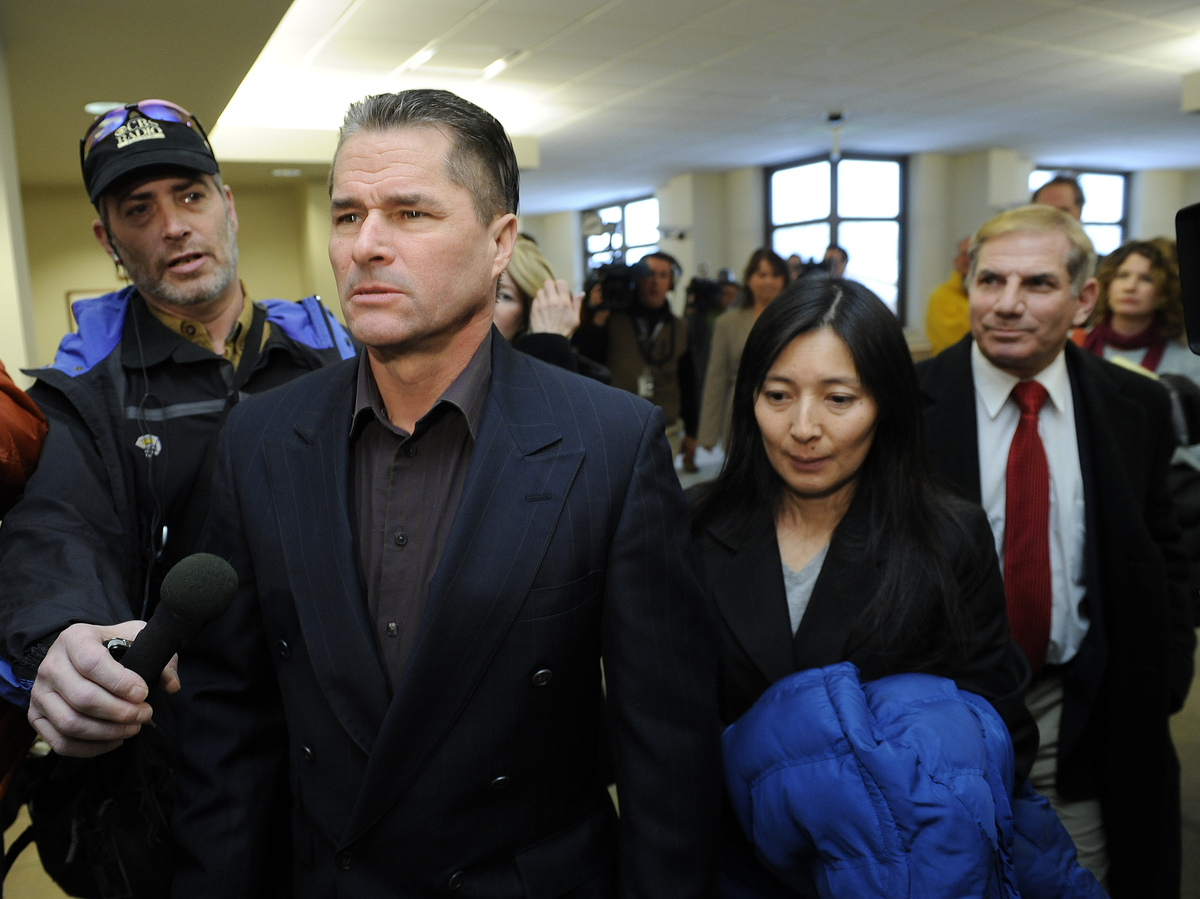 The so-called balloon boy incident captivated television audiences in 2009 as the parents of a 6-year-old — appropriately named Falcon — reported he had been carried away in a large, UFO-like balloon, thousands of feet in the air.

Falcon's parents, Richard and Mayumi Heene, told authorities he was accidentally carried thousands of feet into the sky in a homemade weather balloon experiment gone wrong.

But after the balloon landed, authorities did not find Falcon inside. Instead, he had been hiding in a box in the family attic the entire time.

It turned out to be a lot of hot air.

The parents pleaded guilty to a few crimes surrounding the incident after authorities said it was a hoax planned by the family. On Wednesday, Colorado Gov. Jared Polis pardoned the parents in the so-called balloon boy incident.

"In the case of Richard and Mayumi Heene, the 'balloon boy' parents, we are all ready to move past the spectacle from a decade ago that wasted the precious time and resources of law enforcement officials and the general public," Polis said in a statement.

"Richard and Mayumi have paid the price in the eyes of the public, served their sentences, and it's time for all of us to move on," he added. "It's time to no longer let a permanent criminal record from the balloon boy saga follow and drag down the parents for the rest of their lives."

The pardon scrubs the crimes from their records and will allow Richard Heene — who was convicted of a felony – to vote and pursue a general contractor's license.

"The balloonacy has ended," said David Lane, the family's longtime attorney, according to Colorado Public Radio.

"I commend the governor very strongly for realizing that despite all the public attention this case got, it was an unjust conviction. Given that, he recognized that you don't coerce people into pleading guilty, so he has pardoned them, to his great credit," Lane said.

Polis' statement did not question the integrity of the conviction, only saying the family deserved to move on. His office declined to comment further, per a request by Colorado Public Radio.

Despite pleading guilty in 2009, the parents maintain their innocence.

They argue that they pleaded guilty only to avoid a worse punishment. Mayumi Heene was not a U.S. citizen at the time, and the couple said they feared she would be deported.

Their three sons — Ryo, Bradford and Falcon — even defended the claims in an original heavy metal song titled "Balloon Boy, No Hoax."

"Ever had one of those days/ Where everything went wrong," now-teen Falcon Heene sang. "We told the truth/ The Sheriff lied."

The story begins to deflate

The family had the sympathy (and doubts) of many immediately following the incident. But their story began to unravel quickly after an interview on CNN's Larry King Live.

When asked why he was hiding, Falcon answered: "You guys said that we did this for the show."

The family — featured twice on the popular reality TV series Wife Swap — was accused of planning the stunt to garner fame.

"There is absolutely no doubt in our minds this was a hoax. It was a publicity stunt done with hopes of better maneuvering themselves for a reality TV show," Larimer County Sheriff Jim Alderden said in 2009.

The couple served stints in jail and were ordered to pay $36,000 in restitution to authorities. The judge also issued a unique punishment — the couple could not seek a way to monetize the experience whatsoever.

Colorado 8th Judicial District Chief Judge Stephen Schapanski blasted the couple during their hearing, telling them they "exploited their children, the media and the emotions of people all over the country for money."

"I'm very, very sorry. And I want to apologize to all the rescue workers out there," Richard Heene said at the time, although maintaining his assertion it wasn't a hoax.

He and his wife sought pardons from Polis a year ago, their attorney said. The governor pardoned or granted clemency to 21 others on Wednesday.