Accessibility links
The Age Of Earth's Oldest Ice Is a Mystery Ice is usually ephemeral; it doesn't last that long before melting. But some ice on our planet has stayed frozen for millions of years, according to scientists on a quest to find the oldest ice. 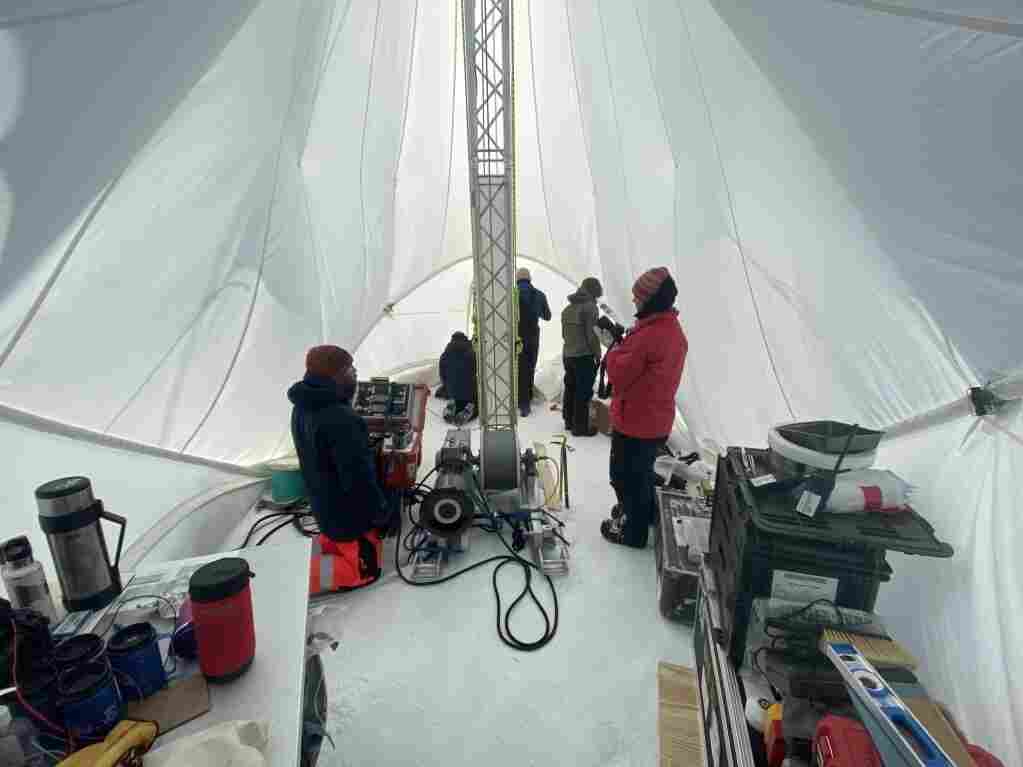 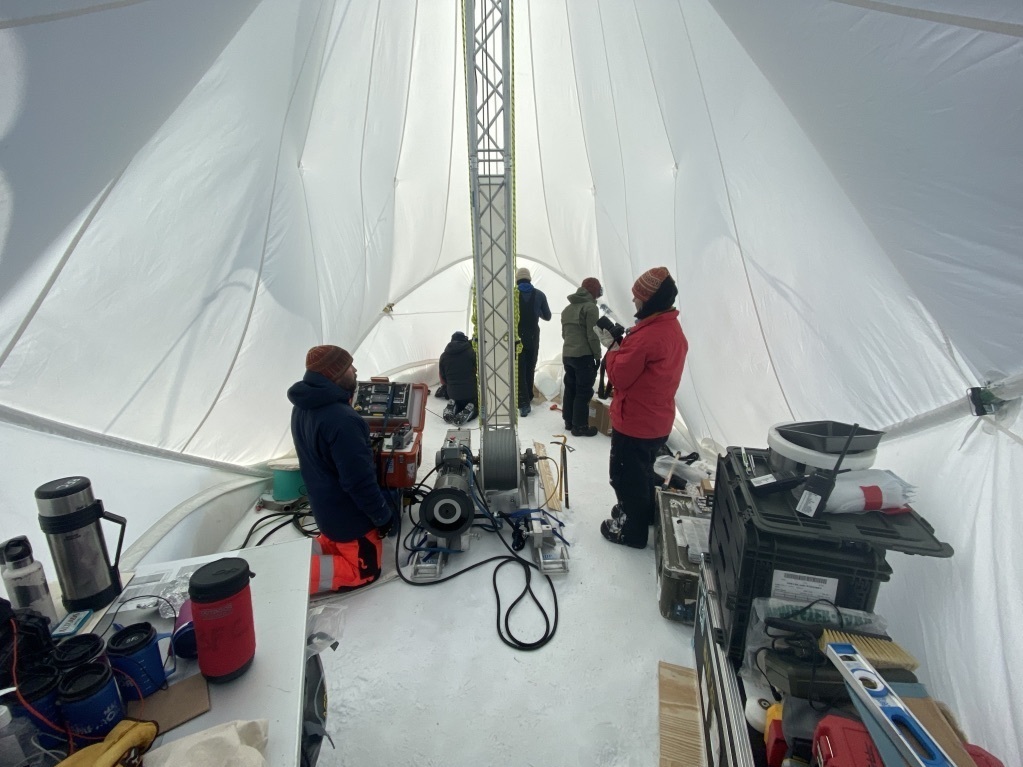 The oldest ice on Earth probably is hiding somewhere in Antarctica, because this frozen continent holds ice that's hundreds of thousands and even millions of years old. Scientists are hoping to find it.

But even the scientists hunting for old ice aren't sure how long the very oldest ice might have stuck around, says John Higgins, a geochemist at Princeton University.

"Would I be surprised at this point if we had 5-million-year-old ice?" asks Higgins. "I mean, I'd be surprised, but not it's not unfathomable."

One group has already claimed to have found 8-million-year-old ice in a buried glacier, establishing the age by dating volcanic ash on the ice, but some experts have their doubts.

Scientists Discover A New Form Of Ice — It's Square

The trouble is, he says, that particular ice sample is "a real mess" and of no use to scientists who are only after old ice because of something special trapped inside: little samples of ancient air from when the ice formed.

"When you pull out the ice, it essentially is crystal clear except it's filled with tiny bubbles," explains Higgins. He considers those bubbles to be the next best thing to having a time machine that would let scientists go back and directly collect the past air.

Higgins and some colleagues recently drilled an ice sample in the Allan Hills region of Antarctica that was later shown, by analyzing trace amounts of the gas argon, to be as old as 2.6 million years old. In his view, that's "the oldest thing that I think we have high confidence in the age of the ice and the age of the air that's trapped in the ice."

A slightly younger 2 million-year-old sample found nearby was pristine enough to use its bubbles to measure important greenhouse gases like carbon dioxide and methane, providing a snapshot of the atmosphere back then that challenged scientists' previous assumptions. 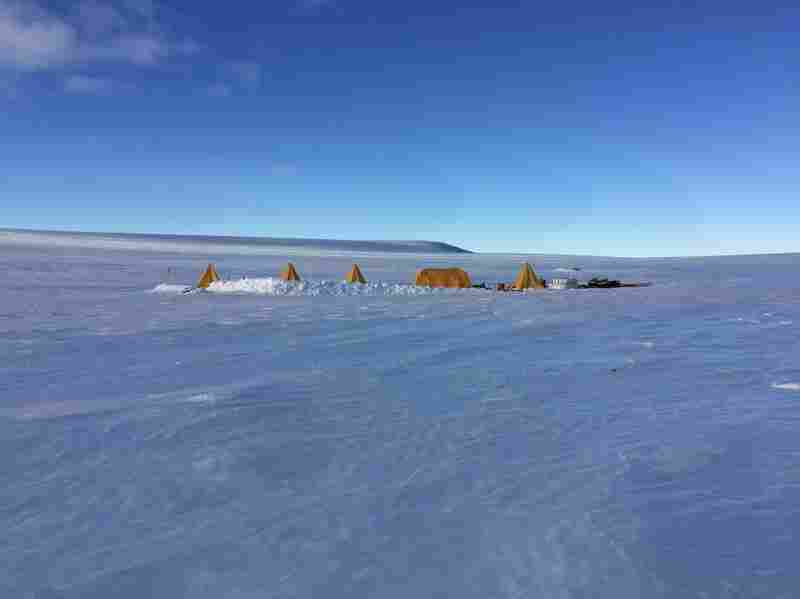 Field teams of scientists and ice core drillers spent up to eight weeks living in tents in Antarctica from late 2015 to early 2016 and again in 2019 to 2020. John Higgins hide caption 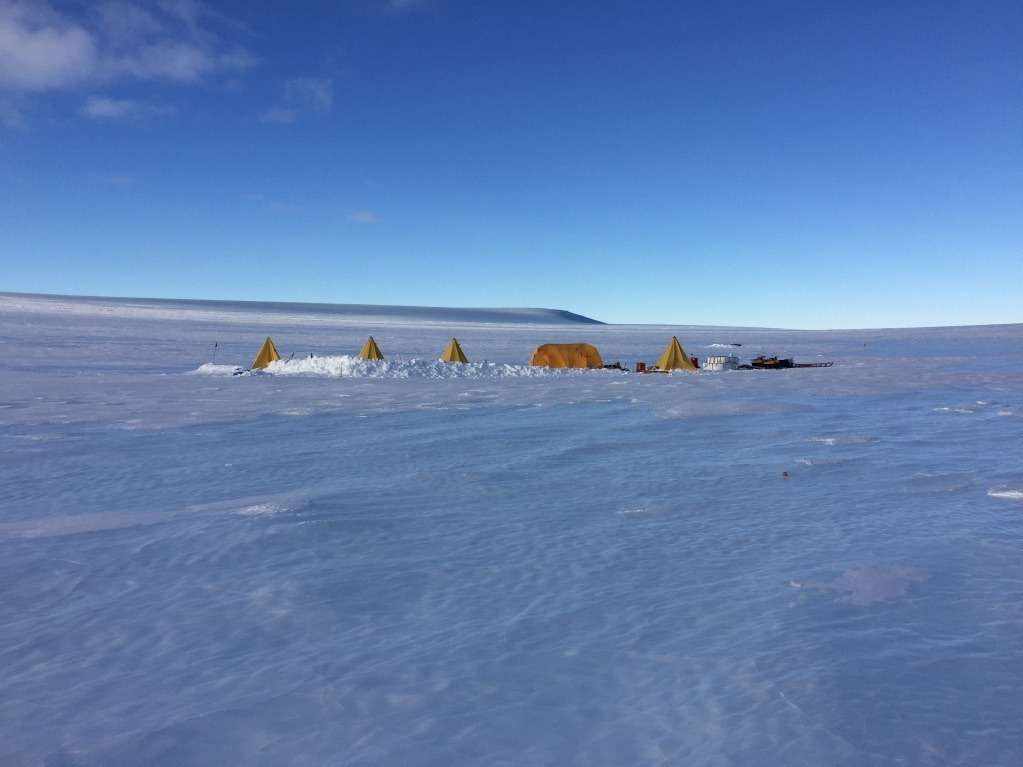 Field teams of scientists and ice core drillers spent up to eight weeks living in tents in Antarctica from late 2015 to early 2016 and again in 2019 to 2020.

Understanding how carbon dioxide levels have changed over Earth's history could help climate researchers understand how human activities will warm the planet in the future. "One of the biggest questions about modern warming and anthropogenic climate change is how much warming should we expect with the amount of CO2 in the atmosphere," says Sarah Shackleton, another researcher at Princeton University.

She sometimes melts extremely old ice in the lab and watches as the ancient gasses bubble up through the liquid, which she calls "mesmerizing."

"One thing that's really surprising to me, every time, is how much gas is in the ice," Shackleton says, adding that atmospheric gases make up about 10% of the volume of glacial ice.

Ever wonder HOW scientists sample ancient air in 🧊? We melt it! The air is then transferred under vacuum and analyzed for its chemical composition. This sample is from the Allan Hills 🇦🇶 and is currently being measured by Dr. Sarah Shackleton. How old is it? Stay tuned! pic.twitter.com/Zw4Xzdliq7

All of this is why researchers are so keen to find ice from key time points in Earth's climate history, such as periods of unexplained changes to warming and cooling cycles.

An ice sheet has covered Antarctica for at least 30 million years, but it's still challenging to find very old ice.

Snowfalls constantly add new layers of ice to the top of the Antarctic ice sheet. The oldest layers down below, however, can melt away because of geothermal heat coming up from the ground.

"The rocks are giving off heat slowly over time, so that has the potential to melt ice at the bottom," explains John Goodge, a geologist at the University of Minnesota.

Still, bits of old ice — like that 2.6 million-year-old sample — can sometimes be preserved at the ice sheet's edges.

"The oldest snippets of ice we'd been able to find come from places where the ice has flowed up a mountain range and been exposed at the surface," says Goodge.

In those places, though, the ice can be messy and all jumbled up, or found in isolated pockets. It's not in nice layers that have been laid down sequentially over a continuous stretch of Earth's history.

To get that kind of neatly layered ice sample, scientists need to drill straight down through the thick Antarctic ice sheet. So far, the oldest ice collected that way goes back 800,000 years.

Now, several groups from around the world want to drill down to ice that's even older, more than 1.5 million years old.

"Whether or not we'll be able to find it at the bottom of the ice sheet, where we can recover a relatively simple continuous record, I guess that's the $64,000 question," says Goodge.

Drilling through nearly 2 miles of solid ice is difficult and will take several years, he notes, which makes it important to target the most promising spot.

A European project has already picked a barren place called "Little Dome C," where the temperature is always below -13 degrees Fahrenheit.

Barbara Stenni of Ca'Foscari University thinks there's "a good possibility" of finding ice 1.5 million years old or older at this location, and she points to results from an ice-penetrating radar survey that support that idea. "The physical evidence tells us that this ice is probably there," she says.

Meanwhile, researchers from China have been drilling deep for old ice at a place called Dome A. "That one may or may not succeed," says Jeffrey Severinghaus of the Scripps Institution of Oceanography, University of California, San Diego, explaining that the site was picked because it's close to a research station. "It wasn't really chosen with the aim of getting the sort of best possible old ice site."

He has been working with Goodge to develop a new kind of rapid drill that can chip through the ice sheet quickly, in days rather than years, so that researchers can assess different places before committing to more elaborate and expensive drilling.

"It was my feeling that the actual existence of very old ice at the bottom of the glacier would be extremely difficult to predict ahead of time with conventional methods like radar and stuff like that," says Severinghaus.

With their drill, it will be possible to make multiple holes and run tests on ice at the bottom, he says, so "you'd know for sure that the old ice existed." 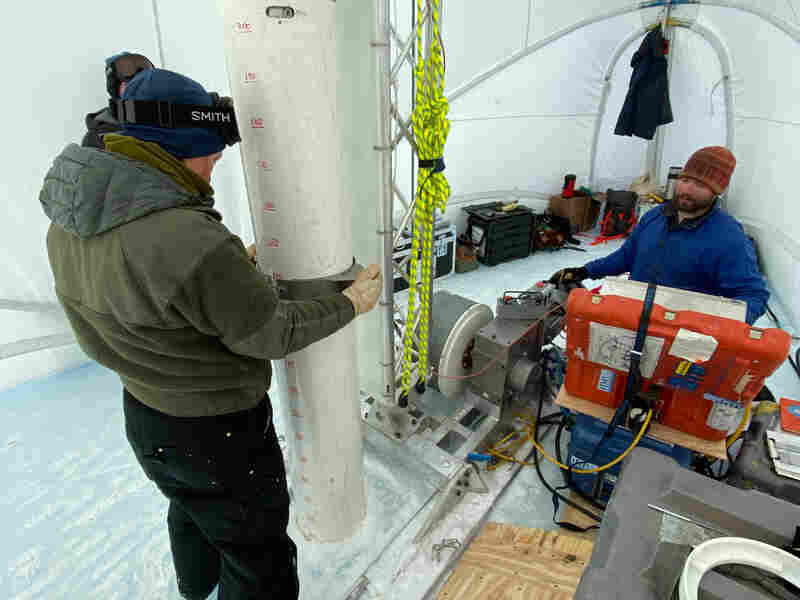 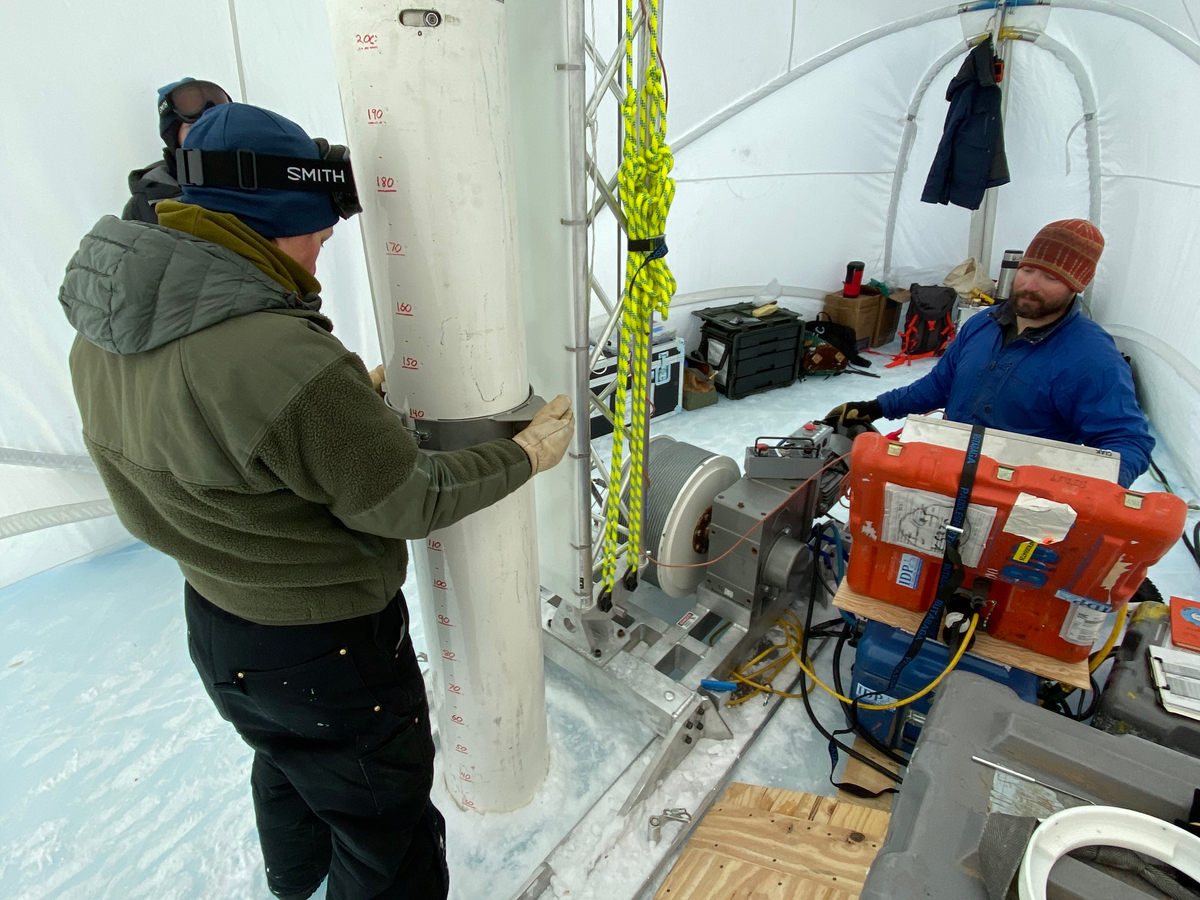 The coronavirus pandemic has delayed his team's work — indeed, the virus forced researchers to call off almost the entire Antarctic field season. But in fall of 2021, the hunters of old ice will be back.

If any of these efforts eventually let scientists get a continuous sequence of ice layers going back 1.5 million years or more, they'll be able to understand atmospheric changes that occurred during an important climate switch.

About a million years ago, there was a dramatic shift in the planet's cycle of ice ages. Those had been coming every 40,000 years or so, but for some reason, that pattern ended — and it changed to every 100,000 years instead.

Glaciers clearly come and go because of influences that are not well understood, agrees Severinghaus, who thinks "we ought to know about those in order to predict our future."

While some of those mysteries might be solved by drilling continuous ice cores that go back 1.5 million years or finding isolated fragments of ice as old as 5 million years, he says, "There's no reason why we couldn't get lucky and find something even older."