Accessibility links
Anti-Nuclear Activists Face Prison After Breaking Into Naval Base In the midst of a pandemic that's wreaking havoc on prisons and disproportionately affects older people, activists known as the Kings Bay Plowshares have been sentenced to up to 33 months in prison. 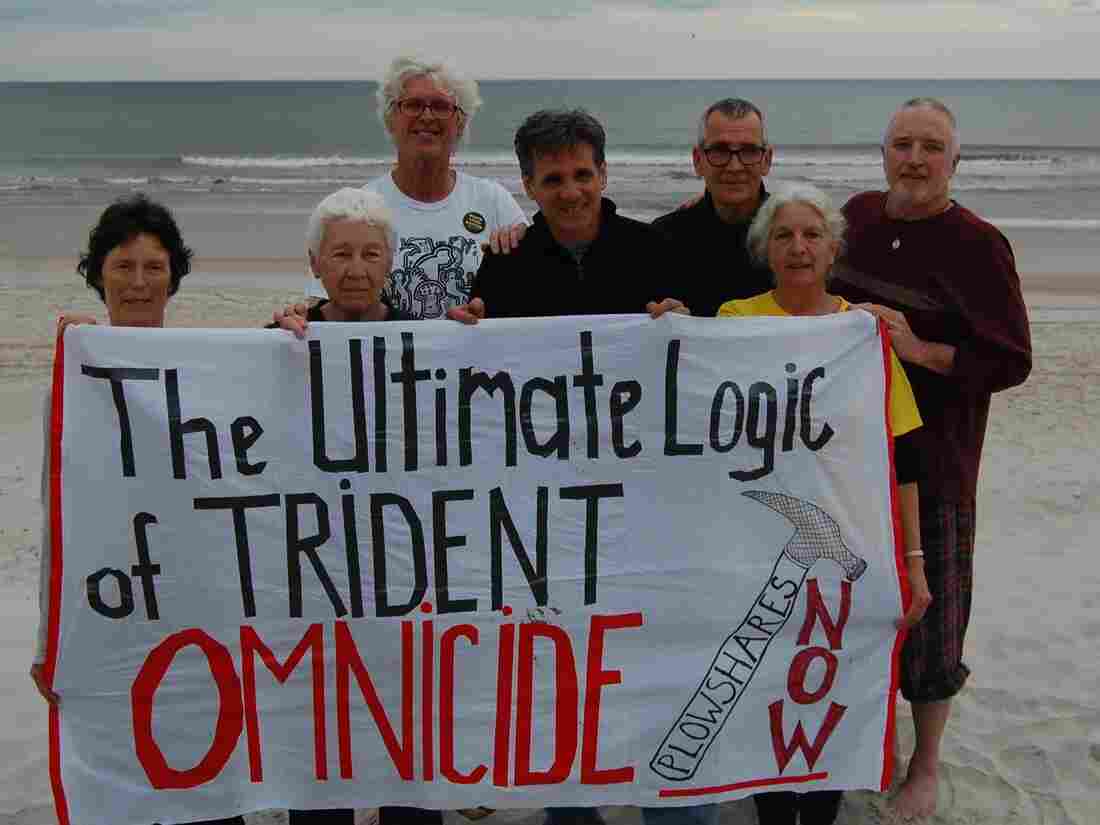 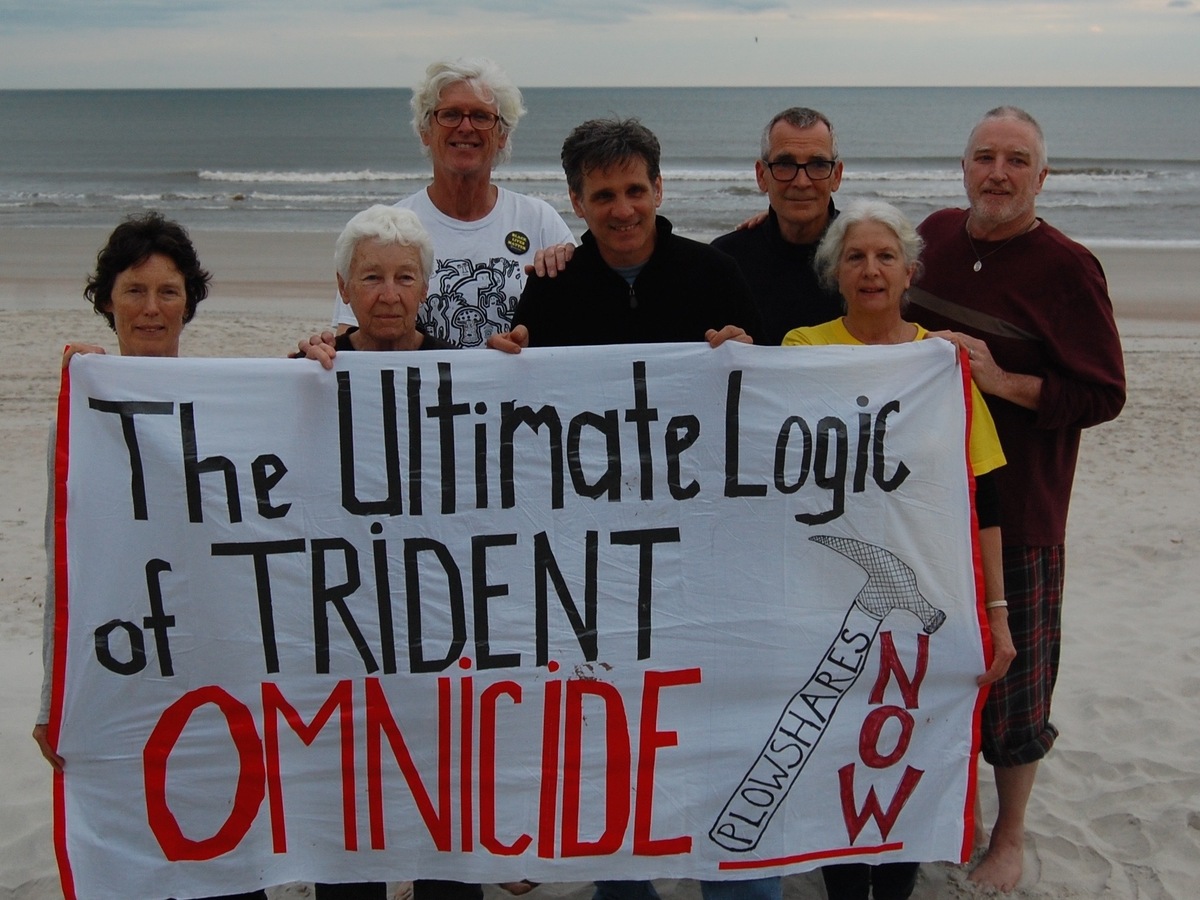 Seven Catholic activists, known as the Kings Bay Plowshares, broke into a naval submarine base in Georgia on April 4, 2018.

Dressed in black, the seven intruders cut through a fence and stole along the perimeter of the naval base, trying to avoid detection from the guard towers, as a loudspeaker overhead blared: "Deadly force is authorized!"

Patrick O'Neill, who had a GoPro strapped to his head, tried to reassure himself by remembering a scene in the Bible where Jesus escapes unscathed from a wrathful mob that wants to throw him off a cliff.

When O'Neill and the others reached their target, they poured their own blood on the shield of the Kings Bay naval base in Georgia and attached a poster of Martin Luther King Jr. to a mock-up of a Trident II D5 ballistic missile at the welcome area.

The anti-nuclear activists — Roman Catholics who call themselves Plowshares, from the Biblical passage about "beating swords into plowshares" — followed the metaphor quite literally and took a hammer to the replica of the warhead.

"When you think of idolatry, that's exactly what I think of: statues of nuclear weapons," O'Neill said later. "I mean, my God, you're gonna build a statue for something that if it's used would blow up a whole city full of people. This is your idea of welcoming people? I mean, it's sick."

The break-in on the night of April 4, 2018, ended with the arrest and conviction on charges of trespassing and destruction of property for the seven activists aged 58 to 81.

And in the midst of a pandemic that's wreaking havoc on prisons and disproportionately affecting older people, six of them have been sentenced to up to 33 months in prison. The seventh is scheduled to be sentenced in February.

The Plowshares activists were seeking to revive the anti-nuclear movement by committing acts of civil disobedience. 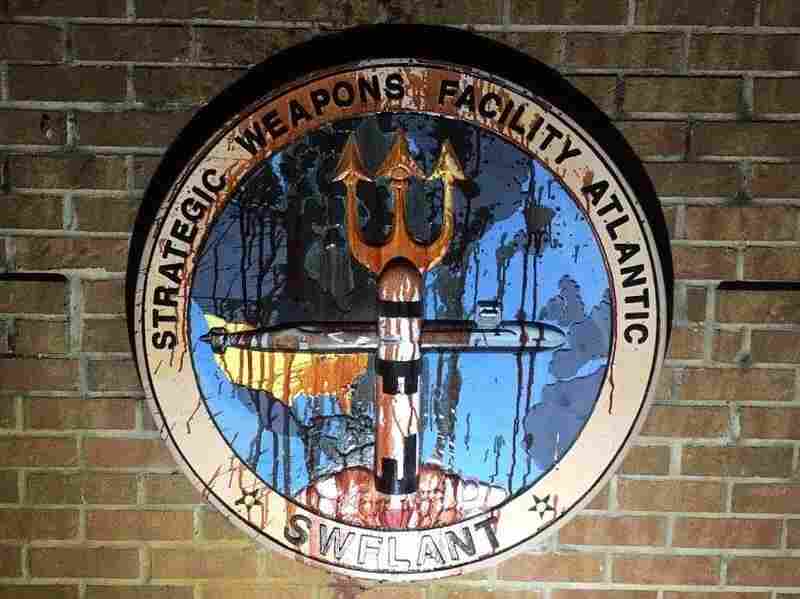 The protesters poured bottles of their own blood on the naval base shield at Kings Bay. Kings Bay Plowshares hide caption 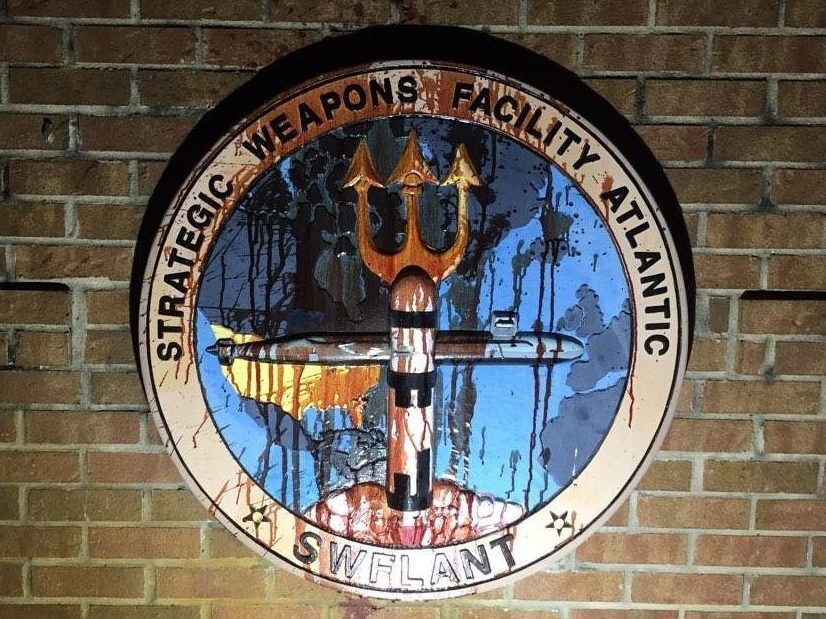 The protesters poured bottles of their own blood on the naval base shield at Kings Bay.

They are part of a larger faith-based movement that has been around since the 1980s, when anti-nuclear protests used to draw millions into the streets.

Those days are long gone, but the threat of nuclear warfare isn't. According to some atomic scientists, the threat may be even greater now, and the activists are frustrated that in their view hardly anyone is paying attention.

Which is one reason why they have broken into military bases and sometimes succeeded in doing damage to actual nuclear armaments. In a highly publicized protest in 1980, Plowshares activists hammered two missile nose cones at a General Electric complex in King of Prussia, Pa., causing tens of thousands of dollars worth of damage. In 2012, another group that included an 82-year-old Catholic nun defaced a bunker holding weapons-grade uranium at the Y-12 National Security Complex in Oak Ridge, Tenn.

"People are always astounded that a bunch of old people or unarmed people or whatever people can gain access to these weapons at all," said O'Neill, 64. 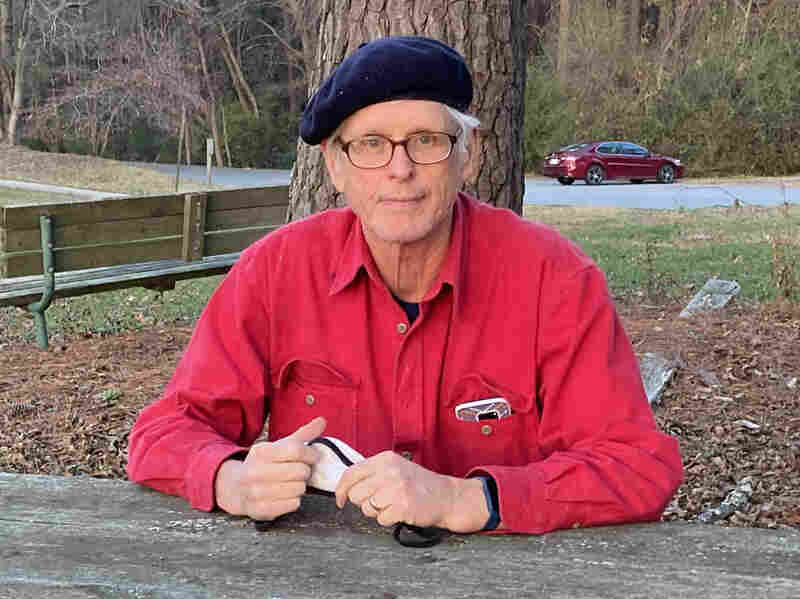 Patrick O'Neill, 64, is a member of the Kings Bay Plowshares. He reports to prison in January for a 14-month sentence. Emma Peaslee/NPR hide caption 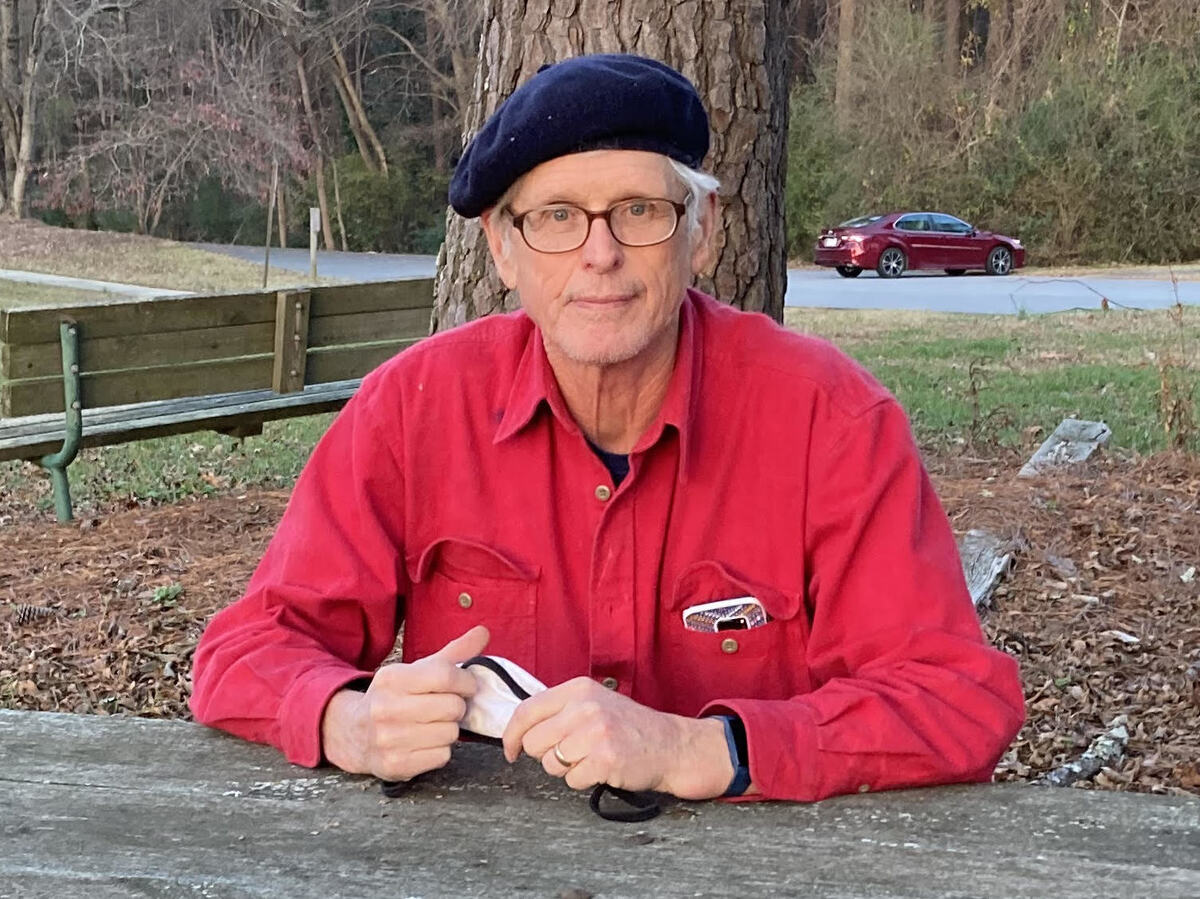 Patrick O'Neill, 64, is a member of the Kings Bay Plowshares. He reports to prison in January for a 14-month sentence.

Martha Hennessey, 65, had already been to prison three times before beginning her sentence at a federal prison in Danbury, Conn., on Dec. 14. She is the granddaughter of the journalist-turned-activist Dorothy Day, who founded the pacifist Catholic Worker Movement in the 1930s.

Rather than dwell on her own sentence, she drew attention to the mass incarceration of people who have committed minor offenses.

"I mean, there are people being thrown into prison for years for, you know, things that are not even crimes," she said in an interview before reporting to prison.

Members of the Plowshares group prefer not to talk about the risks they might face in prison, but their families are worried.

"I'm afraid that my dad might die in prison," said Maura O'Neill, 26, one of O'Neill's eight children. "I worry that he might contract COVID and get really sick, and it feels like a real possibility."