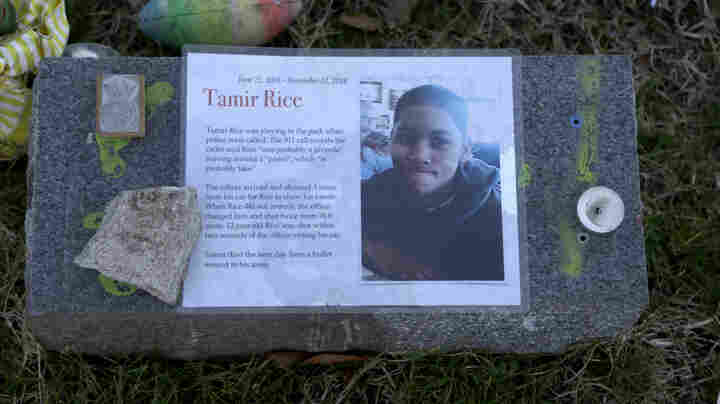 The Justice Department announced Tuesday it would not bring federal criminal charges against two Cleveland police officers in the 2014 killing of 12-year-old Tamir Rice (pictured in a memorial). Jacqueline Larma/AP hide caption 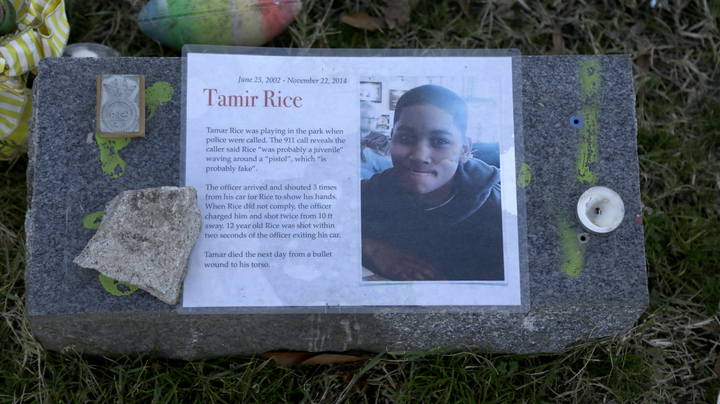 The Justice Department announced Tuesday it would not bring federal criminal charges against two Cleveland police officers in the 2014 killing of 12-year-old Tamir Rice (pictured in a memorial).

The U.S. Department of Justice will not charge any of the officers involved in the fatal shooting of Tamir Rice, a Black 12-year-old boy who was killed by police in Cleveland in 2014. The department has closed its investigation.

In a statement released Tuesday, the department said it notified Rice's family attorneys about the decision on Monday "and today sent a letter to Mr. Rice's family explaining the findings of the investigation and reasons for the decision."

Video footage of the killing, which happened in daylight on Nov. 22, 2014, shows the child was shot within two seconds of the police arriving at the scene. Loehmann, who fired two bullets into Rice, and Garmback allege they believed he was carrying a gun. In fact, the boy was playing with a toy air pellet gun near a playground at a city recreation center.

The officers were responding to a 911 call during which the caller said there was a man — "probably a juvenile" — pointing a gun — "probably fake" — at people on the playground. However, the dispatcher failed to relay to the responding officers the fact that the subject of the call was likely a child with a toy.

Rice died early the next morning at a Cleveland hospital.

Outrage over the boy's death, which followed that of Eric Garner at the hands of New York City police in July 2014 and Michael Brown's death in Ferguson, Mo., that August, was a leading narrative in the nascent Black Lives Matter movement that has emerged as a national call for police reform.

There were no prosecutions in the case. In December 2015, a grand jury declined to bring criminal charges against Loehmann and Garmback.

The statement noted Loehmann and Garmback were the only two witnesses in the near vicinity of the shooting.

Loehmann was fired nearly three years after Rice's death for lying on his application to the Cleveland police.