Accessibility links
In 2020, Protests Spread Across The Globe With A Similar Message: Black Lives Matter Journalists based in Colombia, South Africa and Indonesia talk about how the Black Lives Matter movement inspired activists abroad this year. 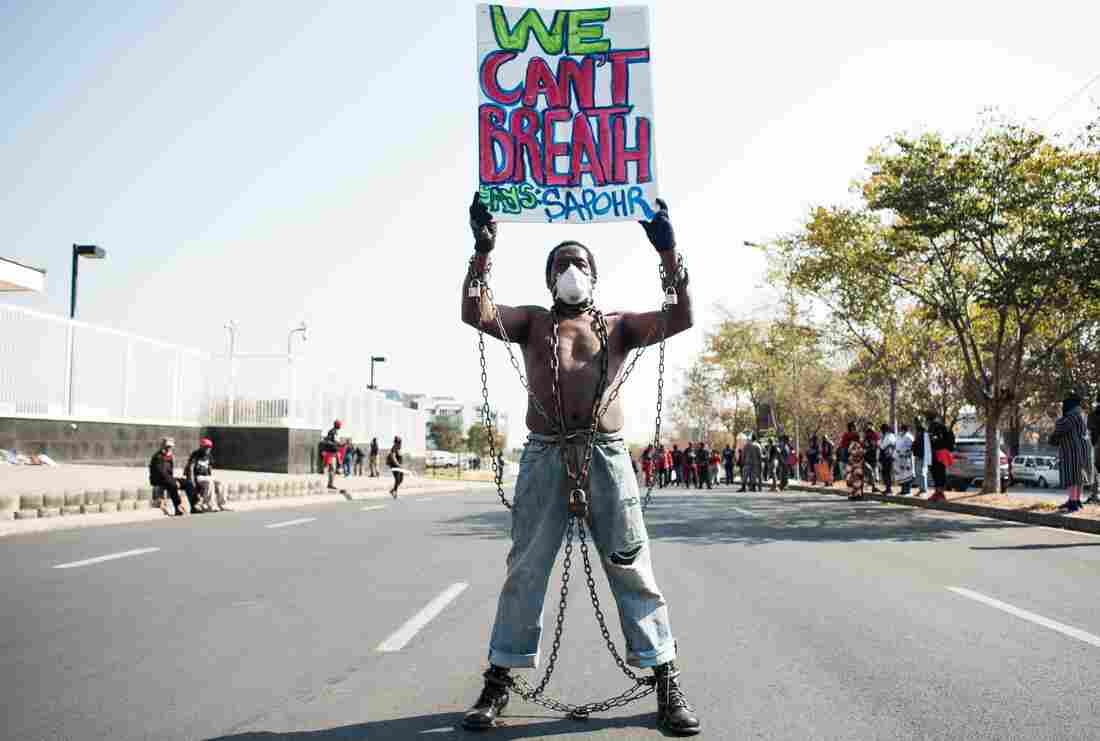 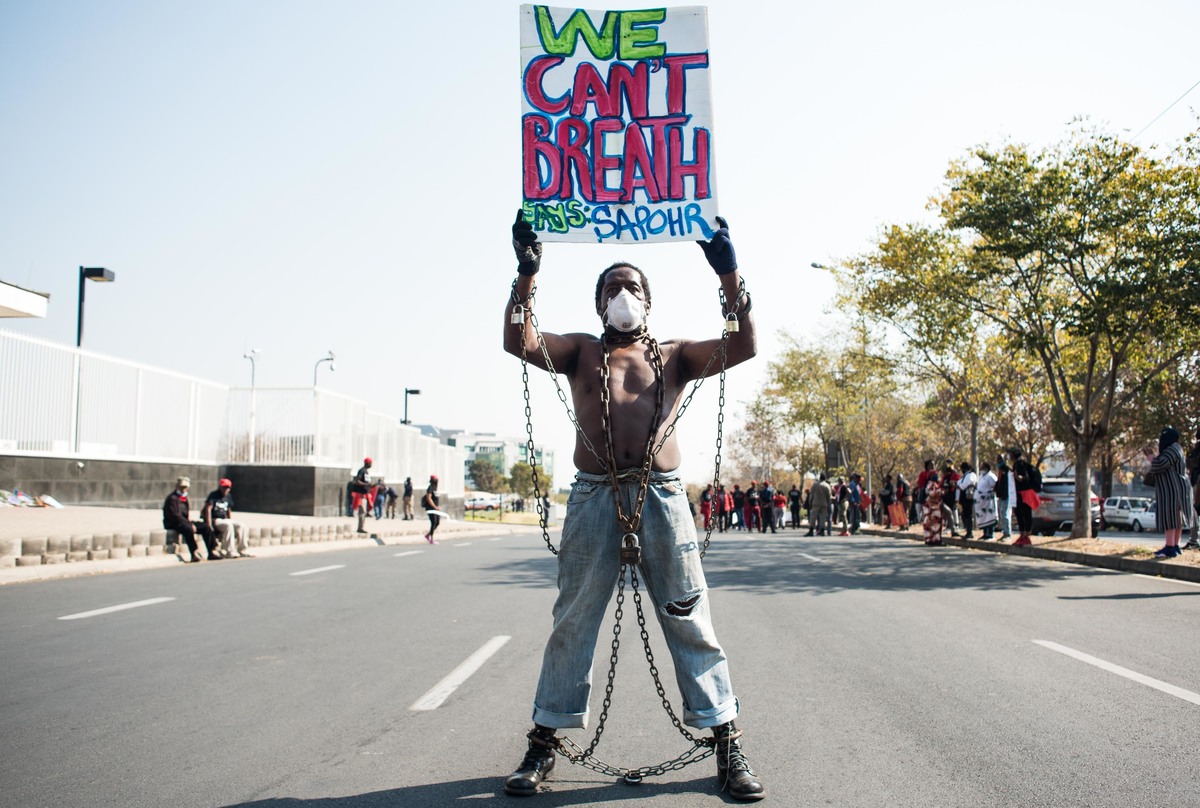 Members of Economic Freedom Fighters (EFF) protest against the death of George Floyd outside U.S. Consulate in solidarity with Black Lives Matter movement on June 8, 2020 in Sandton, South Africa.

The Black Lives Matter movement became an international phenomenon in 2020. As protesters took to the streets in cities across the U.S. in the aftermath of the police killing of George Floyd, a Black man in Minneapolis, Minn., so did demonstrators in other countries — all with a similar message: Black lives matter.

"There is a George Floyd in every country," South Africa-based journalist Lynsey Chutel tells NPR's David Greene during a recent roundtable interview.

Demonstrations spread across Colombia in June. They were sparked by the May killing of a young Black man named Anderson Arboleda in Puerto Tejada, who was allegedly beaten to death by police for breaking pandemic rules. Activists called for justice for Arboleda and other young Afro-Latino men killed by police.

From Murals To Tweets: The Global South Shows Solidarity With George Floyd Protests

The Global Legacy of George Floyd

"This message of this movement — Las Vidas Negras Importan — of Black Lives Matter, were young Afro-Colombians who wanted to speak out against police brutality and structural racism," Gonzales says. Like much of Latin America, Spanish colonialism informs many societal divisions in Colombia today, she says.

Yet, most Colombians don't seem to want to talk about racism and colorism, she says. In the most recent census, a majority of Colombians identified as "no race" and "until we acknowledge this debate, we can't change things," Gonzales says.

In South Africa, demonstrators came together following the police killing of 16-year-old Nathaniel Julies, a boy of mixed heritage with Down syndrome. Julies was shot and killed in August by police near his home in a neighborhood of Soweto allegedly for being outside his home during a pandemic lockdown. Chutel says that in the days after young people marched to the police station out of a sense of "deep frustration with this police station and the police force in general who are able to behave with impunity." 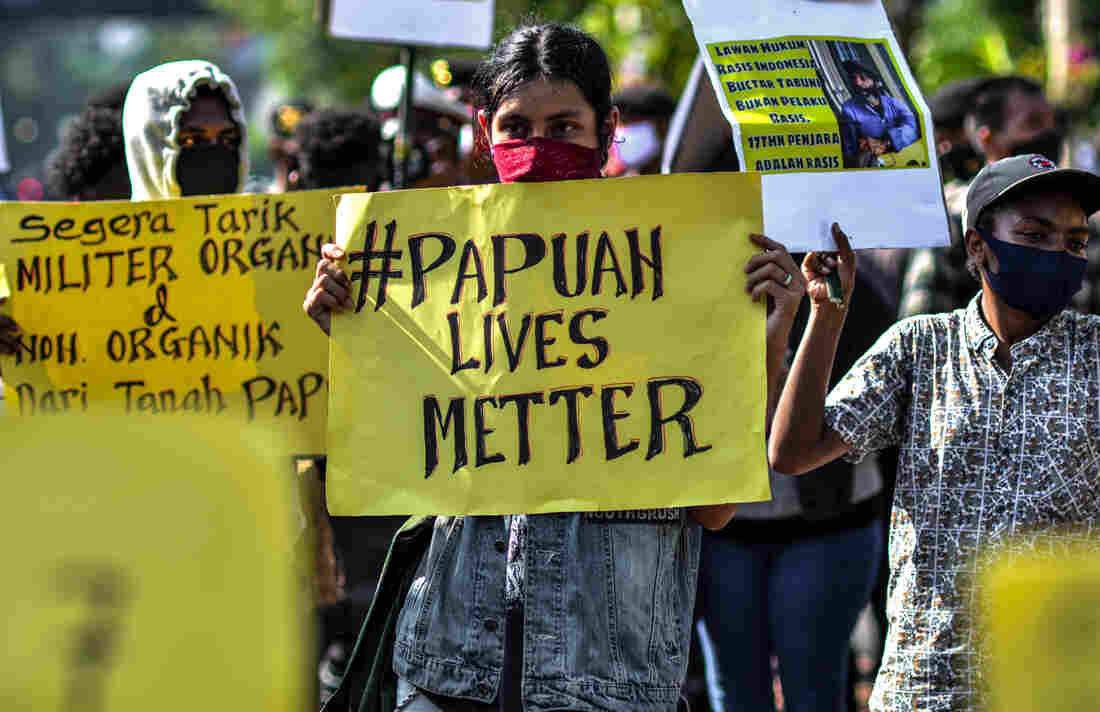 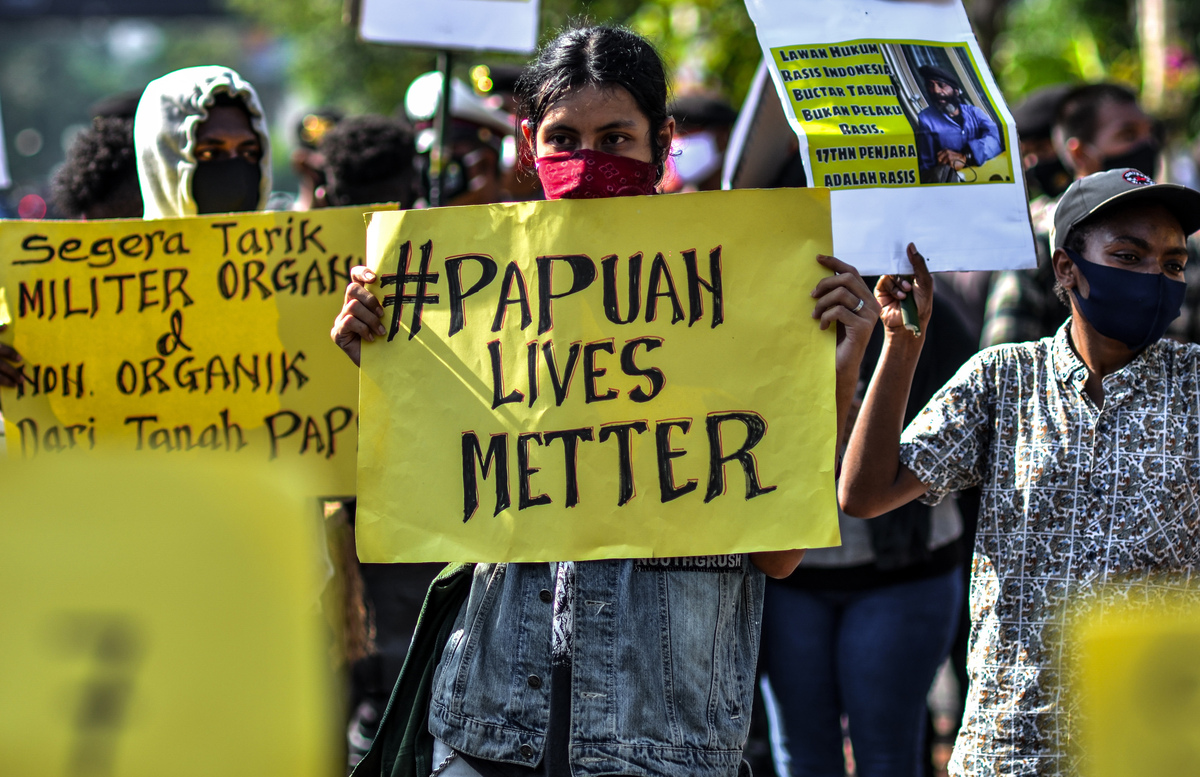 Alliance of Papuan Students are seen protesting in Surabaya, Indonesia, on June 16, 2020.

"If you have a police system that was used as the foot soldiers of the apartheid regime, where even though now the police are Black and the communities are Black the culture of policing it still very much that authoritarian, militarized policing system," says Chutel. She says that while protesters directly borrowed some language from the U.S.-based Black Lives Matter Movement, they also made their message uniquely South African by incorporating the phrase "Colored Lives Matter." The word colored, she explains, is an old apartheid segregationist term used to describe someone of mixed heritage in South Africa.

Activists in Indonesia inspired by the Black Lives Matter movement also made the message their own. The phrase #AllPapuanLivesMatter went viral, calling attention to the decades-long secessionist movement in West Papua, which has created tensions between the minority Papuans and ethnic Javanese-majority in the country.

"It's hard for West Papuans to find a rent house [sic] because they always get rejected," Firdaus says. "The landlord literally says it's because they are Black and they are Christian. We are majority Muslim."

Firdaus says ever since Jakarta took control of West Papua from the Dutch in the 1960s as part of the New York Agreement, Indonesia has never allowed Papuans to integrate fully into society. But the #PapuaLivesMatter message might be a turning point "because many young Indonesians right now feel they are emotionally involved with this issue," Firdaus says.

To hear the conversation, press the audio button above.

Ashley Westerman edited and Ryan Benk produced the broadcast version of this story.