Accessibility links
As Statues Of America's Racist Past Were Removed In 2020, So Were Tattoos 2020 saw an unprecedented number of statues and other symbols related to America's racist past removed. People with racist tattoos followed suit, by getting their tattoos covered up. 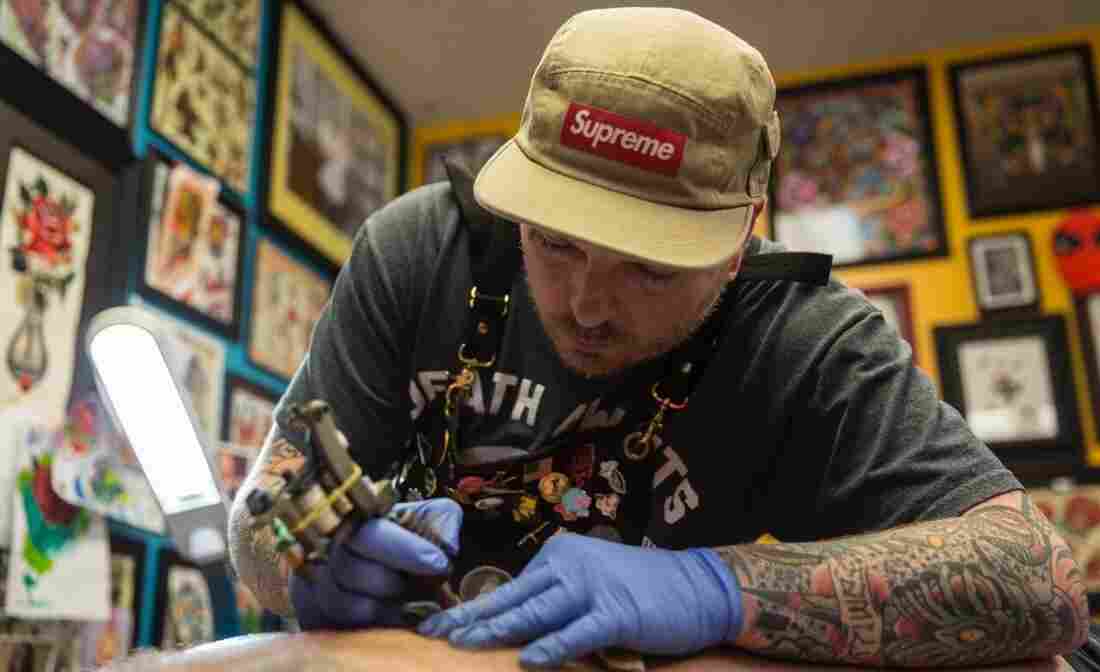 Billy White, owner of Red Rose Tattoo in Zanesville, Ohio, will cover up people's previous racist tattoos. But first he ensures it reflects a genuine change in ideology. He's seen more interest in covering up tattoos this year than before. Cy Dodson, director of Beneath the Ink hide caption

toggle caption
Cy Dodson, director of Beneath the Ink 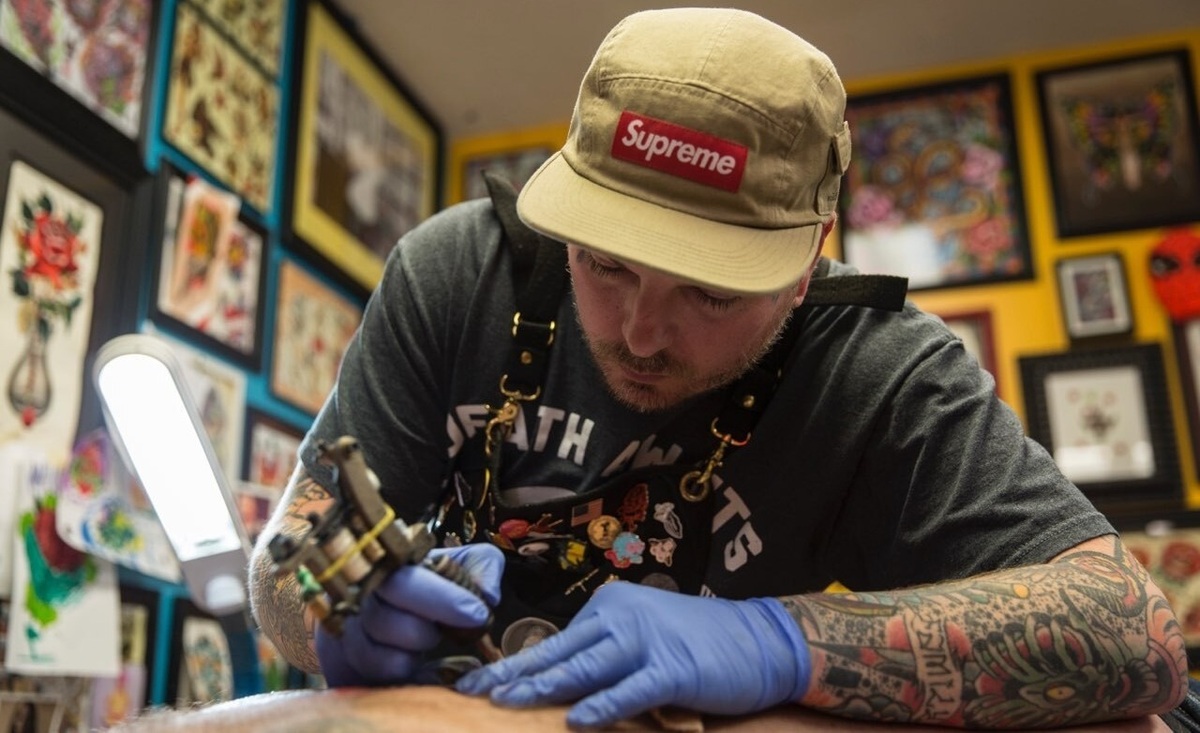 Billy White, owner of Red Rose Tattoo in Zanesville, Ohio, will cover up people's previous racist tattoos. But first he ensures it reflects a genuine change in ideology. He's seen more interest in covering up tattoos this year than before.

Cy Dodson, director of Beneath the Ink

The year of large racial justice protests led to an unprecedented number of Confederate symbols being removed around the country.

More than 100 Confederate symbols have been removed from public spaces or renamed since George Floyd was killed, according to a count by the Southern Poverty Law Center.

And in a similar reckoning, tattoo artists around the country say that as protests took off this year, requests to remove or cover up racist tattoos did, too.

Kyle Boykin was 17 when he got a tattoo of the Confederate flag that covered his upper arm. "Growing up in rural, small-town Ohio, that was kind of the cool thing," he says. To him, it was about being proud of his family's history in the South.

But as Boykin got older, he began to understand that as a white man, the same Confederate flag that to him represented pride held dark reminders of slavery and white supremacy for many Black Americans.

Boykin says he was careful to wear sleeves long enough to cover his tattoo at work. He is a safety supervisor for the transit agency in Zanesville, Ohio, where he has lived his entire life.

"I work with everybody, of all races, sexes, everybody, rich to poor," he says. "... I never wanted somebody that I was trying to lend a hand to in the community to, for any reason, feel uncomfortable by anything I had on my body that was never meant for that purpose."

A few years ago, he got the words "Heritage, Not Hate" added to the tattoo to clarify his intentions.

Then came George Floyd's killing in May, which was the "initial wow factor moment" for Boykin.

The nationwide protests even came to Zanesville in the summer as people gathered peacefully at the county courthouse and marched through town.

Boykin recalls covert, "subliminal" racism from white people in his town toward people of color when he was growing up. He watched the demonstrations closely, awaiting counterprotesters and violence.

"That didn't happen, which really surprised me that [protesters] weren't met with any kind of opposition, which to me was a clear indicator that times are definitely changing," he says.

It was the final push to get his Confederate flag covered up. Boykin wasn't alone. 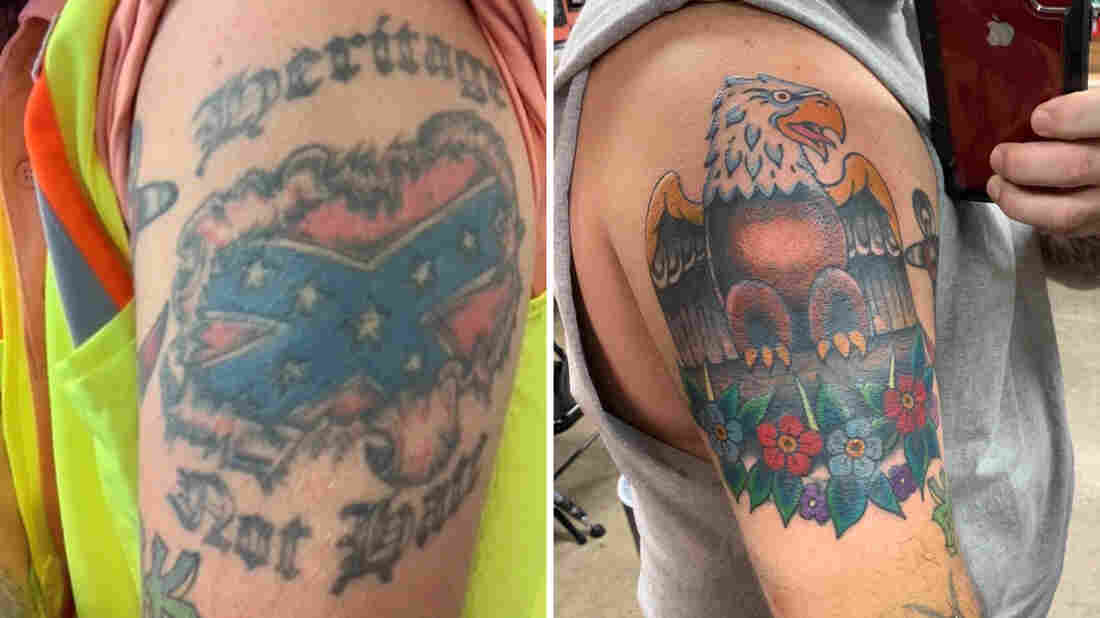 Kyle Boykin got his Confederate flag tattoo covered up this year. George Floyd's killing in May was the "initial wow factor moment," he says. Kyle Boykin hide caption 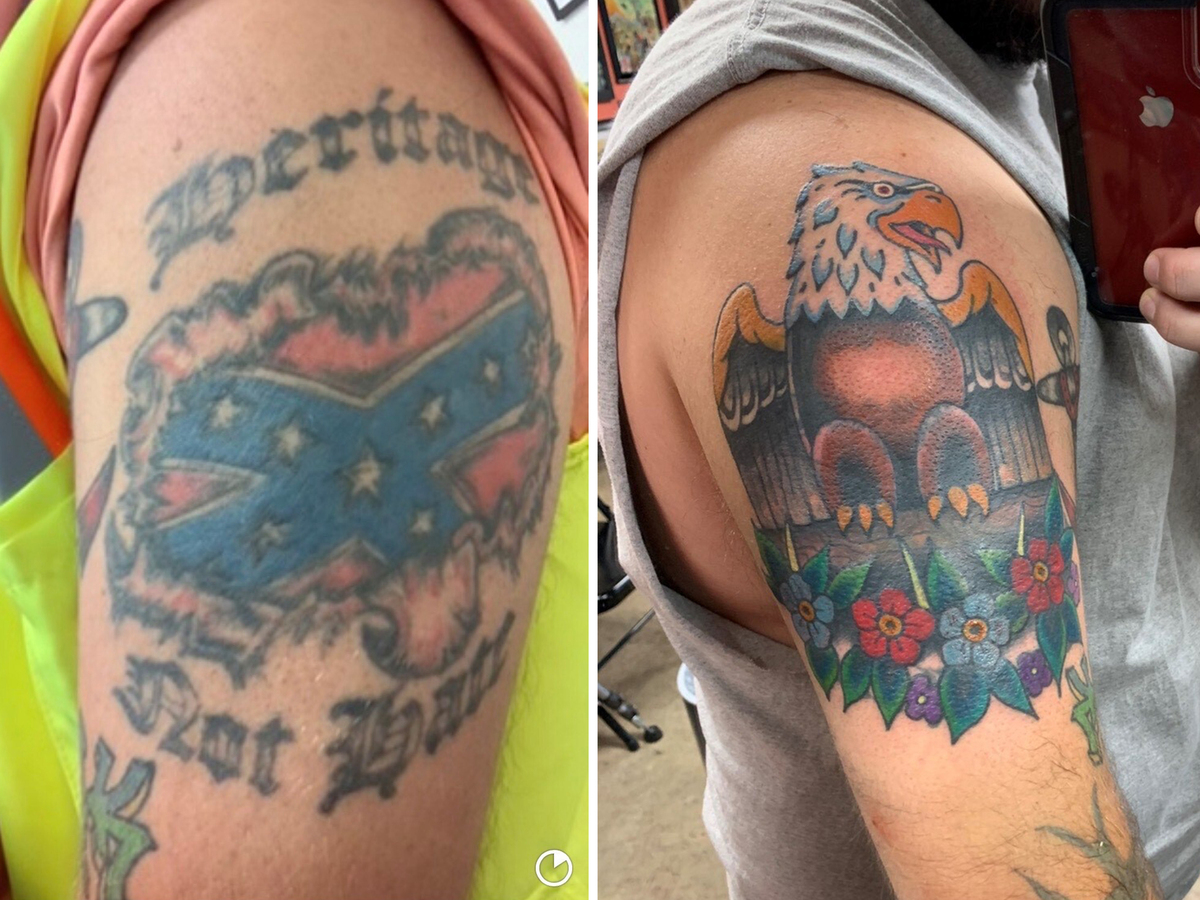 Kyle Boykin got his Confederate flag tattoo covered up this year. George Floyd's killing in May was the "initial wow factor moment," he says.

Several tattoo artists around the country said they've had an uptick in requests to get racist tattoos removed this year, especially in early summer.

The nonprofit Atlanta Redemption Ink, which helps victims of sex trafficking, former gang members and people with self-harm marks, with cover-ups and removals, tells NPR it received an influx of applications specifically from people with racist tattoos.

"We believe that the social justice movement of 2020, along with true heart-change and desire to see hate erased is what has pushed that influx," says Jessica Lamb, executive director and founder of the organization.

In multiple countries, the Erasing Hate platform is behind a larger movement to expose and remove racist symbols in all forms — from public spaces to now, private ones.

Corey Fleischer started the movement in his hometown of Montreal, Canada, about 10 years ago when he removed a swastika from his neighborhood. "It started off as a graffiti removal movement where basically people would notify us of any graffiti or any markings of any sort of hate, anywhere around the world," he says.

Fleischer and his team often power-wash or pour concrete over hateful symbols in public. But as the racial justice movement gained traction, he started hearing more and more from people who wanted to get their racist tattoos covered up.

"It all started with the murder of George Floyd," he says. "It was like the gates opened and it went from a few Confederate tattoo removals over the years to, I would open up my phone every few hours and it would be somebody else messaging me. 'Hey, Erasing Hate, I have a Confederate flag. Can you help us erase it?' "

With tattoos, Fleischer doesn't do the removals himself. He serves as a middleman, connecting those requesting the service to tattoo artists in his network.

"I don't care what your backstory is," Fleischer says. "I care about tomorrow. You want to erase it, I'm going to be there for you. I'm going to set it up for you. And we're just going to move forward and I'm going to give you a new way in life." 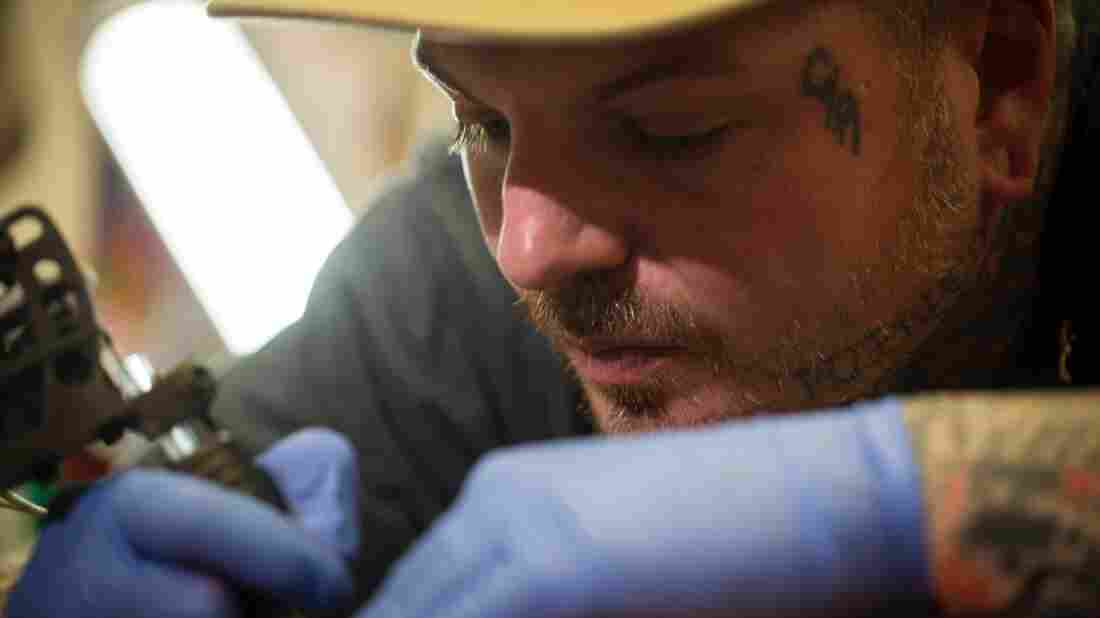 Billy White says the past year was a wake-up call to "the atrocities that our brothers and sisters are facing every day." Cy Dodson hide caption 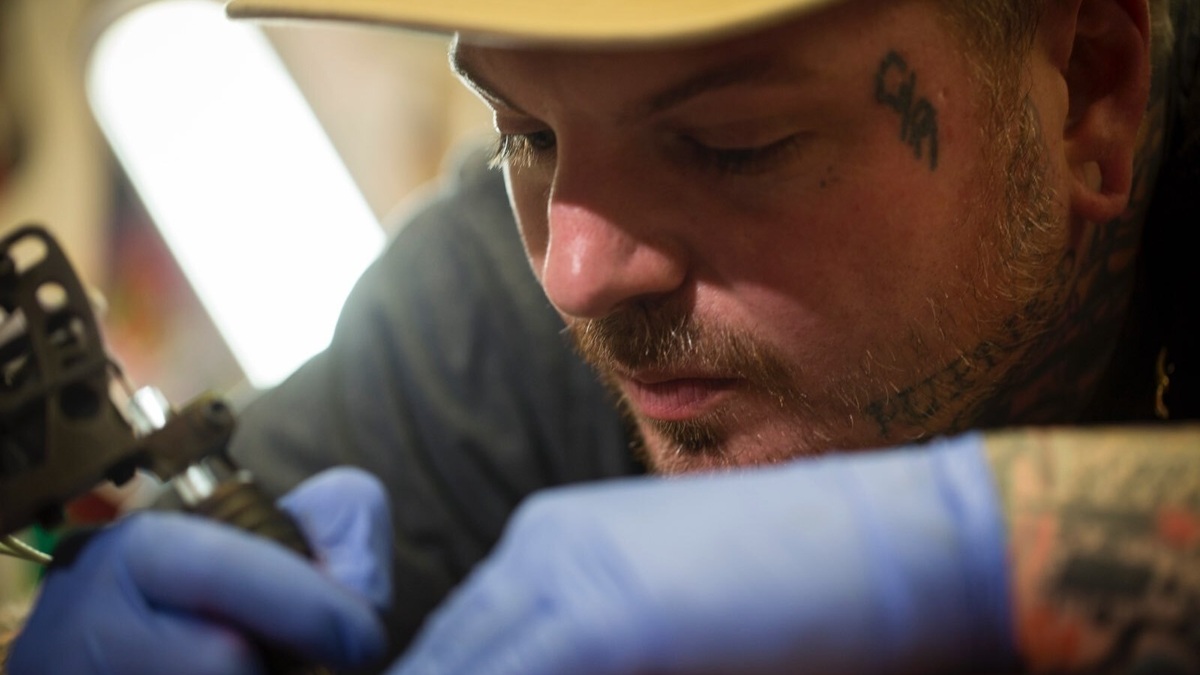 Billy White says the past year was a wake-up call to "the atrocities that our brothers and sisters are facing every day."

Enter Billy White, the owner of Red Rose Tattoo in Zanesville. He's been tattooing for 16 years. He's the tattoo artist Fleischer works with most closely.

White started doing cover-ups a few years ago. For him, the turning point was the 2017 white supremacist rally in Charlottesville, Va. A man who identified as a neo-Nazi drove his car into a crowd of peaceful protesters, killing one person and injuring 35.

"The Unite the Right rally was what I consider to be like a tipping point," White says. "There was a loss of innocent life and the person that drove into that crowd was from Ohio. I knew that it was something that I had to do to kind of change the narrative. I didn't want Ohio to be known as the state with all the crazy racists and the people who are willing to kill for their ideology."

But he quickly realized he needed a vetting process. White says he didn't want to "veil white supremacy or hide it in any kind of way." He wanted to make sure the clients had genuinely moved on from their racist ideologies.

He started getting to know his clients, some over the course of one or two years before committing to cover up their tattoos. White says not everyone who requests a cover-up is truly reformed.

But this year, he says, more people seemed to be having a similar awakening as he had a few years ago.

"I think that if this year didn't wake you up to the atrocities that our brothers and sisters are facing every day, then I don't know what will."

His clients range from people formerly in white supremacist groups, including the KKK, to people who were forced to get tattoos while they were incarcerated.

Others are like Kyle Boykin, who made a one-time decision he regrets.

Boykin lives across town from Red Rose Tattoo. Shortly after protests in Zanesville began, Boykin went in to have White improvise a fierce bald eagle perched on a log with colorful flowers beneath it.

"Once that got covered up, it was like the relief of a community taking down a statue and moving forward," Boykin says. "And getting that covered up was a personal growth, moving forward for myself. And I have this beautiful piece now that I can show people."