Accessibility links
Colville Reservation And COVID-19: 'Last Hurrah' To Keep The Pandemic At Bay Colville Reservation's council has been doing its best to insulate the north central Washington tribe from the coronavirus. But borders are fluid, so the community's precautions haven't been enough. 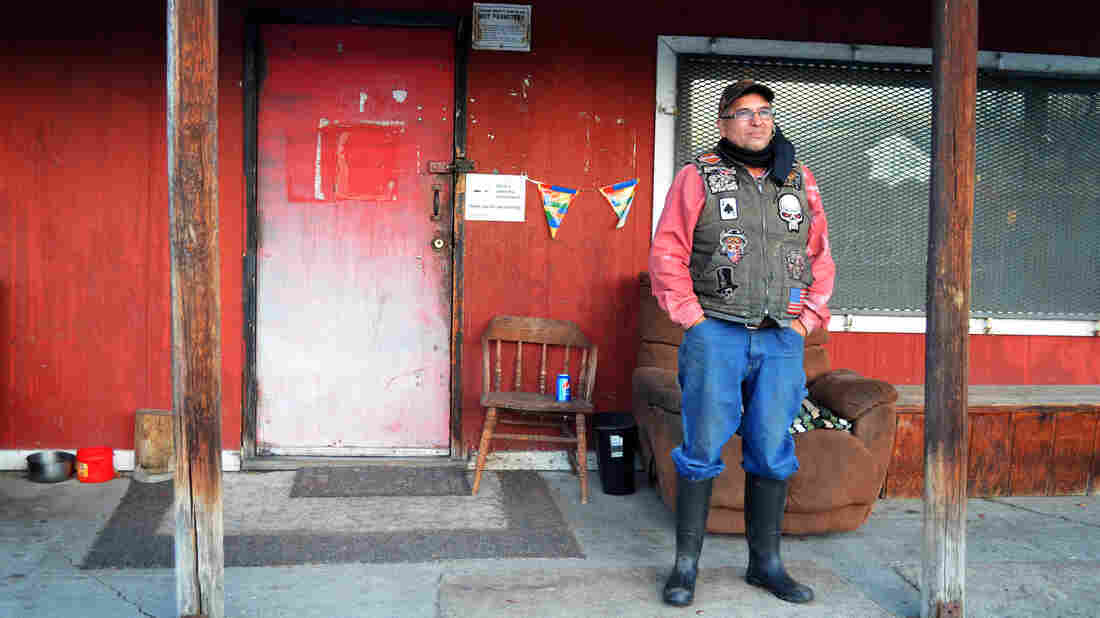 Gary Carden, 63, has owned and managed Nespelem's only tavern for about 25 years. Earlier this year, he spent a month in the hospital with COVID-19. Eilis O'Neill/Eilis O'Neill hide caption 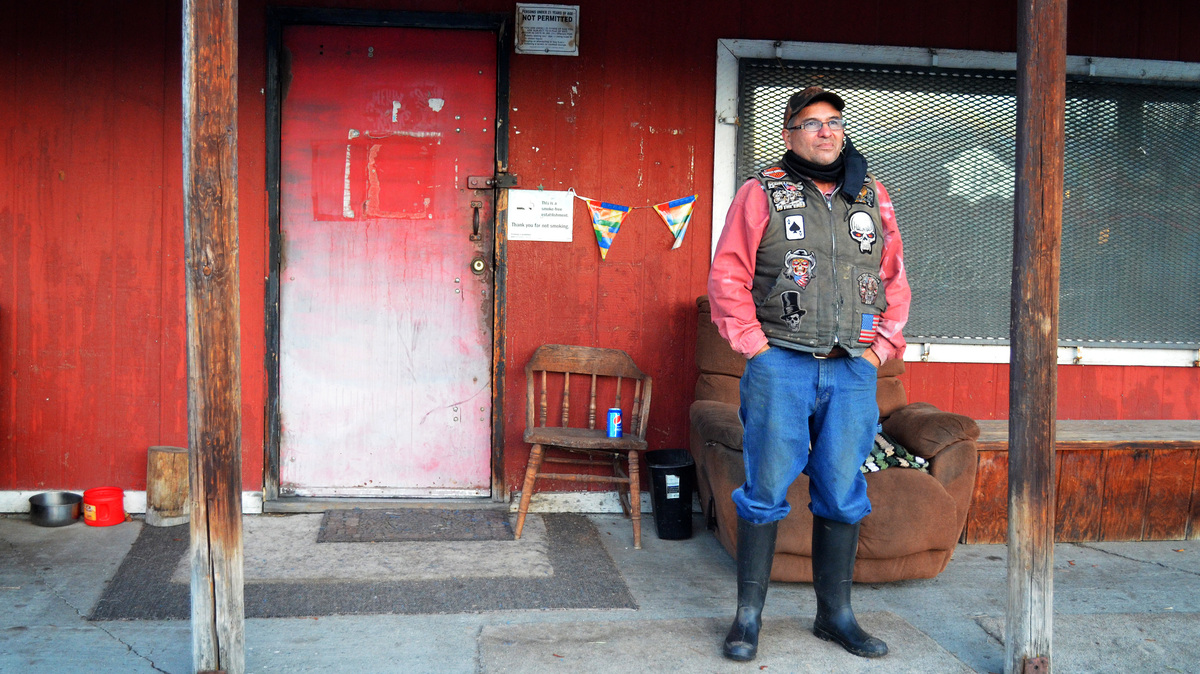 Gary Carden, 63, has owned and managed Nespelem's only tavern for about 25 years. Earlier this year, he spent a month in the hospital with COVID-19.

Gary Carden sits on the reclining chair in front of the tavern he's owned and managed for two and half decades in the north central Washington town of Nespelem, on the Colville Reservation. The 63-year-old is on the concrete porch with his two dogs, Sissy and Harold.

"She's the older dog," he says, "and that's probably the best thing that happened to her is finding her a small buddy, 'cause he's so active and keeps her active."

Carden's normally active too, not just running the tavern but riding horses and motorcycles. But, one day this past June, he felt out of breath and exhausted.

"And my sister came walking in," Carden recalls. "And she says, 'God, brother, you don't look good. Do you want me to call the ambulance?' " He replied, "Yeah, I think you better. There's something wrong."

Carden thought he had heat exhaustion. But it was COVID-19. He was transferred to a hospital about 100 miles away, in the city of Wenatchee, Wash.

He spent a month there — a week of that time on a ventilator.

"It's tough," Carden remembers. "It was tough. I was even ready to give up."

The Colville Tribal Council has been doing its best to insulate its community from the pandemic.

In mid-March, the council closed the reservation to non-essential travel. And, when members tested positive for the coronavirus, the council helped them isolate by providing portable toilets, mobile homes and even hotel rooms as needed.

But COVID-19 cases are hitting record highs throughout the state. And the reservation's borders are fluid, so even the tribe's extensive precautions haven't been enough to fully protect Colville members. About 300 people on the Colville Reservation have tested positive for the coronavirus.

That's a big hit for a small community of 5,000 people. The infection rate on the reservation is twice that of Washington state's most populous county.

"We got hit so hard," says Larry Smith, a doctor on the reservation who runs two of its four clinics.

Smith says it was scary to see so many COVID-19 patients.

"Probably 80% of the people that I see have some risk factors — whether it's hypertension, diabetes, or autoimmune disease," he says.

To Smith, the numbers have been overwhelming.

"For six weeks, we were seeing four to five cases every single day," he says.

Vice-chair of the tribal council Joel Boyd says when cases are up in neighboring communities, it's difficult hard to keep the virus out.

'Hold Their Feet To the Fire': Getting A COVID-19 Vaccine To Hard-Hit Indian Country

"When you do go off-reservation, there's communities that almost pride themselves on not wearing masks, and it's a serious danger," he says.

The current outbreak started when a group of about 10 people from the Colville Reservation went to a nearby town in mid-November, before Washington state's governor closed indoor dining again.

"Everyone was getting in their last little hurrah, I guess you would call it," Boyd says. "And unfortunately, that was all it took for us to get a nice little outbreak."

Many people on the reservation live in large, multi-generational households, so the virus spreads rapidly within families.

To try to contain the reservation's current outbreak, the tribal council took a new step: It imposed a curfew to try to keep people from gathering after work.

"A lot of people that have got it recently — they're being pretty vocal about, you know, how they got it and that they're sorry for spreading it," Boyd says. "And I'm thankful that they're sharing that to prevent it from happening again."

The CDC Doesn't Know Enough About Coronavirus In Tribal Nations

Boyd says people telling their stories about how they got infected is an important way to spread the word on the reservation about need to take precautions.

Tavern owner Gary Carden says he often shares the story of how he almost died so others on the reservation can learn from what happened to him.

Carden says that during his time in the hospital, "I even told them doctors, you know, 'Hey, I quit. Pull these tubes out.' "

A young intern sat down at his bedside and gave him a pep talk.