Accessibility links
What Supreme Court's New Conservative Supermajority Means For Abortion Rights There are two schools of thought: either the right to abortion will be systemically hollowed out, leaving it a right on paper only, or Roe will be overturned. 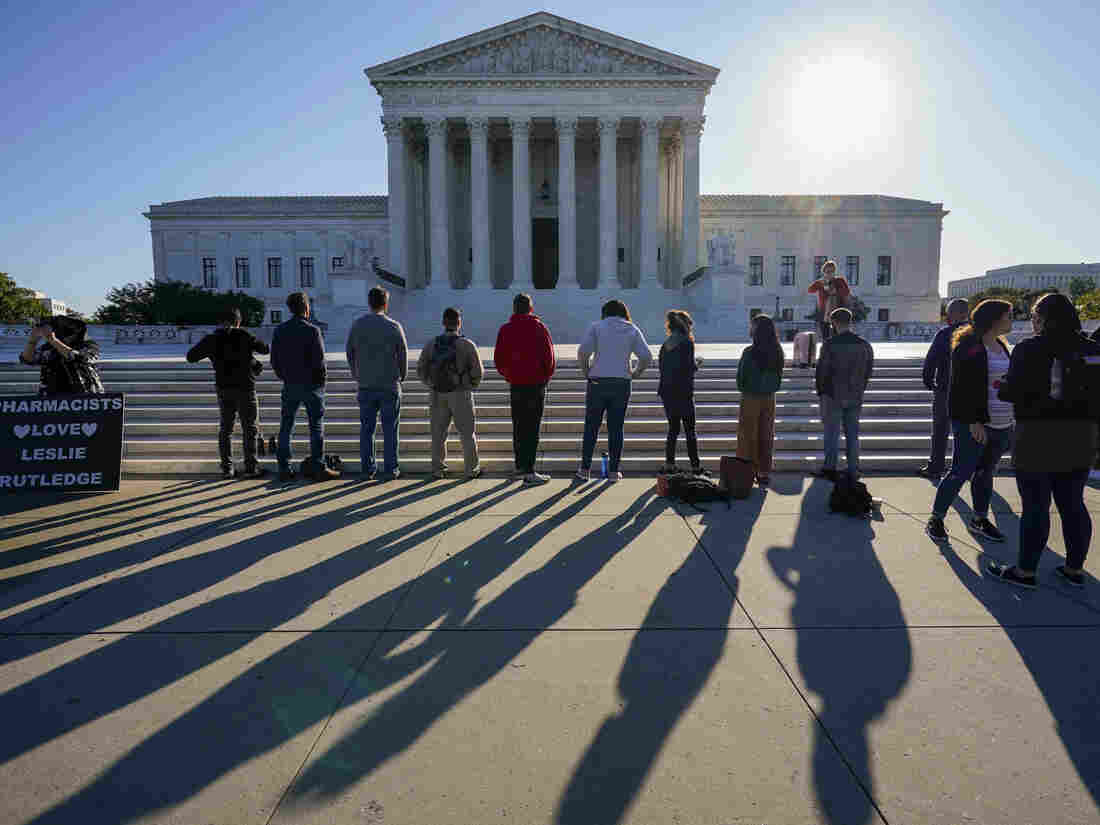 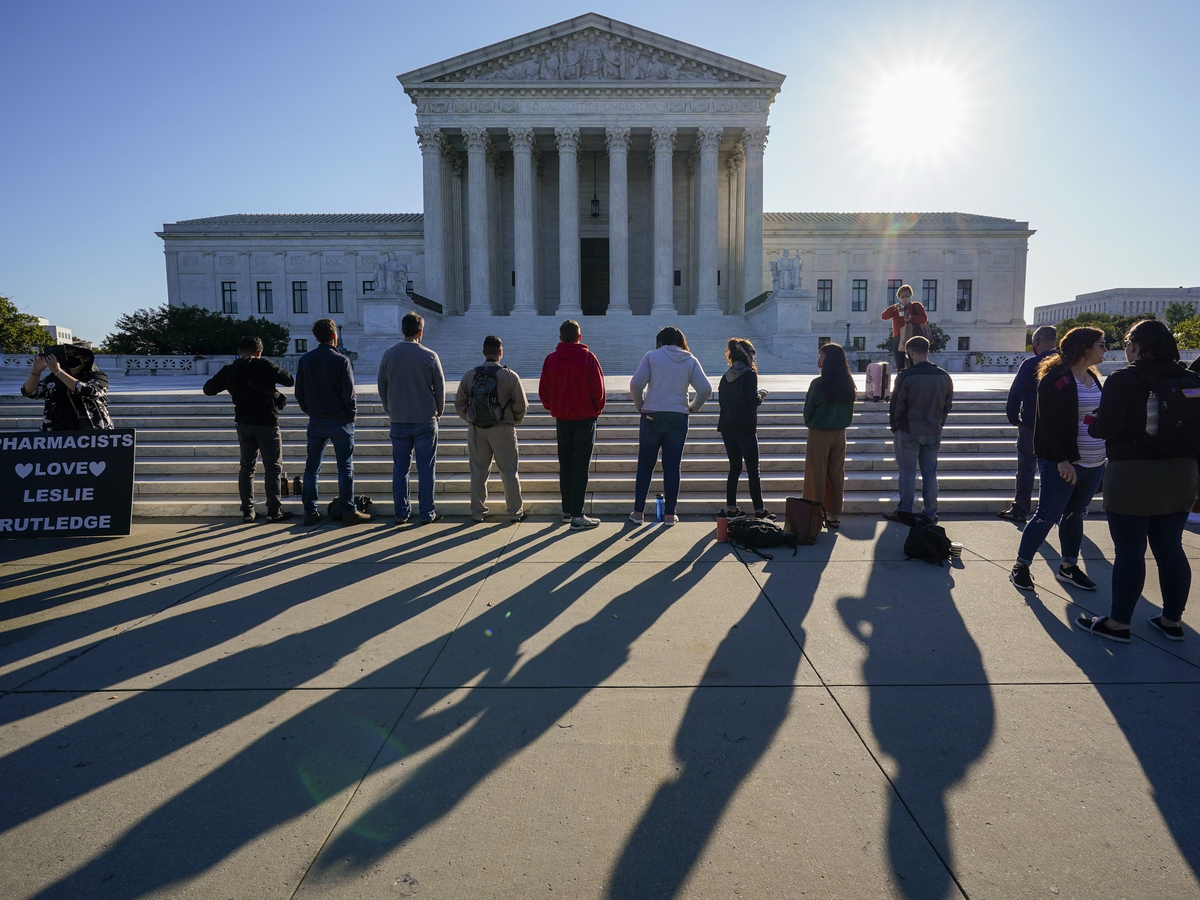 Anti-abortion rights activists demonstrate at the Supreme Court in Washington on Oct. 5. The court's new conservative supermajority puts the fate of Roe v. Wade in doubt.

For the first time in nearly a half century, there is a six-justice conservative supermajority on the U.S. Supreme Court — six justices with clearly expressed views against abortion rights. So, will a woman's constitutional right to terminate a pregnancy soon be a thing of the past?

In 1973, when the court issued its landmark Roe v. Wade opinion, the vote was 7-to-2, with five Republican-appointed justices in the majority. But since then, the court's composition has moved inexorably to the ideological right, with the court's three newest justices appointed by President Trump.

At the same time, however, public opinion polls have showed large majorities supporting abortion rights in most cases. Those approval ratings have remained remarkably stable over the years.

On the Supreme Court, however, the centrist conservatives are gone, replaced by justices more passionately opposed to the notion of a constitutional right to abortion. So the question now is: How fast and how far does the court want to move.

Among constitutional scholars, there are basically two schools of thought. Many expect the court to systematically hollow out Roe v. Wade, not explicitly overturning it but leaving it a right on paper only.

It will be "like this sarcophagus of Roe that you have outside the tomb, but there's nothing inside, just an empty shell," predicts professor Josh Blackman, of South Texas College of Law Houston.

"I think the galvanizing view within the pro-life movement is that the time has come to call the question," she says. "Why wouldn't you do it now when you have a 6-to-3 supermajority?"

"It is a new moment for the court," adds Mallory Quigley, a vice president of the anti-abortion rights Susan B. Anthony List. "What the pro-life movement is doing is throwing every type of spaghetti at the wall and seeing what sticks."

Anti-abortion rights forces are in fact prevailing in many state legislatures, enacting lots of different laws that restrict abortion rights. As of now, there are four cases challenging those laws pending before the Supreme Court and more than a dozen cases pending in the federal appeals courts.

Some of those appeals in the lower courts have remained undecided for as many as 2 1/2 years, suggesting that some conservative-dominated lower courts are slow-walking cases in hopes of a dramatic change in abortion rulings from the Supreme Court.

Among the restrictions involved in these cases are bans on abortions at early stages of pregnancy, with six states banning abortions after six weeks. That's before many women even realize they are pregnant. Then, too, are bans on the most common method of surgical abortions. There are laws making it more difficult to obtain medical abortions using pills. There are laws making it illegal to terminate a pregnancy because of fetal abnormalities, including Down syndrome. And there are laws aimed at making it difficult to impossible for clinics that perform abortions to remain open.

"What we're ultimately hoping for is that the Supreme Court will take the handcuffs off state legislatures and allow them to enact laws that are truly reflective of the values of the people in those states," says Quigley of the SBA List.

Abortion-rights lawyers like Stephanie Toti know they are facing an uphill battle.

"Roe v. Wade has been settled precedent for nearly 50 years and yet everybody thinks that we might be on the cusp of that precedent being overturned," she says, adding it's "really important to keep up the fight," especially because the "perspective that often gets lost" is of people like the woman who suddenly finds herself pregnant and needing an abortion, only to discover that clinics are now closed.

If the direction the conservative court is embarking on abortion is clear, it is less clear how the conservative justices will get there. NYU professor Murray points to an idea promoted in one opinion written by Justice Clarence Thomas that sought to link Planned Parenthood, contraception and abortion to the racist views of the eugenics movement in the early 20th century.

Though Thomas wrote only for himself in that case, Murray points out that other conservative justices last year relied on the racist roots of laws permitting non-unanimous jury verdicts to strike them down. And she sees those opinions as "opportunistically" laying the groundwork for a different approach to reversing Roe.

"What could be better than to take down Roe on the ground that it is not just wrong in terms of your moral view of where life begins, but it's wrong because it's about racial injustice?" Murray says.

Even a year ago, the justice who would have pushed back most forcefully against that theory would have been the modern era's foremost advocate for women's legal rights and personal autonomy, Justice Ruth Bader Ginsburg. Her death just three months ago, and Trump's appointment of Amy Coney Barrett to replace her, however, have solidified the conservative supermajority on the court.

And if you look carefully, as professor Murray observes, anti-abortion groups now routinely refer to laws banning abortion because of fetal abnormality as "anti-discrimination laws."

A previous version of this story incorrectly said there are six cases challenging state laws related to abortion pending before the Supreme Court. There are currently four.