Accessibility links
'The Great Gatsby,' 'Mrs. Dalloway' And Other 1925 Works Enter The Public Domain Every year on January 1, the copyright on thousands of books, songs, films and other creative works expires. Law professor Jennifer Jenkins says 2021 is "a bumper crop." 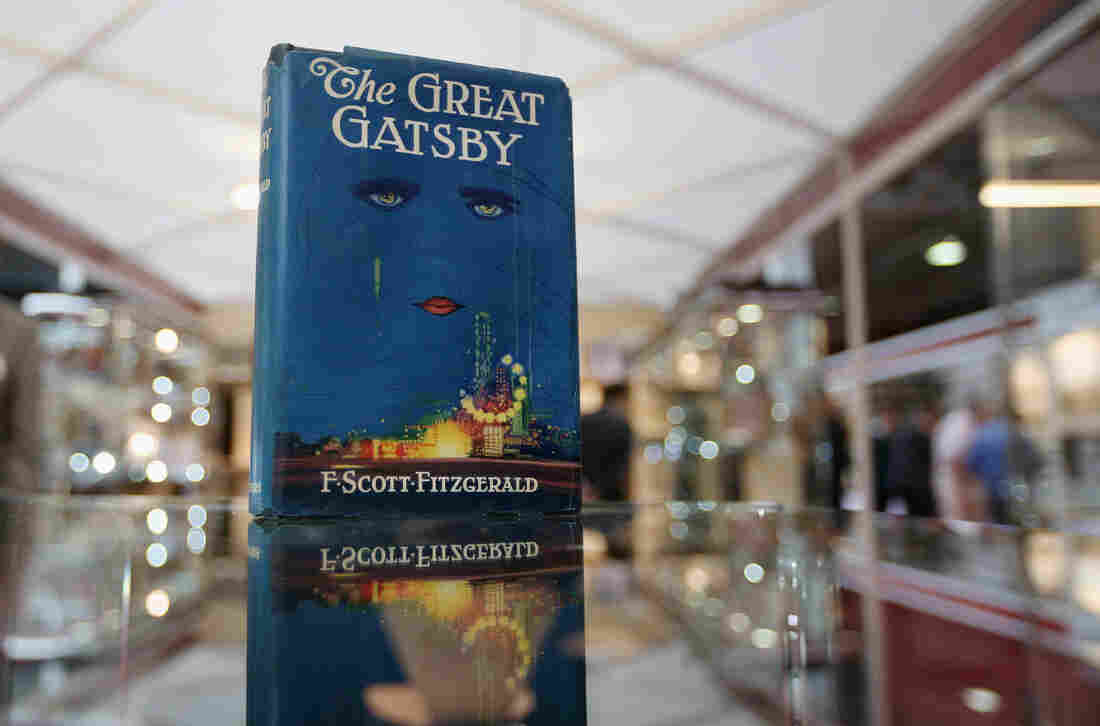 F. Scott Fitzgerald, Virginia Woolf, Ernest Hemingway, Franz Kafka and many more authors and artists have 1925 works entering the public domain on January 1. Above, a first edition of The Great Gatsby at the London International Antiquarian Book Fair in London in 2013. Oli Scarff/Getty Images hide caption 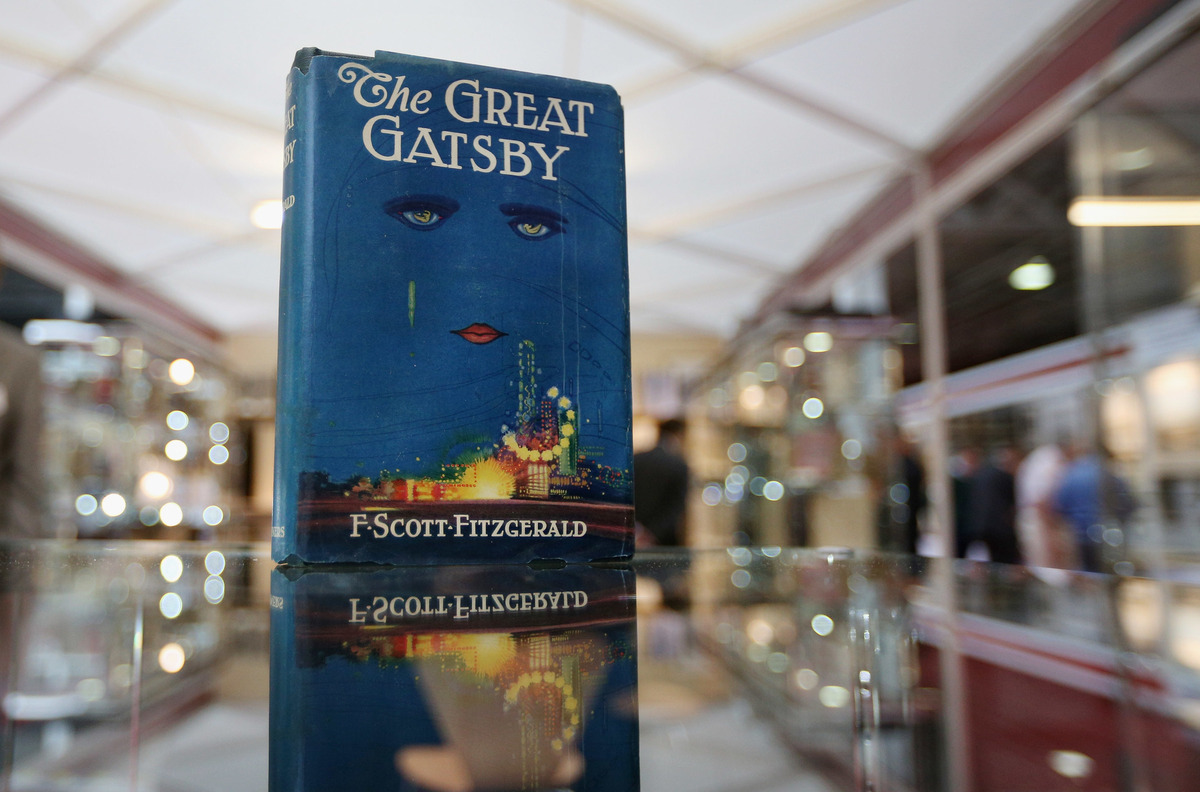 F. Scott Fitzgerald, Virginia Woolf, Ernest Hemingway, Franz Kafka and many more authors and artists have 1925 works entering the public domain on January 1. Above, a first edition of The Great Gatsby at the London International Antiquarian Book Fair in London in 2013.

What a year it was for Anglo-American literature and the arts!

As of today, every single one of those works has entered the public domain. "That means that copyright has expired," explains Jennifer Jenkins, a law professor at Duke University who directs its Center for the Study of the Public Domain. "And all of the works are free for anyone to use, reuse, build upon for anyone — without paying a fee."

On January 1 every year, a new batch of published works is liberated from the constraints of copyright. (For a long time, copyright expired after 75 years, but in 1998, Congress extended the date of copyright expiration for works published between 1923 and 1977 to 95 years.) It's difficult to overstate the importance of having work in the public domain. For example, can you imagine the holidays without It's A Wonderful Life? That movie happened to be unprotected by copyright, so it was able to be shown — a lot — for free, contributing to its establishment as an American Christmas classic.

It also means books can be published more cheaply and made available for free online; that old "orphan" films can be preserved by archivists; that scholars can access and publish material more easily; that musicians can sample and experiment with the songs of an earlier generation and that classic characters can be given new life and new interpretations.

While the most successful creators often leave behind legal estates to manage the care (and finances) of their famous books, plays, operas and so forth, most aren't so lucky. "For the vast majority of authors from 1925, no one is benefiting from copyright protections," Jenkins tells NPR. Having their work enter the public domain is a way to keep it circulating in the culture for artists and historians to use for education and inspiration.

In an article about this year's Public Domain Day, Jenkins discusses everything from the changes in length of copyright to a fascinating story about the copyright of Hitler's Mein Kampf, which also enters the public domain this year. (A dizzyingly exhaustive list of works from 1925 now in the public domain can be found here.)

"What a bumper crop!" Jenkins exults. Besides the marquee names traditionally lionized by the literary estalishment, she is quick to point out, there's rich, unplumbed material especially useful to scholars of marginalized communities. And to be able to use and interpret these works — to put them in dialogue with contemporary thoughts and ideas — what a legacy of artistry and inspiration, says Jenkins, with which to begin 2021.

Below, you can peruse a selection of works entering the public domain today, hand-picked by Jenkins:

The Great Gatsby by F. Scott Fitzgerald
Mrs. Dalloway by Virginia Woolf
In Our Time by Ernest Hemingway
The Trial (in German) by Franz Kafka
An American Tragedy by Theodore Dreiser
Manhattan Transfer by John Dos Passos
The New Negro edited by Alain Locke (collecting works from writers including W.E.B. du Bois, Countee Cullen, Langston Hughes, Zora Neale Hurston, Claude McKay, Jean Toomer and Eric Walrond)
Arrowsmith by Sinclair Lewis
The Secret of Chimneys by Agatha Christie
Those Barren Leaves by Aldous Huxley
The Painted Veil by W. Somerset Maugham
On the Trail of Negro Folk-Songs by Dorothy Scarborough
The Writing of Fiction by Edith Wharton
A Daughter of the Samurai by Etsu Inagaki Sugimoto

"Always," by Irving Berlin
"Sweet Georgia Brown," by Ben Bernie, Maceo Pinkard and Kenneth Casey
Works by Gertrude "Ma" Rainey, the "Mother of the Blues," including "Army Camp Harmony Blues" (with Hooks Tilford) and "Shave 'Em Dry" (with William Jackson)
"Looking for a Boy," by George and Ira Gershwin (from the musical Tip-Toes)
"Manhattan," by Lorenz Hart and Richard Rodgers
"Ukulele Lady," by Gus Kahn and Richard Whiting
"Yes Sir, That's My Baby," by Gus Kahn and Walter Donaldson
Works by "Jelly Roll" Morton, including "Shreveport Stomp" and "Milenberg Joys" (with Paul Mares, Walter Melrose and Leon Roppolo)
Works by W.C. Handy, including "Friendless Blues" (with Mercedes Gilbert), "Bright Star of Hope" (with Lillian A. Thorsten) and "When the Black Man Has a Nation of His Own" (with J.M. Miller)
Works by Duke Ellington, including "Jig Walk" and "With You" (both with Joseph "Jo" Trent)
Works by "Fats" Waller, including "Anybody Here Want To Try My Cabbage" (with Andy Razaf), "Ball and Chain Blues" (with Andy Razaf), and "Campmeetin' Stomp"

... plus many, many more. You can find Jenkins' full list here, and the exhaustive list of works here.)

A previous version of this story incorrectly stated that Congress pushed the date of copyright expiration from 75 years to 97 years in 2001. In fact, the Copyright Term Extension Act was passed in 1998 and extended copyright for certain works, including those from 1925, to 95 years.