Accessibility links
Some Health Care Workers Are Hesitant About Getting COVID-19 Vaccines Dr. Nikhila Juvvadi, chief clinical officer at a Chicago hospital, says about 40 percent of the staff distrust the vaccines — in part because of deep-rooted cultural mistrust based on past abuses. 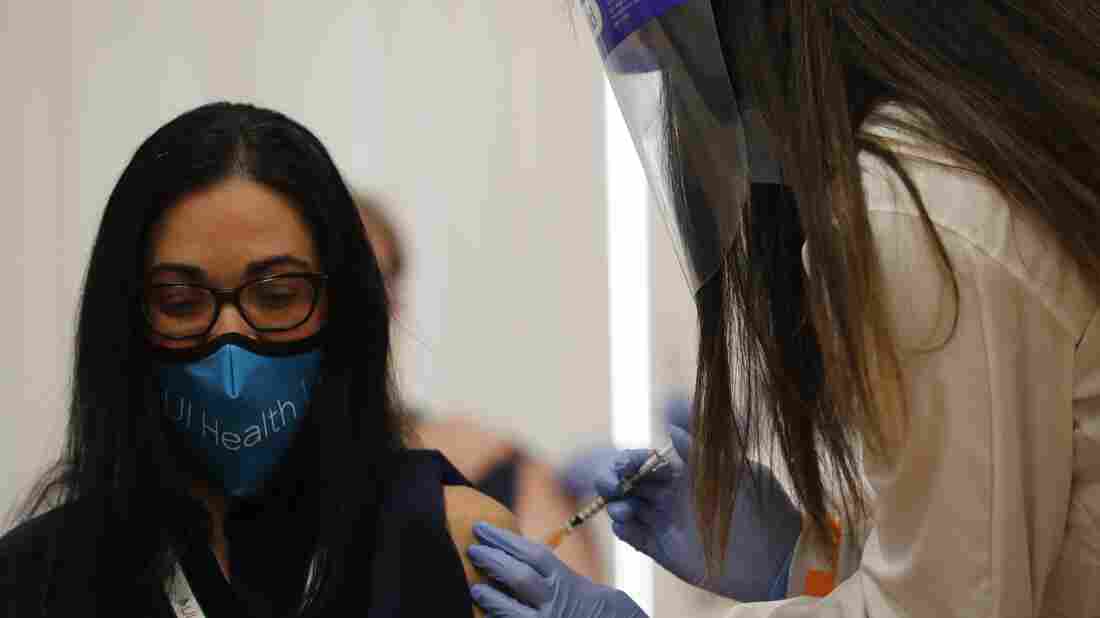 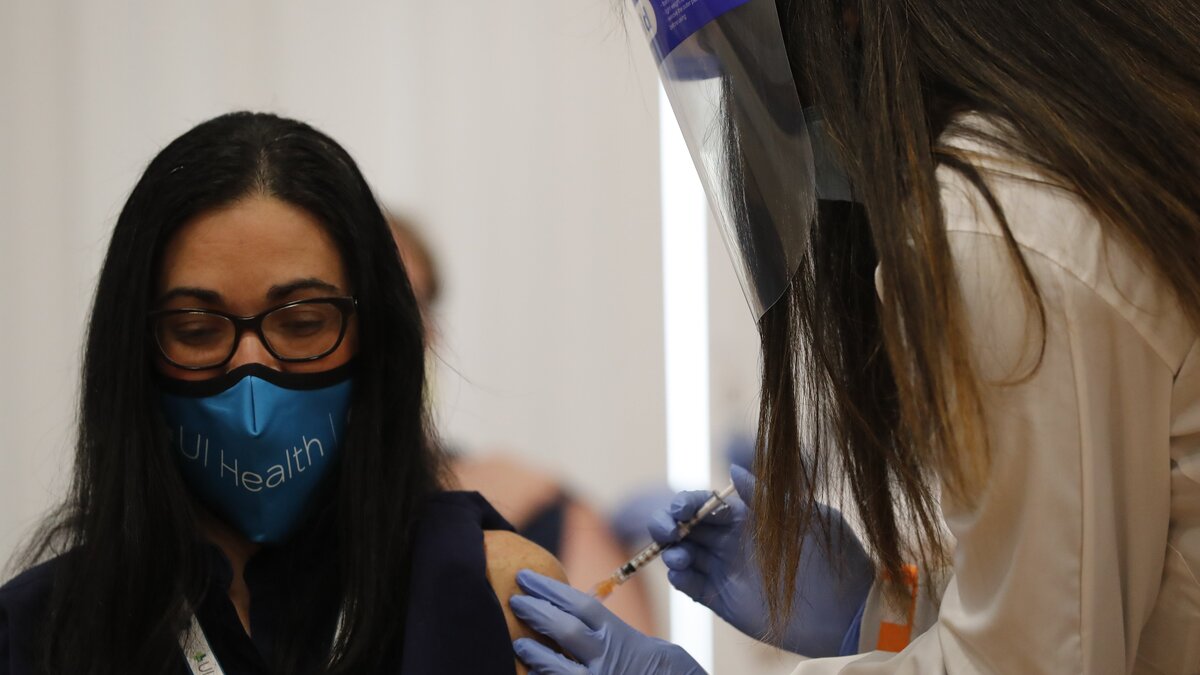 Dr. Nikhila Juvvadi gives Dr. Marina Del Rios from the University of Illinois Hospital & Health Sciences System one of the first COVID-19 vaccination administered in Chicago on Dec. 15 at Loretto Hospital on the city's West Side.

But while they have priority around the country, not every eligible health care worker actually wants to get the vaccine. A recent survey by Kaiser Family Foundation found that nearly a third probably or definitely would refuse vaccination.

Juvvadi says that, in her hospital, a lot of that hesitancy is based on minority groups' deep-rooted mistrust of vaccinations and other large-scale health care programs: "I've heard Tuskegee more times than I can count in the past month — and, you know, it's a valid, valid concern."

She spoke with All Things Considered's Ailsa Chang about the concerns among her colleagues and in her community, and the steps her hospital is taking to address them.

On the feelings of the staff at Loretto Hospital, in a majority-Black community on Chicago's West Side

We did a survey right before the vaccine came out ... basically as to where you work in the hospital, and would you or would you not get the vaccine when it is your turn? We came up with, 60 percent said yes, and 40 percent actually said no.

There's a lot of different factors, but there's some things [that] are reasonable. ... Pregnant women or breastfeeding women can say that there's not enough research. So those type of things I tend to understand. But then there's a wider hesitancy that almost is not rooted in the available science. ...

In the African-American population and to some extent in the Latino population, there are reasons for this. ... There's no transparency between pharmaceutical companies or research companies — or the government sometimes — on how many people from those communities were actually involved in the research. So they have — they have an issue with that.

And then, they have also heard the word "guinea pig." ... That community was used, unfortunately, as guinea pigs — whether it was Tuskegee, whether it was Henrietta Lacks' cells being used without her permission. That caused them to have this mistrust. So what we want and need to do is figure out how to move forward with that.

We've had town halls answering questions of every kind, whether it's "what is an mRNA vaccine," "what is the difference between one [vaccine] and the other," "be honest about the side effects" ... "why did they get the vaccine out in nine months when otherwise it takes 15 years?" And I tell them the answers to those questions very honestly and very transparently.

But the one thing I will tell you that has really worked is one-on-one conversations. So it usually goes something like, "Hey, what are your concerns?" And the first thing you have to do is listen to those concerns — do not dismiss them. And then explain and answer those questions to the best of your ability.

The second thing that I've seen that works is to introduce them to somebody of their same race or gender or age group and say, "Look, this person took it a week ago, this person took it two days ago — why don't you both sit there for a minute and talk to each other, and maybe she had the same concerns as you."

We need to have built in safety nets for that — meaning, OK, we are going to give somebody 100 doses of the vaccine. Let's say only 60 of their workers take it. Who would they partner with that if ... their staff don't take it, we give it immediately to those other people.

That takes so much logistics and planning that I can't even imagine how massive a task that is. But with the vaccine hesitancy that is going on right now, we are going to end up with wasted doses if we don't do that.

Concerns about the limited information available about future vaccine distribution

We've absolutely been able to get all the shots that we've requested so far, it's just that we're trying to play it slightly safe ... We think that the next doses will definitely come — the city reassures us that they will — but it's not the city we're worried about, it's kind of the national distribution when we see it across the country that we worry about, right? And so maybe do we have to save enough for the second dose? The city reassures us that we don't, but it's still something that plays in the back of our head.